Two of the active-duty U.S. soldiers who wrote a controversial Op-Ed in the New York Times questioning the direction of the Iraq war died Monday in Baghdad. Here are their words. 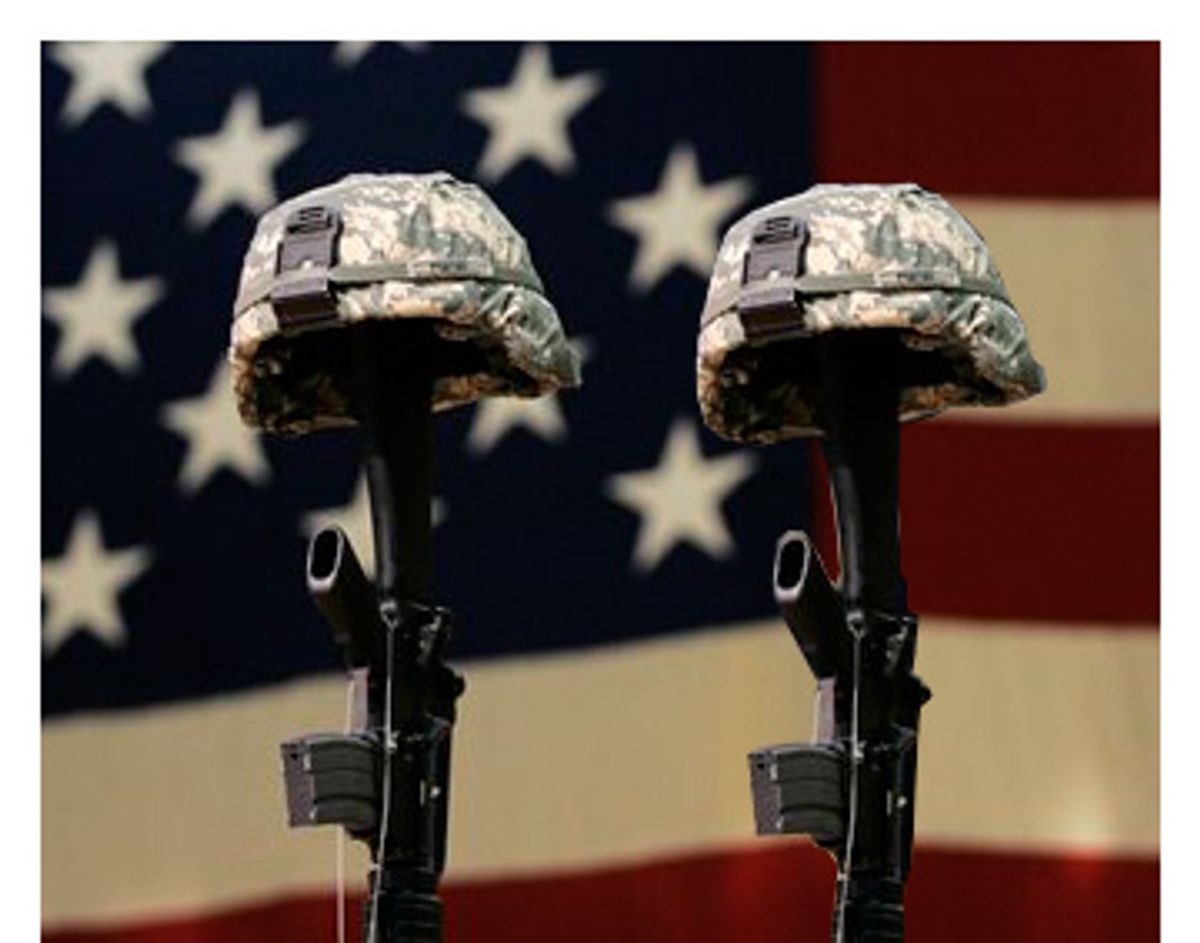 BAGHDAD -- Viewed from Iraq at the tail end of a 15-month deployment, the political debate in Washington is indeed surreal. Counterinsurgency is, by definition, a competition between insurgents and counterinsurgents for the control and support of a population. To believe that Americans, with an occupying force that long ago outlived its reluctant welcome, can win over a recalcitrant local population and win this counterinsurgency is far-fetched. As responsible infantrymen and noncommissioned officers with the 82nd Airborne Division soon heading back home, we are skeptical of recent press coverage portraying the conflict as increasingly manageable and feel it has neglected the mounting civil, political and social unrest we see every day. (Obviously, these are our personal views and should not be seen as official within our chain of command.)

The claim that we are increasingly in control of the battlefields in Iraq is an assessment arrived at through a flawed, American-centered framework. Yes, we are militarily superior, but our successes are offset by failures elsewhere. What soldiers call the "battle space" remains the same, with changes only at the margins. It is crowded with actors who do not fit neatly into boxes: Sunni extremists, Al Qaeda terrorists, Shiite militiamen, criminals and armed tribes. This situation is made more complex by the questionable loyalties and Janus-faced role of the Iraqi police and Iraqi Army, which have been trained and armed at United States taxpayers' expense.

A few nights ago, for example, we witnessed the death of one American soldier and the critical wounding of two others when a lethal armor-piercing explosive was detonated between an Iraqi Army checkpoint and a police one. Local Iraqis readily testified to American investigators that Iraqi police and Army officers escorted the triggermen and helped plant the bomb. These civilians highlighted their own predicament: had they informed the Americans of the bomb before the incident, the Iraqi Army, the police or the local Shiite militia would have killed their families.

As many grunts will tell you, this is a near-routine event. Reports that a majority of Iraqi Army commanders are now reliable partners can be considered only misleading rhetoric. The truth is that battalion commanders, even if well meaning, have little to no influence over the thousands of obstinate men under them, in an incoherent chain of command, who are really loyal only to their militias.

Similarly, Sunnis, who have been underrepresented in the new Iraqi armed forces, now find themselves forming militias, sometimes with our tacit support. Sunnis recognize that the best guarantee they may have against Shiite militias and the Shiite-dominated government is to form their own armed bands. We arm them to aid in our fight against Al Qaeda.

However, while creating proxies is essential in winning a counterinsurgency, it requires that the proxies are loyal to the center that we claim to support. Armed Sunni tribes have indeed become effective surrogates, but the enduring question is where their loyalties would lie in our absence. The Iraqi government finds itself working at cross purposes with us on this issue because it is justifiably fearful that Sunni militias will turn on it should the Americans leave.

In short, we operate in a bewildering context of determined enemies and questionable allies, one where the balance of forces on the ground remains entirely unclear. (In the course of writing this article, this fact became all too clear: one of us, Staff Sergeant Murphy, an Army Ranger and reconnaissance team leader, was shot in the head during a "time-sensitive target acquisition mission" on Aug. 12; he is expected to survive and is being flown to a military hospital in the United States.) While we have the will and the resources to fight in this context, we are effectively hamstrung because realities on the ground require measures we will always refuse -- namely, the widespread use of lethal and brutal force.

Given the situation, it is important not to assess security from an American-centered perspective. The ability of, say, American observers to safely walk down the streets of formerly violent towns is not a resounding indicator of security. What matters is the experience of the local citizenry and the future of our counterinsurgency. When we take this view, we see that a vast majority of Iraqis feel increasingly insecure and view us as an occupation force that has failed to produce normalcy after four years and is increasingly unlikely to do so as we continue to arm each warring side.

Coupling our military strategy to an insistence that the Iraqis meet political benchmarks for reconciliation is also unhelpful. The morass in the government has fueled impatience and confusion while providing no semblance of security to average Iraqis. Leaders are far from arriving at a lasting political settlement. This should not be surprising, since a lasting political solution will not be possible while the military situation remains in constant flux.

The Iraqi government is run by the main coalition partners of the Shiite-dominated United Iraqi Alliance, with Kurds as minority members. The Shiite clerical establishment formed the alliance to make sure its people did not succumb to the same mistake as in 1920: rebelling against the occupying Western force (then the British) and losing what they believed was their inherent right to rule Iraq as the majority. The qualified and reluctant welcome we received from the Shiites since the invasion has to be seen in that historical context. They saw in us something useful for the moment.

Now that moment is passing, as the Shiites have achieved what they believe is rightfully theirs. Their next task is to figure out how best to consolidate the gains, because reconciliation without consolidation risks losing it all. Washington's insistence that the Iraqis correct the three gravest mistakes we made -- de-Baathification, the dismantling of the Iraqi Army and the creation of a loose federalist system of government -- places us at cross purposes with the government we have committed to support.

Political reconciliation in Iraq will occur, but not at our insistence or in ways that meet our benchmarks. It will happen on Iraqi terms when the reality on the battlefield is congruent with that in the political sphere. There will be no magnanimous solutions that please every party the way we expect, and there will be winners and losers. The choice we have left is to decide which side we will take. Trying to please every party in the conflict -- as we do now -- will only ensure we are hated by all in the long run.

At the same time, the most important front in the counterinsurgency, improving basic social and economic conditions, is the one on which we have failed most miserably. Two million Iraqis are in refugee camps in bordering countries. Close to two million more are internally displaced and now fill many urban slums. Cities lack regular electricity, telephone services and sanitation. "Lucky" Iraqis live in gated communities barricaded with concrete blast walls that provide them with a sense of communal claustrophobia rather than any sense of security we would consider normal.

In a lawless environment where men with guns rule the streets, engaging in the banalities of life has become a death-defying act. Four years into our occupation, we have failed on every promise, while we have substituted Baath Party tyranny with a tyranny of Islamist, militia and criminal violence. When the primary preoccupation of average Iraqis is when and how they are likely to be killed, we can hardly feel smug as we hand out care packages. As an Iraqi man told us a few days ago with deep resignation, "We need security, not free food."

In the end, we need to recognize that our presence may have released Iraqis from the grip of a tyrant, but that it has also robbed them of their self-respect. They will soon realize that the best way to regain dignity is to call us what we are -- an army of occupation -- and force our withdrawal.

Until that happens, it would be prudent for us to increasingly let Iraqis take center stage in all matters, to come up with a nuanced policy in which we assist them from the margins but let them resolve their differences as they see fit. This suggestion is not meant to be defeatist, but rather to highlight our pursuit of incompatible policies to absurd ends without recognizing the incongruities.

We need not talk about our morale. As committed soldiers, we will see this mission through.