"In the Valley of Elah"

The first in a rush of fall films that deal with the Iraq war raises a tough question: Is it too soon to make sense of a war we're still fighting? 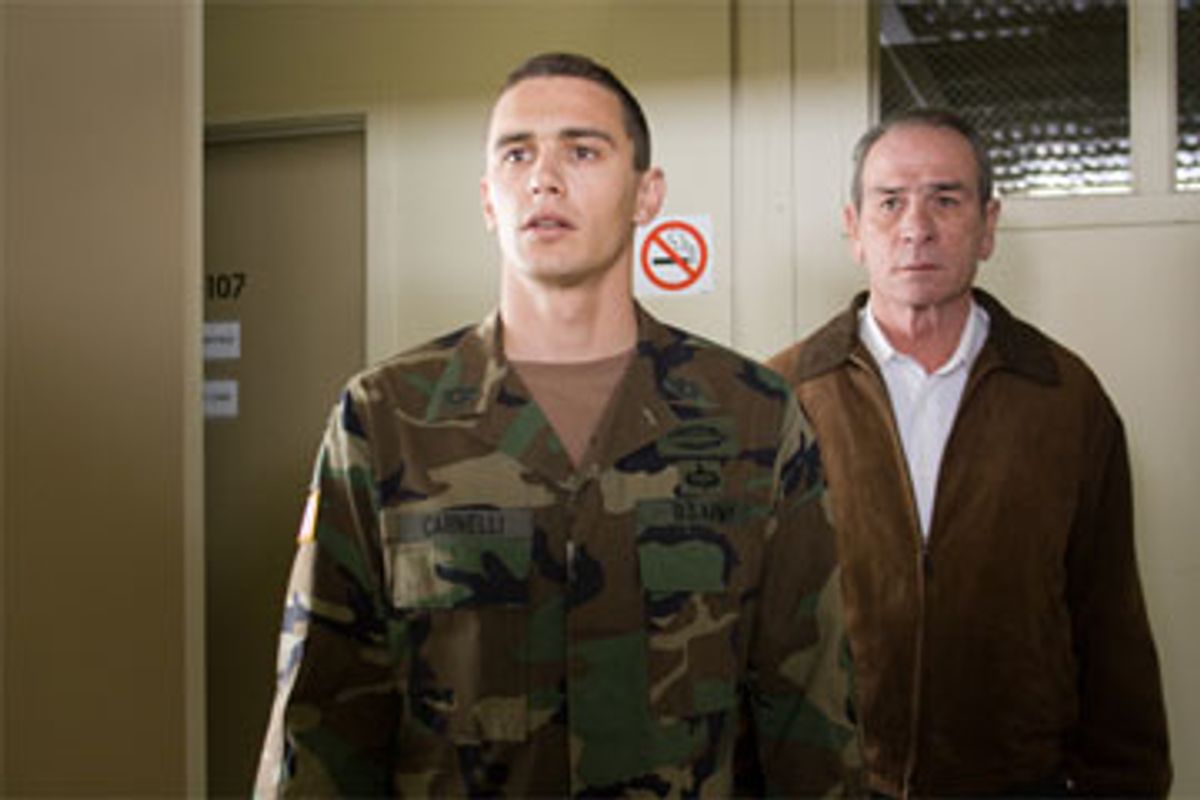 Even a relatively uncomplicated movie can take years to get made, which is why pictures that deal with topical political issues are relatively rare. But perhaps because we're living in an era when we've learned to expect quick, if not instantaneous, turnaround, in the next few months we'll be seeing numerous mainstream pictures that deal in some fashion with the horror and confusion Americans have been feeling, or are beginning to feel, about the war in Iraq. We've already had Michael Winterbottom's unmooring and mournful "A Mighty Heart." Soon we'll be seeing Gavin Hood's "Rendition," with Reese Witherspoon playing an American woman whose Egyptian-born husband has been detained in a secret detention facility in the Middle East. And this week we've got Paul Haggis' "In the Valley of Elah": Tommy Lee Jones plays a career Army officer whose son has mysteriously gone missing after completing a tour of duty in Iraq and returning to his hometown in New Mexico. Charlize Theron is a detective who decides to help him when she realizes the military police have no interest in uncovering the truth behind his disappearance.

In the abstract, I guess we should be glad filmmakers are attempting to respond to the reality of war even as we're in the thick of it. That didn't happen in the Vietnam era, although you could argue that the great filmmakers of the '60s and '70s (Altman, De Palma, Coppola, Scorsese, Penn), and even many lesser ones, were sublimating their political ideas and packing them into their movies in code, which cannier moviegoers could easily unzip. (De Palma himself has just made "Redacted," a confounding, harrowing and raw fiction film based entirely on real-life Iraq war events, but it's not the kind of mainstream, star-driven picture I'm talking about here.)

Does the arrival of movies like "In the Valley of Elah" mean that as a country, we're getting better at facing up to the hell of now, at using popular art to recognize our nation's mistakes even as those mistakes are being made? Or do these pictures speak of a much colder reality: the fact that filmmakers always need ideas and we're a nation at war -- so any old plot, as long as it's topical and comes accompanied by the appropriate murmur of concern, qualifies as a valid response to the nightmare we've created?

"In the Valley of Elah" has award-bait written all over it. Topical? Check. Big stars giving performances that occasionally require them to weep? Check. Recognition that "war is bad" and does terrible things to the people we send to fight it? Check. Like Haggis' revered, Oscar-winning, race-relations brief "Crash," "In the Valley of Elah" is designed to stress us out only so much: Instead of sending us home thinking about things in a way we never did before, it only meets -- barely -- the milder requirement of confirming things we already know.

Even that would be OK if the movie worked adequately on dramatic terms. But the picture is in love with its own mechanics, and its mechanics aren't even that good. Jones' Hank Deerfield is the sort of solid, principled guy who understands the values of discipline, habit and duty: We get loving close-ups of the way he makes his bed in the morning, smoothing the sheets just so, of the way he sharpens the crease in his trousers by stretching them taut along the length of a table. But he's not a mindless robot. He knows that his son, Mike (Jonathan Tucker), is a good boy and a good soldier, and believes there's a good reason for his disappearance, although we can tell he senses something fishy about it. He soothes the anxiety of his wife, Joan (Susan Sarandon, who gives a valiant performance in a small, stock role that feels as if it's been wedged into the movie with a shoehorn), and sets out to figure out what happened.

When Hank -- a former military investigator -- gets to the military base from which Mike disappeared and starts asking questions, his instincts tell him he isn't getting the full story. Mike's disappearance rapidly becomes a murder investigation rather than a missing-persons case, and the military has no interest in mucking around with that kind of stuff. A local detective and single mom, Emily Sanders (Charlize Theron, in a solid but not particularly resonant performance), who's underappreciated by her overtly sexist colleagues, agrees to help Hank when she realizes that important clues in the case are being willfully ignored by everyone else.

The mystery here involves a series of patchy digital-video images captured in Iraq by Mike's cellphone, the jaunty lies of his buddies, who change their stories more often than conscientious military guys change their socks, and much suffering on Hank's part, who, as we can imagine, struggles with the fact that the values he holds so dear are not going to be enough to bring his son back. The most interesting parts of "In the Valley of Elah" are the ones that deal with the possibility that Mike and his buddies, understandably driven a little (or a lot) mad by the unethical demands of their jobs, have committed crimes against humanity that go even beyond just "killing the bad guys" (especially when it's not always clear who the bad guys are).

But even there, the movie chickens out. "In the Valley of Elah" could have been really interesting -- and really daring -- if it had focused on Hank's realization that his own child, supposedly a good kid, had perhaps committed the kinds of atrocities that would make any decent human being recoil. The movie (which Haggis also wrote) dances around that territory, but doesn't dare to march straight into its terrifying maw. Instead it fixates on the David and Goliath myth (the movie's title refers to the location of that battle), going for the overused metaphor to make its point about how good men have to stand up for their principles.

The plot of "In the Valley of Elah" is a messy tangle that leads down several unexpected, unsatisfying roads and still doesn't leave us with any sort of overwhelming feeling -- not even confusion or despair -- over the Iraq debacle. The picture was shot by Roger Deakins, a supremely gifted cinematographer, yet it looks as if it were shot through a sheet of wet toilet paper. I guess you can't have a movie about a serious subject look too nice. Jones' performance is the best thing here: He gives us a picture of a guy who insists on striding forward purposely, even when he's feeling like a lost man. His conflicts, and his muted sorrow, play across his face like shadows. He's an island of complexity and subtlety in a confused and unsubtle movie.

"In the Valley of Elah" is among the first fiction movies to use the Iraq war as a backdrop, and its problems are no indication that down the line we won't perhaps see some better movies that grapple with the subject. Still, we should remember that while immediacy can be powerful, it can also reinforce our blind spots instead of opening our vision wider. The difference between the bland stoicism of "Mrs. Miniver" (1942) and the careworn but sturdy determination of "The Best Years of Our Lives" (1946), both made by William Wyler -- a serviceman himself -- suggests that you can't always accurately record the emotional impact of a war while you're in it. Sometimes the considered clarity of hindsight trumps the fast response -- even in a world where the fast response has become king.