Will Bush dare to nominate Ted Olson as attorney general?

The infamous lawyer knows how to keep troublesome information hidden, and what better way for the president to taunt his detractors. 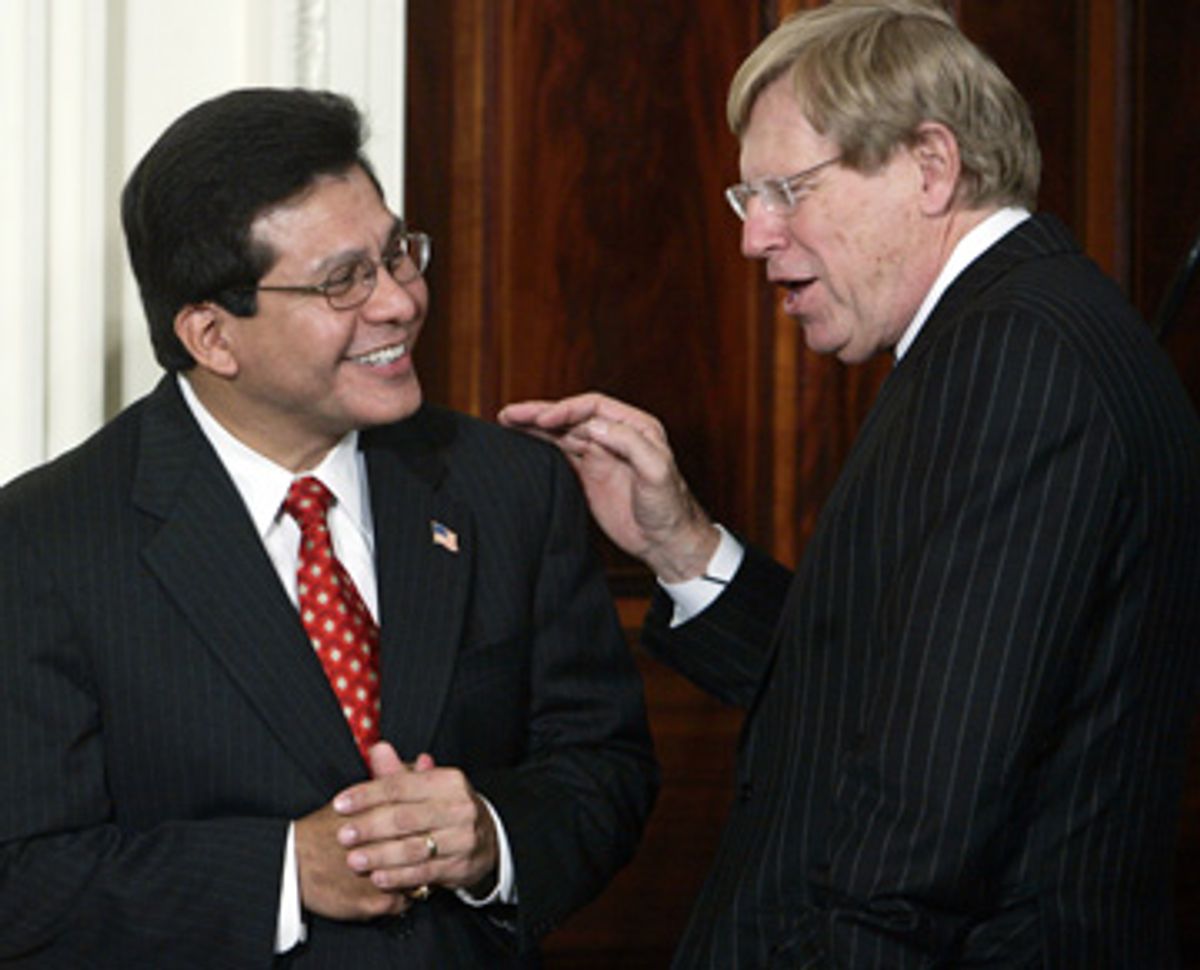 Should George W. Bush want to prove yet again that he is more pugnacious than presidential, then his choice for a new attorney general could not be more obvious. He will go ahead and nominate the man whose name the White House has floated for the past several weeks, and he will relish the inevitable bloody conflict when Theodore B. Olson, the legal éminence grise of right-wing Washington, seeks confirmation in the U.S. Senate.

Bush likely believes that there is nobody more qualified for the highest law enforcement office in the land than Ted Olson -- and if the standard of conduct is the departing attorney general, Alberto "Fredo" Gonzales, then he could be right.

It is true that Gonzales was forced to resign, at long last, only days before the Justice Department confirmed that the same federal prosecutors he supervised for the past few years are currently investigating him. The reported subject of that probe is whether Gonzales lied in congressional testimony, but the broader public brief against him includes politicizing the U.S. attorneys' offices, promoting excessive claims of executive power and placing loyalty to Bush above his oath to uphold the law.

But the president evidently sees nothing wrong with any of that alleged misconduct, and complained bitterly that partisan Democrats in the Senate (aided by a handful of dissident Republicans) unfairly drove his old pal from office. How better to make his point and irritate his enemies than to nominate Olson, whose character and history make him the perfect successor to Gonzales? He may be even more gonzo than Gonzo.

If you think Gonzales was excessively partisan in staffing the Justice Department and firing U.S. attorneys who didn't carry out Karl Rove's agenda, Olson demonstrated his own pure Republican partisanship -- and absolute Bush loyalism, another Gonzales trait -- when he helped direct the Republican legal team that "won" Florida for the Republicans in the Supreme Court of the United States during the aftermath of the 2000 election. Actually, he had earned his far-right credentials years earlier, when he joined the secret campaign to destroy the Clinton presidency that was financed by Richard Mellon Scaife, the conservative Pittsburgh billionaire behind American Spectator magazine's Arkansas Project.

Gonzales is widely believed to have spoken falsely when he testified in Congress about the firings of U.S. attorneys and the Bush administration's domestic surveillance programs. But Olson too has a long history of delivering misleading testimony, dating back to his years as an assistant attorney general in the Reagan administration in the early '80s.

Back then, Olson participated in an attempt to cover up wrongdoing in the Environmental Protection Agency's Superfund program, which Republican bureaucrats had misused for political purposes. As part of the Reagan White House's effort to stonewall a congressional investigation, led by the late Rep. Peter Rodino of Watergate renown, Olson sought to withhold various EPA documents from Congress. In a legal maneuver that prefigured many of the excesses of the Bush-Cheney years, he stretched the doctrine of executive privilege to the breaking point. His own sworn testimony in that episode led the House Judiciary Committee to recommend his investigation for perjury by an independent counsel -- a recommendation seconded by the Justice Department's own public integrity section and ratified by Attorney General Edwin Meese III. Ultimately Olson was not prosecuted because his testimony was cute enough to evade proof of perjury -- and because, like Gonzales, he claimed not to be able to remember the events that made him appear to have lied under oath.

Nearly 20 years later, he came before the Senate Judiciary Committee as the new Bush administration's nominee for solicitor general, one of the highest positions in the Justice Department. Questioned by Democrats about his role in the Arkansas Project, a scheme born during a meeting of Clinton-hating conservatives at his Washington law office in late 1993, he denied any participation -- at first. But there was no dearth of proof to the contrary, including testimony from former Spectator reporter David Brock and an Arkansas Project financial ledger showing $14,000 in payments to Gibson, Dunn & Crutcher, Olson's law firm.

What the senators never learned during the Olson hearings was how he had sought to ensure that the truth concerning the Arkansas Project would never be revealed. As a lawyer for the Spectator, Olson had handled the firing of the magazine's publisher, Ronald Burr, who had demanded a "fraud audit" of the project, and negotiated a severance agreement that required Burr's permanent silence.

If Bush needs another lawyer who knows how to keep troublesome information hidden, then Olson is a superb choice. So what if he was selected for criminal investigation by the same law enforcement department that he would now run? That places him squarely in the Bush tradition of public service.

Certainly Olson would be a daring choice, if for no other reason than his embarrassingly contentious confirmation in May 2001. After Olson's highly dubious and contradictory testimony about his past participation in the Arkansas Project, the Senate Judiciary Committee split 9-9 in a vote to send his nomination to the floor. But the Democrats chose not to make his defeat their top priority when they suddenly won control of the Senate with the defection of former Republican James Jeffords of Vermont. Even so, he barely escaped humiliation; the final vote was 51-47, with only two Democratic senators endorsing him, an unusually narrow margin for any presidential nominee.

Now Senate Democrats are once more in control, with Olson nemesis Sen. Patrick Leahy, D-Vt., chairing the Judiciary Committee. Senate Majority Leader Harry Reid has vowed to stop Olson's nomination, throwing down a challenge that Bush may not be able to resist. If Bush wanted to heal the politicization that has nearly ruined the Justice Department, he would drop Olson and nominate someone else -- but then he would be an utterly different kind of president than he is.