Play the Blame Fame game! "Nashville" and "Gossip Girl" prove that the only thing tackier than fame is fortune. Plus: On "Top Chef," Anthony Bourdain uses words to hurt people. 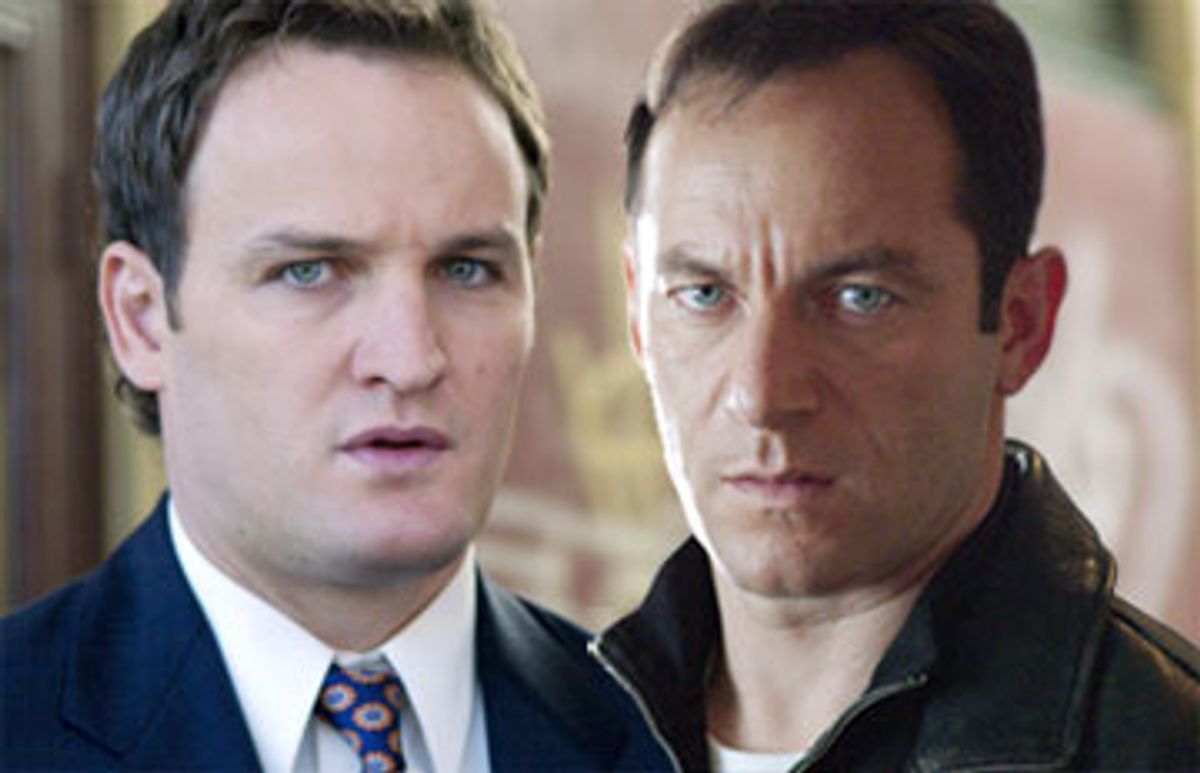 Everyone wants to be famous! It must be the blinding flash of the cameras, the shoving and mauling by obsessive fans, the stalking by random psychos that we long for. Or maybe it's the isolation, the inability to maintain normal friendships untainted by the limelight, and the second-guessing and self-doubt that we crave.

It must be so amazing, though, to feel confused and distrustful of everyone around you! Just think of how glamorous it would feel to toss and turn at night, wondering, "Does he really like me for me, or does he just want to go to cool parties and get his picture in magazines so his high school enemies will be jealous?"

Who wouldn't want to tango with fickle Hollywood, a monster that embraces you one minute and chucks you the next like yesterday's moldy cheese? Who wouldn't love to soak in all of that attention and praise, then fall from grace and be forever referred to as "desperate" or a "C-lister"? How cool would it be to hear people scream at you, "Watchoo talkin' 'bout, Willis?" or, "Hey, Tattoo! Where's de plane?" 20 years after the fact? And wouldn't we all love to be invited to perform in the midst of an alcoholic downward spiral, just so Sarah Silverman could rip us a new asshole afterward?

And that's not to mention the undeniable allure of agoraphobia, depression and the inevitable descent into addiction. It's impossible not to crave fame! Just think, everyone out there could love you for all of the wrong reasons, too! What could be better?

Country ham
Well, a hard shovel to the side of the head, for one thing. But sadly, most kids don't recognize that all of the disorienting headaches, dizzy spells and confusion of fame could be theirs, with just one well-aimed swat to the head.

But if you're one of the unfortunate nobodies, the kind of person who no one is stalking on Gawker right now, the sort of sad sack who picks their butt in public without anyone capturing it on their camera phone, well then, you'll be able to relate to the fame-seeking honeys and beefcakes of "Nashville" (9 p.m. EDT Fridays on Fox).

Yes, it seems that those wacky producers behind MTV's "Laguna Beach: The Real Orange County" went sniffing around for a more genuine, authentic-seeming backdrop to suit another batch of young, pretty back-stabbers, and where did they land? Smack dab in the heart of the Volunteer State, Tennessee!

Too bad nobody's volunteering any original thoughts or insights on this country-fried stink bomb. Not surprisingly, young, pretty back-stabbers look and sound and act the same no matter where you find them. Once the producers select their pretty faces, then get all of their little love triangles twisting in the wind, you've got the same basic scenes you've seen on "Laguna Beach" and "The Hills" and every other reality soap in the book:

Step 4: Hot Girl hates Mediocre Player. They talk. She loves him again. He flirts with OHG again. She hates him. Etc.

Apparently most of the young folks on "Nashville" can sing and write songs, but aside from one kid who's about to get a record deal, you wouldn't really know it from the pilot. All we see is a bunch of guys and gals flirting, pouting and occasionally droning on and on about how the one thing they want, more than anything else in the world, is to be famous.

"Listen, be careful what you wish for," says Daddy Terry, and then he catches himself. "But at the same time, if that's what you want, who am I to say don't chase your dreams? God, that's what's fun." Until the shovel knocks you in the head, anyway.

But look, Rachel! You're on TV right now and you're Terry Bradshaw's daughter! You're already famous! What, it's not really all that great unless they love you for you -- or rather, the version of you that your record label (if you ever get one) decides to sell them? Well, that explains why Britney Spears and Kelly Clarkson and so many other big-deal pop singers are so unreasonably happy.

As it turns out, the drive to be famous is the great equalizer: Everyone who wants to be famous looks and sounds exactly the same, and they're all about as charming as a bag of hammers. Add to that the fact that the producers of these shows like to cast human beings who are unreasonably dull and lacking in wit or ideas, and you've got a show that's just dumb and repetitive enough to be embraced by a bunch of fame-hungry teenagers nationwide. Nice going, Fox! Another highbrow feather for your very sophisticated 10-gallon hat!

Talk of the town
The brooding teenagers on "Gossip Girl" (premieres 9 p.m. on Wednesday, Sept. 19, on CW) aren't really famous, but they are rich, and thus worthy of Gawker-type gossip, delivered via a "Desperate Housewives"-style voice-over featuring the telltale snark of Kristen Bell, aka Veronica Mars. As the mysterious Gossip Girl, Bell doesn't appear on-screen, unfortunately; she just offers a play-by-play of rich-kid shenanigans on her Web site, vowing all the while never to reveal her identity.

Josh Schwartz isn't stupid. Just as he knew that we'd love a soap about a sulky working-class misfit, stuck in a hopelessly pretty, McMansion-filled California beach town, now he recognizes -- as the producers of "Nashville" do -- that we're sick of sunshine and nice tans. Schwartz has determined that what we want, more than anything else, is to lounge around with some seriously rich prep school brats in New York City.

Lord knows this terrain is much juicier and more disturbing than the bland new-money Californians of "The OC." For one thing, the rich NYC mothers are far more intimidating and scary than the Newpsies (loaded but tacky Newport Beach divas). One well-timed glare of disapproval or cutting remark from one of these heartless sophisticates, and you're struggling with multiple eating disorders for the rest of your days on earth.

"Blair, if you're going to wear one of my designs, tell me, so we can at least get it properly fitted," one mother hisses sweetly at her daughter. Another is overheard braying, "So I told them forget it, I don't care if it's Murakami, it clashes with my sofa!"

Of course we're provided with a good, down-to-earth Sandy Cohen-style daddy, Rufus (Matthew Settle), who has the added advantage of having once been cool (his band was No. 9 in Rolling Stone's "Top Ten Forgotten Bands of the Nineties"). Then there's a slightly hotter version of Seth Cohen, Dan (Penn Badgley), and his somewhat naive, social-ladder-climbing little sister Jenny (Taylor Momsen). But the real center of attention here is Serena (Blake Lively) -- the new, improved NYC Marissa -- who's being pushed out of her circle by nasty Blair (Leighton Meester) because of some bad choices Serena made in the past. So it looks like Dan secretly loves Serena, and Blair's guy Nate secretly loves Serena, but Serena's just, you know, depressed and stuff, but hopefully not with the big "Kick Me" sign on her back that Marissa had from Day One. Let's just keep Imogen Heap out of this.

When you really think about it, "Gossip Girl" is like an "OC" spinoff starring Oliver, Marissa's sophisticated but suicidal ex-boyfriend. You just throw in a bunch of similarly sullen richies, have them sipping drinks at luxury hotels or strolling through the aisles of the trendiest high-end department stores, and it's all very romantic and special. As a result, kids nationwide daydream about one day making enough money to live in the giant upscale walking mall that NYC has become.

Onward to some predictions for the first season of "Gossip Girl":

1. Someone attempts suicide. Maybe self-destructive Chuck (Ed Westwick), since he'll have played the villain in so many episodes that we'll need to feel sorry for him by then. (Remember poor Luke, ostracized thanks to his gay dad?)

2. Someone battles an eating disorder. Because when you're too rich, the only thing left to be is too thin.

3. We're teased with finding out the identity of Gossip Girl herself.

Now, if Schwartz were really smart, he'd get Kristen Bell to materialize on-screen halfway through the season instead of relegating her to voice-over land. That way little Dan could fall madly in love with her. Maybe Bell could dye her hair brown, so we wouldn't secretly wish she'd ditch the rich losers and help out the NYPD instead.

Anyway, if it isn't already obvious, "Gossip Girl" should be a good ride, at least until all the characters become more and more likable and there's no conflict or tension anymore, and then you have to kill off the weakest one just to get people to pay any attention.

Broccolini and I
Speaking of killing off the weakest one, the elimination challenge on last week's "Top Chef" (10 p.m. Wednesdays on Bravo) was seriously brutal. The chefs were asked to create a dish that could be heated and served to first-class passengers on an airplane, and the quality of the resulting dishes ranged from fantastic (Hung) to inedible (CJ). But the very best exchange of all occurred when judge Tom Colicchio and guest judge Anthony Bourdain ganged up on defiant cheftestant Brian Malarkey:

Tom Colicchio: You're surprised that you're here (in the bottom three)?

Colicchio: You're here because that hash was disgusting.

Colicchio: That hash was gross.

Anthony Bourdain: The lobster had the texture of doll head.

But then they eliminated CJ, which is sad because he's the most entertaining cheftestant in "Top Chef" history. Even though Bourdain compared CJ's broccolini to something found in the back of Bob Marley's closet and Colicchio declared it the worst dish in three seasons of the show, CJ still had a swagger in his step on the way out. Since Bravo seems to like handing out shows to colorful personalities, they should really find a way to put CJ's charms to good use somewhere.

Speaking of which, did you catch last week's interview with "Flipping Out's" Jeff Lewis? That guy should have his own solar system.

Emmy time!
While I'm outlining my personal wishes, let me add that Sunday night's outstanding drama Emmy should clearly go to "The Sopranos," the outstanding comedy Emmy should go to "30 Rock," Alec Baldwin should win best supporting actor for his role on that show, Elizabeth Perkins should win best supporting actress for her role on "Weeds," and all of the members of the Academy of Television Arts and Sciences should get brand-new TiVos so that they'll actually watch a little television now and then. That way they'll know what "The Wire," "Friday Night Lights" and "Battlestar Galactica" are, and they'll realize that some of the shows they keep loving for all of the wrong reasons are, not to put too fine a point on it, bad.

But then, isn't bad really beside the point, when money and fame are in play? In the dizzying glare of the limelight, one man's delicious lobster is another man's rubbery doll head. Hand out the awards to whomever you want, all we really want is to imagine that those shiny humans on the red carpet are immune from sadness so we have something uncomplicated to strive for. Ladies and gentlemen, swing those shovels!