Best known for his tales of losers, thieves and addicts, Denis Johnson takes on the Vietnam War in his daring new novel, "Tree of Smoke." 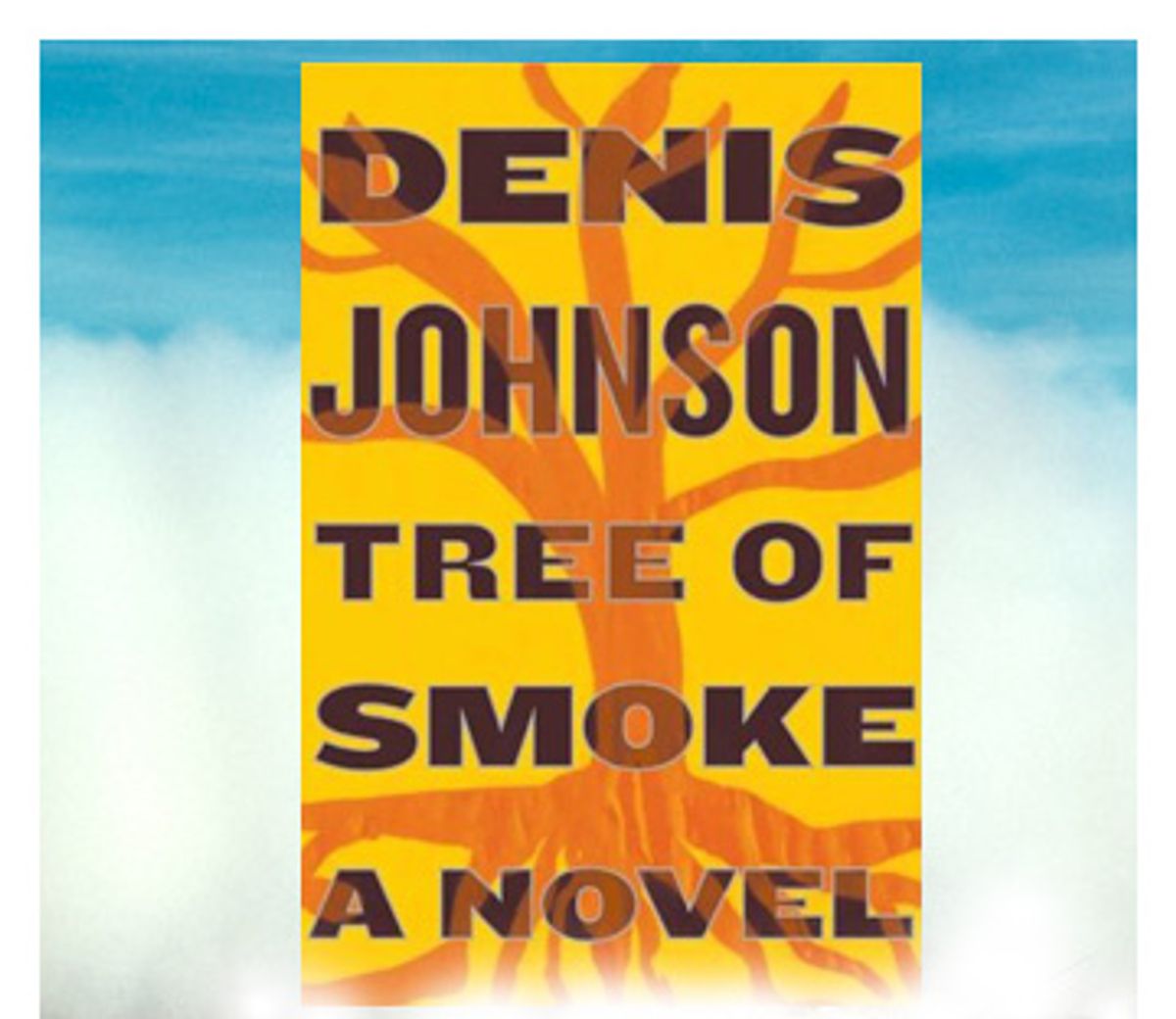 Once upon a time, Denis Johnson published a collection of stories called "Jesus' Son," flinty shards of lowlife illuminated by the phosphorous glow of the author's despairing faith or faith in despair (it's often hard to tell which). "Jesus' Son" turned out to be unforgettable, which hasn't always worked to Johnson's advantage. Knowing and loving those stories has made it difficult for lazy readers to grasp what Johnson has accomplished since. His widely misunderstood and woefully underappreciated novel "Already Dead" is a symphony of malevolence and chaos harnessed to a baroque but exquisitely executed plot. Many critics, apparently flummoxed by Johnson's abrupt shift from minimalism to maximalism, missed the underlying pattern and declared the book a big mess.

Johnson's latest novel, "Tree of Smoke," is the same kind of beast. It has a better chance of being taken seriously than "Already Dead" because the latter book was set in the drug culture of coastal Northern California while "Tree of Smoke" takes place during the Vietnam War. If you're going to be as formally daring as Johnson is here, it helps to throw the acolytes of received wisdom a bone they can get their jaws around; 'Nam, man, we all know that's heavy. The novel, however, isn't really about war, or not quite. Like a lot of Johnson's work, it's about belief, specifically about the clash between religion and myth. More specifically yet, it's about what happens when people who think in a straight line collide with a universe that goes in circles.

Johnson's two main characters are young American men. One, Skip Sands, is a CIA officer cutting his teeth in Southeast Asia, and the other is James Houston (the brother of a character from another Johnson novel), an aimless working-class kid transformed by the war into a feral monster. The loose bond connecting them is Col. Francis X. Sands, Skip's uncle and boss, known to most of the characters simply as the colonel. A legendary World War II hero and charismatic personality, the colonel has commandeered an entire infantry platoon to run an obscure reconnaissance base in a back corner of South Vietnam. Their project has something to do with mapping tunnels (although not much of that goes on) and he calls it "Labyrinth." He reigns over this fiefdom in spite of the fact that he's not actually in the military anymore. "If it wasn't for last Tet," a marveling enemy observes, "by now he'd probably have his own brigade."

The colonel puts Skip in charge of a far less thrilling task: duplicating and cross-referencing a set of 19,000 index cards filled with intelligence about the region. Stashed away in a villa once owned by a suicidal French doctor, sifting through two footlockers stuffed with this rapidly aging information, Skip feels himself to be exiled from the action. James, detailed to the colonel's platoon, would be restless, too, were it not for the cornucopia of purchasable sex available in town. The characters spend the first half of the book impatiently waiting for their war to start, and the last half wishing it would end, until they finally realize that, for them, it never will.

In the middle comes the Tet Offensive, including a bravura combat sequence when the platoon finally comes under attack. At the dead center of the book is a scene in which nearly all of the characters are present to witness a half-mad American "Lurp" (Long Range Reconnaissance Patrol) torture a captured Viet Cong guerrilla until the colonel intervenes and shoots the victim. This is the hinge of the novel, its heart of darkness, and the rest of the story's events radiate from that point, forward and backward in time, with an impressive symmetry. Important images -- monkeys, mazes, eggs -- and events mirror each other at points equidistant from that center.

This is the unconventional structure of "Tree of Smoke," as audacious as one of the colonel's schemes, and yet so far largely unnoticed by its reviewers. Jim Lewis, in the New York Times Book Review, seems most interested in favorably comparing Johnson's press campaign with those of other (unnamed) novelists he regards as spotlight whores, and Michiko Kakutani dull-wittedly remarks that "plotting has never been one of [Johnson's] strengths." Yet the plotting of "Tree of Smoke" is exactly what makes it exceptional among Vietnam novels.

The formal inventiveness of Johnson's recent work gets missed partly because many readers still associate him with bleak, simple tales of losers, thieves, addicts and drunks; perhaps they expect the author to be as disorganized as his subjects. It has also become standard to complain that long, complicated American "social" novels are brilliant but "baggy" and wayward; this can be passed off as critical acumen if you're not sure what an author is really up to. But, above all, it is difficult to recognize the experimentalism in Johnson's novels as such because unlike most experimental fiction, they are not dull. Johnson never signals his readers that he's about to deliver a dose of highbrow medicine, and so you can swallow it along with all the blood and guts, the spy stuff, the profane GI repartee, the honky-tonk debacles, the harrowing battle scenes and so on, and never know what hit you.

You can feel the effects, though, and so Kakutani, while entirely missing the point of "Tree of Smoke," wonders over Johnson's ability to "take these derivative elements and turn them into something highly original -- and potent." "Derivative" is not the half of it. Scenes, characters, motifs and incidents in "Tree of Smoke" have been freely borrowed not only from "Heart of Darkness," but also from "A Passage to India" and "The Quiet American," as well as every Vietnam movie ever made, but especially "Apocalypse Now" and "Platoon."

Those are just the ones I caught; I don't doubt there are at least a dozen more. "Tree of Smoke" triumphs not in spite of these "borrowings," but because of them; that is the source of its potency. Johnson's operative philosophy here might best be captured by a line occasionally quoted in the new "Battlestar Galactica": "All this has happened before, and all this will happen again." The colonel's cigar-chomping, the atrocities of the Lurps, Skip's perambulations through Graham Greene territory -- all these are meant to feel familiar. It is the fatal flaw of the Americans that they believe themselves able to triumph over the eternal recurrence of such things. The colonel understands the nature of the battle better than any of the other characters, except perhaps for the Vietnamese themselves. "War is 90 percent myth," he tells Skip, who can't understand why his uncle has ordered him to collect local folklore. In the end, myth itself engulfs the man.

If "Tree of Smoke" has a "message" (I'm not sure it stoops to that), it is not that those who fail to learn from history are doomed to repeat it. Rather, those who learn from history know they are doomed to repeat it, and this has obvious relevance to current foreign policy catastrophes. The Westerners in this novel, like Westerners everywhere, are steeped in the Bible -- a book with a beginning, middle and end. Theirs is a narrative faith: They believe that the world is morally coherent and progressing toward something, that the future can be radically different from the past. They come unmoored, as the colonel puts it, in "a land where the fate of human beings is completely different from what you understood it to be ... And this utterly different universe is administered through the earth itself." The same stories keep reappearing over and over again in somewhat different forms, an ongoing cycle -- reflected in the mirroring of images and events in the first and second halves of the novel -- that most of Johnson's characters (and apparently all of his reviewers) are too blind to perceive.

The sole exception is the novel's only substantial female character, Kathy Jones, a Canadian Seventh Day Adventist missionary who stays on to run a Vietnamese orphanage after her husband dies in country and who has an affair with Skip. Ironically, her spiritual crisis is precipitated by reading her dead husband's copy of the essays of John Calvin. Contrary (perhaps) to Calvin's intentions, she recognizes his vision as one of "despair," in which the fate of every human being is fixed, predetermined. In fact, as far as she's concerned, it has already unfolded. "This is Hell," she tells Skip, "right here, planet Earth, and I know that you, me, and all of us were made by God only to be damned."

Kathy figures out how to go on in spite of this revelation; the other Westerners are broken by it. Even the supposedly secular characters face the same dilemma, as do those back in the States; the colonel's idea that places like Vietnam are administered by an "alien god" is itself merely a comforting illusion. Whatever monument they try to build with their lives becomes like the titular tree of smoke: impressive, even terrifying for a moment, but dispersed like a dream by the winds that endlessly circle the globe.