Guns, not roses, for Iraq

The U.S. is selling billions in weapons to Iraq. Is the Pentagon's plan making the country secure or arming it to the teeth for civil war? 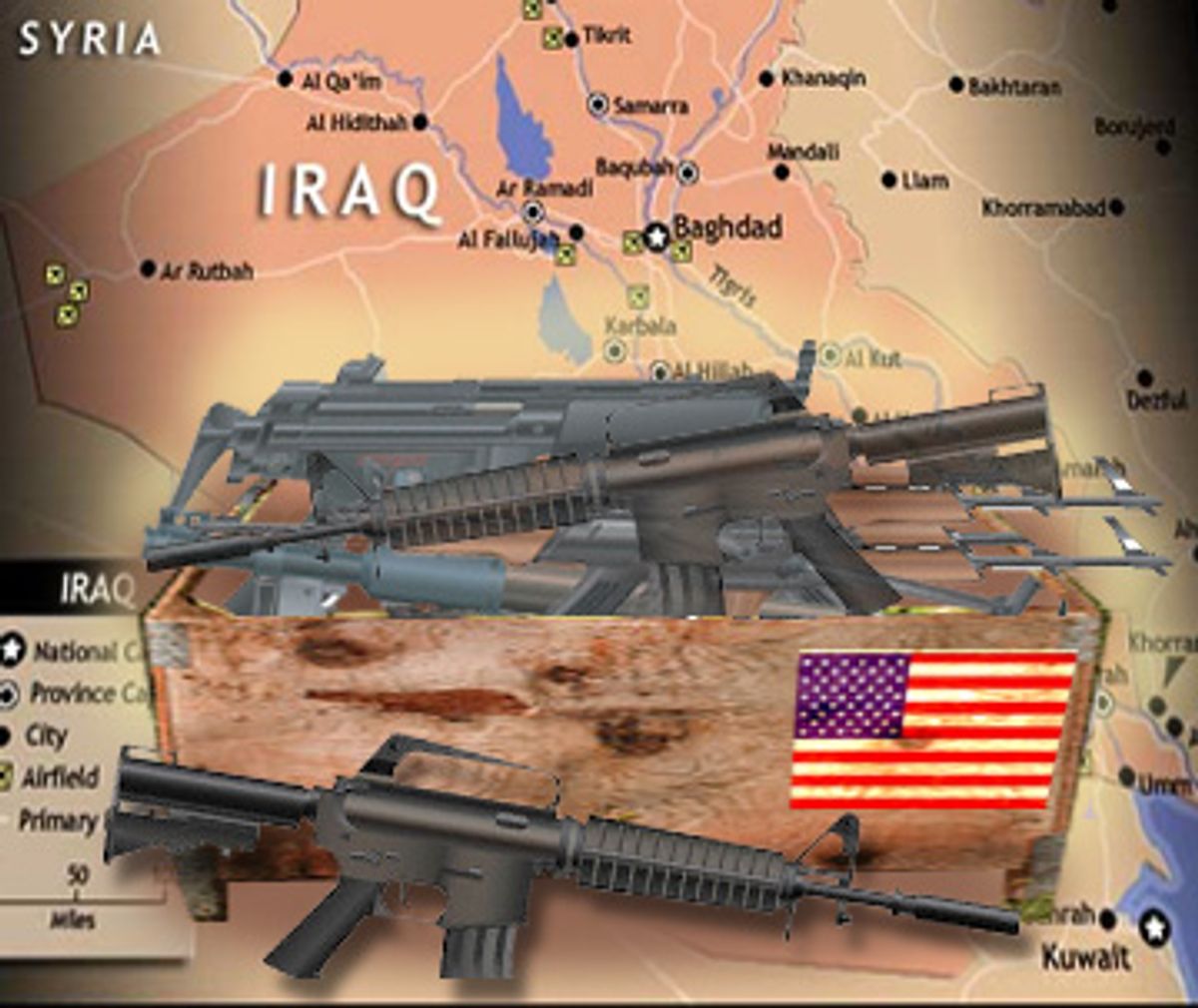 The grand debate about Gen. David Petraeus' Capitol Hill testimony last week on U.S. strategy in Iraq focused primarily on troop levels, withdrawal dates and whether Bush's so-called troop surge was succeeding. But widely overlooked was Petraeus' sales pitch to lawmakers for one initiative he said will help save the war-torn country: massive arms sales from the U.S. government to Iraq.

"Iraq is becoming one of the United States' larger foreign military sales customers," Petraeus told the Senate Armed Services Committee on Sept. 11, noting that Iraq has inked deals to buy $1.6 billion in arms from the U.S., with the "possibility of up to $1.8 billion more." Data obtained by Salon shows the arms sales could rise far higher than even the amount the general suggested last week.

Petraeus said that the arms sales are an important part of the initiative to keep the Iraqis "rapidly expanding their security forces." But Petraeus himself presided over an arms debacle in Iraq in 2004 and 2005 in which nearly 200,000 weapons went missing. And while U.S. arms might help the Iraqi security forces "stand up" in the short term, experts warn that the U.S. military could easily lose control over what may follow. Some fear a war zone flooded with weapons that could be turned on U.S. soldiers, or supply huge firepower for a full-blown civil war.

The Pentagon confirmed that this fiscal year, the United States has finalized $1.6 billion in arms sales to Iraq, placing the country in an elite club of weapons buyers. For example, in recent one-year periods Saudi Arabia bought $800 million and Egypt bought $1 billion in arms from the U.S., while Pakistan spent $3.5 billion, including the purchase of jet fighters. "This would put [Iraq] right up there with the top handful of arms buyers," said William Hartung, a weapons proliferation expert at the New America Foundation.

In fact, the numbers Petraeus presented on Iraq were the tip of the iceberg. According to data obtained by Salon from the Defense Security Cooperation Agency at the Pentagon, which manages the arms sales, the military has alerted Congress to up to $4.3 billion in arms sales that have been under discussion since at least 2006 between the U.S. and Iraqi governments.

The arms deals come as the U.S. has shifted strategy to enlist Sunnis in western Iraq -- some of them former insurgents -- into all-Sunni units of the Iraqi security forces. The fear is that these newly trained and armed units will ultimately turn against the Shiite-dominated central government or against U.S. forces again. "I think this is kind of crazy," Hartung said about the arms sales. "Now we are making deals with some of these Sunni groups. Well, what if they turn around and go back to being insurgents after we have built them up? I think the danger of these arms being misused, even in the short term, is fairly high."

The weapons are sold through what is called the Foreign Military Sales program, which handles direct, government-to-government arms sales. Federal law requires the Pentagon to notify Congress of deals under development through that program, even if final contracts have not yet been signed. On Sept. 19, 2006, for example, the Pentagon alerted Congress of one pending deal with Iraq, worth $500 million, including 100,000 M-16 and M-4 rifles, the models carried by U.S. troops; 10,000 heavy machine guns; more than 10,000 Glock pistols; almost 3,500 M-24 sniper rifles and 1,300 night vision goggles; and tens of millions of rounds of ammunition.

Plans to sell billions in small arms to the Iraqis could come back to haunt the United States, agrees Rachel Stohl, a senior analyst at the Center for Defense Information at the World Security Institute. "I don't know if it makes sense to pump more weapons into the hands of actors that we have absolutely no idea about what their angles are and how those weapons are going to be used," she said. "It is such a chaotic situation ... I'm not sure at this point that that is the best policy."

Losing control of weapons once they are out of U.S. hands is a risk Petraeus knows about. In July, a Government Accountability Office released a critical report showing that the military had lost track of 190,000 weapons the U.S. military was supposed to hand out to Iraqi security forces, including 110,000 AK-47 rifles. That report received widespread attention in the media. (These weapons, purchased by the United States and handed out to Iraqis, are in addition to these new arms deals with Iraq.)

What received less attention was that the report was highly critical of Petraeus himself, though not by name. He was the first commander of the Multi-National Security Transition Command-Iraq from when the command was set up in June 2004 until September 2005. That command was in charge of training and equipping Iraqi security forces. According to the GAO report, Petraeus' command "did not maintain a centralized record of all equipment distributed to the Iraqi security forces from June 2004 until December 2005." As a result, the whereabouts of 110,000 AK-47 rifles, 80,000 pistols, 135,000 items of body armor and 115,000 helmets are unclear. The military, the report added, "cannot ensure that Iraqi security forces received the equipment as intended."

Late last month, a report from National Public Radio revealed that Glock pistols were part of a growing black market in Turkey for weapons of U.S. origin.

"I think he has gotten off easy on this," Stohl said about Petraeus' role in the missing weapons. "Obviously you have to place the blame somewhere and I think that he should take some of it."

When Petraeus was pressed about his role in the missing guns, he argued that the weapons had to be handed out quickly to Iraqis willing to fight against insurgents. There was no time to wait around for tracking systems to be implemented, he said.

Petraeus is now emphasizing speed once again. The Iraqis "have put a lot of stock into Foreign Military Sales, and we have to come through for them," he said in response to questioning by Arkansas Democrat Mark Pryor during last week's Senate hearing. "It can't be business as usual. It has to be really moved very quickly."

Lt. Col. Christopher Garver, a military spokesman in Iraq, said the military now carefully records the identity of each member of the Iraqi security forces who gets a weapon. "That means you take a serial number. You take a retinal scan. You take fingerprints of all 10 fingers. Those all get compiled in a database together," explained Garver. Lost weapons can now be traced back to their original recipients, Garver said.

Garver conceded, however, that the improved tracking system will be of little use in a civil war. "It does provide a measure of control," he said. "In terms of loyalties lying where they lie, will that prevent someone from going to do something? No."

On the home front, American arms companies stand to gain from the arms deals with Iraq, since Pentagon contracting practices favor domestic arms manufacturers. But good business doesn't necessarily equal good foreign policy. According to Stohl, the arms sales to Iraq are part of a troubling pattern of the Bush administration's supplying weapons to unstable regimes since the terrorist attacks of Sept. 11, 2001. Early this month, her organization released a report on arms sales to 25 countries considered to be key allies in the so-called war on terror, including many with clear human rights or stability issues, including Ethiopia, Chad and Pakistan. The report showed that since 9/11, arms sales to those 25 countries were worth four times more than sales to those countries in the five years before 9/11. It added that the State Department had reported serious, grave or significant human rights abuses committed by the governments of more than half of the countries on the list.

"I think the United States has made the mistake, since 2001 in particular, of looking at short-term benefits rather than long-term strategic gains," said Stohl. "It is not just with these sales we are talking about in Iraq. It is also from a global perspective in terms of increasing military assistance to governments that probably have not been very much on our side in the past."

With respect to Iraq, most experts agree that it very much remains an open question as to who in that country might be on our side in the future.