She has a pitch-perfect new ad and a grand plan for healthcare reform. How much will it matter in the campaign -- and beyond? 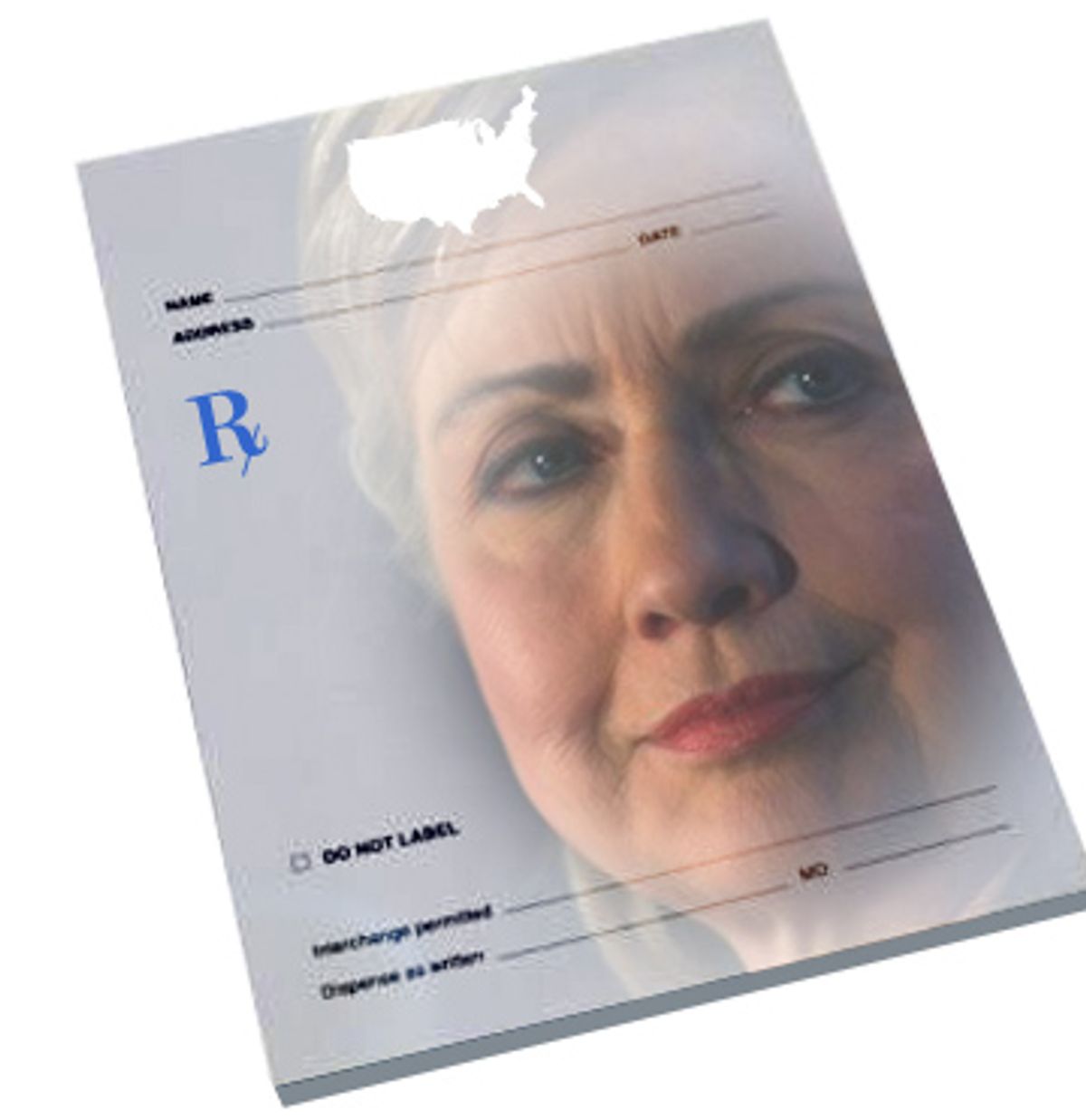 The bumper-sticker problem has defeated more good legislation than a Capitol Hill steakhouse filled with red-meat corporate lobbyists. Brevity is not only the soul of wit, but it is also the secret sauce for policy success in Washington. If you cannot convincingly explain an ambitious program on a bumper sticker or in a 30-second TV spot, then you might as well slink back to the think tank in defeat.

By this standard, Hillary Clinton's ballyhooed "14 years in the making with a cast of hundreds of policy experts" remake of healthcare reform has been an unqualified success. Beyond the actual proposal, the 30-second TV spot explaining it is pitch and pith perfect. The new Clinton ad, which aired Wednesday on Iowa and New Hampshire TV, declares in a cheery voice-over, "She changed our thinking when she introduced universal healthcare to America ... Now she has a healthcare plan that lets you keep your coverage if you like it, provides affordable choices if you don't, and covers every American."

The "she changed our thinking" line is, of course, ad speak for "she mucked it up back in 1994." But the genius of political packaging lies in that magical sentence succinctly summarizing the reassuring virtues of Hillary Care II -- it "lets you keep your coverage if you like it [and] provides affordable choices if you don't." Presented in these soothing terms, it is difficult (though not impossible) for a plan for universal coverage to be demonized with an updated version of the fear-mongering "Harry and Louise" ads that bludgeoned to death the 1994 Clinton reforms.

In political terms, her new healthcare plan plays against type. Rather than being timid and incremental, her proposals are as ambitious as those offered by John Edwards, who was the first major Democrat to offer a plan for universal coverage. (Dennis Kucinich remains a voice in the wilderness with his call for a government-run single-payer plan.) Like Edwards, she would legally mandate that uninsured individuals obtain health coverage -- and would provide hefty subsidies for those who cannot afford it on their own. The Clinton and Edwards plans (along with a more narrowly drawn proposal advanced by Barack Obama) would be largely financed by rolling back the Bush era tax cuts for those earning more than $250,000.

A healthcare proposal offered for the primaries -- 17 months before the next president takes office -- should not be judged in the same meticulous way as a speech to a joint session of Congress. But in symbolic terms, no Democrat has more riding on this issue than Hillary, who was stripped of any public policymaking role in the Clinton White House after her Rube Goldberg-like health plan died without even a vote in Congress. "It means more for her because the issue works on so many different levels as a character test," said Democratic media consultant Anita Dunn. "And after Day One, she's off to a good start."

Edwards, in particular, has also treated healthcare as a character test, suggesting that Clinton is too tied to lobbyists to serve as an apostle of reform. As Edwards put it in a speech to a union group in Chicago Monday, "If you're going to negotiate universal healthcare with the same powerful interests that killed it before, your proposal isn't a plan, it's a starting point." Then, in an illustration of Rumpelstiltskin, stamp-your-feet politics, Edwards pledged to press for legislation on his inauguration as president giving Congress six months to pass healthcare reform or lose their own insurance coverage. The 2004 vice presidential nominee never explained why he believed that Congress would succumb to this gimmicky threat.

Less than four months before the Iowa caucuses, there is scant evidence that Democrats will be mobilized to choose a candidate based on his or her healthcare position papers. All Democratic contenders agree on the goal of universal coverage for the 47 million without insurance -- and, Kucinich aside, their road maps for getting there only differ in the details.

"The candidates would do just as well to hold up blank reams of paper and say, 'This is my healthcare plan,'" joked pollster Andy Smith, the director of the Survey Center at the University of New Hampshire. "Healthcare has been consistently coming up as the second or third most important issue in the polls after the war. But are the voters following the debate over the nuances of policy? No."

This may be a rational decision, since so many unknown factors will dictate the odds on passing healthcare reform legislation after the 2008 elections, even if a Democrat is elected president. The biggest variable is the political composition of the next Congress -- and whether the Democratic nominee wins a mandate or a hairbreadth Bush-style victory. If the economy tumbles into a recession, the downturn may well delay the reform impulse. And all the economic calculations by the Democratic contenders blithely assume that Congress eagerly will roll back the tax cuts for the wealthy to pay for universal coverage, a highly dubious assumption.

Joe Biden may be the ultimate long shot for the nomination, but among the Democratic presidential field he is also the closest thing to a professional truth-teller. In Cedar Rapids, Iowa, earlier this summer, Biden sketched out the realities of the Democratic policy debate. "In healthcare," he said, "we have all these great plans. Can anybody here explain to me any one of the plans that any Democrat has put forward?" Not a single hand was raised among the roughly 100 Democrats at the Blue Strawberry coffee shop. "I'm not being a wiseguy," Biden said, "they're all good plans. If plans could get the job done, we would have had national healthcare two years ago."

Hillary Clinton knows better than anyone how long Democrats have been concocting plans for healthcare reform. In rolling out her plan for universal coverage this week, Clinton demonstrated two telling character traits: She could learn from her prior mistakes and she could -- when prodded by Edwards and others -- be as bold on policy as any major candidate in the race. But the unanswered (and perhaps unanswerable) question is whether Hillary Clinton, still a divisive figure for many, would be the Democratic presidential nominee who could best turn these abstract healthcare prescriptions into legislative reality.