The not-so-mysterious case of the coy candidate

Who's paying for those ads attacking Mike Huckabee? Everybody in Arkansas seems to know -- except Huckabee. 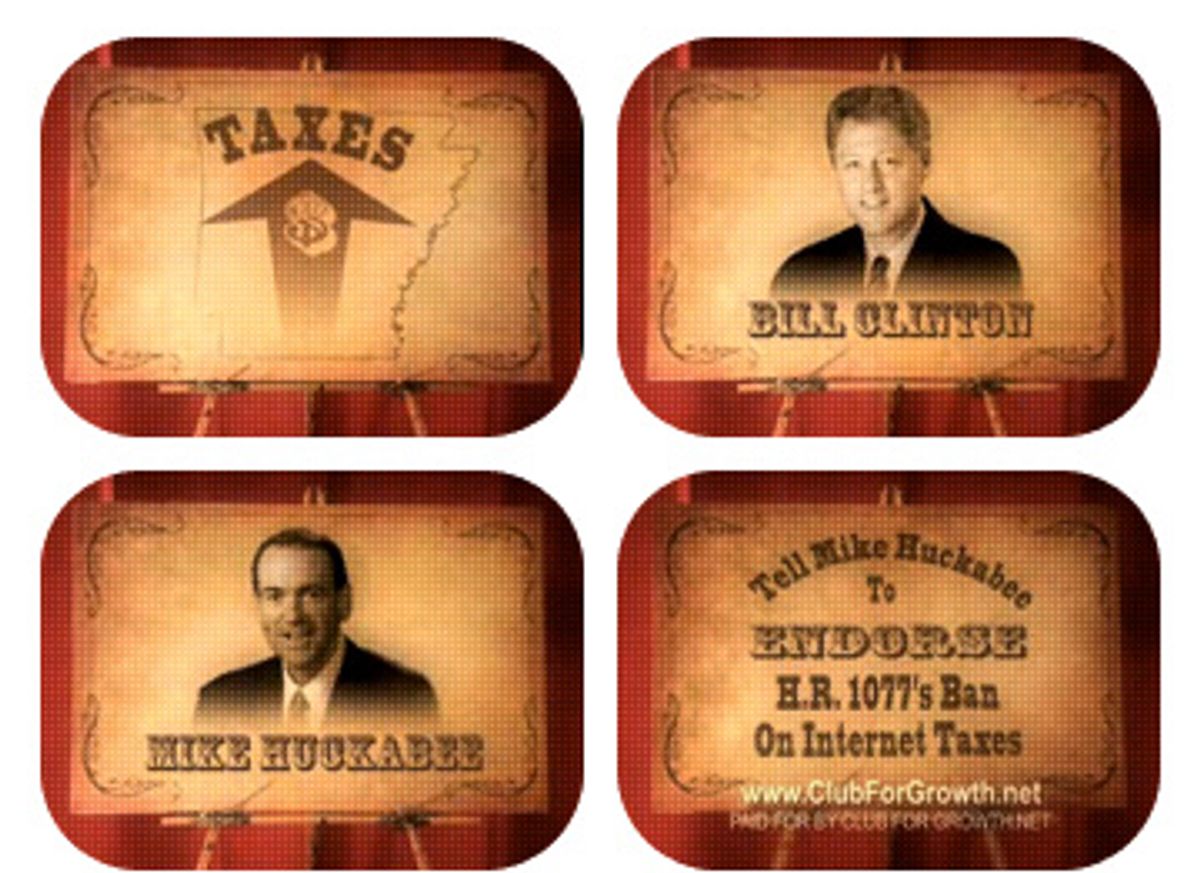 As political whodunits go, it was a remarkably easy case to crack.

In late August, former Arkansas Gov. Mike Huckabee went on Fox News Sunday to ask a nation of amateur sleuths for help. A conservative low-tax group, the Club for Growth, had just spent $85,000 on a television attack ad in Iowa, accusing the former Arkansas governor of "raising taxes like there was no tomorrow" while flashing his portrait next to a picture of Bill Clinton. Huckabee, who claims to be a fiscal conservative in the tradition of Ronald Reagan, said he just didn't know who was behind the attacks.

"You have to wonder: Where did that money come from? Who gave them that money in order to run those ads? And I think that would be a great question for somebody to dig to the bottom of," Huckabee said of the largest attack ad campaigns thus far in the Republican primary. Then to sweeten the pot, the presidential candidate ominously suggested dirty tricks from one of his political rivals. "I have to think it may be one of the other candidates," he said.

The Huckabee challenge -- solve the Case of the Huck Attack -- sounded at first like a real grade-A mystery. But under the surface, something was afoot. As readers of noir fiction know, the client who walks into the detective's office is often concealing as much as he reveals. In the case of Huckabee, the national television challenge amounted to little more than a red herring to throw voters off the scent. The real culprit of the attack ads lay not in the dark corners of a rival campaign, but in the backwater squabbles of Arkansas Republican politics.

In fact, at the time of Huckabee's challenge, the political chattering class in Arkansas was already well aware of the probable culprit behind the Club for Growth's decision to run costly advertisements against Huckabee. The ads had been paid for by a spin-off group called Club for Growth.net, which files regular disclosures through the Internal Revenue Service. A quick review of those filings showed that the group had taken in no new money in 2007. But in the second half of 2006, a Little Rock neighbor and political rival of Huckabee's named Jackson T. "Steve" Stephens Jr. had given the group $125,000, including a $50,000 check just days before the 2006 election, when it was too late to spend more on that election. A member of one of Arkansas' richest families, Stephens also serves as chairman of Club for Growth.net, along with his Arkansas business associate, Gary Faulkner. The group's only other six-figure donor in 2006 was John Childs, a secretive, Boston-based financier and longtime Club for Growth funder, who has also given money to Mitt Romney's campaign.

Though the group did take other contributions, interviews with a half dozen politicos in Arkansas, most of whom did not want to be quoted, filled in the rest of the story. The battle between Huckabee and Stephens dates back a decade and focuses mostly on their disagreements over the best fiscal policy for the state and the local Republican Party.

Huckabee governed as a fiscal moderate; while he cut taxes, he also raised taxes to increase spending on education and highway construction. Stephens, a prominent Arkansas Republican and one of the heirs of an investment banking fortune, is also well known as a supporter and board member of the conservative Club for Growth, which makes a practice of attacking Republicans who do not hew strictly to tax-cutting fiscal policies. Stephens never made any secret of his displeasure at Huckabee's actions. In 2002, Huckabee decided to oppose a voter initiative to eliminate the state sales tax on groceries and medicine, an effort that Stephens was helping to fund. Tensions got so bad between the two Republicans that Stephens openly considered challenging Huckabee's reelection as governor by entering that year's Republican primary, telling a local newspaper that Huckabee had become a "tax and spender."

When contacted by Salon, Stephens declined to speak about his role in funding the anti-Huckabee ads, though he did voice his approval. "The Club for Growth does its homework, and I will continue to support what they do," he said. The group has criticized other Republican candidates for their fiscal records, but only run ads against Huckabee, who has been ticking up in the national polls in recent weeks.

In fact, the Case of the Huck Attack was so easy to solve that it presented a second mystery -- the Case of the Coy Candidate. Why was Huckabee going on national television claiming not to know what everyone else knew about his old political foe in Arkansas? And what business did he have impugning the reputations of his rival candidates by suggesting that they were surreptitiously, if not illegally, using a third party to smear him?

In a conference call with reporters late last week, Huckabee was asked what he thought about Stephens' role in the Club for Growth's anti-Huckabee campaign, which was expanded last week to include a new Web site, TaxHikeMike.org. Huckabee again repeated his claim that he did not know who was behind the campaign, an information deficit that would make him unique in Arkansas political circles. "I hope he is not involved in the Club for Growth stuff," Huckabee said about Stephens. "I would be disappointed and I would be wondering why."

At the same time, Huckabee made it clear that he was very familiar with Stephens' other political work. On the conference call, Huckabee boasted of pushing through a state education reform initiative that Stephens supported and enacting other reforms from an advisory panel on which Stephens served. He also mentioned that both Stephens' brother and cousin were supporters of the Huckabee for President campaign. "He ought to love me," Huckabee said.

The betting money believes Huckabee knows full well that he is searching for love in all the wrong places. But given the choice of responding to an attack ad and demonizing its backers on national television, Huckabee made the politically prudent choice. He would rather make a mystery out of the obvious. Rather than get bogged down in a discussion of his mixed record as a fiscal conservative in Arkansas, he chose to go on national television and announce a nationwide manhunt for a faceless villain.