CBS's new reality show "Kid Nation" lets kids run rampant -- with nary an adult in sight. Is that really so bad? 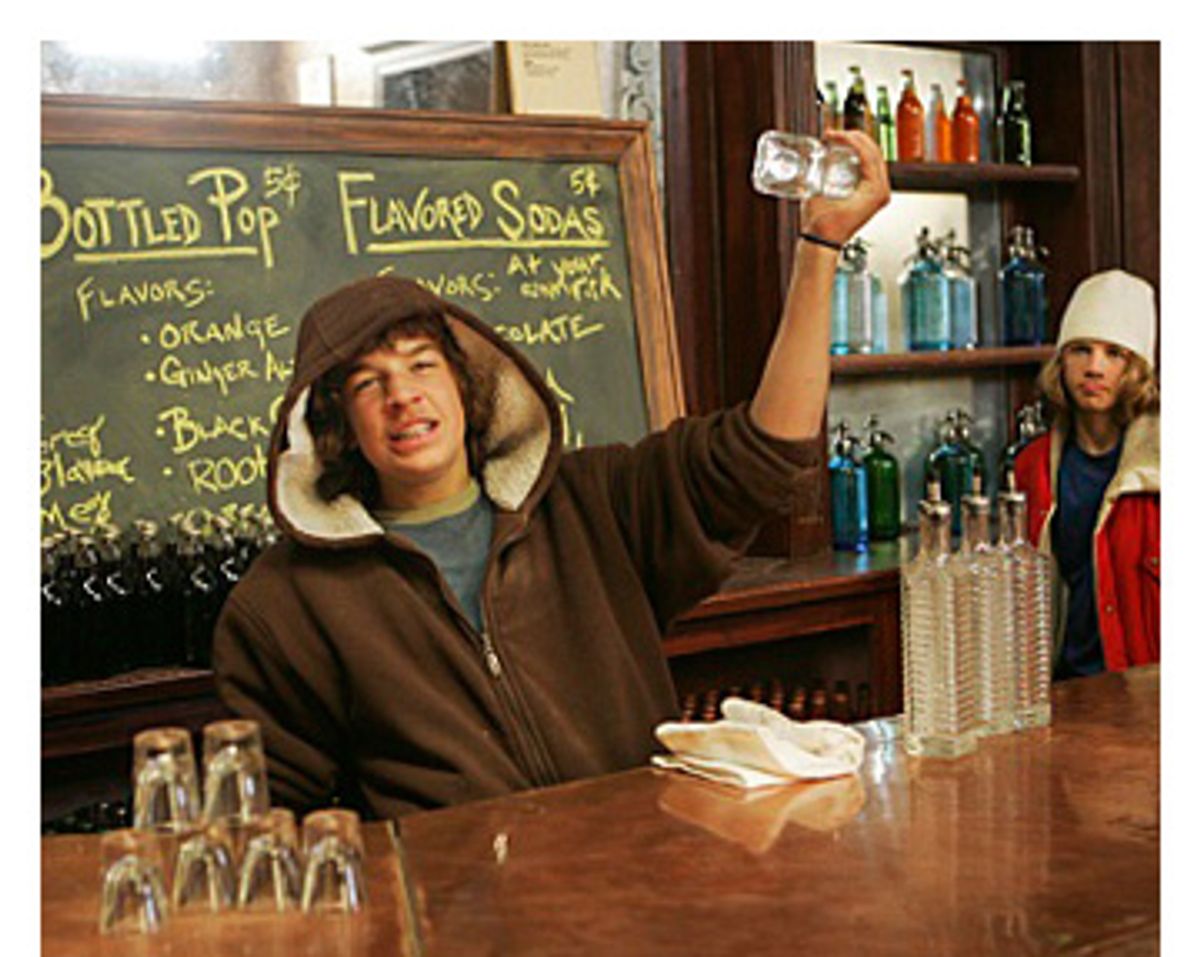 At many summer camps these days, the letter home has gotten an upgrade: Parents who can't wait three days for their children's letters to arrive can instead request they be faxed the day they are written. For those even more desperate to stay in touch, camps provide streaming video from the dining hall and a constantly updated portfolio of online photos, available for purchase, of course.

"Some parents log on 10 times a day," one service provider told the Wall Street Journal when the phenomenon first grabbed attention. Who's surprised? This is, after all, the generation of parents who phone professors about their children's bad grades, phone their children's potential employers, and keep in constant cellphone contact with the kids themselves, many of whom won't make even minor decisions without first calling mom. These are the parents who buy crib cams and nanny cams; they use software that monitors MySpace pages and shoots them text messages when their kids get cell calls from unknown numbers. They attach a GPS receiver to the family car. They are hell-bent on preventing their kids from ever detaching -- from growing up, really -- and for that they have earned themselves the catchy name of "helicopter parents."

Which was why it was such a relief to see that in the premiere of the CBS reality show "Kid Nation," the only helicopter evident was the one that alit on a dusty plain in New Mexico, delivering children to the ghost town of Bonanza City. The program is presented as a social experiment of sorts: Can 40 kids aged 8 through 15 resurrect an abandoned mining town over 40 days, free from parents, teachers, bedtime, rules?

"Kid Nation" received a ton of press before it aired, nearly all of it of the what-were-they-thinking variety. A loophole in New Mexico law, since closed, allowed the producers to define the show as a summer camp, rather than a place of employment, so child labor laws did not apply. The cameras rolled morning till midnight, except when the children were on the toilet or changing clothes.

Given that parents these days are unlikely to let their children explore the neighborhood playground unsupervised for 40 minutes -- they might fall, they might be kidnapped, they might be asked their screen name -- setting them loose in a ghost town for 40 days was an unimaginably bold idea. Could today's coddled kids even hack it? Could they create their own society without their parents around to help? Could they forge relationships without the benefit of instant messaging? Could they make macaroni?

Even those of us who bemoan the infantilization of today's youth by their parents cringed when, during the premiere, the first match sparked the cooking fire. But still, a minor injury -- and there were a few, according to reports --seems worth it to show that kids can manage quite well, thank you, once the helicopters have flown off.

Adults were around, of course. On any reality show, producers are never far, psychologists too. The children were allowed to go home if they wanted. Still, you had to wonder about the ethics of the whole thing when a 9-year-old named Alex arrived in Bonanza City and said, "I felt sorta weird because I thought maybe there would be adults." You had to wonder as well why parents would ink a 22-page contract (posted on the Smoking Gun) that warns their child might be exposed to avalanches and drowning, that bars any contact with parents, that includes the phrase "should they be killed," and that signs away rights to the child's "Life Story" in perpetuity, a story that may be modified any way the producers see fit "to achieve a humorous or satirical effect."

But can we put the ethics aside for now? Anytime a minor is put in front of a camera, something exploitive is occurring. Americans seem to have accepted children on-screen anyway, from the bratty child brides and emotionless grooms of "Engaged and Underage" to the grating know-it-alls on "Are You Smarter Than a 5th Grader?"

The "Kid Nation" gang comes across no worse, and in some ways far better. Supposedly they are average kids. According to the bios they wrote for the CBS Web site, they are into ponies and pizza, knowledge bowl and "Dance Dance Revolution," birthday cake ice cream and sushi. They want you all to take heed of global warming and buy Energy Star appliances. The majority thinks George W. Bush is the worst president ever, "no offense to Mr. Bush."

That they skew a bit to the precocious side is either good casting or a good sign for today's youth. For every blast of childishness on the premiere, there's a healthy dose of maturity or ingenuity. Jared spent most of his "salary" on a massive hunk of chocolate; when Sophia's wages couldn't pay for the bicycle she wanted, she earned the rest by dancing in the road, a tip jar at her feet. When the oldest boys graffitied their team name in chalk on every sign they could find, the 9-year-olds scoffed that the prank was "juvenile." After a toughie named Greg shoved a grating boy named Mike in front of the group, Mike called out the bully privately. It's reality TV, so you expect a confrontation, but Mike handled the matter surprisingly well. "I just wanna make sure we're cool," he said to the boy four years his elder, and they shook on it. (And you thought character education in schools was a waste of time.) Every time the group devolved into screaming, there was always someone who shouted louder than everyone else and segued into an inspiring speech about leadership.

"Leadership" is a term today's kids hear awfully frequently; it is simultaneously a squishy concept and, they are given the sense, the ultimate ideal. The children of "Kid Nation" spend a lot of time talking about what makes a good leader, and the four young members of the preselected Town Council, which runs the place, frequently congratulate themselves for possessing those qualities, though at some point you wish they would all shut up and just do the dishes.

One Town Council member, 12-year-old Laurel, never made reference to leadership skills in the premiere; she just displayed them, in touching ways. She told a homesick 8-year-old that he was "really cool and really awesome," and that she'd be happy to stand in for the parents he so missed if he'd like. Optimistic but never cloying, she instigated group hugs and comfort. Laurel is Irish, she proclaimed proudly, and if the peace process there ever fails, this girl should go to Belfast.

More than Belfast, though -- more than any other place in the world -- Laurel wrote in her bio that she would rather go back to Bonanza City. This from a girl who "always thought that if I don't get that new Louis Vuitton bag, there's no way I could go to school. But I was the happiest I ever was in my entire life when I didn't have anything."

Because today's kids rarely take a long car trip without a DVD playing in their face, you'd be forgiven if you teared up when the Town Council chose a reward of extra outhouses -- there had been only one for the 40 of them -- over a television set, and the other kids exploded with joy. Bonanza City may have a root beer saloon and a general store filled with candy, but there are no iPods, or even beds. (Particularly intriguing coming the day after a Washington Post story featured colleges outfitting dorm rooms with double beds, because kids find them more comfy than twins.) Many parents no longer make children do dishes or hold after-school jobs -- they work hard enough, the argument goes, trying to get into college -- so it is no small deal to watch the "Kid Nation" gang lug heavy wood carts for miles and cook biscuits without a recipe.

But they are of this world after all. While the girls cooked, the boys banged the table and hooted for "pasta! pasta! pasta!" and then went off to throw rocks at jackrabbits.

Kid Nation is a meritocracy, at least so far: Even though wry Sophia was the only child to profess dissatisfaction with the Town Council members, they awarded her the episode's solid-gold star, because she worked the hardest. The star is worth $20,000, a revelation that not only flabbergasted Sophia but seemed to energize the entire group. And this is where "Kid Nation" disappoints. Immediately, the kids trained their eye on the prize, just like in school, just like at home. Any notion that this experiment was utterly unlike computer camp or Stanley Kaplan or a soccer traveling team, that children would be freed from the forced march toward Betterment and motivated by nothing more than doing well, completely evaporated.

What's worse is the reward that followed: For winning the gold star, Sophia got to call home to her mommy.

Linda Perlstein is the author of "Tested: One American School Struggles to Make the Grade" and "Not Much Just Chillin’: The Hidden Lives of Middle School."