An MIT student wanted to stand out on career day by wearing a jacket that lights up. Airport cops nearly killed her for it. 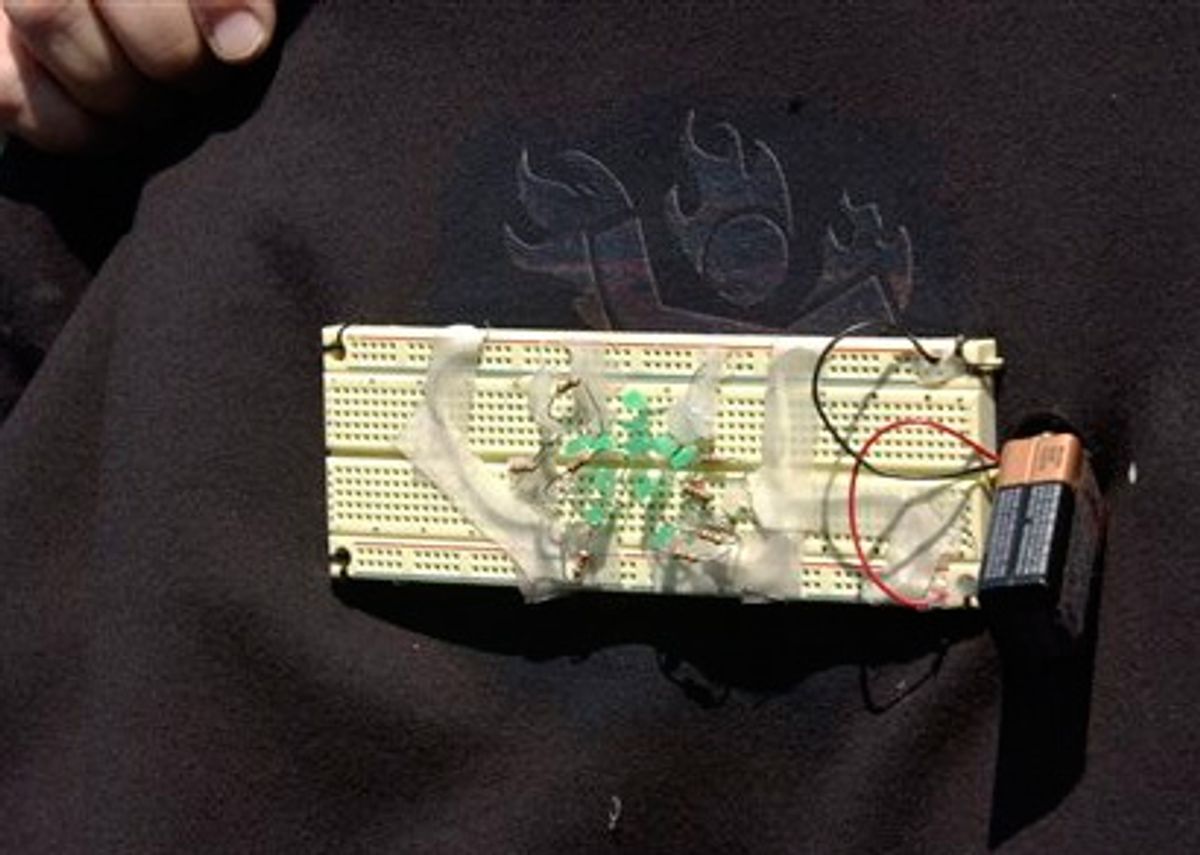 Star Simpson, a 19-year-old MIT student, was arrested at gunpoint Friday morning at Boston's Logan Airport when officers suspected that a circuit board and battery she had pinned to her sweatshirt was a bomb. Indeed, every news outlet is now referring to the thing as a "fake bomb," and Simpson has been charged with possessing a "hoax device."

But pictures of the sweatshirt that officials are putting out show something quite less scary -- I have no idea what a real bomb looks like, but I don't think it's a plastic board with a 9-volt battery on it. Simpson's explanation is that the jacket was a wearable-art project she made so she could stand out at her school's career day (the plastic board lights up). All information now streaming in supports that view, and suggests that the affair could have been a misunderstanding, one that very nearly turned tragic.

This is my speculation only, but it seems quite possible that rather than intending to deliberately walk into Logan with a fake bomb, Simpson might instead have rolled out of bed with an art jacket she often wore around campus and slipped it on in a rush on her way to pick up a friend -- forgetting that she was heading into the all-fear-all-the-time black hole that is U.S. aviation.

What's the evidence for this? For one thing, as Xeni Jardin points out in Boing Boing's marvelous roundup on the story, Simpson is much into making cool, out-there techie stuff, things like a jacket that lights up. Her own Web site is currently offline -- click here later -- but you can check out some of Simpson's handiwork at her Instructables profile and look here for one of her recent school projects.

Simpson describes herself this way on the Web:

In a sentence, I'm an inventor, artist, engineer, and student, I love to build things and I love crazy ideas.

In a paragraph; I'm currently studying computers and how they work at MIT. I play at a student-run machine shop called MITERS. Before that, I lived for a long time in Hawaii, while traveling the world and saving the planet from evil villains with my delivered-just-in-time gadgets.

A woman from Instructables.com who knows Simpson tells Boing Boing that Simpson's friends at MIT "say she wears the hoodie on a regular basis -- it's just unfortunate that she had it on while trying to pick a friend up at the airport. MIT students don't really do mornings, or worry about what they're wearing, so I can't imagine she'd even think about her clothes before heading out to pick up a friend at the airport before 8 a.m."

Cops are pointing darkly to strange text scrawled on the jacket -- "Socket To Me / COURSE VI." Guess what, "Course VI" is a reference to MIT's electrical engineering course, not an al-Qaida code name.

WBZ-TV has posted a video of Simpson being arraigned this morning. The student looks in good spirits despite what must have been a nightmare of a morning. She pleaded not guilty and was let free on $750 bail, but if convicted of the charges she could face up to five years in prison and a $5,000 fine.

It could have been much, much worse. In a press conference state police Maj. Scott Pare said that Simpson is "extremely lucky she followed the instructions or deadly force would have been used. She's lucky to be in a cell as opposed to the morgue."

Damn. Had it not been for the six years we've already lived through irrational, useless, annoying, psychologically defeating overeager airport security -- put in place to prevent an event that could have been solved by a single measure, locking the cockpit doors -- the prospect of a promising young student being killed by cops for wearing a battery on her back might come as a shock.

But now it elicits almost no surprise. What, police at a major airport were about to kill someone for the crime of wearing a circuit board? Yeah, what else is new.