Sean Penn's adaptation of Jon Krakauer's book about a privileged kid's strange, sad quest to find himself is at times quite touching. 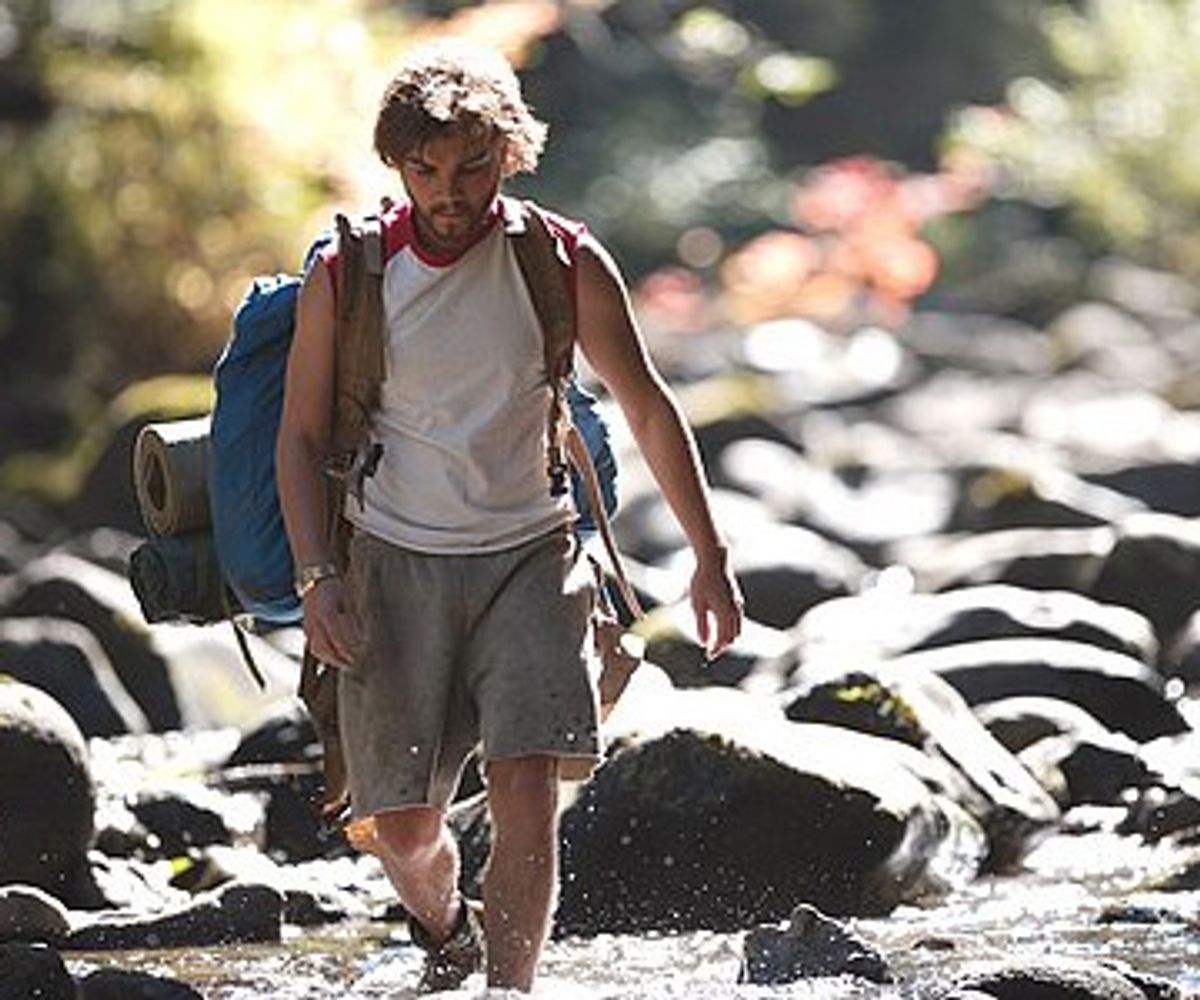 In "Into the Wild," one minute disillusioned rich kid Christopher McCandless -- played by a sullen Emile Hirsch -- is scoffing at his parents' offer of a new car as a graduation present. The next he's in a remote corner of Alaska gnawing on a reddish, stiffened squirrel shape, its legs splayed in an approximation of a plea for mercy. In an admirable display of American self-sufficiency, Chris has shot, skinned and roasted the critter himself, proving there are some things money can't buy. For everything else, there's MasterCard, and thank God for that.

Sean Penn's "Into the Wild" is adapted from Jon Krakauer's bestseller of the same name, detailing McCandless' strange and sad journey, one that began with his upbringing in an affluent, if troubled, Atlanta family and ended with his death from starvation in an abandoned bus somewhere in the Alaskan wilderness. Repulsed by his parents' materialism and seeking some greater truth, McCandless took off on a road trip after graduating from Emory University in 1992. As far as his family was concerned, he disappeared: His parents had no idea where he'd gone, and they never again saw him alive.

McCandless set out to find himself by traveling and living off the land; his inexperience and naiveté eventually led to his death. That's a sad story no matter how you look at it, especially for his surviving parents. (Krakauer ceded his book's film rights to McCandless' parents, and Penn waited years for them to agree to let him make the movie.)

The story Penn has made from Krakauer's book is sometimes absorbing and occasionally quite touching. And Penn is perceptive enough to see that the act of "finding oneself" isn't necessarily just a groovy, harmless quest; it can also be a profoundly manipulative act, a way of cutting deeply into the people who love you most. But it takes Penn too long to tease the really interesting (and somewhat dark) observations out of McCandless' story. Much of "Into the Wild" celebrates nature in a way that isn't far off from the pat reverence of old Sunday-evening nature shows: We get shots of snow-dotted Alaskan vistas, of majestic, cracked desert landscapes. (The cinematographer is Eric Gautier, who has frequently collaborated with French filmmaker Olivier Assayas, on pictures like "Clean" and "Irma Vep.") At one point Chris raises his gun to shoot some sort of gargantuan Alaskan furball, only to lower it respectfully, solemnly, when he realizes the creature is grazing with her baby -- which is only right, but the moment is staged in a way that feels straight out of Awe of Nature 101. There are many self-serious voice-overs; there's much quoting of Thoreau. On the soundtrack Eddie Vedder trills, with alarming sincerity, about the wonders of nature and of self-discovery. Too much of "Into the Wild" is reminiscent of, as Alice Cooper once put it, those songs about how good water tastes.

But if you strip some of that dewy-eyed nature worship from "Into the Wild," it becomes clear that Penn cares deeply about presenting this spoiled, privileged, misguided kid as someone we should care about. (You have to have a pretty huge ego to rename yourself Alexander Supertramp, as Chris does in an attempt to shed the skin of his old self.) He's also sensitive to the suffering of Chris' parents, played by William Hurt and Marcia Gay Harden. At the beginning of the picture, I feared they were going to be nothing more than stiff cutouts, doomed to smoothing napkins on the dinner table or swirling the ice in their drinks. Harden, in her matronly suits and beauty-parlor bubble hairdo, at first seemed to be playing only an idea of a shallow Southern mom, rather than a person. But Penn ultimately allows us to see his parents as Chris can't see them, as flawed human beings who nevertheless loved their kids as best they could. (Chris' sister, Carine, is played by Jena Malone.)

Penn -- who adapted the screenplay himself -- shows how even as Chris rejects his real family, and pretends he wants only self-sufficiency and communion with nature, he keeps gravitating to surrogate families on the road: Vince Vaughn, in a strapping, garrulous performance, plays a resourceful (and slightly crooked) odd-jobs guy in a country town, who gives Chris an opportunity to make a bit of money and also tries to talk him out of some of his immature resentments. Catherine Keener and Brian Dierker (the latter a nonprofessional actor -- he's also the movie's marine coordinator -- who gives a sweet, unfussy performance) play a hippie couple who temporarily take Chris under their wing. They're wonderful characters because even though they take to Chris immediately, they refuse to stroke his king-size self-pity. At one point Keener's character remonstrates with Chris when he dismisses his parents as if they don't exist. "You look like a loved kid," she tells him without a hint of superiority. "Be fair."

"Into the Wild" is essentially humorless: Chris' encounter with a couple of Swedish tourists, one of them a curvy beauty who lounges boldly on a Colorado riverbank sans bikini top, is one of the few places the movie even flirts with levity. But even then, Chris seems only slightly amused by these amazing Swedish breasts; there's something inert, almost neuter, about him. In a hippie trailer town, he also meets up with a very young singer-songwriter (played by Kristen Stewart, in a sturdy, sensitive performance) who offers herself freely; he nobly declines on the grounds that she's too young, but you get the feeling he's not that interested anyway.

In fact, all through the movie, Chris -- supposedly interested more in souls and people than in money -- seems not just detached from life but disinterested in it. Detachment, at least, can be active as well as passive. Disinterest is just boring. Even when Chris is supposedly connecting with people -- the hippie surrogate mom played by Keener; the creaky, kind leather worker played by Hal Holbrook, who has a few small, affecting moments but also a few overworked ones -- there's something blank and uncomprehending about his face.

I can't be sure if that's Hirsch's reading of the character or simply his inability to communicate, period. I've tried to like Hirsch in the past, but I just can't see much in his eyes. (And in parts of "Into the Wild," the eyes are all we've got to go on: Chris, far from civilization and thus razors, sports some pretty woolly wild-man facial hair.) He has a pouty adolescent quality that's serviceable, though it's the sort of thing an actor has to get over, not try to pass off as an acting style.

Maybe I just never recovered from watching Hirsch bite the head off a live chicken -- simulated, but still -- in a small, little-seen indie called "The Mudge Boy." It's the kind of thing that often gets lauded as a brave performance, but Hirsch is so opaque that he didn't make me understand why even a deeply troubled kid would off his beloved pet chicken in that way. In "Into the Wild," Hirsch is even more remote than the wilderness he treks into, which may be precisely the point: Chris was lost even before he was lost. But if nature -- if life -- is as wild and precious as the movie makes it out to be, Hirsch needs to give us something, someone, to watch on-screen. We need to feel a presence before we can take the measure of an absence.