The Iranian leader's visit to Columbia provoked outcry, support and a twist on free speech: "We're glad you're here -- so we can tell you you're an asshole." 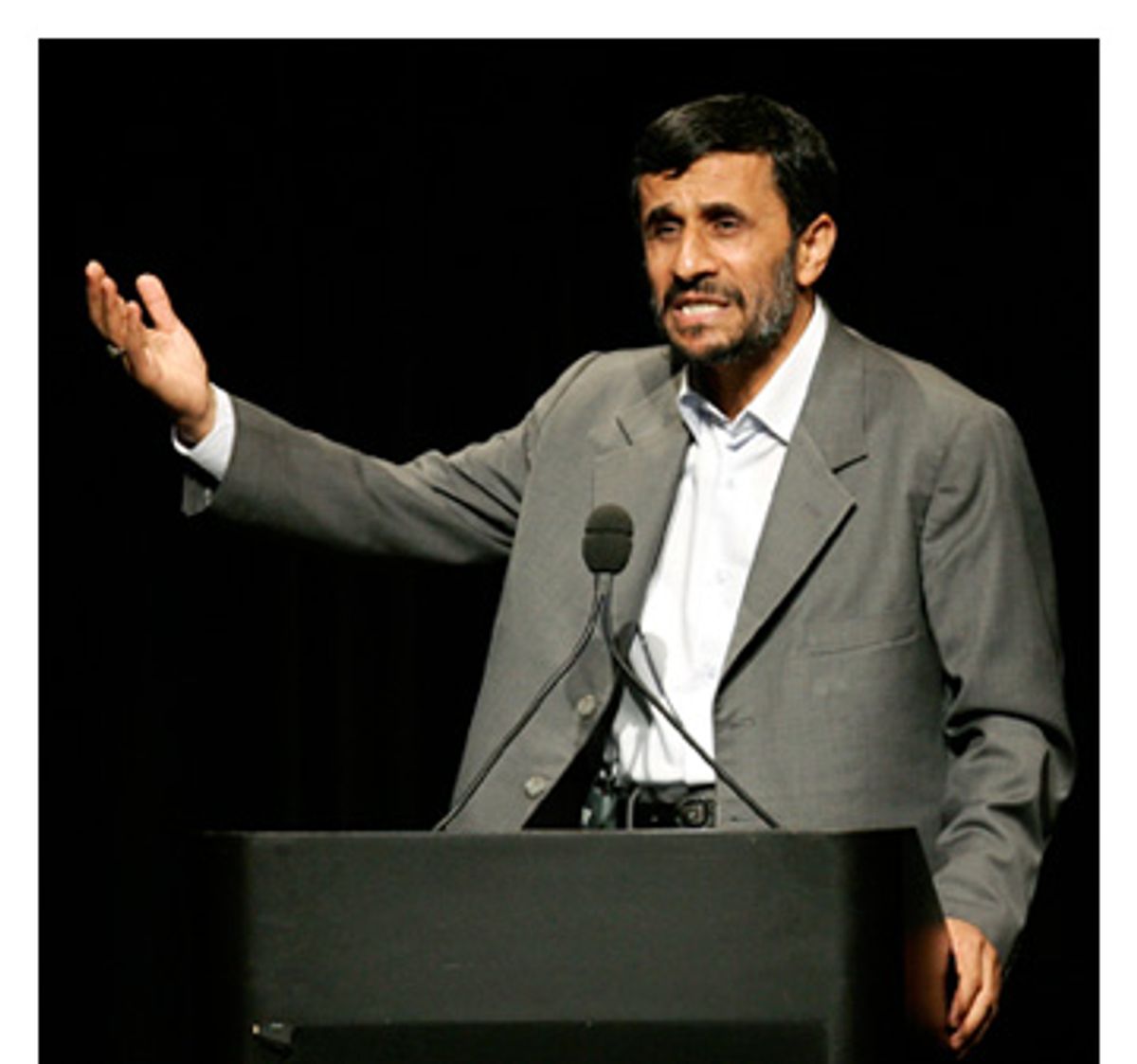 On an ordinary day Columbia University is something of an oasis, a relatively tranquil place where it is possible to forget for a moment the surrounding noise and chaos that is New York City. That held true on Monday, even as the national media turned its attention on the visit to campus of Iranian President Mahmoud Ahmadinejad, and as loud demonstrations took place at the United Nations Building in midtown Manhattan and around Columbia itself.

There were makeshift signs, both against and in support of Ahmadinejad's appearance, scattered all over the campus area where a simulcast of his appearance was broadcast. Many students wore black shirts distributed for protesting the event. The front contained a quote from Edmund Burke, the 18th-century Irish conservative: "All that is necessary for the triumph of evil is that good men do nothing." The back read, "Stop Ahmadinejad's EVIL, Columbia Students United AGAINST AHMADINEJAD."

Yet the atmosphere was respectful and quietly attentive during the forum hosted by Columbia president Lee C. Bollinger, who has taken much heat publicly in recent days for opening the campus to Ahmadinejad. In his introductory remarks Bollinger emphasized free speech and vigorous debate as the reasons for welcoming the Iranian leader -- before unleashing a full-throated denunciation of Ahmadinejad on issues ranging from Iran's execution of dissidents and children to Ahmadinejad's denials of the Holocaust. "Today I feel all the weight of the modern civilized world yearning to express the revulsion at what you stand for," Bollinger said, before turning over the stage.

Ben Berger, a freshman at Columbia, who wore an Israeli flag on his back, said before the event that of all the valid reasons to protest, "the reason closest to my heart is Israel. That's why I'm wearing the flag." He said he did not oppose the invitation to Ahmadinejad, however. "I think is it good there is free speech so we can have the opportunity to protest what is such a terrible regime."

Ali Sadijhian, a 28-year-old graduate student originally from Iran who has been in the United States for four years, said that he supported the invitation. "First of all, I think it's a good idea for American people to see our president, to hear what he says. They have heard all the bad things of him; by getting more exposed they may see some of the good things he has done," Sadijhian said. "Look, I come from a country where such a thing cannot happen," he added. "What I find disturbing is that I'm somewhere that claims we listen to all ideas, but really, when it comes to certain ideas, we don't listen. We listen to people who do worse things than the Iranian president, but we don't want to listen to the Iranian president -- that's when I have a problem."

Ellen Miller, a sophomore at Barnard, a women's college affiliated with the university, carried a sign representative of others who supported Ahmadinejad's presence, albeit in a different way: "We're glad you're here -- so we can tell you you're an asshole," the sign read.

"You can't have freedom of speech if you don't invite everyone to speak," Miller said, "and I think that it actually -- look at the reaction, it's so much bigger. These groups would not have come together and come out like this and protested if there hadn't been this event on campus. I think the reaction it created was exactly what Columbia University would have hoped for by inviting him."

Bollinger's introductory speech prompted a standing ovation from many in the audience. It also seemed to surprise Ahmadinejad and put him on the defensive. After a recitation of verses from the Koran, the Muslim holy text, Ahmadinejad launched into his own criticism of Columbia's head. The Q&A session that followed was equally contentious, with Ahmadinejad deflecting questions about his animosity toward Israel and the Iranian regime's treatment of women and homosexuals.

After the event students expressed admiration for their president. "I was really excited that President Bollinger really asked some tough questions, he was very forward, and I really appreciated that. I think he had a lot of courage," said Columbia freshman Ben Landy. "I think this whole forum celebrates the First Amendment."

Rachel Levine, a Columbia senior, said, "I still don't think he should have been invited, but I think that the fact that he was invited can be channeled to something positive and I think will be used as an opportunity to spark creative discussion and raise awareness on campus."

Protests beyond Columbia on Monday were not so refined and academic in nature. Earlier in the day, around noon, a gathering filled much of a large block near the United Nations Building. The crowd included numerous students from Jewish day schools who had been bused in for the event. Most of them seemed to be viewing the demonstration as a field trip or chance to socialize.

But on the whole, the protest had a shrill tone. A flurry of neon-green signs depicted Ahmadinejad, in his trademark suit jacket and open shirt, with his mouth open and his arms, legs, feet and clenched fists elongated and twisted into the form of a swastika. Red tape formed a diagonal line over him. A large banner held by protesters near the front of the crowd read, "We will NOT Forget the Holocaust or 9/11!"

Rhetoric from several Democratic congressional representatives from the area was no less strident. Speakers -- including Sen. Robert Menendez of New Jersey, Rep. Jerrold Nadler of New York and Rep. Carolyn Maloney of New York -- excoriated Ahmadinejad as well as both the United Nations and Columbia for allowing the Iranian president to speak. Rep. Elliot Engel of New York, another Democrat, told the crowd that the United Nations had discredited itself by having Ahmadinejad speak, and that instead Ahmadinejad should have been arrested for terrorism once he set foot inside New York City. Nadler said, "I never thought another man would arise who it would be fair to compare to Adolf Hitler."

Adding a twist to the day's events, a small group of counter-protesters assembled at the end of the crowd, away from the podium where the lawmakers spoke. Ahmadinejad himself may have appreciated the message of the dozen or so ultra-Orthodox Jews assembled, who believe Israel has no right to exist until the coming of the Messiah. They carried signs advertising the Web site of an organization called "Jews United Against Zionism." One read, "'Israel' has no right to take over any part of the Holy Land," while another, showing an Israeli flag crossed out, stated, "Judaism condemns Zionist provocations against Iran."