Iraq and roll over

Why the antiwar surge failed in Congress. 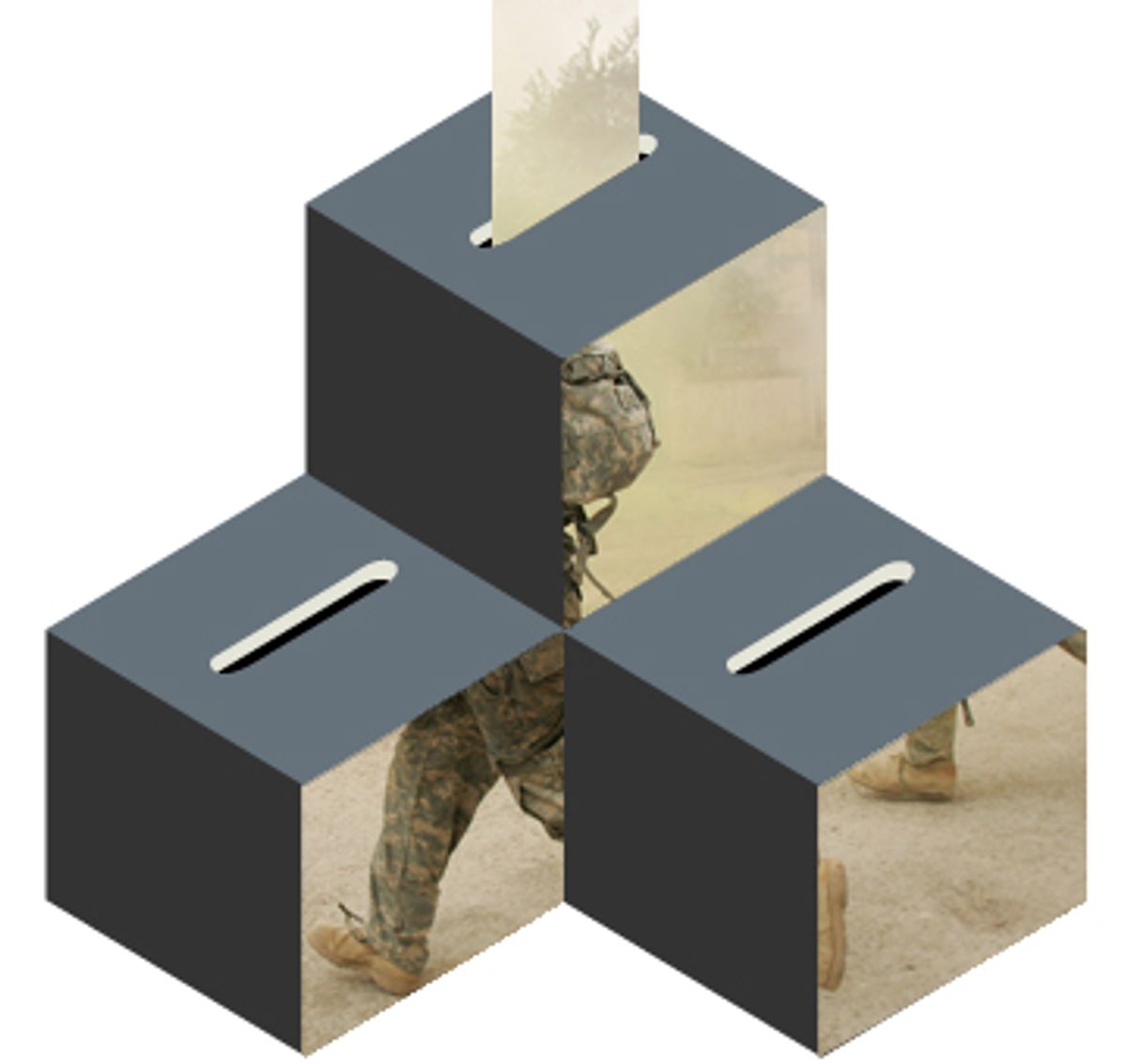 It is time to face the blunt truth: This Congress, despite its nominal Democratic majorities, is not going to hasten the end of the Iraq war. This is not defeatism on the home front nor is it a rant against the accommodationist tactics of Senate Majority Leader Harry Reid. Rather, this inescapable conclusion is based on the coin of the realm on Capitol Hill -- the stark arithmetic of head counts.

Any ambiguity was put to rest last week by a series of Senate votes on the Pentagon spending bill that demonstrated that the Republican Party remains immune to any surge in antiwar sentiment. Six GOP votes were the high-water mark; they were cast in favor of a ballyhooed amendment (sponsored by Virginia freshman Democrat Jim Webb) to prompt a back-door drawdown in troops by limiting the duration of deployments to Iraq. But not a single Republican supported legislation advanced by Reid and Wisconsin's Russ Feingold to mandate a funding cutoff for most U.S. troops in Iraq by next summer. Reid-Feingold -- the most explicit expression of antiwar sentiment -- lost by a lopsided vote of 70-28, virtually the same margin as back in May.

Favoring gauzy spin over gimlet-eyed reality, some liberal Web sites tried to portray some of the Senate votes as majority triumphs (the Webb measure won 56 supporters) thwarted only by undemocratic filibuster rules (60 votes are needed to choke off debate). But that interpretation glosses over one of the rare constitutional provisions that the Bush White House still worships -- the presidential veto power. Even if a war-limitation amendment somehow made it through Congress (currently a dubious proposition), to overturn a Bush veto Democrats would have to corral 50 GOP votes in the House and 17 in the Senate (not counting über-hawk independent Joe Lieberman). And that calculus is based on the Panglossian assumption that House Democrats from conservative areas like southern Indiana would ever be willing to buck the White House on a vote that would be portrayed in Republican attack ads as not funding the troops in wartime.

More than nine months after taking power, about all that Reid and House Speaker Nancy Pelosi have achieved on the Iraq front is to unfairly share in the blame for mismanaging the conflict. A mid-September CBS News Poll found that only 31 percent of voters approve of the way that "Democrats in Congress are handling the situation with Iraq." (About the only consolation for Democrats is that George W. Bush's approval rating on the same question was 25 percent.) More ominous for Reid and Pelosi was a poll by the Pew Research Center for the People and the Press released last week, which found that 61 percent of Democrats surveyed believe their party's leaders in Congress are not going "far enough" in challenging Bush policies in Iraq.

Whether held by Code Pink demonstrators in Washington or rank-and-file Democrats who will be attending the Iowa caucuses, these stop-dithering-and-stop-the-war passions fuel unfortunate misconceptions. Pelosi, in particular, erred in unduly raising antiwar expectations when she took over as the first Democratic speaker in a dozen years. It was the Gingrich Revolution in reverse, this time with Democrats failing to appreciate the balance-of-power realities of a congressional showdown with an unyielding president, however wounded.

In the Senate, Reid is majority leader by the frailest of margins -- literally, Lieberman's vote as an independent who caucuses with the Democrats. The notion -- often raised by bloggers and activists -- that Reid could defeat a filibuster by forcing the Senate to stay in session 24/7 is as ludicrous as requiring Republicans to stand on one foot and quack like a duck as they voted. A Senate leader employs a heavy hand only when he has the votes; otherwise he must rule by persuasion. Reid may not be the most artful of majority leaders, but his strategic error (and he had few other options) was believing that he could win the votes of enough wavering Republicans to make a difference on moderate antiwar measures.

But last week retiring Virginia Republican patriarch John Warner abandoned Reid on the Webb amendment and three endangered Republican incumbents -- Susan Collins of Maine, Minnesota's Norm Coleman and John Sununu of New Hampshire -- balked at voting for a withdrawal plan, even without a mandatory funding cutoff. There is no mystery here. Since the days of Cicero legislators have earned public credit for rhetorical outrage, while not following their words with uncomfortable votes. Hopeful Democrats and the media may have been gulled by Republicans asking skeptical questions at Iraq hearings and even giving floor speeches calling the surge a failure (as veteran Indiana Republican Richard Lugar did in June) before sticking with the president when it counted.

Both sides in the Iraq debate have brandished polls as if they were cudgels. But for all the unwarranted silent-majority claims of Dick Cheney and his claque, antiwar warriors too are prone to hyperbolic claims of a polling mandate. It is easy for liberals, in their own version of a bunker mentality, to convince themselves that every American who did not attend Karl Rove's farewell party is unalterably committed to immediate withdrawal from Iraq.

In truth, a large segment of public opinion remains in the mushy middle about an Iraqi exit strategy, with exact proportions varying with the wording of poll questions. The CBS Poll found that a 49 percent plurality of those surveyed supports getting out of Iraq within a year, but another 40 percent are willing to stay longer. By coming at the what-next question with different options, the Pew Center survey found that 18 percent favor removing "all troops immediately," 34 percent support graduated withdrawal over "the next year or two," 14 percent say that we should stay in Iraq with an unspecified timetable for withdrawal, and 29 percent believe we should keep troops in Iraq without any departure schedule.

Virtually any politician in either party who has ever uttered a skeptical word in public about the mess in Mesopotamia can find survey data to support a claim of being in lock step with public opinion. Small wonder that Republicans in tight races like Sununu and Coleman believe that they can feign being Iraq critics, while still voting against almost all legislative gambits to move toward phased withdrawal.

With Congress slated to adjourn in mid-November, the clock is fast running out on legislative efforts to reshape the war. Symbolic gestures like "sense of the Senate" resolutions and toothless withdrawal plans -- even if they survive a filibuster -- are unlikely to cow the administration, especially next year when Bush has less than a year left in the Oval Office. Democrats in swing districts will be even more reluctant to engage in a scorched-earth battle with the administration over war funding as the congressional elections draw near.

That is why angry antiwar activists should realize that their targets are no longer skittish congressional Democrats and Beltway insiders who are their counselors in caution. This is not the moment for guerrilla theater and mau-mauing the moderates. For the true struggle on the home front to end the Iraq war is no longer going to be waged in the chambers of Congress. The coming battleground instead is the familiar terrain of Ohio and Florida -- and the hearts and minds of the swing voters who will decide the 2008 election.