Why did Ahmadinejad claim Iran has no homosexuals? It has to do with a quilt. 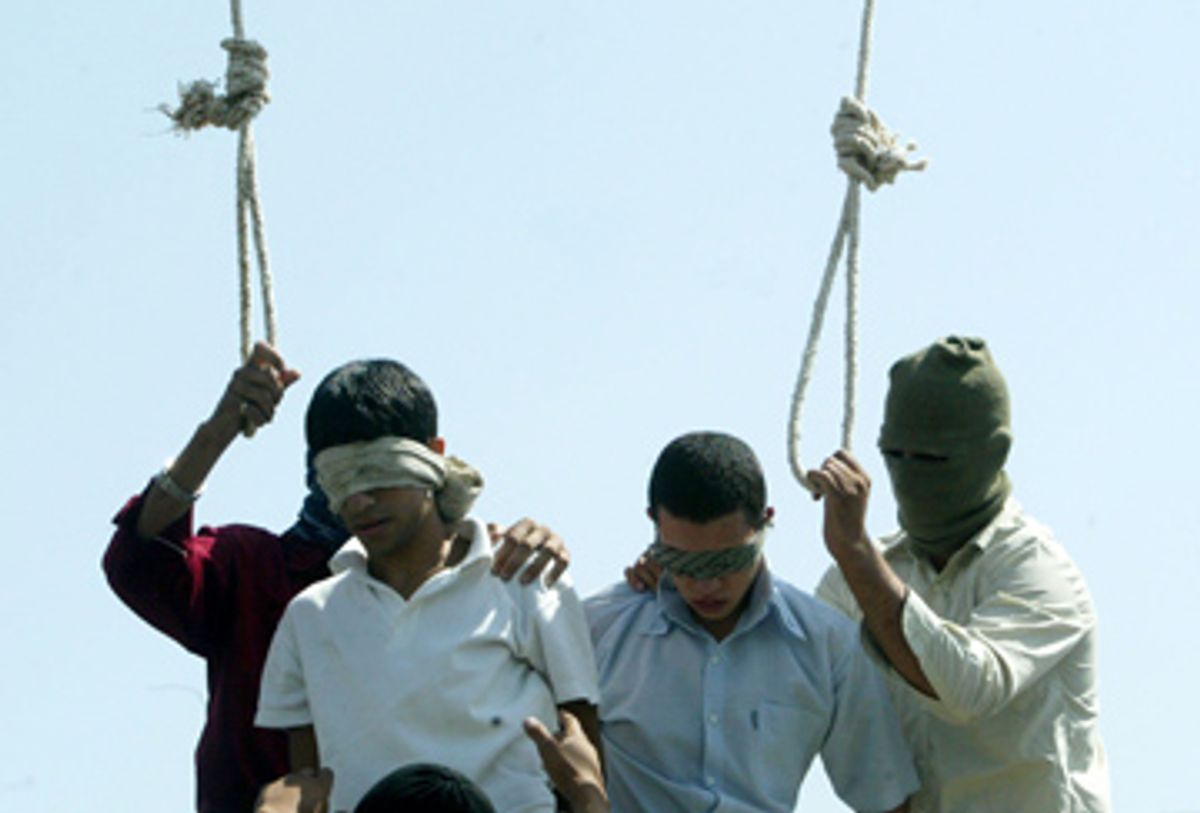 At Columbia University Mahmoud Ahmadinejad established himself as the Great Denier -- of nuclear weapons, the Holocaust and homosexuals. "In Iran, we don't have homosexuals like in your country," he told the audience (see video below). "In Iran we do not have this phenomenon. I don't know who's told you that we have it."

Perhaps it was the ghosts of Ayaz Marhoni and Mahmoud Asgari.

On July 19, 2005, Marhoni and Asgari, both teenagers, were hanged publicly for homosexual sex in the Iranian city of Mashad. That was the year Ahmadinejad became president. Maybe what he meant to say is that in Iran we have no more homosexuals.

The loud, skeptical laughter from the audience showed that while some might still believe that Iran is pursuing nuclear weapons for peaceful purposes, no one bought his homosexual-free zone.

But the problem lay in the question. Ahmadinejad was asked why his country denies women and homosexuals rights. If the questioner had asked the Iranian president about homosexual acts instead of a class of people known as "homosexuals," maybe Ahmadinejad would have conceded the existence of such a "phenomenon."

Iran is not alone in refusing to acknowledge homosexuals. From Uganda to India, many countries, especially ones with colonial histories, try to disown this Western import. (Cricket, Marxism, washing machines, are apparently OK despite their Western roots.)

This thing of darkness, Ahmadinejad seemed to say, I do not accept as mine.

The West always wants to label, classify, order. In the East, to label, classify, order, reveal or name can invite conflict. In 1944, in one of the first obscenity cases in India, famous Urdu writer Ismat Chughtai was hauled before the court for a short story about lesbianism called "The Quilt." It was clear to any reader what was going on under the quilt when a noblewoman and her favorite maid pulled it over themselves at night. "Begam Jan's quilt was once more swaying in the dark like an elephant ... The elephant was making sounds as if it was trying to squat. The sound of someone smacking his lips as if savoring a delicious sauce."

But the court absolved Ismat Chughtai because she never named the act that happened under the quilt. She never took the quilt off. Safely hidden under it, Begum Jan could do whatever she wanted.

Five decades later, Indian-Canadian filmmaker Deepa Mehta pulled the covers off lesbian sex in the film "Fire," where two Delhi housewives are shown not only making love but also wondering what name to call themselves. Theaters were ransacked, screenings disrupted, questions were raised in Parliament. And not just by homophobic religious fundamentalists. "There is a danger that many of those exposed to this controversy will learn to view all such signs of affection through the prism of homosexuality. As a consequence many will feel inhibited in expressing physical fondness for other women for fear of being permanently branded as lesbians," worried Madhu Kishwar, the editor of one of India's most famous feminist magazines, Manushi.

The protection of the quilt was gone. The act of naming is dangerous.

The act of showing is even more so. The soon-to-be-released film version of the bestselling novel "The Kite Runner" is causing a ruckus in Afghanistan for showing the rape of a young boy. The family of the 12-year-old boy actor wants the scene cut. "This is against Afghan culture," the boy's father told the Associated Press.

Yet if there is one country whose culture is imbued with boy-love, it's Afghanistan. Nineteenth-century British explorer Richard Burton wrote in his accounts of travels through the region about "lads almost in women's attire with kohl'd eyes and rouged cheeks." "The cities of Afghanistan and Sindh are thoroughly saturated with Persian vice," wrote Burton, in a blow to both Iran and Afghanistan.

A famous Pathan marching song goes, "There is a boy, across the river with a bottom like a peach. But alas, I can't swim." The Taliban even had an injunction against their fighters taking boys without facial hair into their private quarters.

But when an act is shown on film, it moves from private quarters to the public sphere. It gets a name. It gets an identity. It gets a marker on the Kinsey scale. And you cannot avert your eyes from it. It becomes real.

"The people of Afghanistan do not understand that it's only acting or playing a role in a film," the boy's father told the Associated Press. "They think it has actually happened."

And it has. It has happened thousands of times, hundreds of thousands of times. But now it's been dragged into the light, pinned down like a butterfly on an entomologist's table, available to dissect, label, name and even post on YouTube.

There are men having homosexual sex in Iran. Ahmadinejad knows that. His questioner knows that. The questioner tried to shame the Iranian president. The Iranian president retreated into blind denial. The real failure of the interrogation at Columbia University was in not being able to find a way to talk about that obvious truth without completely stripping off the quilt.

Once we figure out how to do that, we might even be able to discuss nukes.