What you missed while watching the new "Bionic Woman"

Salon watches the latest (1970s TV edition) Democratic presidential debate so you don't have to: A better, stronger, faster Clinton, a kung fu Kucinich and more. 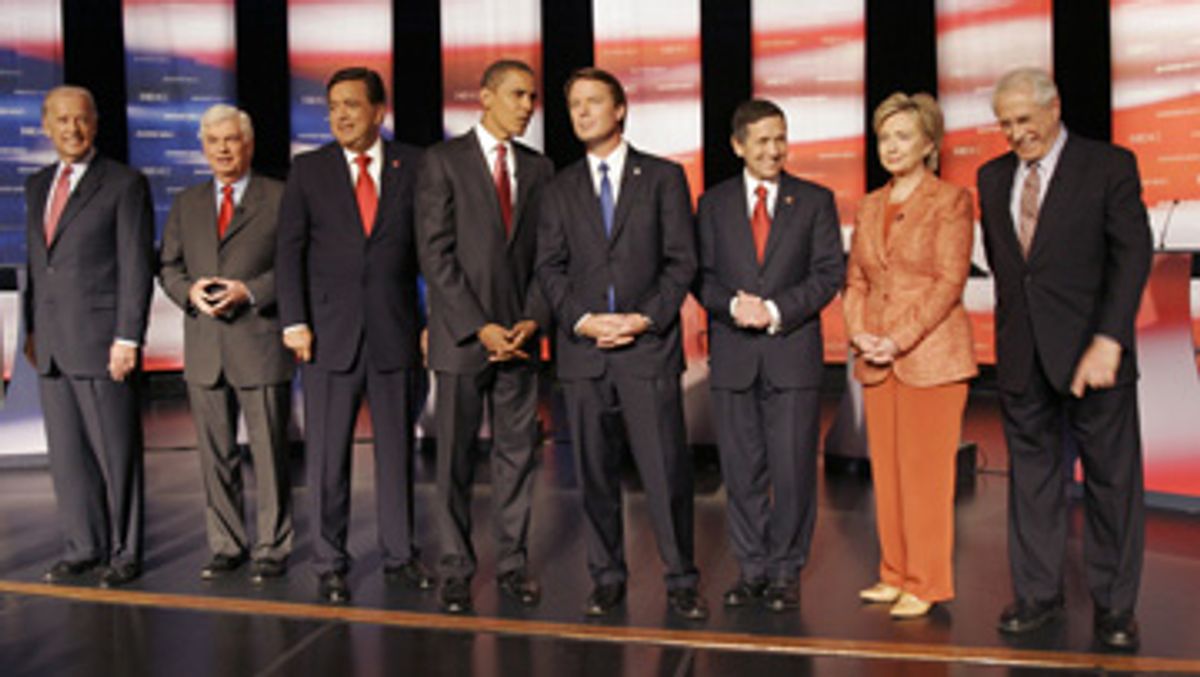 0 minutes. It's fall premiere week at the National Broadcasting Co., and the Bionic Woman is back. New York Sen. Hillary Clinton is dressed in a smart suit the color of a rusting rose, with blond hair so textured it puts Lindsay Wagner to shame. Clinton stands onstage in Hanover, N.H., with seven other Democratic presidential candidates for the latest debate. She is ahead in the polls and comfortable in the knowledge that she is better, stronger, faster.

1 minute. MSNBC's host for this debate is Tim Russert, and he shoots the first question to Illinois Sen. Barack Obama. What will you do if you take office in 2009 and there are still 100,000 troops in Iraq? Can you promise that you would keep no troops in Iraq by 2013?

2 minutes. Obama is vague. He says he would start pulling troops out right away, but he won't commit to a 2013 deadline for total withdrawal. He would meet with the Joint Chiefs of Staff. He would leave enough troops to protect the U.S. Embassy, safeguard civilians and carry out unspecified "counterterrorism activities." He tries to swipe at Clinton, who voted to authorize the use of force in Iraq. "Had my judgment prevailed back in 2002, we wouldn't be in this predicament," he says.

3 minutes. But Obama can't touch her. She survived the 1990s. She is married to the Six Million Dollar Man. They have the technology. They can rebuild themselves. "I agree with Barack," she says. "I think it's very difficult to know what we are going to be inheriting." Having embraced her opponent, she has defeated him.

4 minutes. Former North Carolina Sen. John Edwards is better prepared. He tries a new approach. "I heard Senator Clinton say on Sunday that she wants to continue combat missions in Iraq. To me, that's a continuation of the war. I do not think we should continue combat missions in Iraq," he says. "And when I'm on a stage with the Republican nominee, come the fall of 2008, I'm going to make it clear that I'm for ending the war."

6 minutes. Russert tries to let New Mexico Gov. Bill Richardson speak, but bionic Clinton interrupts. "Tim, could I just clarify," she says. She explains that the "combat missions" would be limited to counterterrorism against al-Qaida. "The vast majority of our combat troops should be out."

7 minutes. But Edwards won't let up. He interrupts her interruption. He is going off script. He is actually taking on the Bionic Woman. "The difference is really very simple," he shoots back. "I would have our combat troops out of Iraq over a period of several months, and I would not continue combat missions in Iraq." What's going on? There is only one answer. Edwards must be Buck Rogers. He kind of looks like Buck Rogers. Could it be the, er, hair?

13 minutes. Dennis Kucinich, in the role of Caine from "Kung Fu," says he can pull the troops out of Iraq in three months, even though all the military generals say it will take more than a year. But time is not a factor for a master of martial arts. "By April of 2007," Kucinich says. "And you can mark that on your calendars." Russert points out that April 2007 happened five months ago. "Make that 2009," Kucinich says. "I'm ready to be president today." As Master Kan teaches, time is a grasshopper. It jumps around.

15 minutes. It's a full moon outside, and former Alaska Sen. Mike Gravel appears agitated. He is upset that Clinton voted Wednesday for a Senate measure to urge Bush to declare Iran's Islamic Revolutionary Guard a terrorist group. Gravel sees this as an invitation for Bush to attack Iran. "I am ashamed of you, Hillary," Gravel says, sounding a bit like an angry Boss Hogg from the "Dukes of Hazzard." "You're not going to get another shot at this because what happens if this war ensues, we invade, and they're looking for an excuse to do it."

17 minutes. Clinton deploys her most potent weapon, the bionic giggle. "Huh huh huh huh, ha ha ha ha," she laughs, appearing warm and likable while at the same time dismissing Gravel as a crazy man. "I don't know where to start," she says. Then she explains that Wednesday's vote will allow the United States to sanction Iranians who are involved in attacks on American troops in Iraq. "My understanding of the Revolutionary Guard in Iran is that it is promoting terrorism," she says, before pivoting to an attack on President Bush. "We wouldn't be where we are today if the Bush administration hadn't outsourced our diplomacy with respect to Iran." Her powers prevail.

20 minutes. Now Russert tries to take on Clinton. He asks her a hypothetical. "If Israel concluded that Iran's nuclear capability threatened Israel's security, would Israel be justified in launching an attack on Iran?" Clinton does not answer hypotheticals. "Tim, I think that's one of those hypotheticals," she says. Russert protests, "It's not a hypothetical, Senator." They go back and forth like this for a while. In the end, Clinton doesn't answer the question, and the other candidates follow her lead. They make bland statements about diplomacy and the importance of Israel.

25 minutes. The hypothetical question gets around to John "Buck Rogers" Edwards, and he seizes the moment. Following Gravel's lead, he suggests that Clinton's vote Wednesday on Iran empowers Bush to invade the country. "I have no intention of giving George Bush the authority to take the first step on a road to war with Iran," says Edwards. "You can't even give him the first step in that authority because he cannot be trusted." Clinton does not get a chance to respond. Edwards is having a good night.

37 minutes. Commercial break. Over on NBC, the new "Bionic Woman" television show is playing. It looks far more entertaining. The lead actress is a brunette who looks much less like Clinton than Wagner did in the 1970s version of the show. Nevertheless, having committed to the bionic Clinton motif, this article will proceed apace.

40 minutes. "And we are back," Russert says. He addresses a question to Connecticut Sen. Chris Dodd, who for the purposes of this article is the father from "Happy Days." Russert asks why Dodd released a statement saying he "can understand" the reason that President Bush would want Clinton to be the nominee. After the question is asked, Clinton deploys her bionic giggle off-camera.

41 minutes. Dodd won't answer the question. This is odd. What is he afraid of? Did the bionic giggle get to him? He makes a bad joke about how someone once mistook him for CNN's Anderson Cooper because they both have white hair. Then he finally says, "I was being somewhat facetious."

52 minutes. Russert asks Gravel how he could be trusted as president if he has declared bankruptcy twice, once for a condo business and once for himself. "I will tell you, Donald Trump has been bankrupt 100 times," Gravel responds. As for his personal bankruptcy, Gravel says he was proud to stick his credit card companies with $90,000 in unpaid dept. "They deserved it," he says.

57 minutes. A question goes to all of the candidates. Would it be appropriate for a schoolteacher to read a story about a gay couple to their children in second grade? "Yes, absolutely," says Edwards. "What I want is I want my children to understand everything about the difficulties that gay and lesbian couples are faced with every day." Obama agrees. So does Clinton.

62 minutes. Another commercial break. Hopefully no children in second grade are watching. This time MSNBC shows an advertisement for Cialis, a pill that promises an erection at any point between 30 minutes and 36 hours after consumption. Sometimes erections may last for four hours or cause temporary loss of vision.

66 minutes. We're back with questions about government entitlements. Delaware Sen. Joe Biden -- an older version of Hawkeye from "M*A*S*H"? -- says he would be willing to raise taxes on those who make more than $97,500 a year to pay for Social Security and Medicare. "I'm probably the only one up here who's going to say that, but the truth of the matter is, you stated it," Biden says. "You're either going to cut benefits, or you're going to go ahead and raise taxes above the first $97,000."

69 minutes. Bionic Clinton is certainly not going to say that. In fact, she won't say much of anything. She says we as a country have to talk about "fiscal responsibility" first. Russert asks if she will at least put a tax increase on the table for consideration. "I'd take everything off the table until we move toward fiscal responsibility," she says. It's not clear what she means. But that's the thing about her bionic powers. She can say vague things that sound sort of meaningful.

70 minutes. Obama at this point represents the "Greatest American Hero," a clumsy, well-meaning figure who is not exactly on his game tonight. He tries to draw a distinction with Clinton. "Everything should be on the table," he says. Upon further reflection, this means pretty much the same thing as putting nothing on the table. But Obama does say raising taxes on the wealthy may be preferable to other solutions, including privatization of Social Security.

101 minutes. Russert asks a hypothetical question, which he said was originally asked by someone else whom he does not specify. Assume the United States captures the No. 3 guy in al-Qaida, who has information about a bomb that is about to go off in an American city. "Don't we have the responsibility to beat it out of him?"

102 minutes. One by one, the candidates say they do not approve of torture. Clinton even breaks her no-hypothetical pledge to answer the question. "It cannot be American policy, period," she says of torture. But Russert has a trick up his sleeve. It turns out that it was Bill Clinton who had originally posed this hypothetical, including the limited exception for beating up prisoners if there was a clear need. "Well, I'll talk to him later," Clinton deadpans. She is good. Bionic good.

116 minutes. The last question of the night is a baseball question. Yankees or Red Sox? Dodd, Richardson, Gravel and Edwards all say the Red Sox, which is the right call in New Hampshire. Clinton and Biden say the Yankees. Obama says the Chicago White Sox. Kucinich says the Cleveland Indians. Russert asks Clinton whom she would root for if the Yankees played the Chicago Cubs, since she was born in Chicago. For the first time all night, her bionic powers are stretched to the breaking point. "Well, I would probably have to alternate sides," she says. Russert gets the final word. "Spoken like a true sports fan," he says.