This unsettling action-thriller suggests that the more America tries to fix things, the more we mess things up. 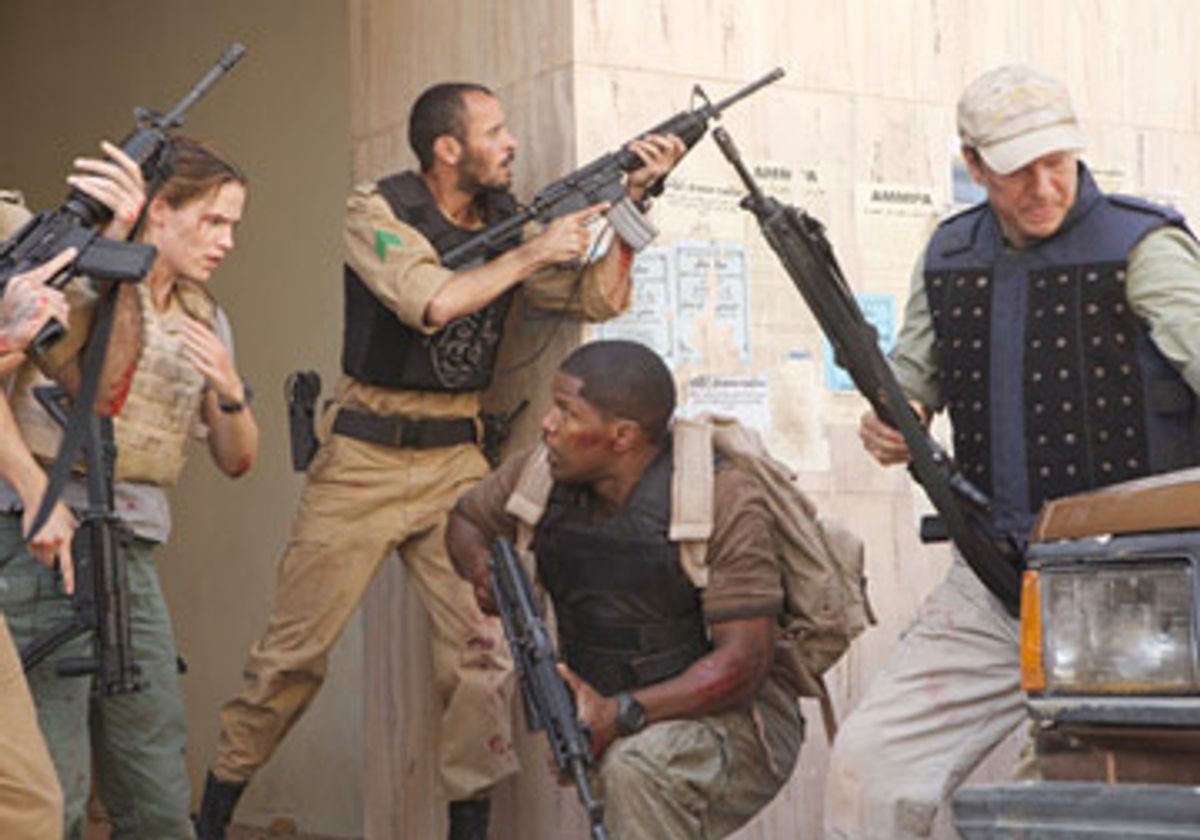 In Peter Berg's "The Kingdom," Jamie Foxx plays Ronald Fleury, a Washington-based FBI agent who agitates to bring a team to Riyadh to investigate a suicide bombing at a softball field in an American compound. The attack killed more than 100 oil-company employees and family members, who were enjoying a company outing, as well as one of Fleury's FBI colleagues. Fleury faces resistance on several fronts, seeing as no one in Washington wants to run the risk of angering our Saudi friends, but he eventually pressures a Saudi official to allow him to lead a small team into the country on a secret mission. He's got explosives expert Sykes (Chris Cooper), forensics examiner Mayes (Jennifer Garner) and -- in the role of the obnoxious, arrogant one whom everyone would like to kill -- intelligence analyst Leavitt (Jason Bateman). These four suit up, fly over and arrogantly bound onto foreign soil, waving their American flags and crowing about how they're going to save the day.

Well, not exactly. "The Kingdom" is distasteful in several obvious and irrefutable ways: For one thing, the idea of setting an action-thriller against terrorist activity that's all too close to real-life events is simply opportunistic and creepy. In preparing the script, screenwriter Matthew Michael Carnahan researched the 1996 Khobar Towers bombing, among other events, and although the movie never pretends to be a foreign-policy brief, its pairing of re-creations of real-life horrors with Hollywood-style blammo action is unsettling by itself.

But the picture is made with a degree of care, and what's surprising about it is the way Berg -- director of "Friday Night Lights" -- actually resists making rah-rah jingoistic proclamations instead of relying on them. I've already seen a few reviews claiming that Fleury and his team drop into Riyadh, bursting with old-fashioned American confidence that they'll be able to track down the terrorists and fix everything. They may be relatively confident about finding the terrorists (although even the fruit of that search proves to be more bitter than sweet); but I think Berg and his actors make it clear that these characters learn fairly early on that they can't fix anything in the Middle East. They realize almost immediately that they're strangers -- unwelcome ones -- even in a country that's supposedly a friend to the United States.

The Saudi police force, which has reluctantly allowed the team to participate in the criminal investigation (an elusive terrorist is the chief suspect), has prepared sleeping quarters for them in a gymnasium. One of the police officers apologizes to Mayes, saying that they'd tried to create separate quarters for her, and to find something "pink," obviously trying to offer what they think is appropriate for a woman. The gesture is amusing to Mayes; later, she's less amused when she attempts to examine a male Muslim corpse and is told she mustn't touch the body. But while she's clearly frustrated that she's hampered in doing her job, she also willingly complies. And later, when one of the Muslim officers reaches out to shake her hand, it's a small gesture that suggests there's been some yielding, some small cross-cultural breakthrough, on both sides.

It's true that there are some tense chase sequences in "The Kingdom," as well as several shootouts and explosions, so maybe Berg is catering a bit too blithely to American audiences' taste for nonstop action. But Berg isn't all that interested in celebrating American supremacy. The actors all give solid, understated performances; they're more grave than they are flashy. The Saudi police officer who's been assigned to keep an eye on Fleury's team, Col. Al Ghazi (played, in a fine, multilayered performance, by Ashraf Barhom, who appeared in the 2005 "Paradise Now"), is deeply mistrustful of them at first, and Fleury resents his lack of cooperation. But the team needs Al Ghazi to help them cut through local red tape, as well as to simply guide them through this unwelcoming corner of the world; Al Ghazi, a man with a wife and family of his own, realizes that Fleury's team has skills that can help catch the culprit. Fleury and Al Ghazi develop a bond that doesn't seem unreasonable or unrealistic for either character.

"The Kingdom" is far too pat about the way people from different worlds can overcome their mistrust; it's perhaps more optimistic than it is realistic. But far from buying into the idea that Americans can stomp into any country and fix everything, "The Kingdom" suggests that the more we try to do, the bigger a mess we tend to make. The picture strikes a suitably mournful note at the end when, their mission ended, Fleury's team is greeted by the director of the FBI (played by Richard Jenkins), who tells them they should be proud of the job they did, that they can hold their heads high. The camera turns to Garner's Mayes, who can't even bring herself to look at him, let alone raise her head. The only thing her character has learned is how little she really knows.