The identity of his biggest multimillion-dollar donor, and how Romney could blow away his GOP competitors on campaign spending. 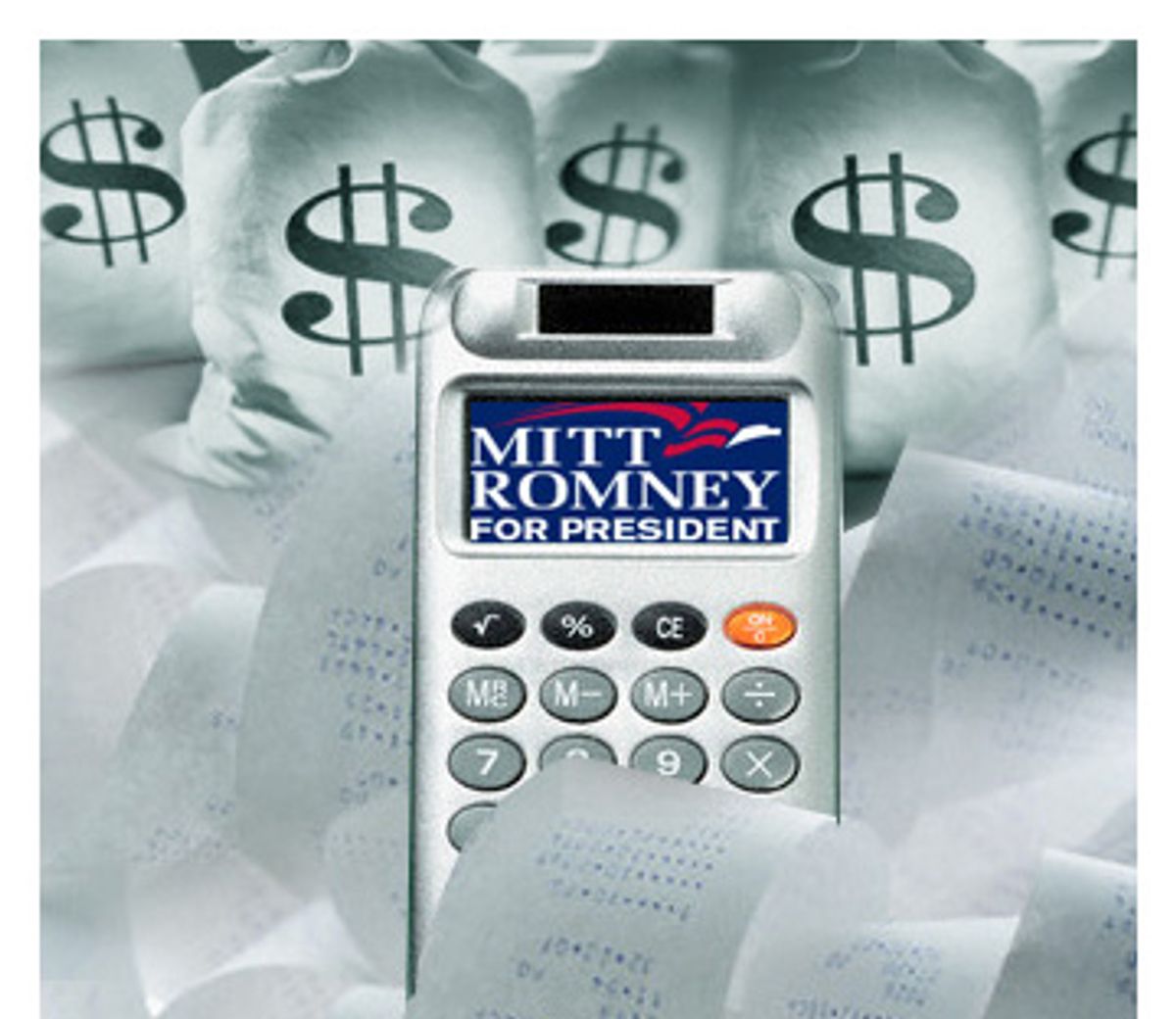 As he travels the country, Massachusetts Gov. Mitt Romney often boasts of his presidential campaign's healthy finances. "I think our numbers have shown that we are able to raise the money," he said at a recent press conference in Michigan. "And that's essential to run a 50-state campaign."

It's a story line the Romney campaign wants to promote. He is the popular front-runner who has been able to energize donors in the party's base, raising more money than any other Republican candidate. Through the first two quarters, he hauled in more than $44 million, about $10 million more than his nearest rival in the money race, former New York Mayor Rudy Giuliani. The money has allowed Romney to spend lavishly on television advertising in early voting states, open the only fully staffed Republican campaign office in Michigan and even hire a full-time organizer in a state as obscure as West Virginia.

But Romney's boasts do not tell the whole story. As much as he likes to talk about his campaign's brimming coffers, he avoids speaking about his campaign's biggest single donor -- a man worth between $190 million and $250 million, who has single-handedly allowed Romney to break away from the pack by giving the campaign one out of every five of its dollars. That donor's name: Mitt Romney.

Through June, Romney has already given himself nearly $9 million in loans to fund his campaign, a number that is sure to grow in the coming weeks when he announces his third-quarter fundraising. Under current campaign finance law, there are no limits to how much a candidate can donate to his own campaign, giving Romney a huge advantage over other candidates who are forced to collect donations with a maximum value of $2,300 per donor. If Romney so chooses, he will be able to blow his rivals out of the water in January campaign spending.

"When you have a situation where there is a candidate with a fortune to draw down, that candidate has a very big and unfair advantage," says Fred Wertheimer, of Democracy 21, a leading proponent of campaign finance reform.

Throughout modern history, self-financed presidential campaigns have been rare. Since 1976, only one candidate, Ross Perot, sank substantial funds into his own campaign in the general election. Self-financing was discouraged by the presidential public financing system created in the wake of the Watergate scandal that brought down Richard Nixon. Under the program, candidates could receive as much as $25 million in federal tax dollars if they agreed to limit their spending, and forgo any significant gifts to their own campaigns.

But as the costs of campaigns have increased, the public financing system has become a relic. Last week, John Edwards' announcement that he would be accepting public matching funds was widely seen as an admission of weakness. Though he will receive millions of dollars come January, he will have to limit his spending in early states like Iowa and New Hampshire. Sen. John McCain, R-Ariz., who has also been cash-strapped, is considering accepting public matching funds.

For Romney, meanwhile, money is no object, as long as he is willing to deplete his personal fortune. According to financial disclosures filed in August, Romney keeps between $5 million and $25 million in cash on deposit at the Bank of America. Tens of millions more are available in mutual funds that could easily be sold and transferred to the campaign.

His less-wealthy rivals are unable to respond in kind. If Romney were self-financing a campaign for Congress, the current campaign finance law provides an exemption that would up the limits his rivals could raise from any single donor to even the playing field. But currently there are no exemptions in a presidential contest. No matter how much Romney invests, his rivals will still be limited to raising only $2,300 from each donor in the primary and the general election.

The impacts of this advantage are evident both on paper and on the campaign trail. Take away Romney's own investment in his campaign, and his fundraising through June is on par with that of Giuliani, with the two about $10 million ahead of McCain. Put another way, if you subtract the money Romney has given himself, then Romney had just as much cash on hand in June as McCain did, a little more than $3 million. At the time, this was seen as a disastrous state of affairs for McCain, prompting the departure of his top advisors.

Last week at a campaign stop in Long Beach, Calif., Romney attempted to turn his own investment in his campaign into a selling point. "I'm not beholden to any particular group for getting me into this race or for getting me elected," he told followers at a campaign rally, according to the Associated Press. "I don't like the fact that money has such an impact on politics."

But Romney's money has helped drive the most massive and well-organized campaign on the Republican side. For months, Romney has been running periodic television advertisements in Iowa, New Hampshire and South Carolina. He far outspent all the other candidates at the Iowa Straw Poll in August, and he has maintained a blistering campaign pace, sometimes visiting four states in a single day, often traveling by chartered jet. He is also well positioned to spend huge amounts of money in Michigan and Florida -- large, expensive states that both have January primaries.

In the meantime, other Republicans have been working on bare-bones budgets. In late September, Arkansas Gov. Mike Huckabee had to back out of a key meeting of Michigan Republicans because, according to his campaign, he could not afford the charter airfare. McCain, meanwhile, has lost senior staff and consultants as a result of disappointing fundraising. Former Tennessee Sen. Fred Thompson appears to be at a marked disadvantage given his September entry into the race, having raised just a few million dollars.

Romney may be the sole member of the pack with a sunny outlook on the financial side of the race. A couple of hours after Romney's Michigan press conference on Sept. 22, McCain held his own press conference. A reporter asked if he was looking forward to the end of September, when his campaign would be reporting its latest fundraising haul. McCain replied with a smile: "Not at all."