Falsely accused of being a terrorist, the Oregon lawyer wanted something more from the government than a cash settlement. He's fighting the Patriot Act -- and so far, he's winning. 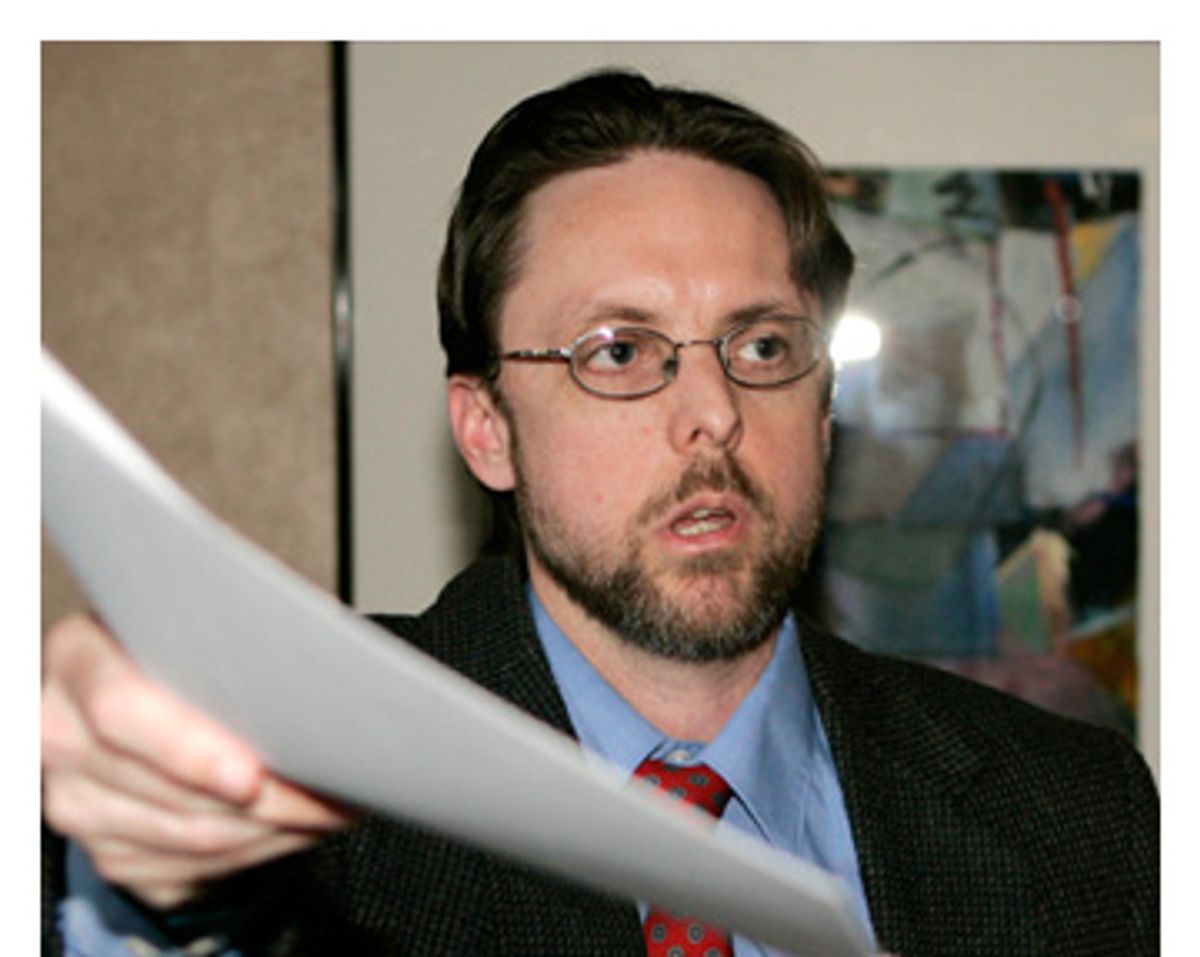 "Someone must have slandered Joseph K," begins Franz Kafka's classic novel "The Trial," "for one morning, without having done anything truly wrong, he was arrested."

Last week America's own Joseph K., the terrorist who was not a terrorist, got a little more revenge on the government that had persecuted him. Brandon Mayfield, falsely accused of involvement in the Madrid train bombings of 2004, has already collected a hefty cash settlement; on Sept. 26, a federal judge in Portland, Ore., ruled that the two Patriot Act provisions the government had used against him violate the Constitution. Though the ruling will be strongly challenged on appeal, its larger importance may be as another straw in a judicial wind blowing against the Bush administration's contemptuous treatment of the Constitution and the courts.

These days, Mayfield lives much as he has for the past decade or so, practicing family law from a small solo office next to a strip mall on the southern edge of Portland. He is a slight man, 41 years old, who likes to take his lunch at a nearby Middle Eastern restaurant. In many ways, what's most interesting about Mayfield is how utterly unexceptional he is. He was born in Kansas and got his law degree from Washburn University in Topeka. An Army veteran, he is married, with three children, and lives with his family in a nearby suburb with the homey name of Aloha.

Almost the only vaguely exotic thing about Brandon Mayfield is his religion: He is a Muslim convert and belongs to a local mosque. But like Alexis de Tocqueville, the 19th-century French writer whom he likes to quote and who helped define the American spirit, Mayfield worries that in a democratic system, the tendency of government will be to augment its power at the expense of minorities. “I’m suspicious of government anyway,” he said in an interview last week. And it's not hard to conclude that Mayfield's one deviation from the norm, the thing that makes him a minority, explains why, for a few weeks in 2004, he was one of the most famous people in the world.

On May 6, 2004, FBI agents descended on his law office, his home, and the family farm in Kansas to search for evidence that Mayfield was a terror mastermind. Media leaks let it be known that he was responsible for the Madrid train bombings of March 2004, which killed 191 people. The evidence was said to be a fingerprint found on a plastic bag of detonators at the scene. Federal agents threw Mayfield into the Portland city lockup not as a defendant but as a "material witness."

But not only had Mayfield been far from Madrid at the time of the bombing, he hadn't even left the United States since 1994. The FBI, however, insisted that his Army fingerprint matched a digital photo of the print from the Madrid bag. The Spanish police, who had the original fingerprint, were never convinced that Mayfield's was a match. But that didn't stop the FBI from swearing to a judge that it was.

The case collapsed when, after Mayfield had been held for two weeks, the Spanish police identified an Algerian, Ouhnane Daoud, as the real holder of the fingerprint. The feds released Mayfield.

Then the payback began. Gerry Spence, the Jeremiah Johnson of America law, ambled down from the Wyoming mountains to represent Mayfield in a civil-rights lawsuit against the government. The FBI apologized and gave him a $2 million settlement. Mayfield agreed to waive all his personal claims against the government and specific agents; but he insisted on retaining one claim: that two provisions of the Patriot Act were unconstitutional on their face.

In the weeks before his arrest, Mayfield's wife, Mona, repeatedly came home to find the deadbolt locked on their house, even though no one in their family ever used it. Sometimes she would feel an eerie sense that someone was in the house. She would walk through their home calling the family cat, Mayfield recalls, "not because she wanted the cat to come, but because she wanted to let any intruders know she was coming." In general, the entire family began to suspect that someone was going in and out when they were not at home. Mayfield, who had heard of federal investigations among the Muslims of Portland, suspected it was law enforcement. "If it was a burglar," he recalls thinking, "why didn't they take anything?"

And in fact, FBI agents, using a warrant issued under the Foreign Intelligence Surveillance Act, had begun to enter Mayfield's home and office surreptitiously, photographing papers, downloading hard drives, and planting listening devices. This kind of warrant is known as a "sneak and peek," and does not require any notice to the target of the surveillance.

When FISA was passed in 1978, the government could obtain "sneak and peek" warrants only when it certified to the secret FISA court that eavesdropping on foreign agents was "the purpose" of the surveillance. The Justice Department was careful to segregate this type of intelligence information from ordinary law-enforcement proceeds, which were gathered under the Fourth Amendment's protections against "unreasonable" search and seizure. Under the Fourth Amendment, a law-enforcement warrant must be supported by "probable cause" -- in essence, good reason to believe that the target has committed a crime.

The Patriot Act did away with this separation. Now foreign intelligence need only be "a significant purpose" of the surveillance -- and the feds are free to share the information thus gathered with any part of law enforcement. This new tool gives the government a much broader power to investigate citizens without meaningful court review and use against them the evidence it acquires.

Those two provisions -- the authorizations for secret searches and secret wiretaps against Americans -- formed the subject of Mayfield's remaining claim. And on Sept. 26, District Judge Ann Aiken held that both provisions violated the Fourth Amendment. In place of its specific guarantees, she wrote, "the people are expected to defer to the Executive Branch and its representation that it will authorize such surveillance only when appropriate." She added that the government "is asking this court to, in essence, amend the Bill of Rights, by giving it an interpretation that would deprive it of any real meaning. This court declines to do so."

In order to reach the Fourth Amendment issue, Aiken had to find that Mayfield and his family had what lawyers call "standing" to sue the government. In essence, that means that, despite the settlement, some live "case or controversy" still exists. Mayfield argues that the dispute continues because the government has the information it seized from his home and office, and there's no guarantee that it won't use that information against him or, as it apparently did during his 15 minutes of fame, selectively leak it to the media. And beyond that, Mayfield says, there were confidential legal files in the office. "What if I have clients who were subject to a FISA search?" he asks.

The judge found "standing" by reasoning that a decision in Mayfield's favor would at least put the government on notice that it should not misuse the information.

Not long after the Patriot Act changed the "purpose" requirement, the FISC issued an order requiring the government to continue to segregate the information to prevent misuse by law enforcement, holding that those measures were needed to protect citizens against a violation of the Fourth Amendment. The FISCR reversed that decision, holding that "the procedures and government showings required under FISA, if they do not meet the minimum Fourth Amendment warrant standards, certainly come close" and that the amended act "is constitutional because the surveillances it authorizes are reasonable."

But that was then, and this is now. Just as the tide of public opinion has turned against the Bush administration, so does the tide of judicial approval seem to be running against it. While Mayfield's motion was pending, another federal court, in New York, held that the Patriot Act's provision allowing investigators to obtain phone and other business records using "national security letters" is also unconstitutional. Even the Supreme Court of Chief Justice John Roberts has recently shown heightened concern about administration's conduct of the war on terror. Last April, the court denied review of the law stripping courts of jurisdiction over Guantánamo detainee challenges. But two months later, in an all-but-unprecedented move, the court reversed itself and granted review -- apparently because of an affidavit from a military lawyer stating that the detainees are receiving only a travesty of due process.

By repeatedly lying to the nation and to the courts, by extending government secrecy to new heights, and by pushing its constitutional and statutory authority to the furthest imaginable limits, the Bush administration has forfeited the trust of the courts. Judges of all political stripes simply no longer believe government assurances. Trust us, the government said, Mayfield's the guy; he wasn't. Trust us, we won't abuse national security letters; they did. Trust us, we don't torture; they do.

Harvard professor Jack Goldsmith, a conservative and a Bush appointee, is the man who withdrew the infamous "torture memos" that apparently authorized cruel and inhuman interrogation by soldiers and spies. In his recent book, "The Terror Presidency," Goldsmith writes that Bush, unlike other strong wartime presidents, has repeatedly refused to consult with Congress, defer to the courts, or make any concession even to public opinion. "He has instead relied on the hard power of prerogative," Goldsmith writes. "And he has seen his hard power diminished in many ways because he has failed to take the softer aspects of power seriously."

This diminution suits Brandon Mayfield fine. Behind his desk are two framed posters, made at a local copy shop, of the Bill of Rights. Black-clad federal agents worked directly beneath them, he notes, as they ransacked his computers and his clients' confidential files in a fool's quest for a Spanish bomber.

Mayfield is now working on his own account of the events of 2004, and he spends other free time reading the history of the Constitution and the Bill of Rights. The Constitution guarantees every American the right to choose a religious belief, even if it's one the government does not approve of. And it's impossible not to believe that Mayfield's spiritual choice is what landed him in prison, branded a mass murderer, on the basis of phony assertions and faked "evidence."

Mayfield's prescription for what ails the country is as straightforward as most other things about him. It's the Constitution.

"We have a perfect balance between liberty and security, between criminal investigation and privacy. It's called probable cause," he said. "We ironed out these issues a long time ago. That's why we're such a wonderful country."