Endorsing GOP front-runner Giuliani would be anathema to Dobson's evangelical base, but his "third-party" alternative could be a boon for Democrats. 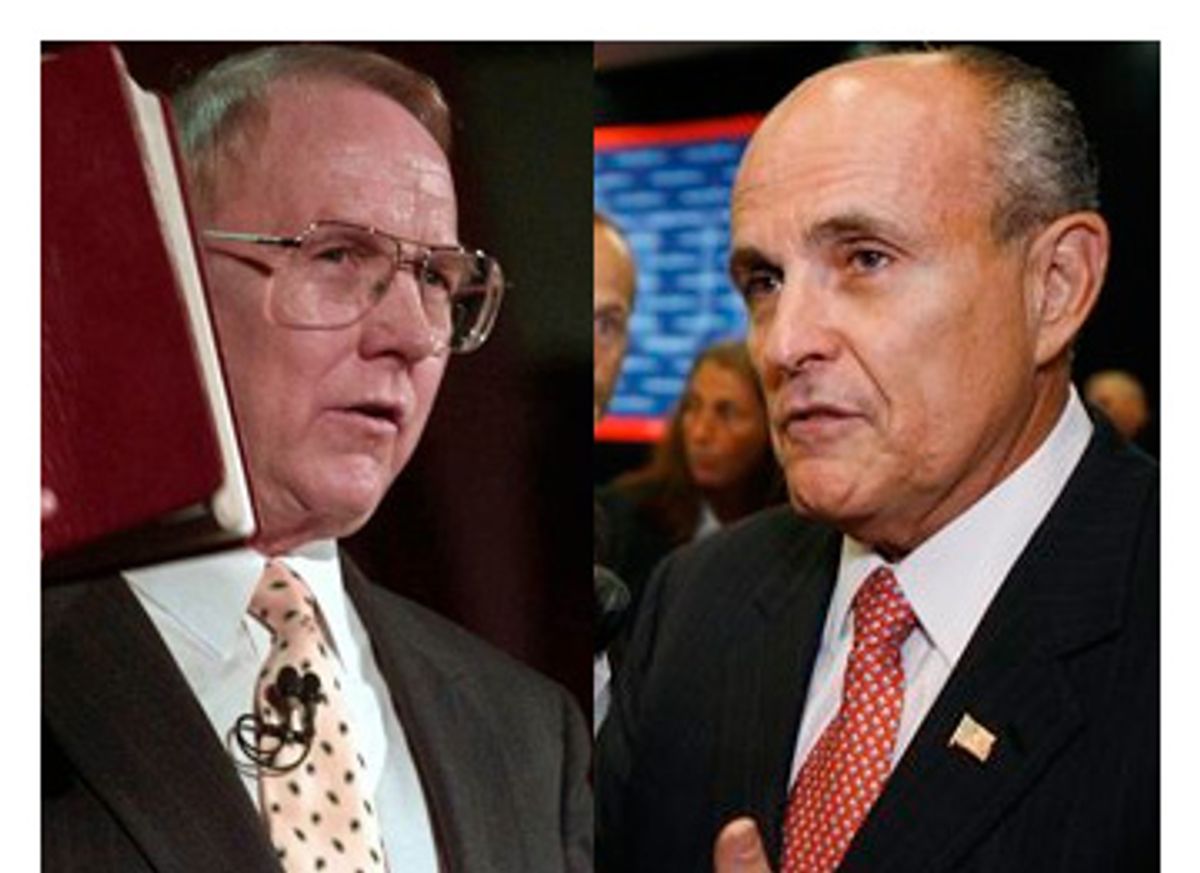 When James Dobson warns that he will lead evangelical conservatives and other "values voters" in a third-party revolt if the Republican Party nominates Rudolph Giuliani for president -- as the Focus on the Family president warned in Thursday's New York Times -- it is hard to suppress a cynical smirk. Such rumblings from the religious right seem ritualistic, issued predictably in election years or whenever Republican politicians show signs of straying from the fold. Many analysts listen, shrug and then predict that the party leadership will somehow accommodate the restive theocrats long before Election Day -- and that the imperatives of power will prevail, as usual, over principle.

But this time could be different for the increasingly disgruntled Dobson and his theocratic cohort. This time they may feel they have no choice but to follow through on their threat to support a "minor party" candidate. Consider their dilemma.

Having founded both a mass movement and a lucrative business on the promotion of "pro-family" values, the Dobson faction now confronts a potential moral disaster in the person of Giuliani, who represents the antithesis of everything they profess to hold most sacred. For years and decades, they have exhorted their listeners and contributors to despise every politician who supports reproductive rights, tolerates homosexuality and indulges in extramarital sex (or even divorce, which they consider equally sinful). So how could Dobson -- or any self-respecting conservative Christian -- ever condone a vote for the former mayor of New York, whose personal and ideological record is so profoundly at odds with what they have described as their bedrock beliefs?

To this day, Giuliani proclaims his pro-choice views on abortion, which horrifies the religious right despite his promise to appoint antichoice judges to the Supreme Court. His flashy wife, Judith, is No. 3, whom he acquired in a spectacularly public adultery that culminated in an ugly split from his second wife and accusations of multiple infidelities -- a family debacle that continues to damage his relationship with his children. After his outraged second wife demanded that he leave their home at Gracie Mansion, he sought refuge in the lavish Manhattan apartment of a wealthy gay couple, who sheltered him for several weeks.

In short, by any objective standard, he makes the Clintons look dull and even righteous.

Moreover, Giuliani deviates from right-wing dogma not just on a single issue but on almost every social issue, including immigration and gun control. And to most of the evangelical right, abortion is not just a single issue but the paramount moral question of our era, followed by the worrisome specter of gay marriage. For Dobson to endorse Giuliani would seriously undermine the legitimacy of evangelical politics and of Christian fundamentalism as an ideology.

No doubt Dobson and his fellow true believers would rather not bolt; instead they hope that the Republicans will heed them and abandon Giuliani -- based on the same "electability" argument that some Democrats have used against Hillary Clinton. The latest Rasmussen poll provides statistical support for that ploy, showing that up to 27 percent of Republican voters would prefer a third-party candidate of the Christian right to either Giuliani or Clinton. In a three-way race pitting the two front-runners against an unnamed "family values" candidate, Clinton wins with 46 percent and Giuliani is left with only 30 percent. So the Dobson faction may well be able to ruin the Republicans next year and bid to rule them in future elections. At the moment, however, it has no plausible candidate and no alternative strategy.

The pronunciation of anathema on Giuliani and the threat to split from the Republicans is the culmination of a long, fruitless process for Dobson. For many months, Dobson allies such as Tony Perkins, the president of the Family Research Council, have warned that Giuliani is "far from the mainstream" and unacceptable to them, but their search for a competitive candidate has failed -- while Giuliani has continued to dominate in both national polls and fundraising. The presidential contest began without an attractive candidate for the religious right, and so far none has appeared.

Indeed, the catalog of disappointment has only continued to grow. The religious right's historical disdain for Sen. John McCain is well known, and his strenuous pandering to the extremists he once denounced has not improved their opinion of him. Former Massachusetts Gov. Mitt Romney is seen as unreliable and untrustworthy even to those willing to overlook his apostate Mormon faith. Sen. Sam Brownback, the Kansas Republican, is ideologically acceptable but has turned out to be a bit weird and an inadequate campaigner. Former Tennessee Sen. Fred Thompson, once touted by some evangelicals as the second coming of Ronald Reagan, is so limp and lackluster that he has been reduced to pleading for applause from bored voters -- which probably doesn't surprise Dobson, who never liked him either.

Frustrated by this panoply of scrubs, Dobson encouraged Newt Gingrich to run, but the former House speaker was unable to raise enough money or enthusiasm to enter the race. Former Arkansas Gov. Mike Huckabee, a Baptist minister who is well-liked by evangelicals and enjoyed a moment of publicity after a decent showing in the Iowa Republican straw poll, has managed to raise only a million dollars in the third quarter -- compared with more than $11 million raised by front-runner Giuliani.

Whether Dobson is serious about a third party or not may become clearer at his upcoming "Values Voters Summit," a mini-convention of religious-right activists that will convene in Washington on Oct. 20, with appearances by nearly every Republican presidential hopeful (except Giuliani and Thompson). The Republican Party won't be "finished" by the defection of the religious rightists -- as a few feverish partisans predict -- but they have the capacity to make what portends to be a bad year even worse.