I thought cool sneakers and video games were only for dedicated fanboys -- until the new old-school Nikes made me lust after cool kicks again. 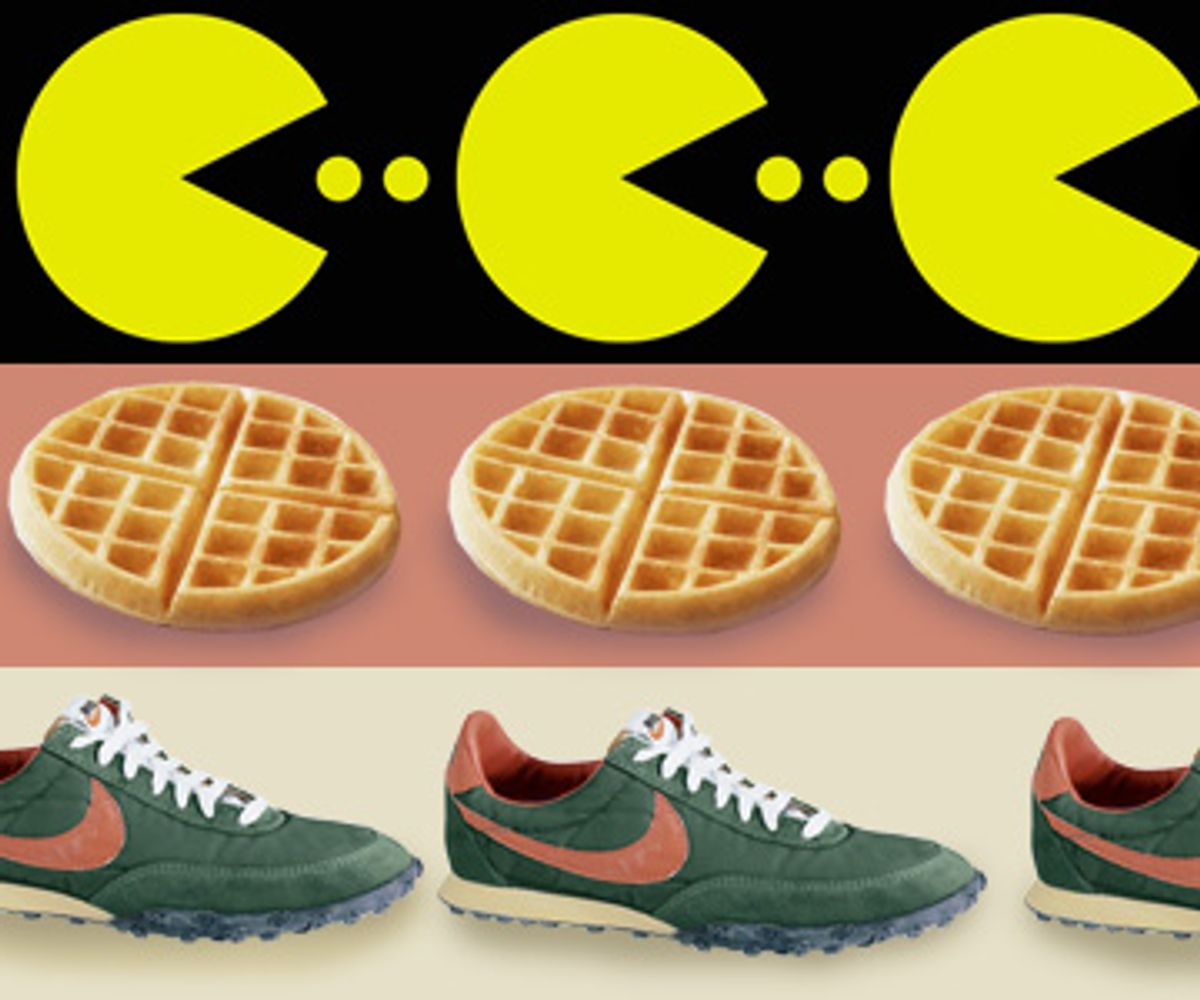 I stopped getting excited about sneakers the same time I stopped being passionate about home video games: 1985. Air Jordans were so expensive, and I couldn't understand how their aggressive leather clash of red, white and black was supposed to be beautiful. Meanwhile, Nintendo's "Super Mario Bros." required too much study -- I didn't have the patience to spend hours rutting out secret mushrooms and memorizing other tricks. And the NES controller had an A and a B button. Confusing! I wanted to play vids, not pilot jets. Give me one joystick, one button, and line up them "Space Invaders."

Shoes only got flashier in the ensuing years, and games acquired even more buttons and secrets, until the latest videos and sneakers belonged exclusively to the fanboys -- young men (and some women) with the leisure and will to dedicate their lives and cash to these mildly esoteric hobbies. There has been, this century, a boomlet of quasi-underground sneaker boutiques like Alife, Recon/Nort, and Dave's Quality Meat. The stores are officially as open to the public as Wal-Mart, but, like Prada, they are built to draw in the right crowd and scare off outsiders. If you can find the place and summon the courage to ring the bell, that is. Web sites for sneaker churches like Boston's Bodega are beyond cryptic, baffling to the uninitiated. It's for guys like Turtle.

Turtle, the teddy-bearish, pot-smoking, sneaker-crazed vid-kid on HBO's "Entourage," is the most visible representation of the sneaker fanboy. In one episode, Turtle waits in a long line for rare sneakers but comes up empty, so Vince buys him a custom pair for 20 grand. (Waiting in line for a hot new shoe is a key sneakerhead rite of passage.) The hip-hoppiest corners of the culture seem to serve the world's Turtles, who have set a grueling pace. To me, playing "Madden" on a Sony Playstation is as intimidating as a pickup game of actual football. Same with shoes -- Kermit-Adidas synergy? Freddy Kruger-themed Reeboks? I would need to study sneaker culture for years to have the confidence to merely try on anything more advanced than establishment standards like New Balance 574s, Converse Chuck Taylors, or Saucony Jazz. (OK, to be honest, I also own Golas, Pumas, Asics Tigers and Kangaroos. But I hold that these were all utilitarian impulse buys. And they were all on sale.)

But last winter, finally and famously, Nintendo seduced laypeople back to home video games with the physical, player-friendly Wii. With Wii's "Tennis" as "Pong" redux, it was like the new old days. I could play again. This wouldn't be a big deal if video games were mere toys, but vids are touted as the next level in human expression: novels, movies, music, visual arts and sport combined. So it feels important to be back on top of the cultural current. We can all get back on -- those of us who were left in the dirt while games evolved too fast, when it seemed like you had to choose between being married and employed or being good at video games. We no longer have to make that choice.

Then I saw displays for new vintage-style Nike running shoes. Finally, here were hot new sneakers I could understand. The line consists of meticulous reproductions of early and mid-1970s Nike runners. The groovy, mustache-heavy campaign promises to turn the wearer into a combination of "Anchorman" "yogger" Ron Burgundy and iconoclast track hero Steve Prefontaine, with maybe a dash of "Dazed and Confused's" Wooderson thrown in. It is a perfectly evocative stew of the sexy-kitsch '70s. But the shoes and campaign also reference a more sincere '70s -- a time of genuine and blessed American potential and innovation in running, when it seemed like Americans might become the best distance runners in the world.

The Waffle sole has become, with an assist from Nike marketing, the symbol for track coach and Nike co-founder Bill Bowerman -- guruically played by Donald Sutherland in the forgettably titled but entertaining Prefontaine biopic "Without Limits." There's a sacred aura to the Waffle sole. The vision of Bowerman pouring shoe rubber in his wife's waffle iron is becoming as important to the mythos of American invention as Ben Franklin flying a kite or Alexander Bell calling into the telephone for Watson. And Steve Prefontaine, killed in a car crash at 24, still hovers over high school track programs as a spiritual mentor. He is the only distance runner most Americans know. (People can name Carl Lewis, yes, but sprinters never seem to spark the same dreaminess. You need at least a mile for that.)

Sneakerheads are into these vintage-style shoes for their aesthetics, if not their implied history. New York sneaker church Alife has been selling the Nikes out, though they carry only a few pairs in hard-to-find European-release colors. Kids come into New York's Niketown looking for recent Dunks or Air Force 1's (AF1s) -- two stalwart Nike basketball shoes that are the base shoes for many sneaker freaks. (The Dunks are now SB, for skateboard, but aren't worn by skateboarders.) Dunk SBs and AF1s are sturdy and thick-soled; their appeal is they serve as canvases for an infinite number of iterations (more than 1,700 for the AF1s, and counting). But some youngsters wander by the shag carpet display on the fifth floor, see the Cortezes and Oregon Waffles, and get sucked in by the snug fits and snazzy retro colorways. ("Colorway" refers to which colors are combined, and how. It is one of the most important sneaker vocabulary words. How a shoe compliments the rest of an outfit is nearly as important as the shoe itself.)

The vintage Nike running shoes, so tailored and weightless, come off as anti-Dunks. Admittedly, most male teenagers are as shocked by them as they would be by short, tight shorts. But they get a pair of runners to counterbalance the basketball shoes, and to supplement their primary collection. (Sneakerheads traffic in numbers, and need at least 20 pairs; Simon Wood, the founder of Sneaker Freaker magazine, has more than 70 pairs of AF1s alone.) Nate, an 18-year-old clerk at Niketown who usually favors the Dunk SBs, was so into the new Daybreaks that he paid the $80 list price rather than wait the two weeks it takes for the 40 percent employee discount to kick in on new releases. So a number of cutting-edge fanboys understand, just as many Xbox aficionados respect the old-school challenges of "Ms. Pac Man."

Conventional marketing wisdom has it that nichification is the ascendant business model. It's the "long tail": instead of a few key products being bought by millions, there will be millions of specialty items (i.e., super-exclusive shoes) that are each sold to a few targets. Print-on-demand books and custom T-shirts represent the culmination of this mode. However, the Wii, these Nikes and a number of other products inhabit a third consumer path between the blockbuster and specialty item: the Big Niche. The Big Niche is filled with refined, ostensibly specialty products that a lot of people want. We'll go with the restaurant that has the longest line, the book that's already a bestseller -- but we also want to fancy ourselves experts, insiders. Big Niche products do this. The retro Nikes appeal to both discerning fanboys and the long lapsed. (Turtle and me could play each other on the Wii.) "The Simpsons Movie" pleased Simpsons nuts as well as those poor blinkered souls who have never seen the show. And Whole Foods, with nearly 200 stores in America, and dozens more on the way, allows us to be environmentally sensitive foodies with ingenious palates. It's a paradox that seems to be working: elitism for the people.

The new-old Nikes aren't perfect. They're aged "to look 30 years old," which means the foam soles are yellowed, and the laces are splotched to seem like they've been rained on. It feels like overkill. And even though the "Nike bad" movement has quieted, I still almost feel like I have to apologize for liking them, knowing they were probably manufactured in substandard conditions, like every other one of the countless made-in-Asia products we buy. For me, the initial pull of the shoes was simple (simplistic?) nostalgia. I can't help it -- they reminded me of the cool older kids on my block in late-'70s Wisconsin. I know it's silly, but buying these Nikes made me feel renewed. (Imagine if an ad campaign got you back into your long-abandoned house of worship. And you believed.) When my brother and I were boys Mom would take us to Kinney Shoes, in the corner of a beloved shopping center. The defunct shoe chain and the strip it was nestled in are part of that lost America -- the same one that can be glimpsed in Stephen Shore's "Uncommon Places" photos. There was a phone booth outside -- another chunk of that lost America. (Dang! Where is it? I swear it was right here!) We'd wear our new sneaks straight out of the store. Then we'd duck into the phone booth and burst out, yelling, "Super-shoes!"

Now it's what I say to myself while I'm walking down the sidewalk wearing my new-old Nikes: I'm on my way to a Wii party, and I am confident I'll have the sweetest kicks there.

Andy Selsberg is a freelance writer in Brooklyn.