How Saturday's poll could determine the fate of Musharraf, Bhutto -- and bin Laden. 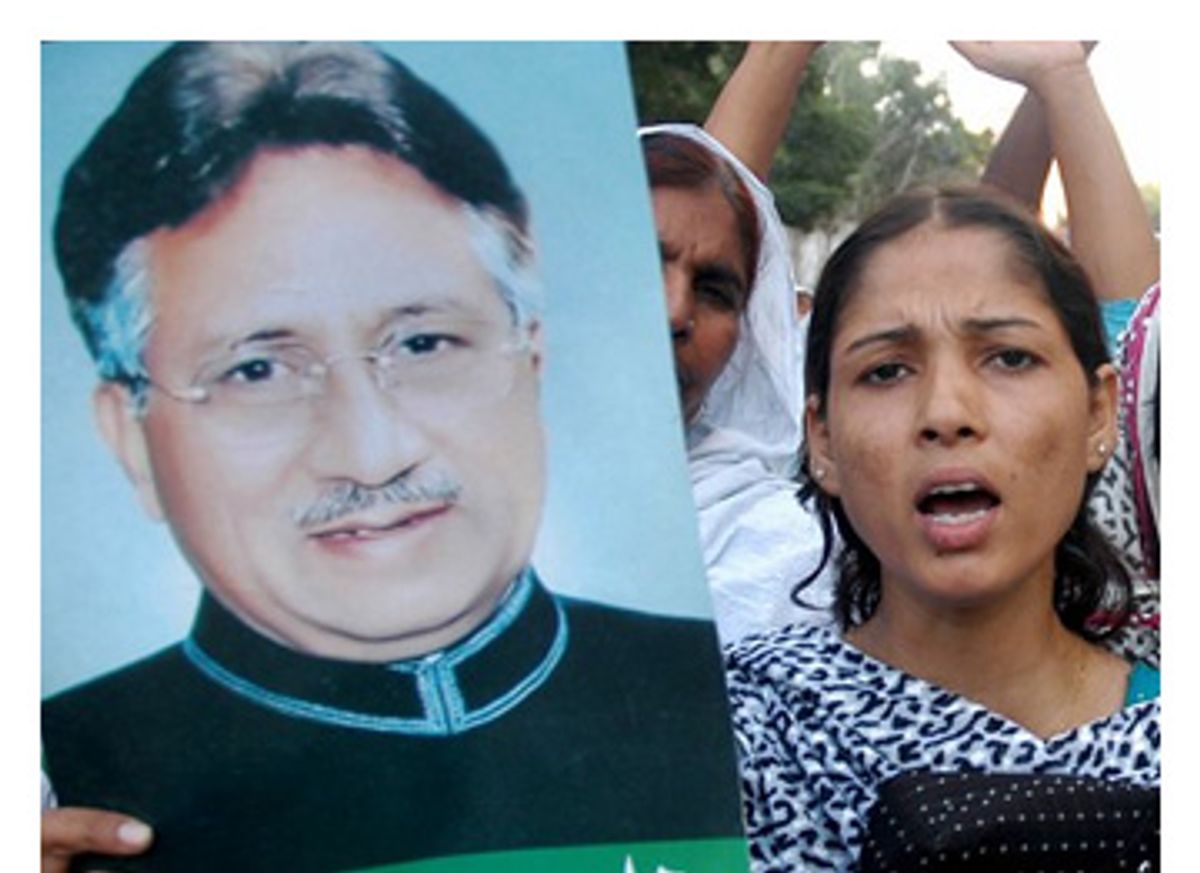 There is nothing normal about the presidential election taking place Oct. 6 in Pakistan. Legal challenges, street protests, political deals and international maneuvers have preceded the vote and will most likely continue as Gen. Pervez Musharraf tries desperately to legitimize his power. Pakistan's status as a critical country in the war against terrorism, and the presumed base of a resurgent al-Qaida makes Pakistan's domestic developments important beyond its borders.

Under the Pakistani constitution, the president is a figurehead elected by the country's Parliament and four provincial legislatures. Musharraf, on the other hand, is anything but a figurehead. After taking power in a military coup in 1999, and especially since he became an important U.S. ally in the war against terror following 9/11, Musharraf has wielded absolute power. He has never been constitutionally elected, so the references in much of the media to his "reelection" are inaccurate. Musharraf declared himself president for five years based on a rigged one-sided referendum in 2002. That "term" ends soon, which is why Musharraf needs to get elected now.

Musharraf's election bid has been the subject of legal disputes from the first day. He is concurrently president and army chief, and he is seeking election from lame-duck legislators whose term ends in December. The opposition argues that as a serving army chief, Musharraf cannot run for elective office. Even if he were to retire from the army, he would have to wait for two years before he could run in an election, according to Pakistan's constitution.

Moreover, the idea of legislators who are at the end of their term electing a president for the next five years also appears odd to many. It is as if the majority party of an outgoing U.S. House elected the Speaker for the next term to preempt the possibility that the incumbent majority would lose power in a general election.

A few days ago Pakistan's Supreme Court made it possible, on a technicality, for Musharraf to run for president without giving up his position as army chief. But now the court is in the process of hearing arguments against Musharraf's candidacy. In something of a cart-before-the-horse move, the court has refused to stay the election but has ordered that the announcement of results be withheld until a final verdict is reached over whether Musharraf can run.

Musharraf's supporters hold the majority of seats in the current legislatures as a result of general elections five years ago that were described even by the U.S. State Department as "flawed." There is little doubt that he will win their votes. At some point, he will be declared elected unless the Supreme Court rules against him. Musharraf has bought insurance against the latter possibility by reaching an agreement with the leader of Pakistan's largest opposition party, former Prime Minister Benazir Bhutto.

In return for Musharraf's dropping graft charges that have never been proven, members of Bhutto's Pakistan's Peoples Party (PPP) will not join the rest of Musharraf's opposition in resigning from the federal and provincial legislatures. The PPP could also join Musharraf supporters in amending the constitution to enable him to secure election in case of an adverse judgment against him from the Supreme Court.

The arrangement with Bhutto will, however, depend on how far Musharraf will go to assure Bhutto of a free and fair election. Until now, Musharraf and Pakistan's military have seen the PPP and other democratic parties as their enemy. Pakistan's generals believe that only they can keep the ethnically diverse country together and have yet to recognize the aspirations of the Pakistani people for full democracy.

All of this might enable Musharraf to remain president notwithstanding his declining popularity. "Legal" is not the same as "legitimate." Musharraf will most likely continue to face legitimacy questions even after he has declared himself duly elected and received messages of congratulations from world leaders, foremost among them President Bush.

Bhutto, too, has to balance her willingness to negotiate with Musharraf with the intelligentsia's perception that Musharraf is an unreformed dictator who needs to be overthrown. She is popular as a social democratic politician who has challenged military rule and suffered for it.

The corruption allegations against Bhutto have not diminished her support, especially among Pakistan's poor in certain regions. But Bhutto will have to guard against being dragged down by association with Musharraf. Despite U.S. support for an arrangement between the two, Bhutto could find maintaining a hard line toward Musharraf tempting because of the benefits it brings in more votes for her.

An opinion poll conducted in Pakistan by the International Republican Institute in July indicated that 62 percent of Pakistanis want Musharraf to resign as army chief, that 59 percent believe a free and fair poll is not possible while he is in power, and that more people support the prospect of a transition negotiated between Bhutto and Musharraf than are opposed to it.

But another survey in August, from polling organization Terror Free Tomorrow, revealed an even more volatile current across Pakistan's political landscape -- that Osama bin Laden now had a higher approval rating, at 46 percent, than Musharraf, at 38 percent. (President Bush stood at 9 percent.)

Indeed, Musharraf's shaky capability to provide a bulwark against terrorism has been exposed as parts of Pakistan have slipped deeper under the influence of Islamist extremists. With U.S. intelligence reiterating that al-Qaida enjoys a safe haven in remote regions of Pakistan, Musharraf's claims about denying terrorists a home base are ringing hollow.

Moreover, beginning with his botched decision to remove Pakistan's chief justice in March, Musharraf has exposed his darker side, showing a tendency to be repressive and violent as threats to his political survival increase. In days to come, it will become clear whether Musharraf decides to fight al-Qaida and the Taliban with the help of Pakistan's democrats, or remains focused on repressing civilians seeking the end of military rule.

Husain Haqqani is a visiting scholar at the Carnegie Endowment for International Peace in Washington. He previously served as an advisor to former Pakistani Prime Ministers Benazir Bhutto and Nawaz Sharif and as Pakistan's ambassador to Sri Lanka.