What FISA capitulations are Democrats planning next?

The imminent FISA debate implicates every critical issue of constitutional protections, checks and balances and the rule of law. 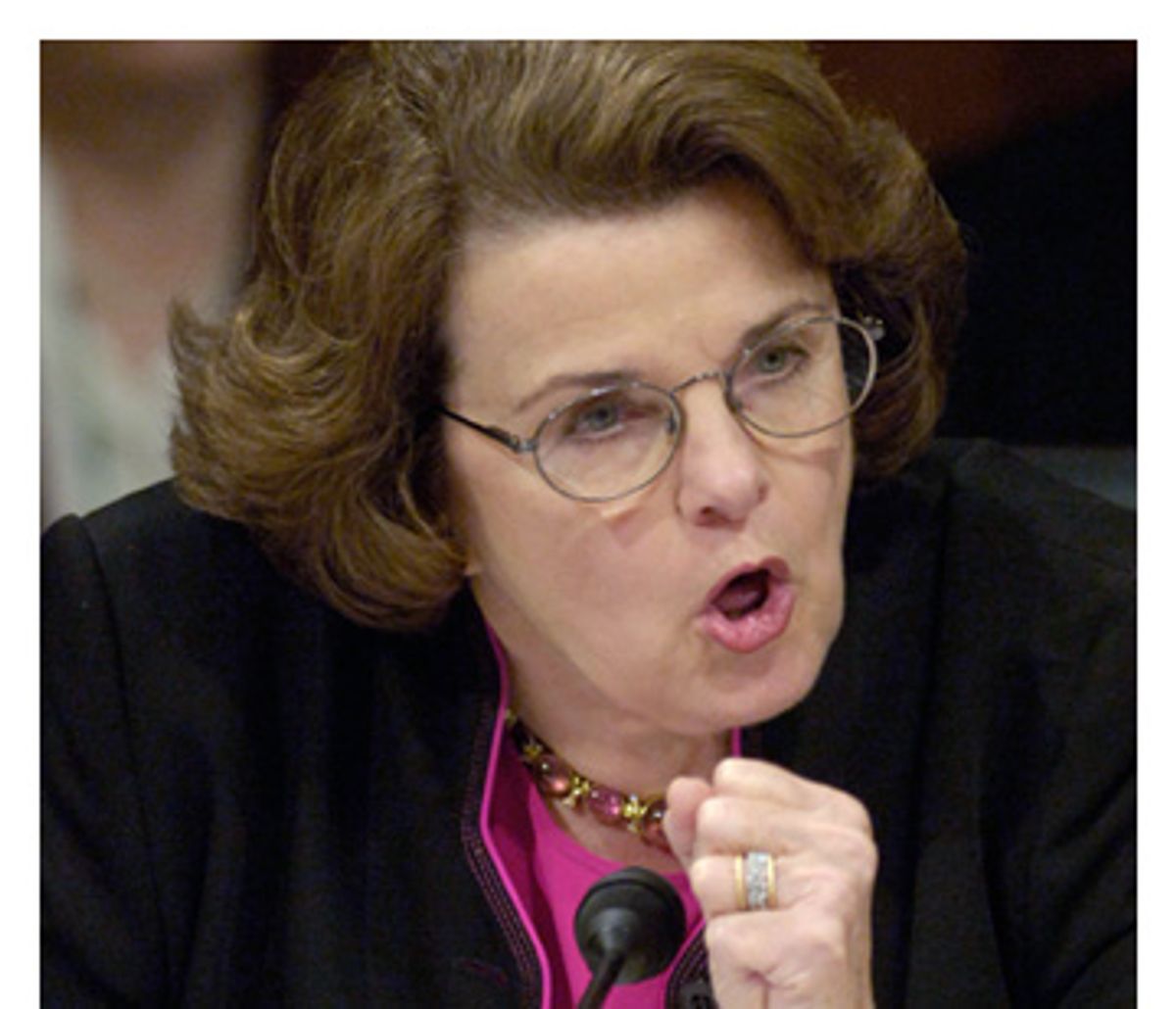 An article in this morning's NYT reports what many have long been expecting -- that Congressional Democrats are ready to capitulate to the White House again on warrantless eavesdropping just as they did in August, only this time by making their capitulation permanent:


Two months after insisting that they would roll back broad eavesdropping powers won by the Bush administration, Democrats in Congress appear ready to make concessions that could extend some crucial powers given to the National Security Agency.

Administration officials say they are confident they will win approval of the broadened authority that they secured temporarily in August as Congress rushed toward recess. Some Democratic officials concede that they may not come up with enough votes to stop approval.

This article may very well turn out to be accurate. Personally, I've been arguing since the disgraceful August FISA gift to the Bush White House that the chances were far greater that Democrats, before the six-month sunset provision elapsed, would actually pass an even worse FISA bill -- one that gave the President all the warrantless surveillance powers they gave him before plus what he wants most: retroactive amnesty for lawbreaking -- rather than adhering to their promise to "fix" what they did. So it is quite possible that Congressional Democrats will do here what they have been doing all year long, ever since they were pointlessly given control of Congress -- namely, meekly (and/or eagerly) give George Bush everything he demands.

But at least thus far, from everything I can tell, the picture is more complicated and less depressing than this NYT article suggests, and the defeat is not yet a fait accompli. To begin with, the bill to be proposed today by the House Democratic leadership actually contains some surprisingly good and important provisions.

That bill would compel the administration "to reveal to Congress the details of all electronic surveillance conducted without court orders since Sept. 11, 2001, including the so-called Terrorist Surveillance Program." It would also require the maintenance of a data base to record the identities of all Americans whose conversations are surveilled. And it provides nothing at all in the way of amnesty or immunity for lawbreaking telecoms or administration officials. The bill introduced by House leadership is a bill the White House will never accept and would certainly veto, and it is vastly better -- in important ways -- than the atrocity they enacted in August.

It is important here to recall that there is actually an amendment to FISA that is at least arguably justifiable. Even the original FISA law never required warrants in order to eavesdrop on (a) foreign-to-foreign calls or (b) calls involving a U.S. citizen where the target was a non-citizen outside the U.S. (who just happened to call into the U.S.). But recently, technological developments resulted in such calls, even foreign-foreign calls, being routed through the U.S. via fiber optics, and a FISA court ruled this year that the language of FISA requires warrants for such calls.

Even civil libertarian stalwarts such as Russ Feingold agree that it was never the intent of FISA to require warrants for those categories of calls and that amending FISA strictly to fix that problem is justifiable. And the House bill (which, I should note, I have not been able to read yet because the bill has not been publicly released and people in DC love to keep things secret, but I have spoken with many people whose expertise I trust who have read it) makes that arguably necessary change. But the bill gives the White House little else, and imposes some important requirements that the White House would never accept.

It is definitely possible that this is all just deceit, that House leaders introduced this bill strictly to placate their Progressive Caucus and their base and that they have no real intention of fighting for these provisions, but instead will give Bush what he wants once Mike McConnell starts accusing them of Helping the Terrorists and they begin negotiating in secret again. But it seems that there are important House Democrats really ready to fight on these issues, to prevent Steny Hoyer and Rahm Emanuel (who unfortunately seem to be the real Speakers of the House) from conniving like they did in August to manipulate their caucus into supporting something far worse.

The real problem here seems to be that the wretched, principle-free, administration-revering Democratic faction on the Senate Intelligence Committee -- particularly Jay Rockefeller, joined by the Dianne Feinsteins and Bill Nelsons -- is eager to reach a "compromise" with their Bush-loyal "colleagues" (such as "Kit" Bond and the Responsible, Honorable, Serious Mike McConnell). And they are, as always, even more eager to deliver bountiful gifts to their generous contributors in the telecom industry and their sleazy friends in the Clintonite-telecom-lobbying-circle.

The question, then, is to what extent the more principled members of the House Democratic caucus -- and they do exist -- can exert influence over the House Democratic leadership to prevent the worthless Senate Democratic caucus from enacting the bill the White House wants, complete with amnesty for lawbreaking telecoms and massively expanded warrantless eavesdropping powers. No rational person who has even casually observed this Congress over the last nine months would be optimistic about the likely outcome here.

But there seem to be some genuine opportunities -- with a smart and energized campaign -- to try to exert influence on this process to ensure more positive outcomes. For that reason, declaring defeat and "full capitulation" in advance -- as the NYT article does today -- seems premature.

If the Democratic Congress capitulates yet again, there will be plenty of time and opportunity for all sorts of recriminations. I think it is quite encouraging that much of the "netroots" is now devoting its energies and resources not to supporting Democrats, but to opposing Congressional Democrats who merit defeat.

Matt Stoller and Open Left, for instance, are devoting most of their energies to figuring out how to surmount the obstacles to waging effective primary challenges against Bush-supporting Democrats. The fund-raising entity run by FDL, C&L and others has begun targeting worthless Democrats, funding and running robocalls against Bush-enabling Democratic incumbents in their districts (those inclined can help fund those efforts here). MoveOn is actively considering spending large sums of money to support primary challenges against war-enabling Democrats. Obviously, there is no point in working to empower Democrats who enable and support virtually all of the worst aspects of the Bush agenda.

There is absolutely no justification whatsoever -- neither substantive nor political -- for expanding the scope of warrantless eavesdropping powers and especially for granting amnesty to lawbreaking telecoms. It is unconscionable even to consider any changes to FISA without full disclosure by the administration of how they used their illegal and secret warrantless eavesdropping powers in the past. In that regard, it is worth emphasizing that the administration from 2001 through 2004 (at least) was engaged in spying on Americans so patently illegal that the entire top level of the DOJ and the FBI Director threatened to quit if it continued -- yet we still do not know what they were doing then. How can that be? There is no justification for permitting that conduct to remain concealed from the American public, let alone from the Congress.

Warrantless eavesdropping and telecom amnesty implicate virtually every critical political value assaulted for the last six years by this administration -- our basic constitutional protections, checks and balances and the rule of law. Capitulation by the Democratic Congress here would eliminate any residual doubt (if there is any) about what this Congress really is. We shouldn't assume the worst unless and until it actually happens, and until it does, everything should be done to prevent that.

UPDATE: Democracy for America, the grass-roots group originally founded by Howard Dean in 2003, announced yesterday that it was targeting for defeat Democratic Rep. Dan Lipinski of Illinois, who has been loyally supporting the Bush administration on everything from the war to warrantless eavesdropping:


Send a message to Congress: You're on notice. Regardless of political party, when Congress won't represent the will of the American people, then DFA members will fight to replace them with someone who will.

They are supporting and funding a primary challenger who actually believes in opposing the administration's radicalism and the war. That's what is needed. Democrats who support Bush and enable the war and who are forced to face difficult primary challenges will -- even if they win -- emerge much weaker and with far fewer resources to defend their seat in the general election. As Matt Stoller said:


I don't know about you, but I'm tired of writing and calling representatives and feeling they will ignore me. I don't like that the ACLU is cut out of civil liberties legislative drafting, or that net neutrality is still nowhere in Congress. All of this is actually wasted energy; it's a negative feedback loop that substantially dampens the effectiveness of liberal activism. And obviously, I don't think that getting rid of Republicans is the whole answer, any more than electing a Democratic Congress did anything to slow the war. Politics is complex, but sometimes we can identify a systemic problem and a model to address it. The broken market for primaries is one such problem, and it's very fixable. Once Democratic leaders recognize that they represent both the Democratic Party and their district/state, their behavior will shift in important ways, and allow us to focus on other activities.

Primaries are strong positive feedback loops for activists, and a good insurance policy against betrayal.

The goal is to have a Congress that does the right thing, not a "Democratic Congress" that doesn't. As much pressure as possible should be brought to bear on the Democrats who have made the 2006 change of control virtually worthless.

UPDATE II: Think Progress has the House-prepared summary of its bill, which was introduced by House Judiciary Committee Chair John Conyers and House Intelligence Committee Chair Silvestre Reyes. As TP notes, and as I noted above, the bill -- in addition to the provisions listed there -- also "requires the Justice Department to reveal the details of all electronic surveillance conducted without court orders since 9/11."

UPDATE III: The full text of the bill introduced by Conyers and Reyes is here.

I'll be on the Mike Malloy Show on Nova M Radio (with guest host Sam Seder) tonight at 9:15 p.m. Eastern to discuss the FISA bill as well as the story regarding the torture memo from last week. Local listings and live streaming are here.

Kate Martin of the Center for National Security Studies, one of the nation's premiere FISA experts, has issued a statement (via email) which provides, in part: "We welcome the bill by Chairmen Reyes and Conyers as an important first step towards restoring the civil liberties protections lost in August. Their bill would be a vast improvement over the current law passed at the President's urging, and it is much more protective of any of the bills considered in August." Martin goes on to emphasize, however, that even this current bill violates the Fourth Amendment by failing to require individual warrants for every international call (Russ Feingold's statement made a similar objection).

Along those lines, and in response to emails and several comments (including this one from Arne Langsetmo), I should clarify one comment above that was confusing. The original FISA did not require warrants if the target, calling into the U.S., was foreign and the intercept was made from outside of the country. Where the intercept was physically made within the U.S., however, FISA did require a warrant any time the call involved a "U.S. person" even if the target was foreign. It was that critical warrant requirement -- for international calls where the intercept is made within the U.S. -- that the August bill abolished.