What you missed while watching "Oprah"

Salon watches the latest Republican debate (economy special) so you don't have to. Chevron down! Alcoa up! And Fred Thompson goes public. 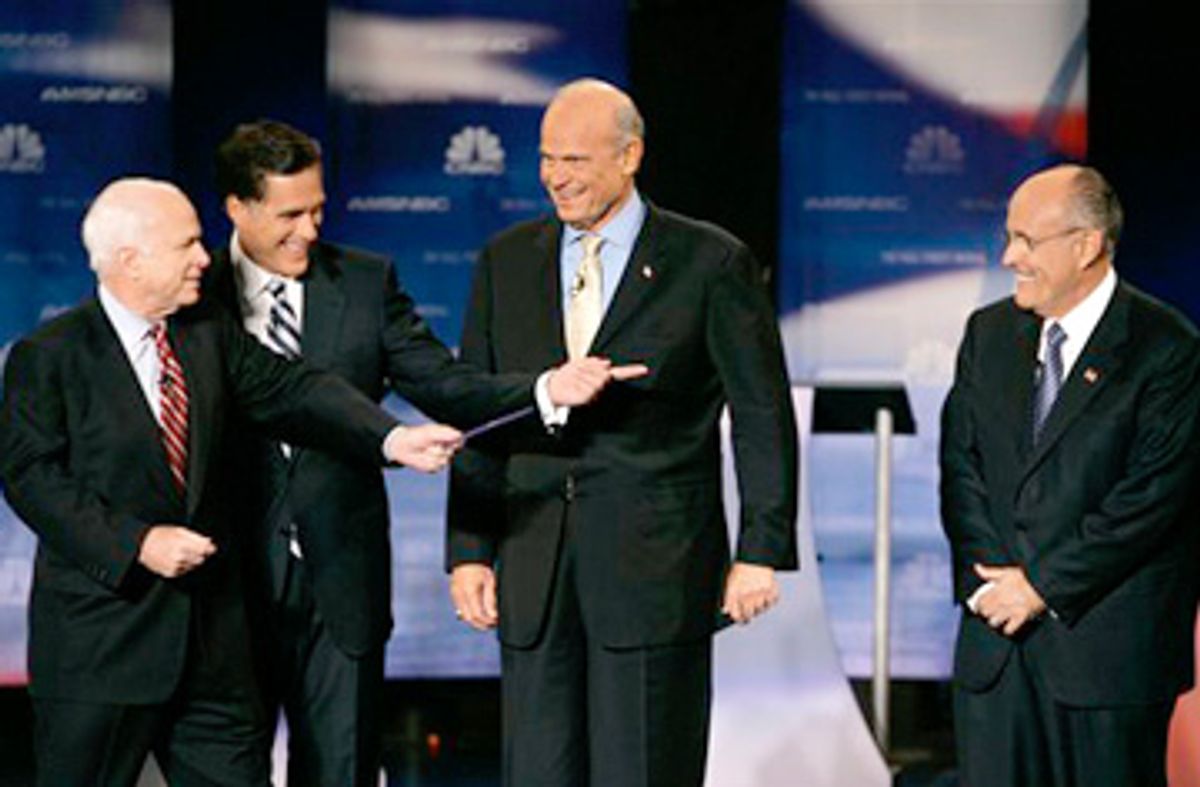 0 minutes. This debate is sponsored by CNBC, the financial news network, which means that it will be extra boring. It's 4 p.m. in New York, where the stock market has just closed with record highs for the Dow Jones and the S&P 500. But the candidates are on a stage outside Detroit, where one in every 29 homes went into foreclosure in the first half of the year. Co-host Maria Bartiromo welcomes everyone to "the heart of the American auto industry, a fitting backdrop to the economic issues facing the American people." In other words, the roaring economy stinks for working people, so Republicans have gathered near the source of the smell.

1 minute. This is also the first debate for former Tennessee Sen. Fred Thompson, who is wearing a gold-checkered tie and deep creases in his face. He is asked if the American economy is headed toward a recession. "I see no reason to believe we are heading for ..." Thompson's mind goes blank for a beat, then another. "For an economic downturn," he recovers, seconds too late. He says he understands that "pockets in the economy" like Michigan are having difficulty. "I think you always find that in a vibrant, dynamic economy." In other words, Thompson doesn't mind the smell much.

2 minutes. The lameness of this answer is immediately revealed by that of former Massachusetts Gov. Mitt Romney, who decides to pander to the needs of Michigan voters, who will be among the first Republican primary voters next January. "There's a lot we can do to strengthen Michigan," Romney says. "What Michigan is seeing, the entire nation is going to see, unless we take action now to get Michigan stronger."

12 minutes. California Rep. Duncan Hunter gets a question about taxes, and starts using lots of number: "1.8 million jobs that have moved to Communist China from the United States, including over 54,000 jobs from Michigan," he says. Then he mentions that it only took 60 minutes to make a bomber during World War II. "And I would say to my colleagues and Senator Thompson and the other senators, you all voted for 'most favored nation' trading status for Communist China," he says, launching the night's first attack on a fellow Republican. More applause.

13 minutes. Co-host Chris Matthews asks Thompson to respond. He again ignores the local concerns. "Free and fair trade has been good for America, responsible for millions of jobs in this country. We cannot turn our back on that," he says. There is no applause, but Bartiromo, who appears to distrust worker movements, stands up, turns around and tells the audience to stop applauding.

18 minutes. More numbers. Former New York Mayor Rudy Giuliani says he cut taxes 23 times in New York, by over $9 billion. He says he cut the income tax 24 percent, but got 42 percent more revenue. Romney responds by saying that a New York worker pays about 10 percent in state and local taxes, while a Boston worker pays only 5.3 percent. He says Giuliani favored a $400 million commuter tax. Giuliani responds by saying per capita spending in Massachusetts went up 8 percent under Romney, but went down 7 percent in New York under Giuliani. "I brought taxes down by 17 percent. Under [Romney], taxes went up 11 percent per capita," Giuliani says. "I led. He lagged."

20 minutes. The numbers are dizzying, painful. The vertigo is worsened by the crawls that clutter the CNBC screen. At the top it keeps flashing the glorious stats from the Dow Jones and S&P indexes. On the bottom, there are two stock tickers, moving at different speeds. Alcoa, up 1.19. Goldman Sachs, up 12.64. Las Vegas Sands, up 3. Countrywide, down 0.84. Etc. Etc. Etc. And the numbers keep coming. "My spending grew 2.2 percent a year. Yours grew 2.8 percent a year," says Romney. "I'm in favor of the line-item veto. I had it, used it 844 times."

22 minutes. Giuliani ends the horror show by changing the subject and attacking Bill Clinton. "I took President Clinton to court and I beat him," he says, referring to a court case from the 1990s about the line-item veto. To Bartiromo's dismay, the crowd applauds again.

23 minutes. Thompson gets another chance to stick his finger in the eye of Michigan voters. "In a dynamic economy there are jobs lost and there are jobs gained, and so far there have been more jobs gained," Thompson says, rejecting the idea of any government intervention. Again, no applause.

25 minutes. Arizona Sen. John McCain steps in to offer the government help that Thompson would deny. "We need to have job retraining programs. We need to go to the community colleges. We even need, if you're a senior, laid-off worker who gets another job, to make up in compensation for the amount of money that's the difference between the job that they lost," McCain says. If the candidates had stock tickers, Thompson would be down. McCain, Romney and Giuliani would be up.

33 minutes. Former Arkansas Gov. Mike Huckabee tries to get in on the game. "We're losing jobs here. That's why people in Michigan are going -- looking for something to do. And that's what has to change and it's not being changed. And this party is going to have to start addressing it or we're going to get our britches beat next year," he says. This pleases the proletariat. But according to the ticker, Alcoa's stock does not immediately move on the news.

44 minutes. The talk turns to war. "Has the Bush policy toward Iraq been a good one?" Matthews asks Thompson, who is wearing an American flag lapel pin. "We didn't go in with enough troops and we didn't know what to expect when we got there. But now we're showing signs of progress," he says, before describing Iraq as just one front in the larger war on terror.

45 minutes. Now McCain gets asked to criticize President Bush. Would he have asked more of Americans after Sept. 11 than to just go shopping? "I would have told them, first of all, consider the military, also the Peace Corps, also AmeriCorps, also neighborhood watches, also volunteer organizations that we would form up all over America -- that way we would all serve this nation," McCain says. "I'd just like to mention, I'm the only one on this stage that four years ago said this is a failed policy in Iraq, it's not going to work, it's got to be changed." He seems to hope this helps soften the unpopularity of his current support for the military strategy in Iraq. Another Alcoa stock quote scrapes the screen.

66 minutes. Huckabee is saying that the nation cannot wait another generation to develop sustainable energy technology. "Instead of running it like NASCAR," Huckabee says of the effort to improve technology, "we've been running it like taking the family station wagon in and letting Goober and Gomer take a look at it when they get time, under the shade tree." The crowd laughs. They must remember "The Andy Griffith Show."

67 minutes. Thompson seizes the opportunity to say something that does not alienate the audience. "I want to explain for my friends here who Goober and Gomer are," he says. "It's a Southern thing." This is funny. For the first time tonight, Thompson stock is rebounding. According to the crawl, Legg Mason and Burlington Northern are also up on the day.

73 minutes. Thompson gives his analysts further hope. "I think we need to tell the American people the truth. Congress' approval rating now is about 11 percent. I don't think anybody believes anything coming out of Washington anymore," he says. "Bankrupting the next generation and those yet to be born. Those are truthful things that the American people, I think, have an intuition about. We need to own up to it." Ol' Sasquatch has come alive.

82 minutes. The crawl is so hypnotic that it's hard to focus on the candidates. Thompson says something about seed corn. (Exxon up 1.22.) Colorado Rep. Tom Tancredo says something about immigration. (Chevron down 0.80.) Romney is talking about Hillary Clinton's healthcare plan. (Google up 5.31.) Now the screen says Yum! Brands is up. Why is there an exclamation point in Yum! Brands? There is an overwhelming sense of confusion, sleepiness, confusion, sleepiness ...

91 minutes. Snap out of it. They are talking unions now. Kansas Sen. Sam Brownback says his mother belonged to a mail carrier union, which prompts Tancredo to say that she didn't need a union if she worked for the government. (Amazon down 0.60) "Don't pick on my mother," says Brownback, deadpan. "I love my mother. Leave my mother out of this." (The Dow is up 120.) "I'm sure she is a sweetheart," Tancredo allows, before steering the conversation back to illegal immigration. "My mother is not an illegal immigrant," Brownback says.

107 minutes. Paul is asked if he will promise to support the Republican nominee for president next year. "Not right now I don't. Not unless they're willing to end the war and bring our troops home," he says, his voice reaching a higher pitch. McCain can't stop himself. "You don't want me then, pal," he says.

110 minutes. All the candidates are becoming giddy. They realize time is running out and the whole adventure has been a snore. So Romney busts out his canned joke of the night, though he fumbles the delivery. "Is this our sixth debate, I think? Something like that? And this has a lot, this is a lot like 'Law & Order.' It has a huge cast, goes on forever, and Fred Thompson shows up at the end." Everyone laughs.

114 minutes. Bartiromo asks Brownback about the nation's greatest economic threat. "The breakdown of the family is our biggest long-term problem we have. You've got 36 percent of the children born out of wedlock in Detroit," says Brownback, stealing rhetoric from his own stump speech, where he connects the danger of gay marriage to the decline in two-parent families. It's an amazing feat. He has managed to blame Detroit's foreclosures and layoffs on men who love men and women who love women.

117 minutes. It's almost over. "Sen. Thompson, this was your first debate. How did it feel?" asks Bartiromo. "Just like home," says Thompson. "I've enjoyed watching these fellas. I've got to admit, it was getting a little boring without me." He is only half right.