Some big donors to the former president's philanthropy also donate to Hillary's campaign. His private fundraising could be costly to a next Clinton White House. 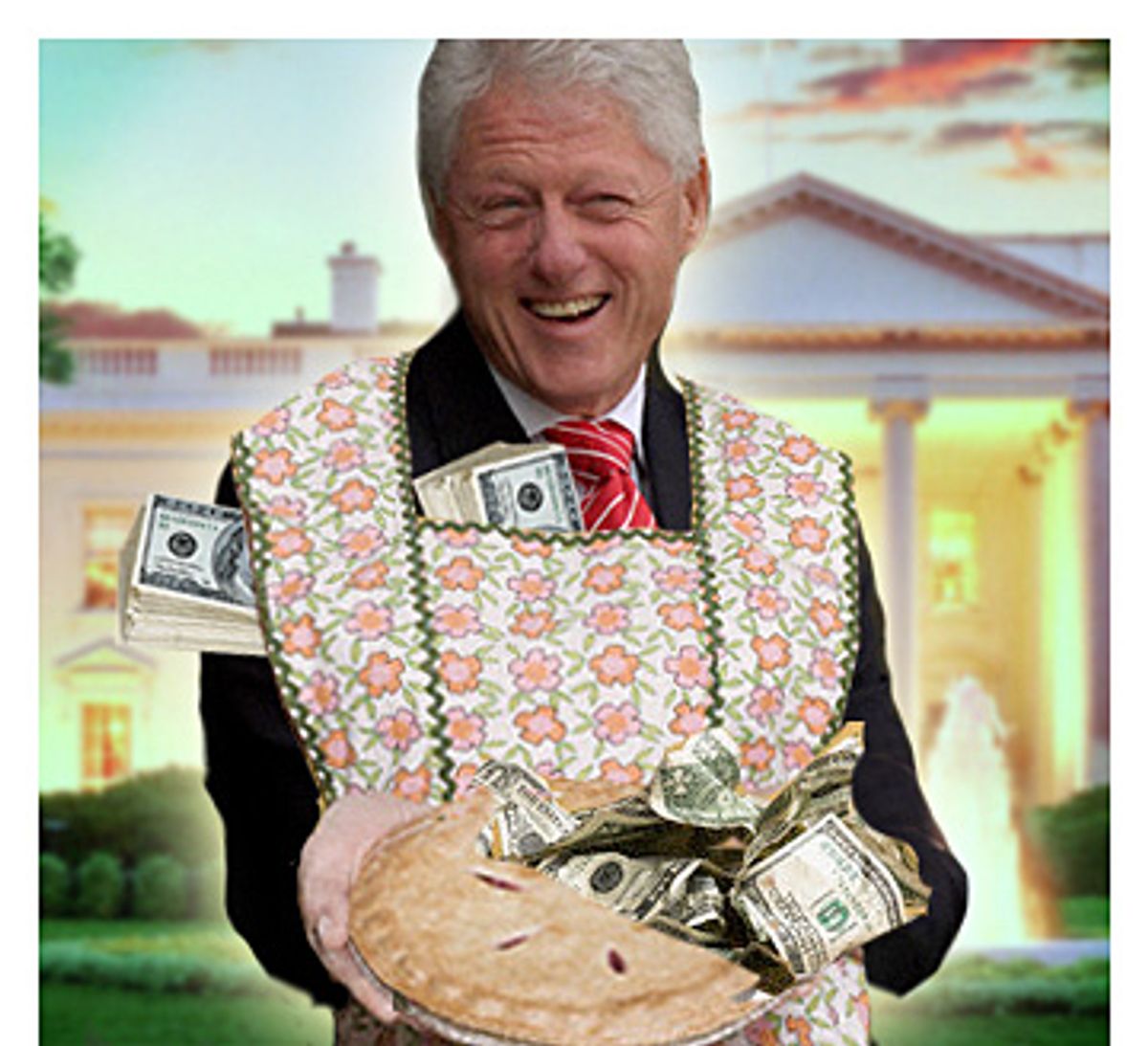 If Bill Clinton goes back to the White House with a new title in January 2009, there will be more than one fundraising juggernaut living there. Since leaving office in 2001, the former president has vacuumed in hundreds of millions of dollars for his William J. Clinton Foundation. Though the former president has declined to reveal the identities of his individual donors, public records reviewed by Salon reveal a partial picture of corporate foundations and the foundations of a network of wealthy individuals that have long fueled the Clinton money machine. Some of those same individuals are now among the top fundraisers for Hillary Clinton's campaign.

Bill Clinton's profile and political power would, of course, make him an unprecedented spouse to a sitting president. He could wield significant sway over policy, perhaps becoming a transformative figure like Dick Cheney, who dramatically expanded the influence of the vice president's role. That prospect raises the question of whether Bill Clinton's financial activity, and a partial lack of transparency about it to date, could become a political liability for a Hillary Clinton administration.

Laws designed to minimize real or perceived influence peddling limit the activities of a sitting president. But campaign and election law attorneys say nothing prohibits Bill Clinton from continuing to accept big checks made out to him or his foundation, even if his wife is elected president. "I don't know of any law that would restrict that," said Meredith McGehee, policy director at the Campaign Legal Center in Washington. "The spouse is not exactly a federal employee."

Experts say Bill Clinton's role as first gentleman would be uncharted territory with regard to managing real or perceived conflicts of interest. "We have not had to confront these issues because we have not had spouses of presidents who have had independent professional lives," said Jan Baran, the former general counsel for the Republican National Committee. "This guy is a former president. That is unique."

Bill Clinton has said publicly he would keep raising money for his foundation if his wife were elected president. As a former president, Clinton has also padded his personal bank account with more than $41 million in speaking fees from appearances for major corporations and other organizations.

Both Clinton's foundation and his wife's campaign were difficult to engage for a response to this article. A Bill Clinton spokesman, who did not want his name used, said he did not know if his boss would continue to make paid speeches for his own income if his wife were in the White House.

But if Bill Clinton raises and makes money in 2009 the way he has in recent years, it will be at a blistering pace. He started his William J. Clinton Foundation in 1997 to fund the construction of his presidential library in Little Rock, Ark. But the organization has since expanded to encompass an umbrella of nonprofit initiatives to fight HIV, assist developing countries and combat climate change. Donations have increased exponentially. He has accepted hundreds of millions in donations to date; tax records for 2005, the most recent available, show Clinton raised more than $80 million for his foundation in that year alone.

Foundations are not required by law to reveal the identities of donors, and the former president has resisted showing where the money for his is coming from. In late September, Clinton announced that if his wife were elected president, he would "feel constrained to have some greater disclosure" on prospective gifts made to his foundation after the 2008 elections. But past donors and donors making contributions up until the election would remain secret. Clinton has argued that foundations linked to other presidents enjoy similar anonymity. "Now, the people that have already given me money don't think I should disclose it, unless there is some conflict of which I am aware, and there's not," Clinton told reporters at a press conference Sept. 27, during an invitation-only meeting of his Clinton Global Initiative in New York. "Because a lot of people gave me money with the understanding that they could give anonymously, and if they gave publicly then they would become the target for every other politician in America to hit on them for the rest of their lives," he said. "And some of them are Republicans, and they may not want anybody to know they gave me money."

The tax records show that the Walmart Foundation gave $1 million, and the foundation for the family that founded Walmart, the Walton Family Foundation, kicked in another $2 million. Six-figure contributors include the foundations of AT&T, Bank of America, Anheuser-Busch, and Ford Motor Co.

To fund his foundation, Bill Clinton has also tapped into a network of foundations of major Democratic donors, according to tax records reviewed by Salon. An example is the foundation of Philip Murphy, a longtime supporter of Democrats. Murphy is now national finance chair of the Democratic National Committee. Another example is the Jonathan M. Tisch Foundation, which has given the Clinton Foundation $114,000. Tisch, chairman and CEO of Loews Hotels, has been contributor to Democrats for years.

Some contributors to Bill Clinton's foundation are also among Hillary Clinton's top fundraisers. So-called bundlers -- or "HillRaisers" in her case -- gather big money for a campaign by bundling the maximum contributions of $2,300 from individuals. The Bernard and Irene Schwartz Foundation, for example, gave Bill Clinton's foundation $700,000. Bernard L. Schwartz, chairman of BLS Investments and the former chairman and CEO of Loral Space & Communications, is also a HillRaiser. There is similar Clinton Foundation/HillRaiser overlap with Ted Waitt, the billionaire who founded Gateway Computers; New Jersey Governor Jon Corzine, a former Goldman Sachs CEO; and commercial real estate magnate Walter Shorenstein. (Walter's son, Doug, is also a HillRaiser.)

Some observers doubt that Bill Clinton is peddling potential access to the White House to make money for his foundation or for himself. And attorneys familiar with conflict-of-interest issues say they suspect that most of the money flowing toward Bill Clinton, so far, probably has had little to do with his wife's presidential prospects. "Bill Clinton obviously has his own persona and reputation," explained Baran, the former general counsel for the RNC.

But it remains to be seen how the Clintons will manage the potential problem of perceived conflicts of interest, should Hillary Clinton become the next president. For example, Bill Clinton's own personal finances could raise questions about influence from major corporations. Between 2001 and the end of 2006, an array of foreign companies have plunked down big bucks for a Bill Clinton speech, which typically generates $150,000 to $250,000 in fees. So have large U.S. companies and trade organizations that also spend millions to lobby Washington politicians. In 2006, General Motors, IBM, Cisco and the Biotechnology Industry Organization all hired Bill Clinton to speak.

One company that paid $200,000 for a Bill Clinton speech, the consumer information broker infoUSA, has also handed Bill Clinton $3 million in consulting contracts since he left the White House. Those details came out through a shareholder suit filed in 2006 alleging that the CEO of the company, Vinod Gupta, misspent millions in corporate money. The lawsuit alleged that Gupta spent money frivolously on the Clintons, even giving them the use of a private plane. Press reports have suggested that the relationship between the Clintons and Gupta -- a major Democratic donor who reportedly gave Clinton's foundation $1 million -- has cooled, following reports that infoUSA sold consumer information later used to bilk cash from the elderly.

But if Bill Clinton is down on Gupta, it did not stop him from lavishing praise on infoUSA in his new book on philanthropy, "Giving." In the book, Bill Clinton commends infoUSA for "making a concerted effort to hire people on welfare, as well as people who are disabled or who have to support themselves after getting out of unsafe domestic situations." In the book the former president does not mention his financial compensation from the company.

After leaving the White House, Bill Clinton also agreed to a consulting arrangement with billionaire investor Ronald W. Burkle, another major Democratic donor, though it is unclear how much Burkle has paid Clinton. In "Giving," the former president calls his work with Burkle "the only private sector offer I accepted."

Philanthropists who have donated to the former president's foundation said they were impressed with Bill Clinton's altruistic efforts, which have received widespread praise for being effective, pragmatic and ambitious. Clinton's philanthropic strategy is based, in part, on using business acumen and personal charisma to facilitate the development of stable, profitable markets for socially beneficial products, whether HIV drugs for developing nations or energy-efficient light bulbs. In a recent profile of this strategy in the Atlantic, Clinton is quoted as saying that it is "wrong to ask anyone to lose money." In his version of giving, everybody wins.

An example of a satisfied contributor to the Clinton Foundation is Craig Hall. A big Democratic supporter, Hall has donated to the Clinton Foundation through the Craig and Kathryn Hall Foundation. He also describes himself as "very active" in supporting Hillary Clinton for president. Along with other donors contacted by Salon, Hall expressed admiration for Bill Clinton's approach to philanthropy. "I believe in doing things to help other people," Hall said.

Other donors to Bill Clinton's foundation point to Clinton's legendary charisma and personal charm. "When you talk to him in a crowded room, you think you are the only person in the room," said Lewis Cullman, the philanthropist who pioneered the leveraged buyout. "He can turn off his peripheral vision, so that if anything goes by him, his eyes don't move. I can't do that," Cullman said.

Cullman's foundation has given Clinton's foundation more than $250,000 since 2004. He persuaded Clinton to show up at the New York headquarters of Chess in the Schools, a nonprofit organization that Cullman chairs, which aims to bring the game into New York City public school classrooms. Clinton also praises Cullman, and Chess in the Schools, in "Giving." But Cullman maintains that he "never asked [Clinton] for any personal favors at all. I don't believe in that."

Other donors recounted an understated approach by Clinton to raising money. Alfred Engelberg, counsel to the generic drug industry when it started in the early 1980s, got a call from a Clinton associate back in 2003. "Somebody asked if I would meet with former President Clinton to hear a pitch for the foundation," Engelberg remembered. But during the meeting, the two men just talked about AIDS drugs in Africa for an hour. "Typical of Bill Clinton, he never even made a pitch," said Engelberg. "Finally, after an hour I had to leave, and the president had to leave, and I said, 'It has been a very interesting conversation, but I don't think this is why you invited me here,'" he recalled. "And he said, 'I'm so into all this stuff, I forget. But I am behind on all my fundraising, and if you are inclined to help us out, do so.'" Engelberg said he is frequently solicited for charitable contributions. He called Clinton's pitch "the lowest-key non-ask." The Engelberg Foundation donated $200,000, according to tax records.

Hall praised Clinton's decision to continue his foundation work even if his wife is elected. "I would think that we as a government ought to coordinate and do more and have public policy work with private philanthropy," said Hall, who first met Clinton in 1978. But he predicted that Bill Clinton would have to make some adjustments in his fundraising activities or his disclosures if his wife were elected. "My overall view is that this is a positive thing," Hall said. "On the other hand, I'm sure they will have a lot of thought about how they will handle all of this to add more transparency and more detail."