Novelist, memoirist, activist, fantasist -- this entry from "The Salon.com Reader's Guide to Contemporary Authors" takes you on a guided tour of the celebrated writer's long literary career. 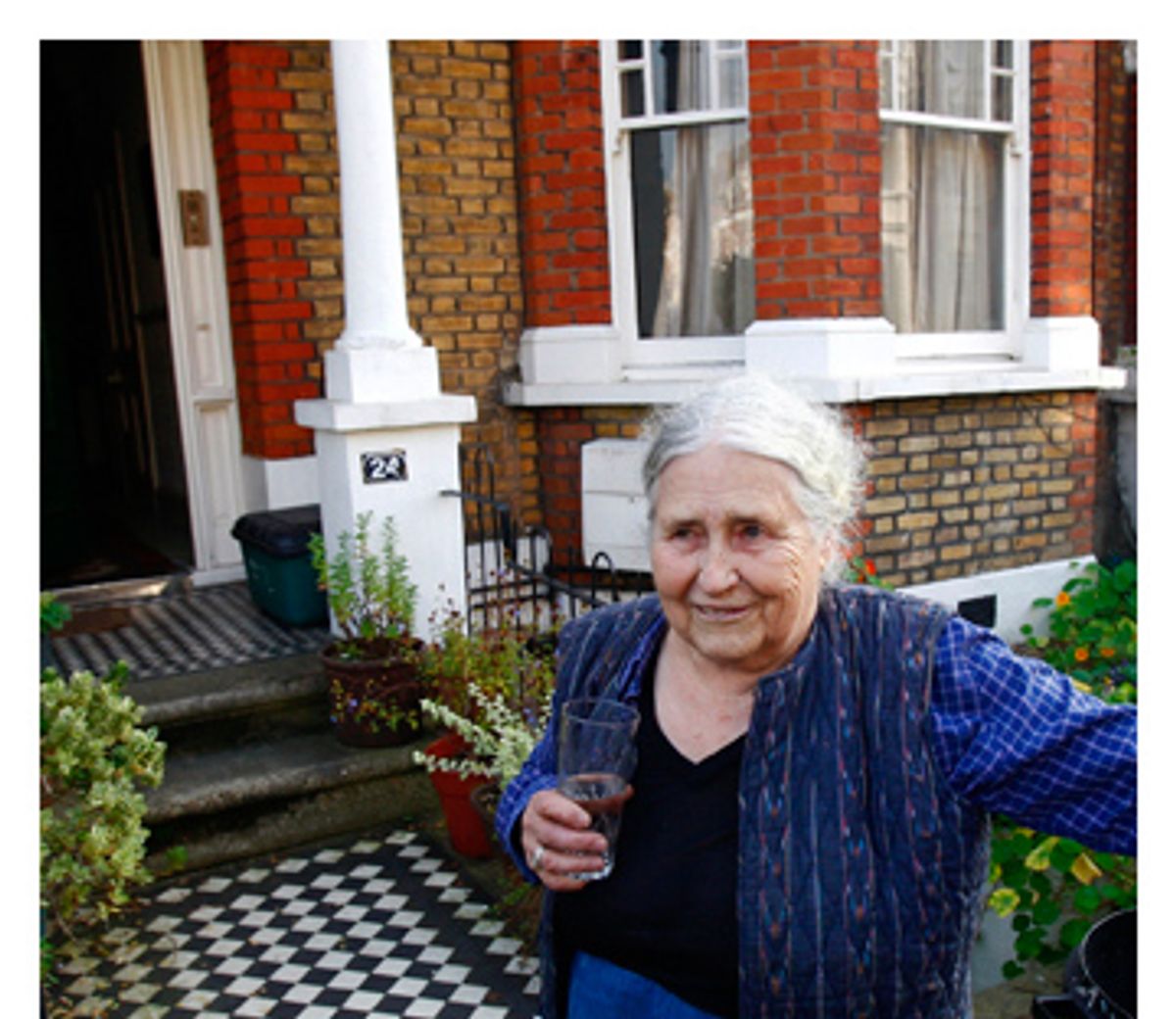 For over half a century, Doris Lessing has turned her prolific pen to just about every prose form -- fiction, autobiography, essays, drama. Yet all of her writing stems from the impulse to lay bare the grid of class, race, and gender relations that governs her middle-class characters' lives. Lessing brings the microscopic intensity of George Eliot and the combative sexual consciousness of D.H. Lawrence to bear on English culture, whether the context is the provincially hierarchical "settler" society of Southern Rhodesia in "A Proper Marriage" or the beleaguered bohemia of "free women" in "The Golden Notebook." Lessing's reputation as one of the most important novelists of the post-World War II period rests firmly on her contribution to the grand tradition of English social realism. Yet Lessing herself once dismissed George Eliot, to whom she is so often compared, as "good as far as she goes"; she prefers to claim the more cosmopolitan influence of Tolstoy and Balzac.

Indeed, this apparently most British of writers was thirty years old before she set foot in England or published her first novel. Her upbringing on a farm in Southern Rhodesia (now Zimbabwe) acquainted her more thoroughly with the isolation and racial exploitation of white colonial culture than with an imperial literary heritage. Her formal schooling ended at age fourteen, and in "Under My Skin," the first volume of her autobiography, Lessing notes with pride the real accomplishments of her youth: the ability to "set a hen, look after chickens and rabbits, worm dogs and cats, pan for gold, take samples from reefs, cook, sew, use the milk separator and churn butter, go down a mine shaft in a bucket, make cream cheese and ginger beer … drive the car, shoot pigeons and guineafowl for the pot, [and] preserve eggs." By the time she left for London in 1949, she had augmented these accomplishments with two divorces, three children, the obloquy of Communist party membership and anti-apartheid agitation, and the unpublished draft of her first novel.

Colonial race relations, political activism, and the burdens of women have remained her central concerns. Her first novel, "The Grass Is Singing," about a farmer's wife drawn into a doomed affair with an African worker, approaches its material from a distance. Lessing infuses a simple plot with the intensity of Greek tragedy: She portrays the wife's murder by the African, Moses, as the inevitable outcome of male violence and female passivity fostered by white settler culture. Lessing depicts the white experience of colonial Africa more urgently and directly in her five-novel Children of Violence sequence (1953-1969), in which she embeds the sexual, political, and intellectual development of her protagonist, Martha Quest, in a detailed evocation of the communist and progressive political and intellectual life of Rhodesia and London in the 1950s and 1960s.

Anna Wulf, the novelist heroine of Lessing's most celebrated work, "The Golden Notebook," continues Martha's quest: political activism, sexual experimentation, maternity, female friendship, and authorship all feed into her struggle for authentic, integrated selfhood. The declarative simplicity of the novel's opening line --"The two women were alone in the London flat"-- belies its explosive effect on several generations of women intellectuals struggling to reconcile the life of the mind, the imperatives of the body, and the gender roles they inherited from the 1950s. But as Lessing herself insists, "The Golden Notebook" achieved innovations beyond its contribution to what she dismissively terms "the sex war." The novel combines omniscient observation, Anna's own musings in four different journals, and sections from Anna's novel manuscript. These interwoven narratives capture both an individual consciousness and a particular cultural moment with something of the multilayered depth of James Joyce's "Ulysses." Public events shape private histories in Lessing's novels, often violently. In "The Good Terrorist," for example, middle-class Alice Mellings keeps house for a pseudo-communist cadre until a too-successful bombing destroys her illusion of control. In the chilling "The Fifth Child," terror emerges from the bosom of the family, when Harriet Lovatt gives birth to the sociopathic Ben, the embodiment of a disaffected savagery that, Lessing suggests, will inherit the urban future. Lessing anatomizes a less dramatic, but perhaps more pervasive, anguish in "The Diary of a Good Neighbor," "If the Old Could …" and "Love, Again," in which women whose familial and productive relationships have passed away confront the isolation of aging.

Lessing's scary genius lies in her ability to bring her readers face-to-face with an unadorned reflection of some of our more depressing, but all too human, features. At the same time, her realism has always coexisted with a tendency toward mysticism. Her novels of the 1970s compellingly combine a surface of social and geographic detail with journeys into an inner space that Lessing described, in "The Real Thing," as "so much more intelligent than the slow, lumbering, daylike self." In the haunting "Memoirs of a Survivor," for example, worlds separated by time and space interpenetrate through the vision of the unnamed female narrator, enabling her to save herself and her companions from extinction. But when Lessing leaves humanity entirely behind, as she does in the science fiction sequence Canopus in Argus: Archives (1979-1983), her depictions of warring galactic empires lack the individuality and emotional insight she brings to earthly society. In the novel "Mara and Dann," she returns once again to the theme of earthly apocalypse, with human, if visionary, protagonists.

In "Under My Skin," Lessing describes her long-ago attempts to explain to her young children her departure from their lives: "[I told them] I was going to change this ugly world, they would live in a beautiful world where there would be no race hatred, injustice, and so forth … One day they would thank me for [leaving] … I was absolutely sincere. There isn't much to be said for sincerity, in itself." It is typical of Lessing to emphasize the limits of good intentions, even her own. Yet in doing so, she paradoxically underlines her dedication to a more rigorous sincerity, a vision as stripped of illusion as her art can make it.