In this interview and podcast, the woman best known as Rhoda Morgenstern talks about channeling Golda Meir in the movie "Golda's Balcony." 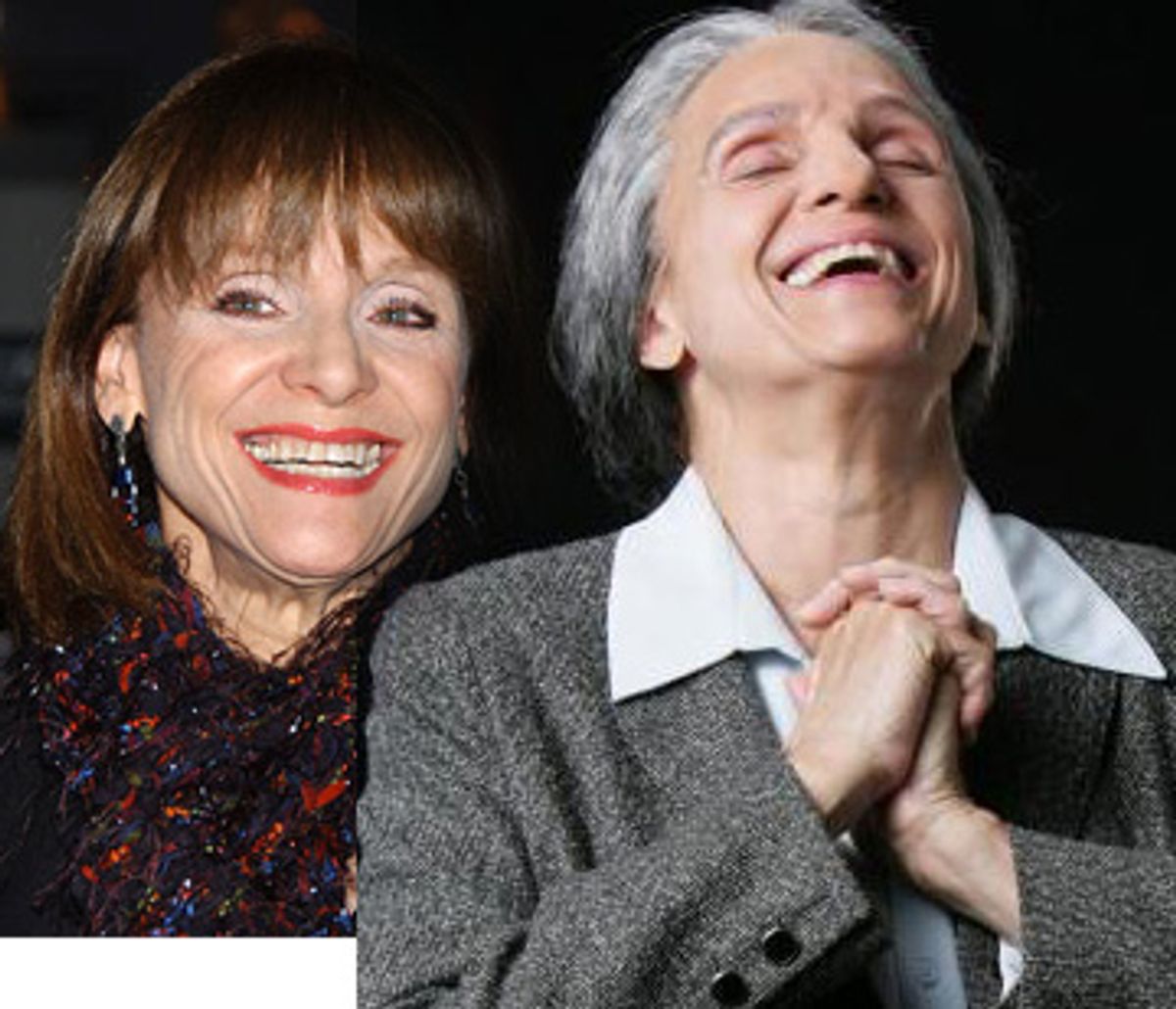 Valerie Harper reports that strangers don't address her as "Rhoda" on the street anymore. At least, not every single day. Three decades after becoming a television icon as Rhoda Morgenstern, the sassy Jewish sidekick on "The Mary Tyler Moore Show," Harper is still working, at age 67. She has been touring the country as legendary Israeli Prime Minister Golda Meir in "Golda's Balcony," the one-woman show by playwright William Gibson, and now brings that role to the big screen in a film version directed by Jeremy Kagan.

If the artificiality of "Golda's Balcony," which inhabits that awkward space in between theater and cinema, takes some getting used to, Harper's performance is remarkable. She plays not just Meir (who was born in Russia but raised mainly in Milwaukee as Goldie Meyerson), facing her biggest crisis during the 1973 Arab-Israeli war, but also her parents, her husband, various Israeli officials and other historical personages such as Henry Kissinger, King Abdullah of Jordan and Pope Paul VI. Harper herself is a former Broadway dancer and Second City comedian -- and despite her fame for playing one of the most famous New York Jews in television history, she's a lapsed Catholic who was mainly raised in California.

I recently had lunch with Harper at her Manhattan hotel, and to no one's surprise she did most of the talking. It was a purely delightful experience, full of diverging and converging anecdotes, impersonations of Carol Kane and Cloris Leachman, joyous exclamations and gleeful cackling. Here are a few highlights. (Click here to listen to a podcast of my conversation with Harper.)

You've continued working ever since "Mary Tyler Moore" and "Rhoda" went off the air. How did you avoid the fate that befalls so many actresses in middle age and later life?

It's true. I'm still working, and a lot of women, you could say, get retired. My darling friend Carol Kane, who is onstage in "Wicked" now in Los Angeles -- she once told me that every script she would get would say "mother, 33," and then suddenly you're playing people who are 55. [In Carol Kane accent]: "You know, Val, there's no 4 on the computer. It can't say 40!" Look at the television shows: There are a lot of shlubby guys, a lot of chubby guys. Or more than chubby. With stunning, stunning wives. There just seems to be a not-so-subtle pattern for women actors.

I asked Jane Fonda once, this was years ago, what was the worst thing about being a movie star at 40. She told me it was watching the leading ladies get younger and younger. She started at the same time as Bob Redford, and then suddenly he was playing opposite Debra Winger or Daryl Hannah. Now, I always thought of myself as a character actress, not a leading lady. And I could play funny. So the business has been much kinder to me than to a lot of other people.

It's all through Golda's memory. The director told me: "Go deeply, change the body, do all your stuff from Second City training and theater. You want to do a different voice and you want the audience to follow." We took out a lot of "and then he said," "and then I told him," that kind of stuff. So it's all filtered through her mind. Onstage we couldn't change costumes, of course. Onstage I was on a platform, which was the 1973 war. That part was realistic. When I stepped off that platform and went into a pool of light I was in memory-land: I was with my mother in Milwaukee, or on Cyprus remembering the refugee kids [after World War II]. The director said: "I don't want you to tell the audience, I want you to relive it." We worked very hard on doing distinct voices. As the king of Jordan, I did him as quite an Englishman, and then Jeremy told me: "I want you to do an Arab who was educated at Oxford." He speaks beautifully, but it's always tinged with a rolled R, with Middle Eastern sounds. The tough thing for me was that Golda had a deep voice -- so differentiating her from the men meant going down to the basement. I'm not sure I was always able to do that.

Obviously you would remember Golda Meir from her time as a figure on the world stage. What were your impressions of her?

Well, I lived in Manhattan and I was a young dancer on Broadway. I was in an artistic circle and I used to hang out with writers down in the Village. I have to tell you, we loved her! She was constantly in town because she was foreign minister before she was prime minister. She's so specific looking and sounding. Tovah Feldshuh [who played Meir on Broadway] had a very broad Milwaukee accent, but when I listened to Golda in interviews and newsreel footage, she had dentalized D's and T's that are very strong. Very strong-guh. She does that thing. That's Russian and Yiddish, which were her first languages. She came to this country when she was 8 years old, so she fully absorbed that language, you know? Then she landed in Milwaukee, and she did say "cahrr," "bizahrr," that broad Midwestern A.

She was very Midwestern, plain-spoken. She was very intelligent, but not intellectual. She was spellbinding with the intensity of her commitment. I used to watch her and get such a tickle. She would say things that were so direct and to the point: "Look, I'd rather we have a bad image in the world and be alive than be very well liked and be dead. We had enough dead Jews in Germany." That was from the Munich episode. Her moral certainty was so clean and clear. There was great fairness in her, but she just wasn't going to behave the way people expected Jews to behave, like victims.

You know, I was a budding feminist, having read Germaine Greer and Betty Friedan. Oh my God, I was really out there. In the NOW offices and other women's rights offices, there was always a poster of Golda, and under it, it said: "But can she type?" No matter how accomplished a woman is, it's "What's your first name, honey? And what size are your ...?" [Laughter.] She was a potent personality and personage that I just felt great about. I think she's one of the towering figures of the 20th century, male or female.

For better or worse, you're always going to be best known for one character.

Oh, listen, that's fine. With Rhoda, I really tried to do a full character who was funny. I wasn't trying to do comedy. Like George Abbott said: "The material is funny. The character is interesting, the full human being." You don't try to be funny. If the writer has written it funny, then you can lean on it. When I got Rhoda, oh my God. That was a doctorate, working with those comedy writers, with humanity, with truth, with behavior. Human beings bumping into each other, that's what they did. Now, Rhoda is a funny girl, so I got a lot of credit for being funny when it was really the writing. But I could deliver it, and I kept my accent as Bronx, as Brooklyn, as I could.

Rhoda is a blessing. She's the wind in the sails of my career. I wouldn't have a career without that role, I don't think. Something else might have come along, but it was so wonderful. I was in it for nine years. Some people still recognize me from that role, which is really nice. Even at this late age. Thank God for hair color, right?

Can you see why people view that show now as a television classic?

It's relevant to people's lives. It wasn't dumb and it wasn't all on one level. As much as "Sex and the City" is about sex, that's going to hold up too. At the heart of that show is a certain yearning, and [it has] lovely exchanges and really good acting. Or Ray Romano's show. The comedy is within the story, and that's what people are relating to. When we did it, we didn't say, "I'm going to be a television icon!" or "Oh, we're in a classic!" But Cloris Leachman would say to me, "Val, isn't this script great? We gotta come up with something to surprise the guys." Unfortunately, I see a lot of shows today that are mind-numbingly terrible.

Well, the relationship between Mary and Rhoda was really the precursor to "Sex and the City," wasn't it? Clearly those characters talked about sex. You went about as far as you could go for the time.

Oh, absolutely. They went as far as they could at the time. They did what I used to call "over-the-head" jokes. If the kids get it, they're old enough to hear it. Do you remember when my apartment burned and I had to go live with Mary? She was a dish elf, cleaning up my horrible messes, and of course we drove each other crazy. So finally I say, "My place will be ready in a week, Mar. I'll go stay in a motel." And Cloris' line, Phyllis' line, is "Well, Rhoda dear, it won't be the first time." [Laughter.] Now, a kid can hear that line, you know! That was the way they wrote. It could be very difficult to write within those parameters, but it was wonderful.