Her campaign-trail game is in top form and her lead in the polls is widening. But will voters think she's on cruise control? 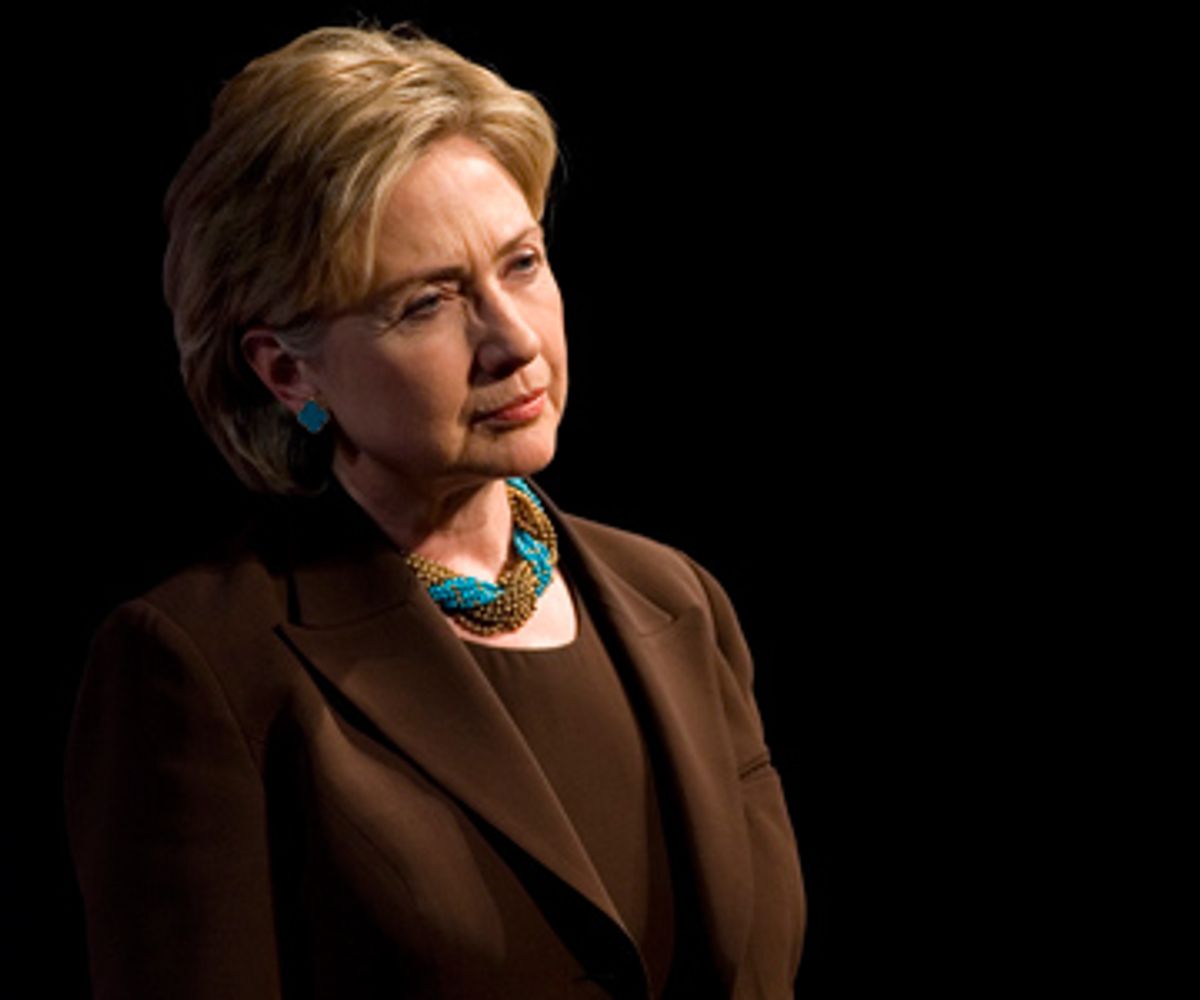 President-in-waiting Hillary Clinton says she has come for a "conversation," a candid give-and-take, a sharing moment to connect the politician with the people while the television cameras roll.

She sits with two New Hampshire voters, Kim Beauregard and 16-year-old daughter Ashley, on a stage under bright lights. Beauregard explains how hard it will be to pay for her daughter's college education.

"You would think about taking out a home equity loan?" the presidential candidate asks, as if in disbelief.

The New York senator seems stunned, crestfallen. "Well, Kim, as a mom myself, that really touched me," she says, turning now to the cameras and the crowd. "Like most mothers, Kim wants to do whatever it takes to help Ashley live out her dream. I just don't think that a hardworking family like yours should be in that position."

Hundreds of college students and elderly voters gathered at Plymouth State University burst into applause. For the better part of an hour Thursday, Clinton has been laying out a detailed plan to expand federal spending on education -- larger tuition tax credits and Pell Grants, new incentives for community colleges, and more money for vocational training. She has even promised to streamline the federal financial aid forms. But the emotional coup de grâce is yet to come. Kim Beauregard takes her cue. "Listening to what you said today gives me a lot of hope," the mother says, as if she were a guest on the "Dr. Phil" show, and has just been set on the road to recovery. The "conversation" is complete. The crowd claps its approval again.

Even amid the fall foliage of northern New England, the Clinton campaign is laying the syrup on thick. But as Clinton finishes up a weeklong swing through Iowa and New Hampshire, there is little doubt that her campaign performance is among the most polished and refined of the crowded 2008 field. Despite the synthetic staging of her events, she can come across as both warm and heartfelt, broad in her themes and specific about her plans, which includes healthcare for all Americans, tax increases for the wealthy, and the beginning of an end to the Iraq war. Though she may lack the fire of John Edwards or the inspirational message of Barack Obama, everything in Clinton Land seems to come off smoothly, without a hitch.

"She's boring as can be, but she's competent," explains Joshua Gordon, a voter from Canterbury, N.H., effectively summing up the current Democratic contest in New Hampshire. "Barack Obama was exciting, but she's competent." Then, almost with exasperation, he adds, "I think she would do a good job."

In this context, the blatant artifice of her campaign shtick hardly registers for many voters, who brag afterward about having just shaken the hand of the next president of the United States. Who cares if Clinton's shock and emotion at the Beauregard story was planned and forced? Does it matter that Kim Beauregard volunteers at the Clinton campaign in Laconia, where Ashley works as an intern? So what if Clinton held a card laying out the details of the Beauregard story even as she expressed astonishment at the details? For the Clinton campaign, what matters is that the day's message came through: Hillary Clinton cares. And Hillary Clinton has a plan.

Later in the day, Clinton appears at an apple orchard barn in Canterbury, N.H., where she begins her address by again micro-targeting the constituency in front of her. "I have a special spot in my heart for apple orchards and apple farmers," she says. "We are going to try to do whatever we can to keep our orchards."

But before long, she has returned to the tale of Kim and Ashley. "Now Ashley wants to go to college, and her mother said, 'You know, if we have to sell the house, we are going to sell the house, because she's earned it.' I got tears in my eyes," says Clinton, possibly using the phrase figuratively, since no tears were evident a few hours earlier. "I mean, just think about it," Clinton continues. "This young woman is doing everything right."

"Doing everything right" would be an apt description of the Clinton campaign's last couple of weeks, as Clinton has continued to rise in national and state polls. The Clinton team has tried to project her candidacy as an imperial effort, a foregone conclusion, even though the Democratic primary remains a closely contested battle in early voting states. In Iowa last week, she undertook a four-day, 10-city bus tour without once making herself available for a general press pool, even as she boasted of her open "conversations" on the stump. (By contrast, Republican candidate John McCain planned a two-and-a-half day swing through New Hampshire last weekend with no less than five press conferences.) "News flash!" Clinton blurted to a New York Times reporter in Iowa, after he persuaded her to disclose that she was drinking unsweetened iced tea.

But even as her campaign closes out the press and filters the public through pre-planned interactions, it increasingly claims to be opening itself up to a dialogue with the American people, playing up Clinton's empathy for that elusive demographic Clinton calls "the middle class." "You are invisible to this president," she says in Plymouth. "You will not be invisible to the next president of the United States."

This strategy is handed down from the reigning master of Democratic campaigning, former President Bill Clinton, who has made listening and empathizing his trademark weapon in two presidential campaigns. His wife can be persuasive in the same way. The only danger may be that voters will eventually realize she is prone to cruise by them on her own terms. At the apple barn, Clinton introduced herself, as usual, by saying she wanted to say just "a few things." "Then I would love to hear from all of you," she said. "And to have a conversation about whatever is on your mind." She spoke for more than 30 minutes, leaving only about half as much time to answer just five questions. Then she was back on the road, one "conversation" closer than before to the White House.