Why are Bluetooth headsets so lame?

In search of a hands-free phone headset that won't make people hate you. 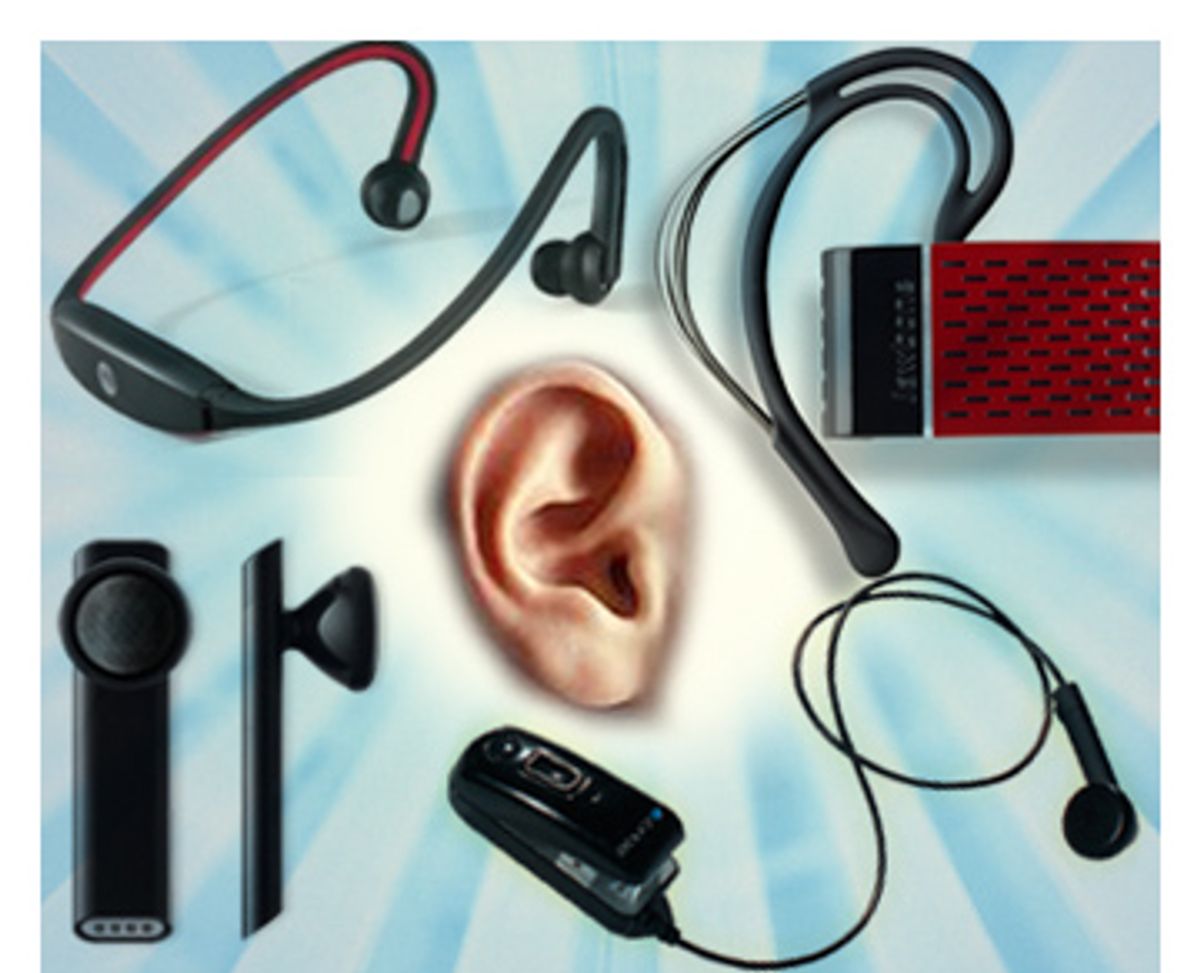 What exactly do we hate about the wireless mobile headset? I ask as a fellow hater but also a discomfited user. The device is simple enough -- a microphone and speaker that sits snugly in your ear, communicating to your tucked-away phone over the short-range radio protocol known as Bluetooth. Its advantages are straightforward and undeniable. A headset frees up your hands while you phone and drive, walk, type, shop, or just lie around. To slip one on is to feel surprisingly liberated, bionic, even. There's a phone right in your ear! But also, you want the ground to swallow you whole: According to the prevailing social sensibility, anyone who dares to don a BT headset out in the world is a self-important, unrefined boob.

But why? For about a month, I've been testing a passel of Bluetooth headsets. My mission has been to find not the most functional device but the least outwardly offensive. More important, I set out to tunnel into the source of the offense. Why does it happen that when you see a fellow -- and most of the adopters are men -- Bluetoothing on the sidewalk you reach for your revolver? "Douche," "asshat," "tool," "prick," "poseur" and other irrational and nasty taunts begin to crystallize on your tongue. You call to mind the guy from that Onion article, "New Mobile-Device Purchase Makes Asshole More Versatile."

My first thought was that the problem was aesthetic. A Bluetooth headset, like a wristwatch, is an example of what tech-biz geeks call "wearable technology." But until recently most BT headsets, unlike most wristwatches, have not embraced the requirements of high fashion. The cheapest and most popular models are made of consumer electronics-grade plastic and aspire to the industrial design of Radio Shack rather than of Rolex.

The Cardo Scala, which you can pick up for $30 to $40, depending on the specifications, is typical. A silver or black teardrop-shaped doohickey that clings to your ear on a silicone arm, the device -- which functions beautifully and has been my go-to driving headset for more than a year -- resembles something the Jetsons might give to their robot maid Rosie as a stocking stuffer. It is a look underlined by the Scala's most annoying feature: Right there on the front of it is a huge LED that blinks metronomically while the Scala's on. Because wearing a gadget in your ear that doesn't blink would not be nearly nerdcore enough.

Late last year, Aliph, a small company based in San Francisco, released a groundbreaking BT headset meant to shake up the industry's aesthetic complacency. The Aliph Jawbone, cooked up by the renowned industrial designer Yves Béhar, is a black rectangular swatch with a high-gloss metallic face done in silver, black or red mesh.

The Jawbone has been greeted like a messiah by members of the tech press, who have justified its high price -- $120! -- on the grounds of its superior audio capabilities (Aliph adapted technology it developed for DARPA to reduce the ambient noise picked up from your surroundings), and its gorgeousness. The Jawbone, which has no visible buttons and only a tiny blinky light, is the BMW of headsets: It advertises to the world that you're a comer.

Aliph's jolt to the industry worked. A number of companies have responded with headsets of similar flash, the most notable of which is Apple. The Bluetooth headset it designed as an accessory for the iPhone is even more stylish -- and more expensive, at $129 -- than the Jawbone. It is a tiny, shiny slab of black anodized aluminum, aggressively minimalist in the Apple way. Basically a 2-inch stick with an attached ear-socket, the headset has no over-the-ear loop and instead sits in your ear by the power of a snug fit alone.

I also tried the Motorola MOTOROKR S9, a stereo, two-ear device that can be used both for phone calls and for playing music (if you add a Bluetooth adapter to your iPod). The S9, which sells for about $70, looks like a wireless version of old-school behind-the-ear Walkman headphones; it's red rubber and black matte plastic, and if you were looking for a marketing adjective with which to sell the device, "sporty!" would be your best bet.

Alas, though they worked well enough, none of those headsets seemed worth their pricey tags, because none quite solved the fundamental problem of public Bluetooth shame. (And also, the Jawbone was a bit cumbersome to get on my ear in a hurry. The Apple, which can be used with phones other than the iPhone, was very comfortable but kept slipping out of my ear. The Motorola wasn't at all comfortable, and having two ears blocked doesn't seem a good idea while driving -- not to say, of course, that talking on the phone at all is a good idea while driving. It is not.)

If the chief difficulty with wireless headsets is that they telegraph self-importance, a device that goes out of its way to stun people with its beauty seemed only to exacerbate the problem. Stepping out with my Jawbone, I feared that folks would regard the ostentation as out of place on the rest of my person, as if I'd added a neon kit and spinner rims to my 1995 VW Jetta. The Motorola and Apple headsets suffered a greater shortcoming: Because they're so small, there's no visible sign that you're on the phone rather than having a conversation with that special friend in your head.

I began to wonder if maybe Aliph, Apple and Motorola had gone the wrong way. Instead of stylish and small, maybe a headset should be large and unmistakable, the better to tell the world, "Hey, I'm not crazy, I'm just on the phone!" If nobody minds, anymore, when you use a handheld phone while you're on a sidewalk or in a shopping mall, why should they mind if you're on a headset? They shouldn't, I figured, just as long as they can see the headset right there in front of your face. And so I tried out the BlueParrot B100, absolutely, positively the biggest Bluetooth headset I could find.

The BlueParrot is a classic telemarketer's headset: A flexible band fits tightly over your head, a big sponge earpiece covers your whole ear, and a long boom places the mike right at your lips. It wouldn't surprise you to learn that the BlueParrot is designed mainly for office use; its cell phone capabilities are given only a glancing mention in the user manual. To take it on the go almost seems like a gag -- indeed, too much so. Though it would probably reduce confusion -- if you're wearing a BlueParrot, nobody will think you're talking to yourself -- I don't know how well it would clear up the question of your sanity.

And then, I saw it. I'd been searching for a fashionable but not flashy headset, a model big enough that people wouldn't think I was hearing voices, but not so big that I looked like a volunteer in a telethon.

Meet the Cardo S-640, whose innovative design makes for a thoroughly satisfying headset experience. The S-640, which is $65, is two parts -- an inch-long black metallic body that contains all the electronics, and a standard earbud attached to the body with a wire. Yes, this wireless headset's got a wire. The body clips to your lapel or collar; you loop up the wired earbud to your ear to listen and to talk.

The clip-on set-up -- which only a few other headsets mimic -- offers several advantages over the all-in-ear design. First, it's visible: The headset is right on your clothing for everyone to see, and the wire leaves no mistake: "Please do not be alarmed," it announces to the world, "I am presently engaged in some kind of electronic endeavor." Also, you look like a Secret Service agent, which isn't so bad.

At the same time, though, the S-640 is unobtrusive. The part in your ear is rather small -- as small as an iPod earbud and just as comfortable -- and, when you're not on the phone, the earbud tucks neatly into the piece affixed to your collar (the whole device vibrates when you get a phone call). In other words, you don't have to keep it in your ear all the time, and thus your time looking like a tool is kept to a minimum.

The S-640 is not perfect -- the biggest problem I had was activating it while I was in the middle of a phone call (it did so only intermittently). But sound quality -- on my end and the other end -- was quite good, even in noisy environments.

Does the S-640 make Bluetoothing in public OK? Not entirely. Conduct a poll among your friends -- unless you work on Wall Street or Silicon Valley (bless you), chances are you'll find that most people consider it a no-no. But the design does offer a way to grease the wheels of social acceptability.

Bluetooth headsets seem to be at the point that cellphones were about a decade ago -- on the cusp of mass acceptance, with people beyond first adopters beginning to realize their utility. If these things do in time become as popular as phones themselves, adopting models like the S-640 would be a good way to reduce that chance that everyone thinks everyone else is a total douche.

Correction: I initially wrote that the Jawbone didn't have a blinking light. Actually, there is one, but it's so small I hadn't noticed it. It blinks white while the unit's on.