At a second meeting this weekend, leaders will mull mass defection from the GOP if the pro-choice New Yorker is the party nominee. 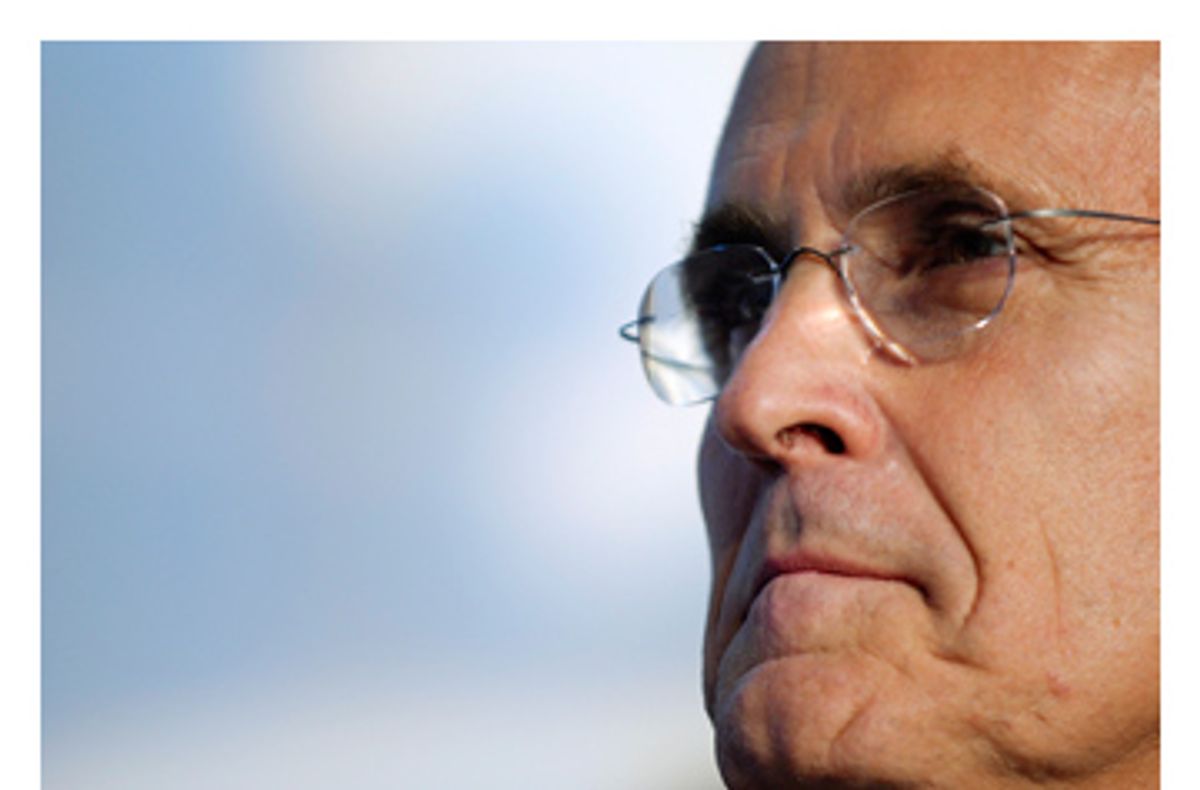 Key conservative and religious leaders will continue discussing a mass defection from the Republican Party in a private meeting at a Washington hotel Saturday afternoon, just hours after the pro-choice presidential candidate Rudy Giuliani speaks before thousands of pro-life voters.

The unnamed group of about 50 people first met in late September in Salt Lake City, sending shivers through the Republican establishment by adopting a resolution to consider a third-party candidate if Republicans nominate someone like Giuliani. "If the major political parties decide to abandon conservative principles, the cohesion of pro-family advocates will be all too apparent in 2008," warned Dr. James Dobson, of Focus on the Family, in a published article after the meeting.

In addition to Dobson, the September meeting was attended by the Family Research Council president Tony Perkins, conservative activist Richard Viguerie and former presidential candidate Gary Bauer, who called in by phone. Before the meeting ended, the group agreed to meet again this weekend at the Hilton Washington Hotel, where thousands of social conservatives are expected to gather for a "Values Voter Summit" beginning Thursday.

"There will be further exploration of what is to be done," said Howard Phillips, the president of the Conservative Caucus, who participated in the Salt Lake meeting. "And there will be some discussion of who would be a viable independent candidate."

Conservative circles have been buzzing for weeks about the possibility of a third-party bid, which remains a heavily disputed idea even among religious conservatives. On Wednesday, longtime conservative leader Paul Weyrich, president of the Free Congress Foundation, published a column laying out three requirements for a successful third-party bid: major defections of elected officials from the Republican Party, the financial backing of an independently wealthy individual, and the support of a major news organization, like the Fox News Channel or the Wall Street Journal. "If the walkout of Republicans grassroots were dramatic enough and if it enticed major figures to join, which in turn caused millionaires to follow along and caused major media continually to provide favorable treatment, a third party could work," Weyrich argued in the article.

Giuliani was the last major Republican candidate to accept the invitation to the Values Voter Summit. As a result, he is now scheduled to address the crowd just a few hours before religious and conservative leaders meet in private to discuss strategies for derailing his bid for the White House. "It is going to be an interesting juxtaposition," said one other participant in the Salt Lake meeting, who plans to attend the summit. "We will see what effect it has." Among the expected speakers at the private Saturday meeting is James Clymer, who chairs the U.S. Constitution Party, according to a person familiar with the planning.

The Values Voter Summit, which has been organized by Perkins, will provide each of the major Republican candidates a chance to address religious conservatives. On Friday, speeches will be given by John McCain, Sam Brownback, Ron Paul, Duncan Hunter, Fred Thompson, Tom Tancredo and Mitt Romney. Giuliani is expected to address the group Saturday morning, along with Mike Huckabee, who has gained traction among many conservative Christian voters, despite his poor fundraising record.

Ever since the September meeting in Salt Lake, conservative Christian leaders have been increasing their public protests of a Giuliani candidacy, arguing that it would sever the coalition between evangelical voters and the Republican Party that dates back to Ronald Reagan's 1980 presidential campaign. "The establishment just doesn't get it," said Dr. Richard Land, a leader in the Southern Baptist Convention, in a recent interview. "I cannot vote for a pro-choice candidate as a matter of conscience."

The fact that Giuliani continues to lead national polls has only increased the dissatisfaction of many conservatives, who feel betrayed by President Bush and Republicans in Congress. "The train has left the station in terms of conservatives being committed to a different relationship with the Republican Party," said Viguerie, who pioneered the use of direct mail to raise money for conservative causes. "It is not clear what track it is going to go on."