More than just political child's play, what Bush's SCHIP veto portends for the 2008 elections and beyond. 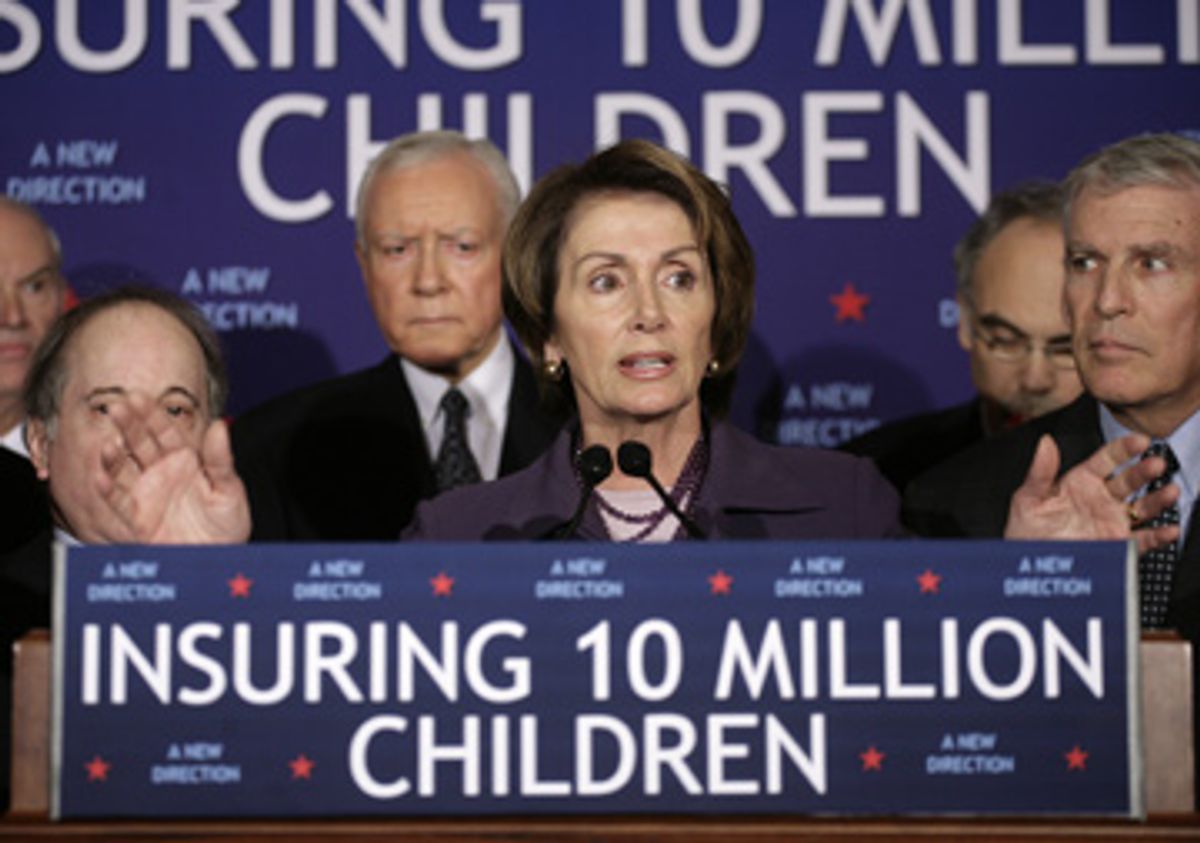 The headline could be written in advance: "HOUSE FAILS TO OVERTURN BUSH VETO." The fate of Thursday's vote on the children's health bill is as predictable as a Rudy Giuliani speech about 9/11. House Speaker Nancy Pelosi is destined to fall about 20 votes short -- even with a united Democratic caucus and the backing of about four dozen Republicans -- of the two-thirds majority necessary to enact the $35 billion expansion of the State Children's Health Insurance Program over the president's objections.

In political terms, which seem to be the measure of everything on Capitol Hill these days, the Democrats have dominated the public debate since George W. Bush issued one of his rare vetoes two weeks ago. A USA Today/Gallup Poll released this week found that voters by a margin of 52 to 32 percent have more confidence in congressional Democrats than the president to provide healthcare for children. As the campaign strategist for one vulnerable House GOP incumbent put it, "A lot of Republicans are saying, 'Where's our message on this?' The White House wasn't there. The Democrats framed it perfectly as Saving Kids versus Saving Money."

The fight over SCHIP serves as a reminder that a faint pulse still beats in the near-extinct congressional beast called reasonable Republicanism. With the unswerving support of such veteran GOP legislators as Utah's Orin Hatch and Iowa's Chuck Grassley, the bill to increase the number of children covered by SCHIP passed the Senate last month by a veto-proof 67-29 margin. Even in the more ideologically rigid House, many Republicans from marginal districts joined with the Democrats on the legislation. Democratic pollster Mark Mellman noted that the votes of these skittish Republicans "reflect the urgency that the public feels about the healthcare coverage issue."

Few issues are more likely to be replayed in the endless loop of 30-second attack ads that will punctuate the 2008 congressional races. This month Americans United for Change, a liberal advocacy group with strong labor backing, ran a series of hard-hitting commercials in the districts of vulnerable House Republicans with a voice-over similar to this one used in Minnesota: "Bush vetoed health insurance for millions of America's children. And Congresswoman Michelle Bachman voted with him." Small wonder that Brendan Daly, Pelosi's communications director, said, "Nothing clarifies the differences between the parties better than this."

The origins of this putting-children-first program lie amid the ashes of Bill Clinton's failed 1994 effort to enact comprehensive healthcare reform. Reflecting polls that showed far more public support for insuring vulnerable children than anyone else, Clinton created in his second term a healthcare subsidy program for those under 18 whose family income was a notch or two above the poverty line. As Clinton wrote in his autobiography, "If all the parents and children who were income eligible -- about 14 million -- bought into the ... program, it would take care of about one third of the uninsured population."

SCHIP was always envisioned by the Democrats as a backdoor route to universal coverage. And while enrollment levels have lagged far below the levels envisioned by Clinton (just 6.6 million children are in the program), the legislation that Bush vetoed would have added an estimated 3.5 million to the healthcare rolls. But for the Democrats, at least, the shimmering goal remains health insurance for everyone. Which is why it seems fitting that the skirmishing over SCHIP is really the opening volley of a larger and louder war over the fate of the 47 million Americans who are uninsured.

Watching the congressional debate this month offered clues about the path and the pitfalls that would await a Democratic president in 2009 who tried to enact comprehensive healthcare reform. What the Republican opponents of the SCHIP expansion initially forgot was the basic rule of politics -- you can't beat something with nothing.

Initially the only arguments that the White House offered were bleats about "socialized medicine" and complaints about the cost of the SCHIP program. Only late in the game did House Republican leader John Boehner advance a more politically potent argument, repeating as his mantra on "Fox News Sunday": "Poor kids ought to come first."

In recent days, the rhetorical wars have revolved around the figure-laden question of who should be eligible for government healthcare assistance. Bush sounded this theme at his Wednesday press conference when he said, "I want to provide enough money to make sure those 500,000 [SCHIP-eligible children] get covered. That ought to be the focus of our efforts." (In response, Pelosi's office provided persuasive documentation that the number of children missed by the current program is closer to 6 million.) Continuing the numerical flimflam, the president also claimed, "Eligibility [under SCHIP] has been increased up to $83,000. That doesn't sound like it's a program for poor children to me." In reality, this $83,000 question is based on legislation passed by a single state (New York) and rejected by the Bush administration as contrary to SCHIP regulations.

Of course, no one save academic analysts and congressional staffers can possibly keep these numbers straight. But their purpose is to obfuscate rather than illuminate. Healthcare is so complex and the details so daunting that it is tempting for voters to abandon the fray. In short, arguing against far-reaching change (which is the chosen role of the Republicans when it comes to healthcare) is a potent tactic when brandishing misleading statistics (like Bush's mythical $83,000 family) can create crippling confusion.

But Thursday's House vote will linger as a memorable political benchmark long after the precise details of the SCHIP program fade from memory. "Because of cable, the Internet and other new forms of communications, people follow debates like this closely," said Republican pollster David Winston. "They provide a context to how both parties will be perceived on healthcare in 2008."