This earnest, well-acted, politically liberal film has everything going for it. So why does it leave us feeling so unmoved? 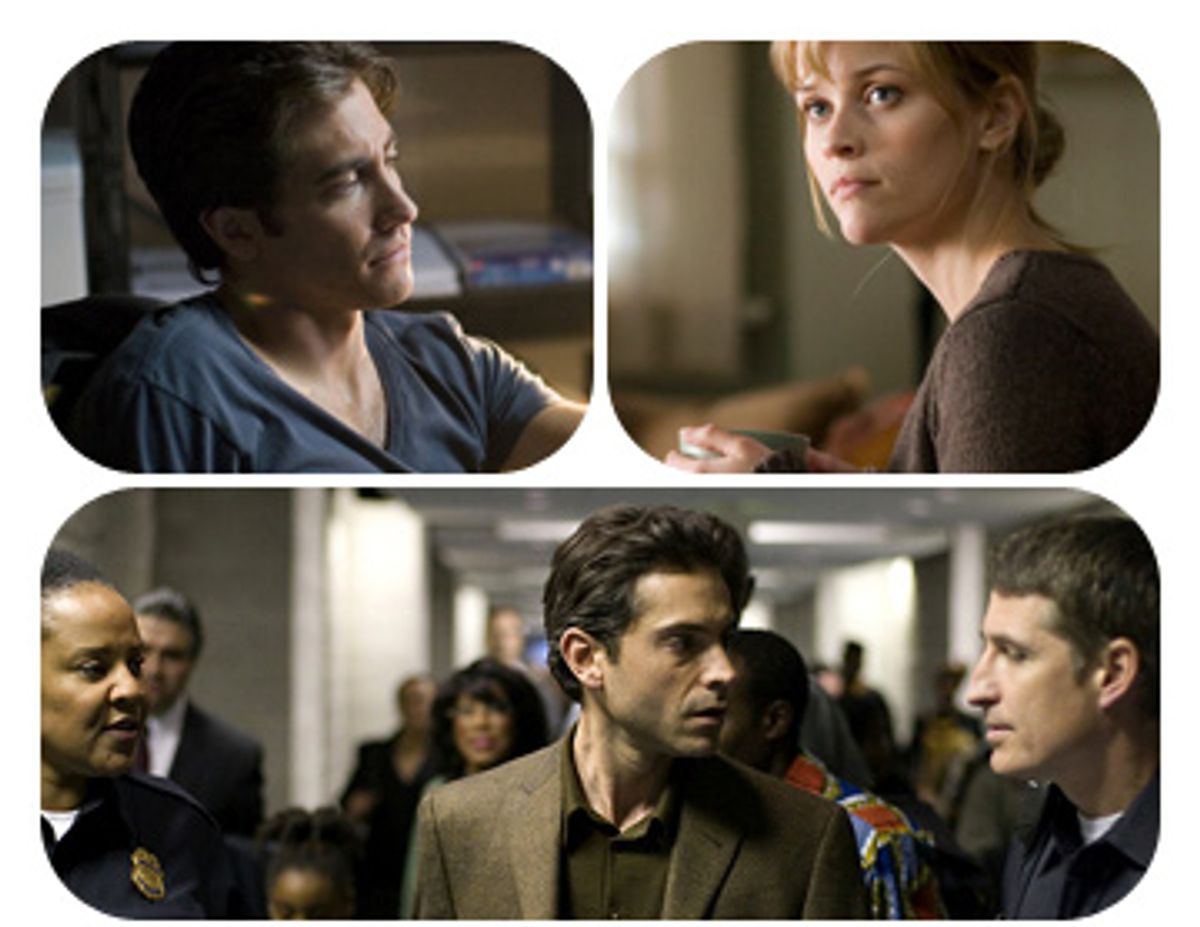 With Gavin Hood's "Rendition," we have officially entered the temperate zone of topical movies, a place where anger simmers without boiling over, where passions may not run high but they're at least lukewarm. "Rendition" is an earnest prestige picture, with solid liberal political underpinnings, that uses the U.S. government's policy of "extraordinary rendition" as the fulcrum for a fictional, if entirely believable, story. The policy was conceived in the Clinton era but insidiously gained currency, for obvious reasons, after 9/11; it allows suspected terrorists to be extradited to other countries that might, just might, use the sort of brutal interrogation tactics that -- theoretically -- we as a nation do not condone. In "Rendition," an Egyptian-American chemical engineer, Anwar El-Ibrahimi (Omar Metwally), is detained for no discernible reason en route from a conference in South Africa to his home in Chicago. When he fails to return, his wife, Isabella (Reese Witherspoon), heavily pregnant with the couple's second child, has no idea what has happened to him, but she figures out early on that something's amiss. Meanwhile, on the other side of the world in North Africa, young CIA analyst Douglas Freeman (Jake Gyllenhaal) is assigned to oversee an interrogation -- Anwar's -- in a dank, medievally appointed prison.

Hood, who made the 2005 South African drama "Tsotsi," approaches this story (the script is by Kelley Sane) with meticulous zeal. The picture is generally well acted, carefully crafted and reasonably complex in the way it views some thorny questions about terrorism. It looks good, too: Cinematographer Dion Beebe opts for precise, clear colors instead of further exhausting the desaturation tricks beloved by so many D.P.s when they're taking on weighty subjects. (The pale, murky "In the Valley of Elah," shot by Roger Deakins -- who's frequently a genius -- is Exhibit A.)

At least by the most cursory checklist standards, "Rendition" has everything going for it. But maybe that's just the problem: Now that more movies are wrangling with the Iraq war mess specifically, and with the United States' complex and fraught relationship with the Middle East in general, can a checklist of qualities -- solid acting! nicely curved dramatic arc! -- be enough to cover the more nebulous, smoke-and-mirror-obscured angles of how any of us really feels about the mess we're in? How many of these movies tease out a personal sense of culpability and responsibility, instead of just the comfortably self-congratulatory glow we get from reminding ourselves that if we're against the war (whether the Iraq war or the even more indistinct war on terror), we're on the "correct" side?

In "Rendition," Hood crisscrosses and overlaps story lines, interlacing the characters' intimate stories with the larger, more global one, folding numerous supporting characters and subplots into the mix: The old school friend that Isabella enlists to help her, a Washington insider, is played by Peter Sarsgaard. Meryl Streep appears, looking suitably, coolly, reptilian as a CIA terrorism guru. Igal Naor plays the head of the prison where Anwar is being detained, and his character has a set of personal problems that can't be solved by the thuggish practices he uses on the job: His teenage daughter, Fatima (Zineb Oukach, who gives a lovely, delicately wrought performance that's one of the best in the movie), has been acting out because she has fallen in love with Khalid (Moa Khouas), a boy who may be unsuitable husband material.

This is "Syriana"-style filmmaking, where you're not supposed to know exactly where you are, or what's going on, at every moment, a technique that spells out "serious intent" in block letters. Hood does pull off the mechanics reasonably well. Yet his proficiency only reinforces the movie's perfunctory, workmanlike quality. If you haven't thought about torture much -- if, for example, you slept through the Abu Ghraib scandal -- "Rendition" might make you think, at least just a bit. But the picture feels remote and reserved. Even the acting, much of it quite good, seems to stop just short of stepping over any line of gratuitous feeling, and sometimes a little gratuitous feeling is better than too little. Gyllenhaal's chief task here is to register gradual gradations of disbelief and horror, and that's OK, because he has a good face for it: His eyes are like haunted satellite dishes, picking up on the obvious horrors of the world that those around him have stopped seeing. Metwally, as Anwar, gives a performance steeped in isolation and disconnection: His dark eyes seem to sink further and further into his skull as the picture progresses, as if retreating from life itself. Witherspoon, often a terrific actress, may be the only one who strikes the wrong note: Her performance is alarmingly efficient, emotional right on cue -- here, she's the Mary Poppins of actors, moving in, assessing what needs to be done and getting down to work.

Maybe "Rendition" does serve its audience on some basic level by reframing a mysterious policy in dramatic, human terms, and reminding us that this sort of thing is happening right now. (The fact that our government denies that is all the more reason to believe it.) But I have strong doubts about how significant or valuable the recent war-related pictures, like "Rendition" and the even less resonant "In the Valley of Elah," really are. I've heard some of my colleagues argue that even the worst of these movies is important because, good or bad, they make us face realities. "Important" is the word that's always used, maybe because it's blandly imprecise enough to force any sort of commitment. And while the idea of "facing realities" is certainly better than ignoring them, I'm not sure these exhausting, aggressively sincere movies are enough to make anyone face up to anything.

I believe movies do have the power to rattle us, and to galvanize us. But whatever power they have needs to come from the work as a whole, not just from some vague notion of raising awareness or being current. Michael Winterbottom's "A Mighty Heart," which recounts Mariane Pearl's fruitless search for her husband, the kidnapped and subsequently slain Wall Street Journal reporter Danny Pearl, gives a true sense of the scope of our problems in the Middle East by refusing to organize them into tidy little boxes of plotting. And of the more recent Iraq-war-related movies I've seen, Brian De Palma's upcoming "Redacted" -- brutal, unsettling, almost stubbornly imperfect -- is the only one that left me feeling alive, and shaky, instead of just cozily self-righteous.

Maybe "A Mighty Heart" and "Redacted" feel so vital to me because they refuse to reorder and reorganize chaos for our safety and convenience. There's that word, "refusal," again: These movies don't want to make sense out of madness. No wonder the intricate, maplike structure and assured sensitivity of "Rendition" feel like an affront. If these new, allegedly topical movies are to make us feel anything -- to move us toward any action or even just toward any fresh realization -- they need to at least seem alive on the screen, instead of just courting our polite, measured applause.