Joaquin Phoenix, Mark Ruffalo and Jennifer Connelly work hard to give this somber, weighty picture the illusion of depth. 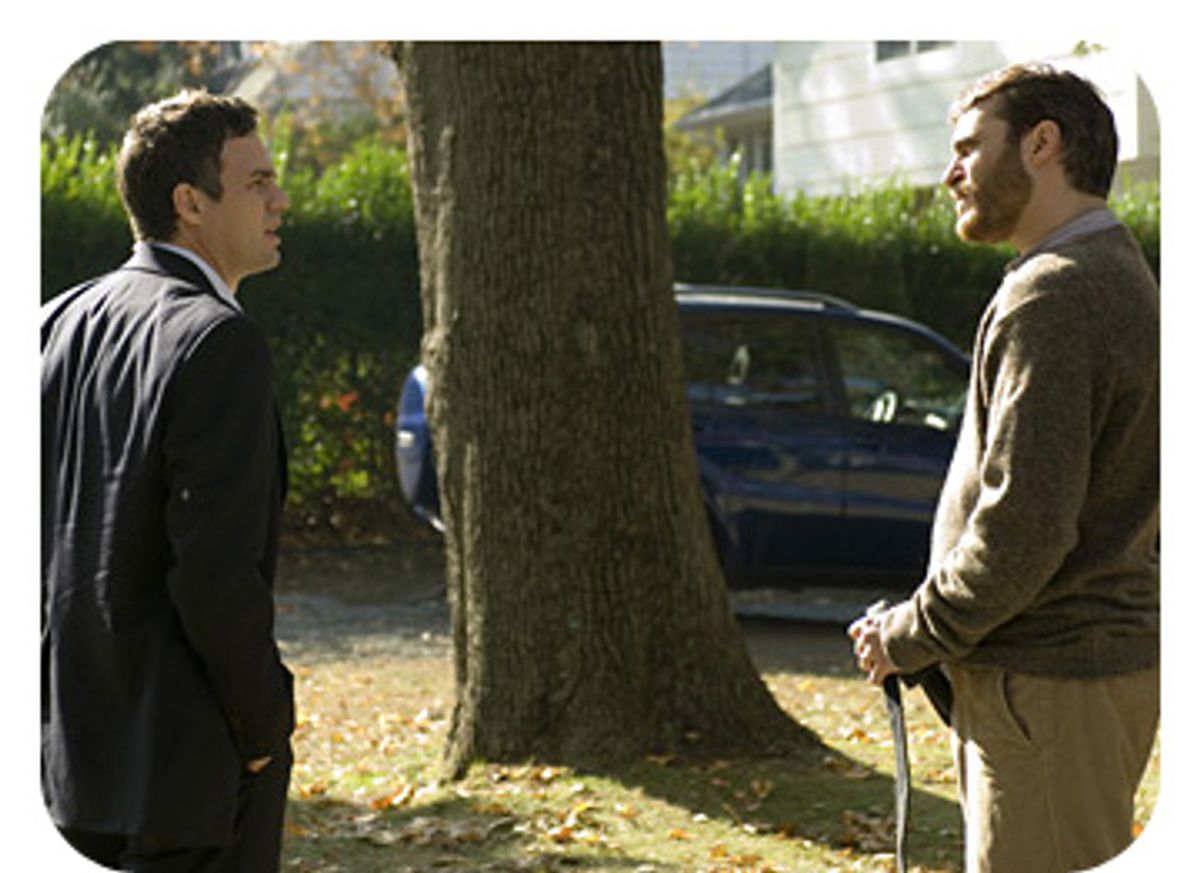 There's nothing more disheartening in the moviegoing world than somber, weighty movies based on well-reviewed literary fiction. In "Reservation Road," Terry George's adaptation of John Burnham Schwartz's 1998 novel, Dwight (Mark Ruffalo), a troubled, divorced dad in danger of losing the right to spend time with his own son, hits and kills a young boy on a dark New England road -- and then keeps driving. His own son, Lucas (Eddie Alderson), is in the car at the time, although it's too dark for him to know what's happened. When he asks, Dwight says, "Nothing -- we hit a log."

A terrible accident automatically becomes a crime and a crisis of conscience. Meanwhile, Ethan and Jennifer (Joaquin Phoenix and Jennifer Connelly), the dead boy's grief-stricken parents, attempt to rebuild their lives, but Ethan can't move on: He becomes consumed with finding the vehicle, and the man, who killed his son.

You can probably guess by now that "Reservation Road" is stuffed fat with humanities-class essay themes: Grief, manhood, responsibility, revenge and hatred -- discuss! But even though the actors work hard to give the movie the illusion of depth and substance, the real meaning of those themes doesn't emerge in any significant way: They're flat colors dabbled onto the surface of the movie with a dark, dainty brush, not powerful, saturated hues that radiate from its core.

George's last picture was the 2004 "Hotel Rwanda," a mainstream movie with a deep political conscience. "Reservation Road" is supposedly another movie about conscience, about the moral price a human being pays when he fails to do the right thing. But "Reservation Road" ends up repeating and restating its mission so frequently that it just comes off as so much jabbering on. Ruffalo takes painstaking care to make Dwight both reprehensible and sympathetic, and his lost, hangdog quality just about makes it work. Phoenix has a harder time of it, simply because his character isn't allowed simply to feel grief -- he's required to turn into something of a crazed monster, too, and Phoenix manages to cling to shreds of dignity, but barely. Connelly has some terrific scenes, including one in which she comes to believe she's responsible for her son's death. But she's a shadowy background figure in the movie, probably because her character, unlike the men around her, is eminently sturdy and sensible, even in the face of suffering. In other words, in the movie's view, she's just not that interesting.

The story's dramatic twists and turns depend mostly on implausible coincidences, and the actors, particularly the younger ones, are saddled with some pretty hulking dialogue. At one point Ethan tells his young daughter, Emma (Elle Fanning), that her brother is "with the angels now." Later, as she's preparing for a big piano recital (her brother had been a promising cellist), Emma asks, "Can you hear music if you're in heaven?" Kids find death tremendously hard to deal with, so talk about angels and heaven is perfectly valid. But instead of just allowing these lines to drift by, George hits them as if they were major chords: They stop the movie cold each time. "Reservation Road" is all about the darkness that lurks in the hearts of men, and although it's dark in there, all right, the power of redemption is always a possibility. This dour, ponderous picture just can't show the way.