A mixed message for Rudy from the Christian right

Giuliani gets applause, but not votes, from a pro-Huckabee crowd at the Values Voter Summit. 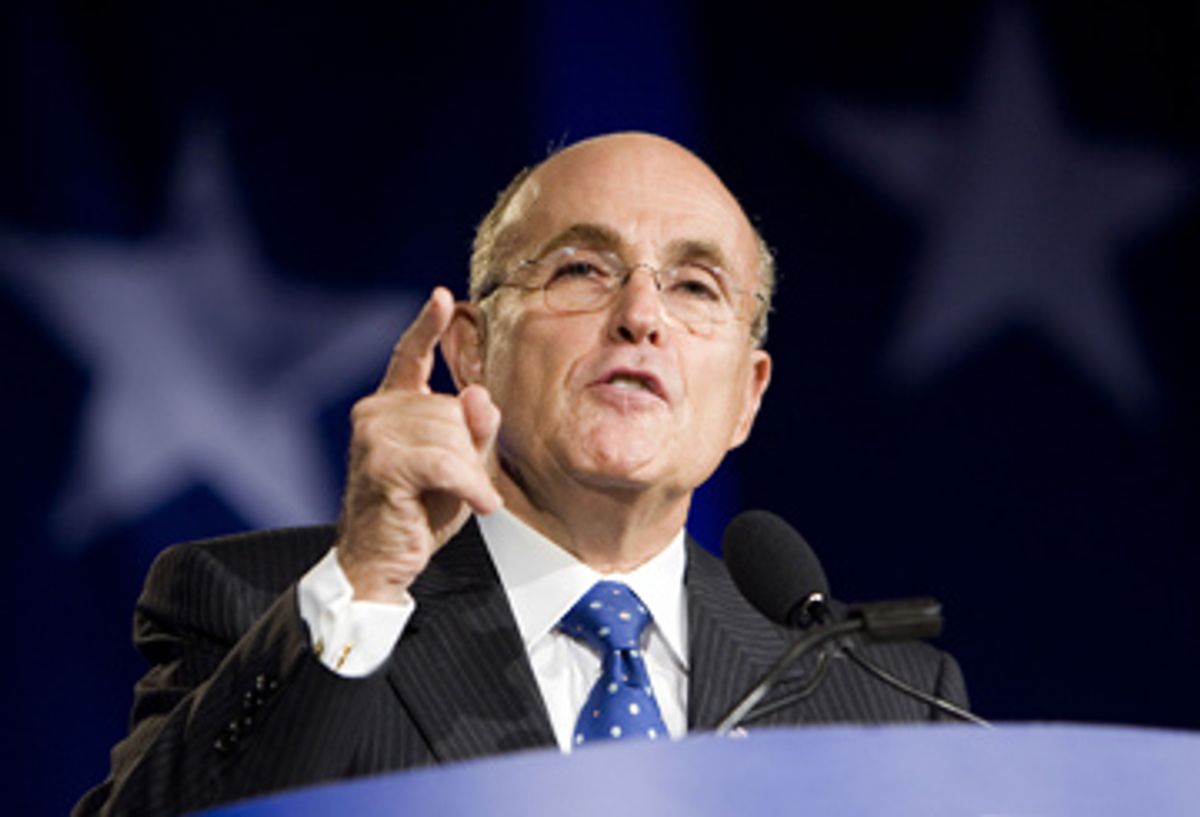 From the back of the ballroom, it was hard to see if Rudy Giuliani had a forked tongue. The jumbo video screens that bracketed the stage Saturday morning failed to show any horns growing from his shiny forehead. And when the former New York mayor turned to leave, receiving a standing ovation from most of the 2,000 religious conservatives in attendance, no pointy red tail jutted out from beneath his suit jacket.

In other words, Giuliani seemed to be having a pretty good day at the Values Voter Summit, where the pro-choice candidate came to pay his respects to the Republican Party's pro-life base, which has been staging a slow-motion revolt against his candidacy. "I come to you today as I would if I were your president, with an open mind and an open heart, and all I ask is that you do the same," Giuliani said at the beginning of the 40-minute address. "Please know this, you have absolutely nothing to fear from me."

As time passed, the skeptical crowd seemed to warm to him. He spoke of his efforts in New York to clean up pornography (applause), his support of home schooling (applause), and his plans to nominate anti-Roe v. Wade judges like Justices Scalia and Thomas (lots of applause). He boasted of attempting to deny funding for a museum that showed a painting of the Virgin Mary made partly from elephant dung and girly mag money shots. He said he supported parental notification for abortion, a ban on partial-birth abortion, and the denial of taxpayer funding for abortion.

"I've made mistakes in my life," Giuliani said, an allusion to his three marriages and estranged children. "I pray for forgiveness. I pray for strength. I pray for guidance. I feel my own faith deeply, although maybe more privately than some."

Hours later, however, when the votes in a straw poll were counted, Giuliani had received less than 2 percent. The clear preference of those in attendance at the Values Voter Summit was former Arkansas Gov. (and ordained Baptist minister) Mike Huckabee, who finished second overall but a strong first among those casting their votes on-site. Giuliani, meanwhile, finished second in a diferent tally. He trailed only Hillary Clinton among contenders of both parties as the "least acceptable" candidate.

For weeks, socially conservative leaders have been gradually increasing their opposition to a Giuliani nomination, fearful of his continued lead in the mostly symbolic national polls. Some Republicans have threatened to form a third party if he wins, and they continued their conversations in a private meeting here Saturday afternoon. Others have threatened to stay home from the polls. Still more have promised to drop their traditional volunteer roles as Republican Party volunteers, leaving phone calls unmade and envelopes unstuffed.

But all the early agitation against Giuliani, including talk of a third party, has also provoked a backlash from some conservative leaders, which was on full display this weekend. "Social conservatives have always been against suicide and I think at the end of the day we are going to be against political suicide too," Gary Bauer, the former presidential candidate, told Salon when asked about the third-party threat. Ohio Rep. Jean Schmidt, who famously suggested that her Democratic House colleague Rep. Jack Murtha, a Marine veteran, was a coward, came down from the Capitol to plead for GOP unity. "When we get through the primary, stand behind the individual that is at least the better alternative to what we have on the other side," she said.

Conservative jurist Robert Bork, the failed Supreme Court nominee echoed those sentiments during a Saturday morning speech. "The defection of enough conservatives to ensure victory for the Democrats will mean that for 20 or 30 years Roe will be entrenched," Bork said of the Supreme Court ruling that ensures the legality of abortion. "It's good to stand on principle, but it's also good to understand what your ultimate objective is."

All of them were talking about the prospect of a general election that pitted Giuliani against a pro-choice Democrat. But they were also getting ahead of themselves. The Republican nomination is still anybody's fight, and no single candidate is likely to become a clear favorite for conservative evangelical voters before the end of the year. Former Massachusetts Gov. Mitt Romney won the conference straw poll, but only because his supporters stuffed the ballots, so to speak, with more than 1,000 online votes from people who were not in attendance at the Washington Hilton. Mike Huckabee, who continues to run an underfunded campaign, garnered 51 percent of the in-person votes and earned the loudest cheers and the warmest reception from the conservative crowd. Meanwhile, a new poll from CBS News showed that former Tennessee Sen. Fred Thompson has the most national support among Republicans who attend church each week.

"There was a moment of insanity about 18 months ago where we all thought that we could all agree," Bauer said. "But that is about as likely as herding cats." He added that if Giuliani won the nomination, he would be reluctantly willing to "lead a delegation" of pro-life leaders to see if they could reach some agreement that would allow religious voters to support the mayor. "Mayor Giuliani knows that he can't be president without us," Bauer added. "There is a lot of ground I think that we can stand on and negotiate and see if we can come up with something that is passable to everybody."

All this strategizing and speculating took place amid the oddly carnivalesque atmosphere that tends to accompany the culture war. The exhibition hall offered "Pet your dog, not your date" T-shirts for the abstinence-minded, and handouts criticizing Huckabee for owning shares of Apple Computer, a company that allegedly "distributes pornography; supports homosexuality." There were textbooks for Bible study in public schools and the displays of two different artisans who specialized in life-size metal sculptures of Jesus Christ. For much of the Friday evening, pamphleteers for the Log Cabin Republicans, a pro-gay group, worked the hallway just a few steps from Jeff Gannon, a former conservative White House reporter who was accused of moonlighting as a male escort. Minutes later, Ben Stein, the sometime actor and conservative gadfly, spoke to the crowd, ominously warning that "Darwinists are afraid -- they are hiding something."

Former Pennsylvania Sen. Rick Santorum read from a floor debate he once had with New York Sen. Hillary Clinton about abortion. Former House Speaker Newt Gingrich noted that the words "Laus Deo," or "Glory to God," are inscribed atop the Washington Monument. A former Miss Colorado named Deborah Flora warned of Hollywood's liberal agenda. "Transsexuals are this season's hot new thing," she said. Perhaps the most surreal appearance came courtesy of the Rabbi Daniel Lapin, who declared "the Bible is our blueprint," despite the fact that his organization, Towards Tradition, was used by convicted lobbyist Jack Abramoff to funnel money secretly from an online gambling company to the wife of a convicted former advisor to the indicted former House Majority Leader Tom DeLay.

But the highlight of the conference were the candidates, who each came to make their pitch. Arizona Sen. John McCain spoke movingly about his time as a prisoner of war. "I have been pro-life my entire public career," he said. "I believe I am the only major candidate in either party who can make that claim." Texas Rep. Ron Paul spoke out against the war in Iraq, an unpopular position at the conference, though he still placed third in the straw poll on the strength of online voting. Thompson delivered one of the most memorable lines of the conference, when he described his first act if he is elected president. "I would go into the Oval Office and close the door and pray for the wisdom to know what is right," he said, a line that earned him a standing ovation. Mike Huckabee reminded attendees, "I come today not as one who comes to you, but as one who comes from you."

When it was all over, it was not clear if values voters had any more direction or unanimity than before they met, making the winner Giuliani almost by default. Carol Franz, of Owego, N.Y., was among those few in attendance who said she planned to vote for Giuliani in the straw poll. "It's not going to do me any good to be pro-life if I am blown up," she told Salon. Her message -- security can trump family values -- brings joy to the Giuliani campaign, just as it strikes fear into the hearts of religious activists, who could see their hold on the GOP diminish if Giuliani wins the nomination. But it is still too early to read the tea leaves. One of the only things known for certain about the Republican nomination is that it will be decided by millions of voters across the country, not the 2,000 or so who gathered this weekend in Washington.