Meat is not the No. 1 cause of global warming. Yet our diet is cooking the planet, and one surprising staple turns down the heat. 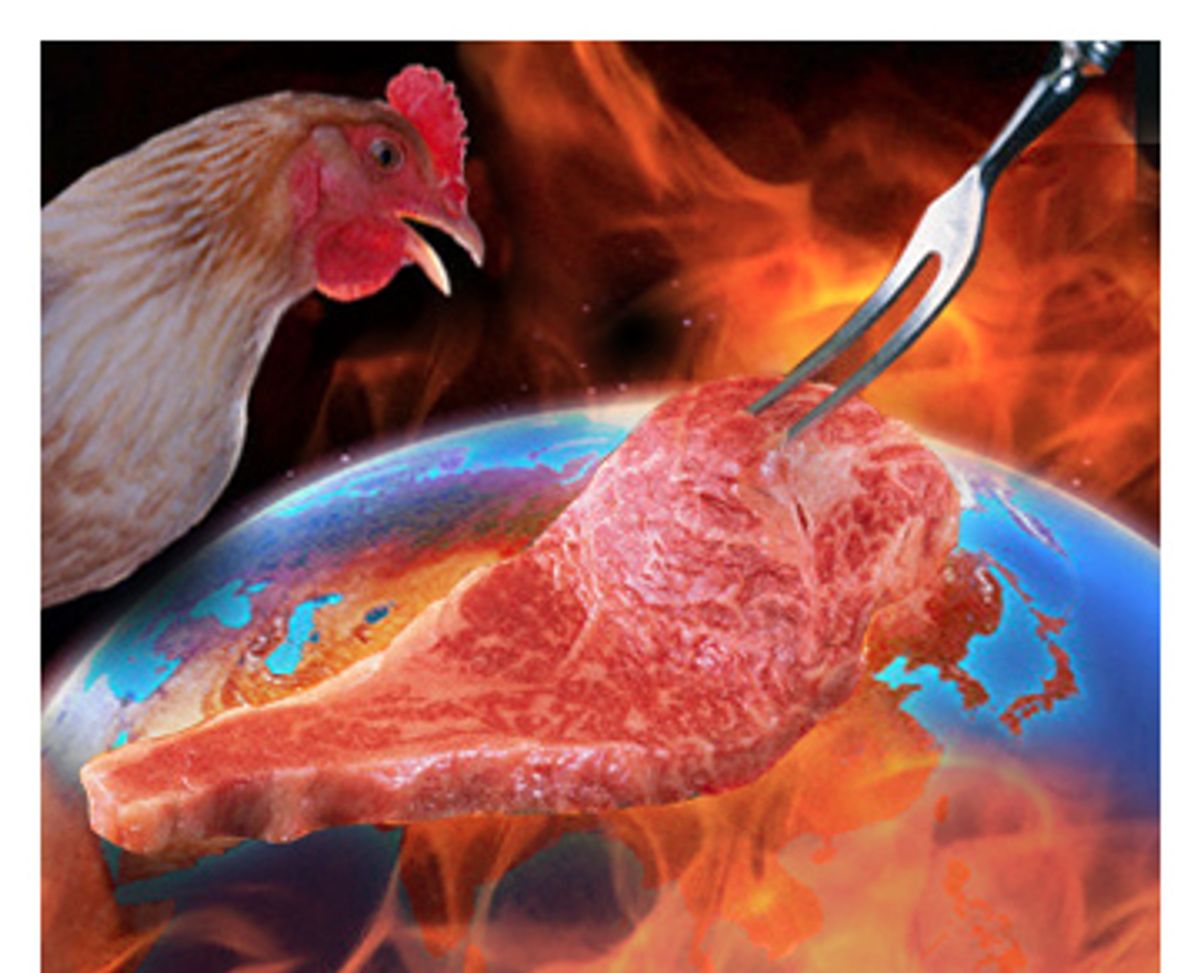 At lunchtime in late September, on a relatively untraveled stretch of sidewalk outside the U.S. State Department, demonstrators from People for the Ethical Treatment of Animals attempted to catch the attention of, well, anyone.

Inside the building, Condoleezza Rice was trying to convince world leaders that the U.S. was serious about global warming; outside, two PETA members handed out fliers featuring a photo of Paul McCartney. "Think you can be a meat-eating environmentalist?" it read. "Think again!" Two other protesters, dressed in chicken suits, displayed a green and chartreuse banner: "CliMEAT Change," it read. "Meat: #1 cause of global warming."

Earlier that morning, as dignitaries entered the building, PETA made an effort to drive its message home. The group draped its banner across a champagne-colored Hummer and drove it around the State Department. By noon, the Hummer was parked across the street. "The plan didn't work so well because of security and the way the roads are set up," confessed Matt Prescott, PETA's manager of factory farm campaigns.

Undaunted, PETA protesters, in October, drove a truck-mounted billboard around venues in Austin, Texas, and Denver, where Al Gore lectured about climate change. It featured a caricature of the Nobel laureate, potbellied and brandishing a partially eaten poultry drumstick. "Too Chicken to Become Vegetarian?" the billboard taunted Gore, and concluded, again: "Meat Is the #1 Cause of Global Warming."

Not quite. As Phil Gutis, the Natural Resources Defense Council's communications director and an erstwhile PETA member, says, "I wouldn't look to PETA for science." The No. 1 cause of global warming is burning fossil fuels for electric power. Still, the group raises an important point. A November 2006 United Nations Food and Agriculture Organization report found that livestock accounts for 18 percent of global warming emissions worldwide, more than the entire transportation sector.

Here in the U.S., livestock's impact is not quite so extreme: Six percent of our greenhouse gases come from livestock production, compared with 19 percent from cars, light trucks and airplanes. Still, for conscious eaters, those statistics are worth fleshing out.

According to the FAO, livestock production is a top cause of the world's many environmental problems: deforestation, acid rain, dead zones in the ocean, land degradation, water pollution, species extinction and, most threatening of all, global warming. "We looked at every step of the commodity chain, from feed production to consumption," says Henning Steinfeld, chief of the FAO's livestock policy branch.

To begin with, Steinfeld says, "a lot of climate change damage is associated with clearing forest land, either for pastures or for feed crops." Trees cut down to make room for cattle or soybeans no longer sequester carbon. Those trees are burned or decompose, creating carbon dioxide, the most common greenhouse gas.

Likewise, soil trampled underfoot or exposed to chemical fertilizers and pesticides retains significantly less carbon than forest soil or soil used to produce organic crops. "This is a particularly acute problem in Latin America," Steinfeld says. Over 70 percent of the Amazon's deforested land is used for pasture, and a substantial part of the remaining land is used for feed crops. Much of the world's arable land is devoted to animal feed. In the U.S., 60 percent of the agricultural output of the Missouri-Mississippi basin is used to feed livestock.

Just as significant as those impacts are the potent methane and nitrous oxide emissions generated by livestock production. Livestock emit about a third of human-caused methane production and two-thirds of human-caused nitrous oxide. Cattle, bison, sheep and goats, "because of the specific features of their digestion, release methane from their mouths," Steinfeld says. In other words, they burp out a lot of methane. That gas traps 23 times more heat per ton than carbon dioxide.

Steinfeld notes that "methane is also released from manure." That's particularly true when it's stored in anaerobic conditions, such as the so-called waste lagoons common in U.S. industrial pork and dairy production, or in manure piles connected to American cattle feedlots. Feedlots are relatively unknown in other parts of the world.

In the U.S., there's currently much more manure than land to spread it on. Consequently, the slurry is often sprayed on fields at concentrations that exceed by 200 times the underlying soil's ability to incorporate the nitrogen the manure contains. The result? Nitrous oxide, a product of the manure's decomposition. As a global warming gas, the compound has a heat-trapping potential 296 times that of carbon dioxide.

The Humane Society of the United States, good cop to PETA's bad, has mounted its own effort to link livestock to global warming. Along with PETA, it advocates eliminating animal products from our diets, implying that all of these products -- meat, dairy and eggs -- are equally destructive. But that's just not the case. "If you want to look at this globally," says Steinfeld, "beef is absolutely the worst."

Is grass-fed beef any better than the feedlot kind? Steinfeld says feedlot cows and grazed cattle create about the same amounts of greenhouse gases. Grazing, he says, "is not necessarily an environmentally benign form of production." Even when deforestation and overgrazing are accounted for, producing beef still requires an enormous amount of land. And, individually, cows fed on forage release more methane that the grain-fed cows of mass feedlots.

Cornell University professor of ecology and agricultural sciences David Pimental disagrees. "Feedlot beef requires twice as much fossil fuel energy to produce as grass-fed beef," Pimentel says. According to his estimates, producing 1 pound of feedlot beef results in the production of 8 pounds of carbon dioxide. That's the equivalent of a third of a gallon of gasoline. Despite more burping by cows fed on forage, Pimentel says, their overall emissions remain lower.

Pork and dairy production occupies a middle ground, greenhouse-gas-wise, Pimentel says. Both dairy cows and hogs need a lot of feed, most of which is produced using nonorganic methods. But milk cows require less grain to make their product than do their cattle cousins. And pigs don't belch methane, although the waste lagoons associated with industrial pork production do. The same goes for waste from large dairy operations.

Welcome, then, the savior of environmentally concerned carnivores everywhere: the chicken. Unlike cattle, chickens don't burp methane. They also have an amazing ability to turn a relatively small amount of grain into a large amount of protein. A chicken requires 2 pounds of grain to produce a pound of meat, compared with about 6 pounds of grain for a feedlot cow and 3 pounds for a pig. Poultry waste produces only about one-tenth of the methane of hog and cattle manure.

That's not to say chicken production is pure. The waste often contains the cancer-causing element arsenic, which is added to most U.S. chicken feed to promote growth. Plus, chicken poop frequently has mercury in it, possibly from fish meal used as feed, or from vaccines. And let's be clear: The life of an industrially raised chicken is not a happy one. The growing birds are warehoused in spaces so small they can't flap their wings, turn around or preen. Breeding for maximum meat production has resulted in animals whose bodies have difficulty supporting their own weight, meaning chickens live much of their lives in pain.

Still, chickens are such efficient producers of protein that a study in the science journal Earth Interactions finds that Americans who eat poultry, dairy and eggs, but not red meat, are responsible for fewer greenhouse gases than those who consume a vegetarian diet that includes dairy and eggs. "Astonishingly enough," says study coauthor Gidon Eshel, a Bard College geophysicist, "the poultry diet is actually better than lacto-ovo vegetarian." In other words, a roast chicken dinner is better for the planet than a cheese pizza. "If you need to eat dead animals, poultry is the way to go," says Eshel, a vegan.

Eshel suggests that those eating with the climate in mind also steer clear of "large, predatory fish," such as tuna, swordfish and shark. To catch them, he notes, "you have to schlep halfway across the ocean, and then you come back with less than a paltry amount of edible meat. It's a big energy investment." Salmon farming is also notoriously energy inefficient, Eshel says. He advises fish lovers to turn to sardines, anchovies and herring, or any non-overfished coastal species.

Eshel notes that the difference between a vegan diet and one that includes cheeseburgers is less than 2 tons of greenhouse gases a year. That's about the equivalent of switching from a Camry to a Prius. The average American is responsible for about 26 tons annually, so if the entire U.S. population went vegan, we'd reduce our greenhouse gas emissions by only 6 percent.

How can you combat global warming with your fork? Simply by consuming less beef, pork and dairy. Choose beef products produced in the U.S. rather than in Latin America. And generally speaking, pick grass-fed meats and those produced on small, local farms rather than in industrial operations. Beef eaters might also want to keep an eye out for the USDA's forthcoming "grass-fed" label, which has received high marks from a number of environmentalists and small-farm advocates.

Becoming a vegan is your best choice. But if despite all rational arguments, you find yourself jonesing for some flesh, look to PETA's mobile billboard for inspiration, and have yourself a drumstick.

Liz Galst is a regular contributor to Plenty. Her writing has appeared in the New York Times, Newsweek, and Better Homes & Gardens.