From Turkey to Iraq to Pakistan, the mounting chaos proves the White House is just winging it. 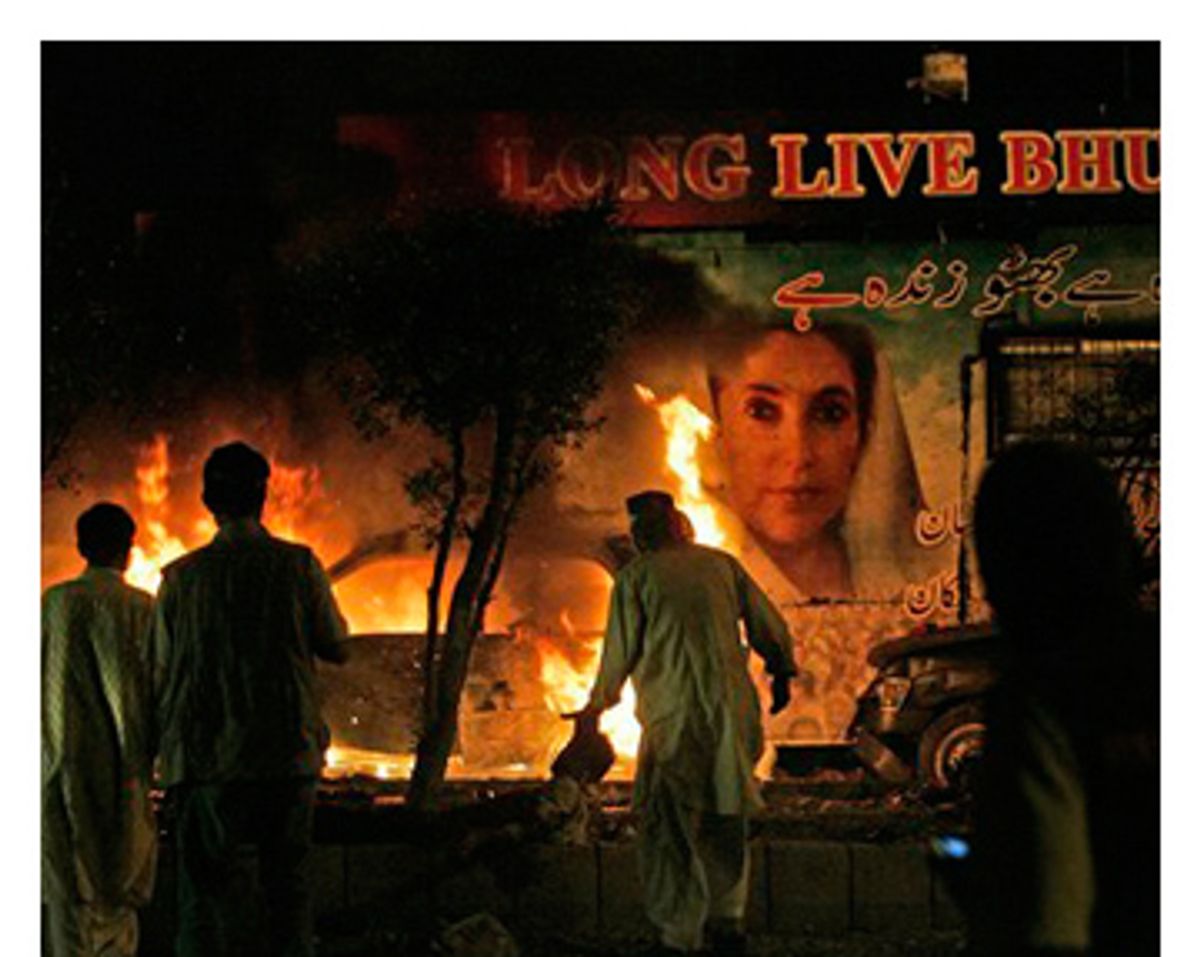 The Bush administration once imagined that its presence in Afghanistan and Iraq would be anchored by friendly neighbors, Turkey to the west and Pakistan to the east. Last week, as the situation in Iraq and Afghanistan continued to deteriorate, the anchors themselves also came loose.

On Sunday, just days after the Turkish Parliament authorized an invasion of Iraqi Kurdistan, Kurdish guerrillas ambushed and killed 17 Turkish soldiers inside Turkey. In Karachi, Pakistan, a massive bomb nearly killed U.S.-backed Benazir Bhutto, who was supposed to help stabilize the country. The Bush administration's entire Middle East policy is coming undone -- if it even has a policy left, other than just sticking its fingers in the multiple, and multiplying, holes in the dike.

In Iraq, the Kurds of the north are the United States' most reliable allies. In addition to the 5.5 million Kurds in Iraq, however, persons speaking dialects of Kurdish constitute around 11 million of neighboring Turkey's 70 million citizens. There are another 4 million Kurds next door in Iran, and up to 2 million in Syria. All three of Iraq's northern neighbors fear that Kurdish nationalism, which has been fostered by the U.S. occupation of Iraq, could tear them apart. Opposition to that nationalism could provide a platform for an alliance of Syria, Turkey and Iran -- a nightmare for the Bush administration. Washington had hoped to isolate Syria, an ally of both Iran and of Hezbollah in Lebanon. That's not how it is turning out.

Even after Turkey declined to sign on to the Iraq war, then U.S. Deputy Secretary of Defense Paul Wolfowitz praised it in April 2003 as a dependable ally and secularizing model for the Muslim world. Since then, however, Washington's relationship with Ankara has turned increasingly sour over U.S. favoritism toward the Kurds.

The Turkish Parliament late last week passed a resolution permitting the military to make incursions into Iraq in order to chase down guerrillas operating on both sides of the border. Syria's Bashar al-Assad piled on, appearing to support the Turkish move, though under pressure from Baghdad he denied he had urged an invasion. Iran also fears Kurdish terrorism and has shelled Kurdish villages in Iraq in reprisal for guerrilla attacks in Iranian Kurdistan. Perhaps as a quid pro quo for Syrian support against the Kurds, Turkey offered this weekend to broker an agreement between Syria and Lebanon. Bush's partiality to the Kurds has provided Damascus an opening for newly warm relations with Ankara.

On Sunday, guerrillas of the Kurdish Workers Party (PKK) ambushed a Turkish military convoy, killing 17 soldiers. The Turkish military counterattacked, killing 32 persons it said were guerrillas. In Istanbul on Sunday, a thousand demonstrators came out to denounce the PKK. In the two weeks prior to Sunday, the PKK had killed 28 Turkish soldiers. The mustachioed president of Turkey, Abdullah Gul, a member of the Islamist-leaning AK Party, vowed that his country would "pay any price" to protect itself. The new tensions have roiled the world petroleum markets, hurt the Turkish economy, and further destabilized an already violent Iraq.

The Iraqi leadership, already presiding over a failed state, agonized at being caught in the crossfire. The Iraqi president, the avuncular Kurd Jalal Talabani, hypocritically condemned al-Assad for urging a foreign military invasion of an Arab country, even though he himself had supported the U.S. invasion of Iraq. Massoud Barzani, the pudgy turbaned leader of the Kurdistan Regional Authority, warned that his government would defend its citizens and not sit idly by if Turkish troops rolled through Kurdish cities in Iraq. On Sunday, the Iraqi Parliament, having been unable to agree on virtually any internal issue or enact any benchmark legislation, promptly passed a resolution condemning the Turkish Parliament.

The ratcheting up of tensions between Turkey and the Kurdistan Regional Authority threatens to throw the last relatively quiet and prosperous corner of Iraq into turmoil. The turmoil is likely only beginning. The Iraqi Kurds are seeking to incorporate the oil-rich province of Kirkuk into their confederacy, and there is strong popular support for seceding from Iraq altogether. Turkish officials have repeatedly said that either move would set off a Turkish invasion.

As usual, the Bush administration has reacted to these predictable problems in a purely ad hoc manner. There is no evidence that anyone in the administration has crafted a policy for dealing with tensions between Ankara and America's Kurdish allies. The U.S. State Department has designated the PKK a terrorist group, but the PKK is given safe harbor by the Kurdistan Regional Authority of northern Iraq. What will Bush do about having wound up as the de facto protector of a radical peasant guerrilla group that is attacking the troops of a NATO ally? If the United States acts against the PKK, it risks alienating the Iraqi Kurds, whose pro-American peshmerga fighters perform security duties and enlist as troops in the new Iraqi army. If Bush does not restrain the PKK, then he is playing Mullah Omar to its al-Qaida and "harboring" terrorists, which he trumpeted six years ago as grounds for war.

Meanwhile, to the east, another supposed bulwark against terror is wobbling. The Bush administration had lovingly brokered the deal whereby Bhutto was allowed to return to Pakistan by military dictator Pervez Musharraf. Musharraf lacks grassroots support and has been shaken by powerful challenges from the country's supreme court, by his brutal crackdown on Muslim militants at the Red Mosque last summer, and by his continued inability to subdue the tribal forces and al-Qaida remnants in Waziristan and other rugged provinces along the Afghan border.

Washington therefore became convinced that Bhutto, who heads the popular Pakistan People's Party, might be able to come back as prime minister and cohabit with Musharraf, who was recently elected president by the Parliament and who has pledged to take off his uniform and rule as a civilian. Bhutto was elected prime minister twice, serving from 1988 to 1990 and 1993 to 1996, but both stints ended amid charges of corruption. She had lived in exile since 1999, when a military coup brought Musharraf to power. There are open cases against her in both Pakistan and Switzerland, and Interpol put her on an international wanted list in 2006 at the Musharraf regime's prompting. Washington persuaded Islamabad to drop the charges against her so that she could return.

The huge explosion that greeted Bhutto in her home turf of Karachi, however, suggests that her arrival is hardly the remedy for Pakistan's instability. Bush administration officials were dismayed when some in Bhutto's circle, such as still-exiled husband Asif Ali Zardari, initially accused the Musharraf government of being implicated in the bombing. The prospect of peace between the Bhutto camp and Musharraf's authoritarian military has been put into question.

Bhutto herself was quick to fix the blame on al-Qaida and militants in the tribal areas of the north. More dispassionate observers, such as Afghanistan expert Barnett Rubin, have also suggested that the Karachi bombing may well have been planned by militants in northern Pakistan, where the remnants of al-Qaida are thought to be hiding out. Those areas are ethnically and politically linked to southern Afghanistan, which has seen a resurgence of guerrilla violence.

And in Afghanistan itself, the situation is in a similar downward spiral. More than 5,000 Afghans have been killed in political violence so far this year, 600 of them members of the police. The United States and its NATO allies in Afghanistan allege that a revived Taliban has taken the city of Musa Qala in Helmand province. This weekend, major gun battles in that vicinity left 50 guerrillas dead. Farther to the east in Kunar province, Afghan and NATO troops engaged Pushtun guerrillas, killing 20, with one civilian dead and six wounded. Just last Thursday, a Taliban ambush near Kandahar wounded 6 NATO soldiers.

The U.S. and NATO military commander in Afghanistan, Gen. Dan McNeill, has said that between 40 and 60 percent of the Pushtun guerrilla movement is funded by opium poppies, the source of most of Western Europe's heroin. The dilemma for the Americans and NATO is that eradicating the lucrative poppy crops in southern Pushtun provinces such as Helmand appears to be driving more villagers into the ranks of the revived Taliban. Afghanistan has only some 30,000 poorly trained troops, less than half the 70,000 that NATO had planned on by this point, and the government of Hamid Karzai shows little prospect of being able to stand against insurgents for years to come.

Along with the failed state in Iraq, which has neglected to use any decrease in violence temporarily provided by the recent U.S. troop escalation to effect political reconciliation, the deteriorating situation in Afghanistan raises the specter of a collapse of both of Bush's major state-building projects. The turmoil in Turkey and Pakistan damages U.S. relations with two allies that are key to shoring up the countries under American occupation.

After Sept. 11, when the Bush administration launched its global "war on terror," the United States enjoyed some clear assets in fighting the al-Qaida terrorist network. In the Middle East, the United States had the support of secular Turkey, a NATO member. The long relationship of the powerful Pakistani military with that of the United States enabled Bush to turn the military dictator Musharraf against the Taliban, which Pakistan had earlier sponsored. Shiite Iran announced that it would provide help to the United States in its war on the hyper-Sunni Taliban regime. Baathist Syria and Iraq, secular Arab nationalist regimes, were potential bulwarks against Sunni radicalism in the Levant.

Like a drunken millionaire gambling away a fortune at a Las Vegas casino, the Bush administration squandered all the assets it began with by invading Iraq and unleashing chaos in the Gulf. The secular Baath Party in Iraq was replaced by Shiite fundamentalists, Sunni Salafi fundamentalists and Kurdish separatists. The pressure the Bush administration put on the Pakistani military government to combat Muslim militants in that country weakened the legitimacy of Musharraf, whom the Pakistani public increasingly viewed as an oppressive American puppet. Iraqi Kurdistan's willingness to give safe haven to the PKK alienated Turkey from both the new Iraqi government and its American patrons. Search-and-destroy missions in Afghanistan have predictably turned increasing numbers of Pushtun villagers against the United States, NATO and Karzai. The thunder of the bomb in Karachi and the Turkish shells in Iraqi Kurdistan may well be the sound of Bush losing his "war on terror."