Why I miss the dead-tree newspaper

I can skim the print version of the the New York Times in a half-hour. You can't do that online! 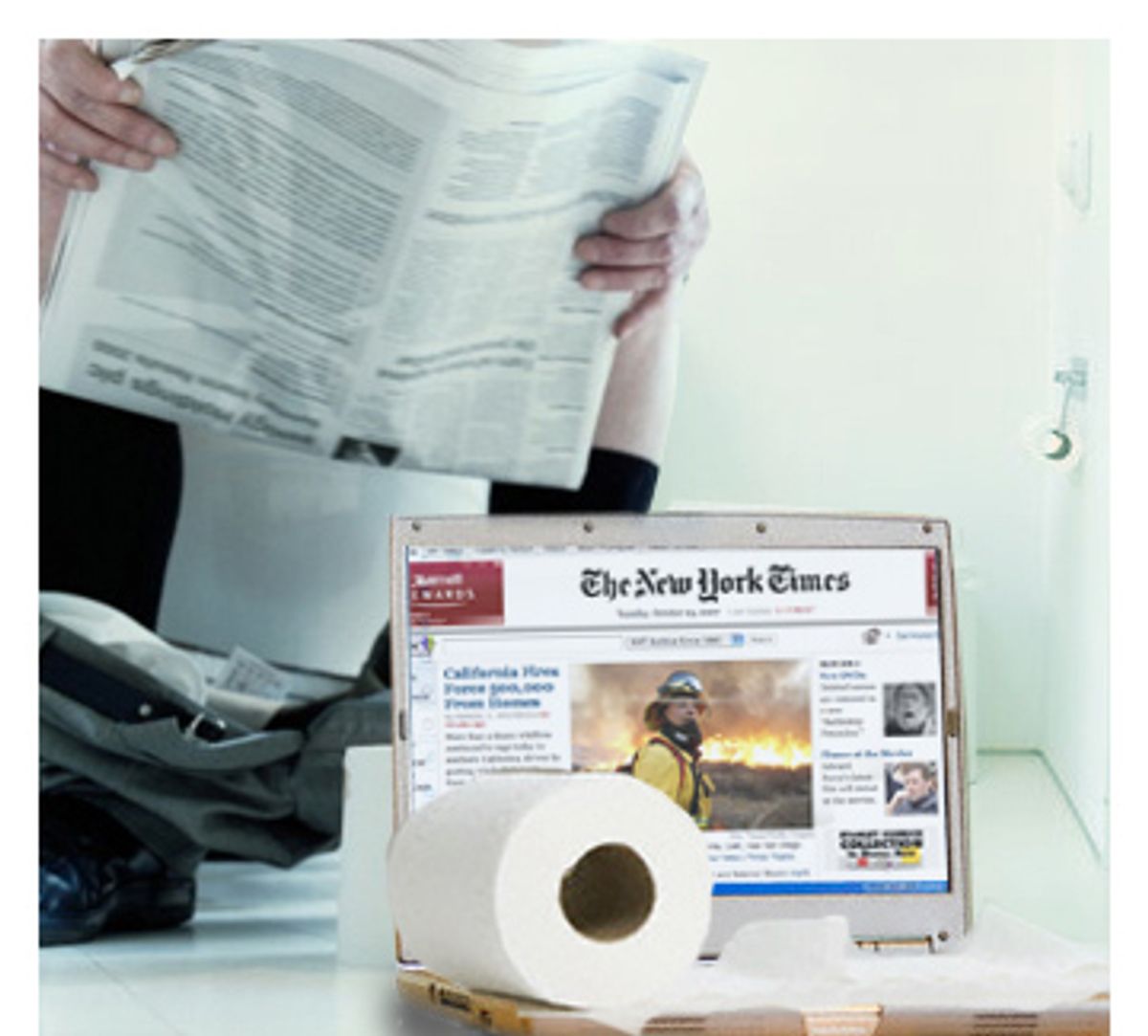 About a year and a half ago, I canceled my daily print subscription to the New York Times. My decision was economic -- $665 a year buys a lot of handcrafted organic farmstead cheese -- as well as occupational (working from home eliminated a newspaper-consuming morning commute). But also, the moment seemed ripe. Though I work on the Web and get my music, movies and TV in techy ways that weren't possible a decade ago, the old-fashioned print newspaper has long been, for me, a matchless vehicle for the news. It's portable, easy to use, highly functional, and it comes to you every morning without complaint, like the sun.

But in the spring of 2006 the Times redesigned its Web site, dramatically improving navigation to stories beyond the front page. Considering that I'd been reading half the day's paper there for at least five years anyway, the redesign was just the nudge I needed to go digital-only. (I was not the only one.)

Living paper-free has worked out well enough. My wallet is heavier and my recycling load lighter, and I'm delighted at the Times' and other newspapers' constant efforts to improve their Web sites (e.g., killing TimesSelect, adding videos like these by Mark Bittman and David Pogue, and building interactive graphics like this one on the Virginia Tech shooting).

But I still miss newsprint. Though I will never go back, more and more, these days, I find myself longing for the paper and the unique, perhaps irreplaceable role it played in shaping how I understood the news of the day.

Consider this column a paean to an antiquated technology, in the manner, say, of an ode to hand-churned butter. Hey, hand-churned butter had a lot going for it, and even today, some folks swear by it. That the stuff was superseded by an economically superior product can't erase its charms.

The same holds for newspapers. Print's ultimate demise is a fate foretold by as many indisputable line graphs as Al Gore wields to prove that Knut and his kin are in trouble. But before it disappears forever, let's pause to remember what's beautiful and useful about the newspaper -- if mainly for the sake of posterity, also to point out what about it we should aim to replicate digitally.

The newspaper, first and chiefly, is easy to skim. Any single day's news is a motley collection of barely related events, many of which even the most wild-eyed news junkie finds quite boring. The newspaper's genius is putting them together in a way that highlights connections and implicit categories, and that shows off enough of each to quickly tell you what you need to know.

It's like a shopping mall of news; you don't have to enter every store to have any fun. Just peering in the windows -- scanning the pictures and captions, passing over the headline and pull-quotes and the lead sentence, noting the story's placement -- can be worthwhile.

Say yesterday brought a new development in the ongoing nuclear disarmament negotiations with North Korea, and you, a sophisticated parser of diplomatic niceties, have a real but not especially deep interest in the story. You'd like to follow the big events but are content to watch the small ones from afar.

The print paper perfectly accommodates such shallow regard for certain stories. As you flip through it, you'll see the piece there on the International page and will be able to quickly glean from its design whether it merits your further attention. Even if you decide it does, you still don't have to read the whole thing to get what you need from it -- just look at the caption and the photograph, or quickly cast your eye over keywords in the first few paragraphs. There, now you know all you need. Next story!

In this way, I can go through the whole front and business section of the Times in about a half-hour, reading a few stories in full, skimming most.

It's well-nigh impossible to pull off the same sort of skimming trick on the Web. On the Times site, stories not big enough to make the front page end up in one of the various inside section pages -- World, U.S., etc. -- as well as in Today's Paper, a long list of every story published that day.

But these collections show just a headline and a short description of each story, and thus aren't nearly as useful as a page of newsprint, where many stories are printed in full. On the Web, in order to determine if a piece is important, you've got to click on it -- and the more clicking you're doing, the less skimming.

Earlier this year, the Poynter Institute, the South Florida journalism think-lab, outfitted more than 600 test subjects with eye-tracking goggles to see what people actually look at when they "read" newspapers and newspaper Web sites.

Poynter found that people who peruse stories on the Web read far more text than do people looking at a print newspaper. On the Web, once a reader has chosen a story, she'll usually stick with it. Poynter found that on average, people read 77 percent of Web stories they've chosen. Readers of broadsheet newspapers were far more fickle. Once they'd picked a story, they would read, on average, 62 percent of it before skipping to something else. (See more on the eye-tracking study here.)

You might argue that reading more of a specific story -- what the online readers were doing -- is better than reading less of it, what the newspaper readers were doing. Don't forget, though, that print readers are skipping around only to other news stories, and thus getting a wider take on the news: They're trading in depth for breadth. And don't forget this, also: Reading the news online in the real world, if not in Poynter's lab, introduces many dangerous avenues to sacrifice both depth and breadth, to leave the paper altogether and go to Wikipedia, e-mail, blogs, Amazon and beyond.

Mostly that's OK. Even with all those options to procrastinate, the Web guarantees you'll never miss a big story. Wherever you click, these days, people will tell you what to read. With the help of online aggregators like Google News, Techmeme and Digg, as well as of bloggers, Matt Drudge, newspapers' most-popular lists, and helpful e-mailers, you're sure to spot every big story worth your time.

But there's much more to newspapers than big stories. Every day, a paper is chock-full of news that, while kind of interesting, doesn't quite rise to the level of Drudge.

Not long ago I picked up a copy of the Wall Street Journal to take with me on a short plane ride. On Page B6, I saw this little story about the drug company Genentech's efforts to strong-arm sufferers of wet macular degeneration, an eye disease, into use its $2,000-per-month drug rather than its $40-a-month drug. I was fascinated by the story -- and surprised that I'd never heard of it. Later on, I found that the controversy had been bubbling on the business pages of many newspapers for many weeks. It had just never made the front page of any online newspaper I read.

Not all is lost, certainly. The New York Times' Reader software represents a valiant effort to mimic the print newspaper online -- it's worth checking out, but not perfect yet, and not worth its $165-per-year price tag.

The online newspaper is an infant; in time designers and engineers will surely find a way to give us a perfectly skimmable electronic broadsheet. Until then, there's a lot I'll miss -- and mourn.