World Series preview: The Red Sox are better. The Rockies are hotter. Which means more in October? Neither. 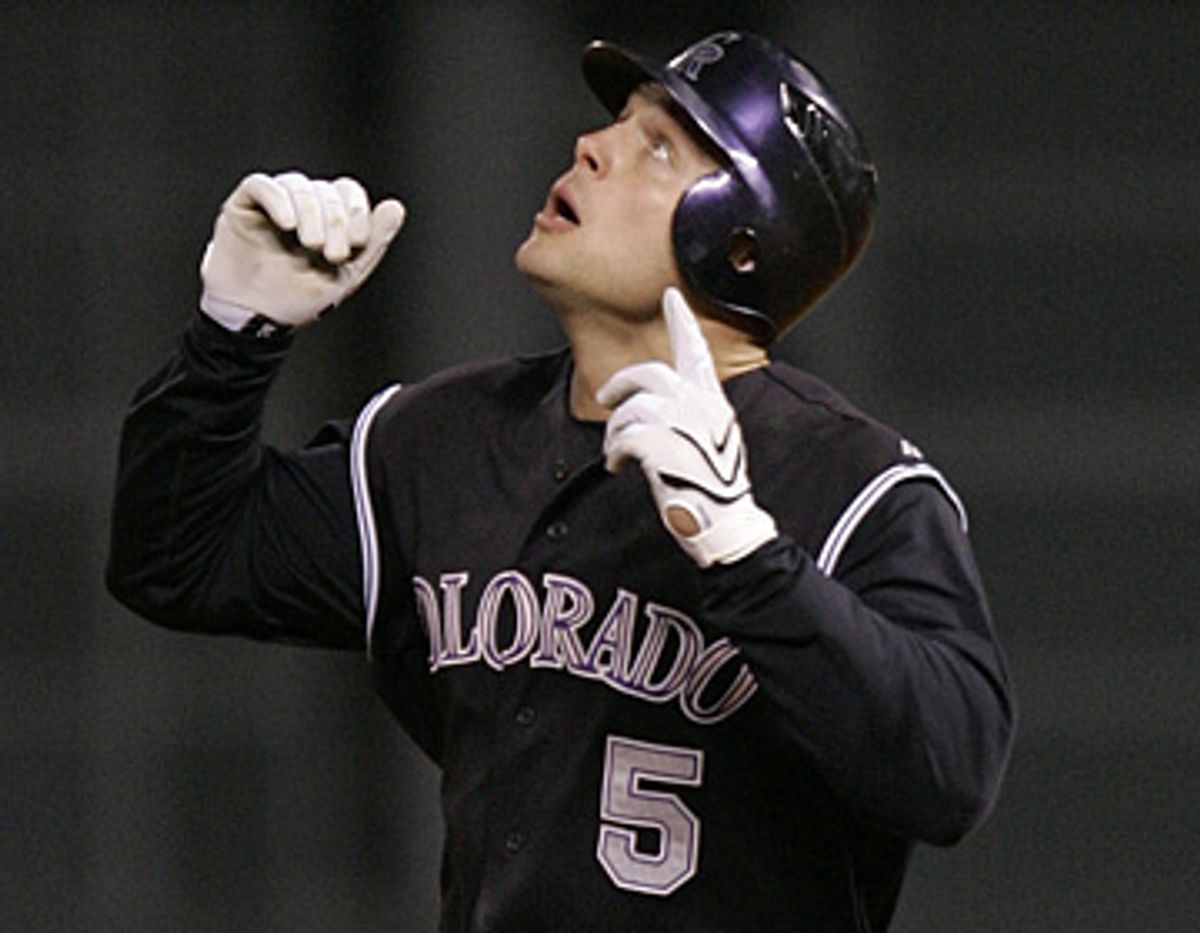 The World Series opens Wednesday night in Fenway Park and on Fox TV with the Boston Red Sox going for their second championship in four years -- also their second in 89 years -- against the Colorado Rockies, who have never been this far in a mere 15 seasons on the planet.

The Rockies are hotter than any team's ever been hot coming into a World Series. They're perfect in seven postseason games, on a 10-game winning streak overall and winners of 21 of their last 22.

But that means nothing.

You're hot until you're not in baseball, and there's no predicting when hot will become not. Every game is a discrete event, with different starting pitchers meaning that today's team might be vastly different from yesterday's.

If momentum meant anything, more teams would go on 21-1 runs more often. Plenty of teams win six or eight or 10 in a row, after all, so momentum ought to keep those streaks going more than once every few decades. The last team to come into the World Series on a run anything like Colorado's was the 1935 Chicago Cubs, who won 21 straight games before losing the last two of the season at St. Louis.

Those games were meaningless, the pennant already having been clinched, but even counting them, the Cubs had won 21 of 23 entering the World Series against the Detroit Tigers. Then they lost Game 1 -- that was the bitter-cold Detroit day that fight manager Joe Jacobs attended his first baseball game and, asked what he thought, uttered the immortal phrase "I shoulda stood in bed" -- and eventually lost the Series in six. So much for momentum.

But here's the thing: Even if there were such a thing as momentum in baseball, even if the Rockies really could count on playing well today just because they played well yesterday, it wouldn't matter because the Rockies didn't play yesterday. Or the day before that. Or the six days before that.

They've been idle for a major-league record eight days. There are pitchers scheduled to start games in this World Series who weren't born when the Rockies eliminated the Arizona Diamondbacks in the National League Championship Series.

The Rockies have been standing still, the very opposite of momentum, while the Red Sox have been reeling off three straight wins over the Cleveland Indians to take the ALCS. Boston isn't Colorado-hot, but the Sox have gone 7-3 in the playoffs, and they only had to sit for two days.

They're also a better team. They're the champions of the stronger league, they have playoff experience and they have the best starting pitcher, the best relief pitcher and the two best hitters in the Series.

So here's the prediction: Rockies in seven.

Don't come looking on Page 2 for the logic behind that pick. This column has been right in exactly one of its six postseason predictions, so at this point it's aspiring to the accuracy of a blind squirrel. There are more Red Sox fans than Rockies fans so picking the Rockies will get me more angry letters. I get lonely sometimes.

This Series will be played in two of the more bizarre ballparks in the major leagues, fields that make things tougher than usual for visitors who aren't accustomed to stopping by. Fenway has the Green Monster and all sorts of corners, crannies and angles. Coors Field in Denver has a monstrous outfield to accommodate how far balls fly in the Mile High City's air.

The quirks of those parks, the raucous, almost college football-like crowds at both and the big lumber both teams swing mean this World Series has a chance to be a thriller, which would be nice because the last three, two sweeps and a five-gamer, haven't been.

How hard is it to be a visitor in Denver and Boston?

In the thin air of home, the Rockies haven't had a losing record in interleague play since 2001, though they've had an overall losing record in each of those years except this one. It's a small sample each year, only nine games, but they add up to a 36-18 record against A.L. visitors in Denver since '02. Visitors often complain of fatigue and shortness of breath, and the different way the ball moves in the thin air takes some getting used to.

Counting the 2004 World Series, the Red Sox are 36-11 against National League teams at Fenway Park since 2003, and until this year, they hadn't even lost a home series against an N.L. team in that stretch.

This wouldn't be baseball if the National League team that took two of three from the Sox this year at Fenway weren't the Colorado Rockies, long before their epochal hot streak. They even hammered Boston ace Josh Beckett in the finale of that June series, handing him his first loss after nine wins.

That aside, Beckett towers over this Series as the one true ace, already among the all-time postseason elite after eight starts in two Octobers. This year he's given up three earned runs in 23 innings while striking out 26 and walking one. The Rockies have no one who can match him. Jeff Francis, who draws the assignment, is a solid starter, not an ace.

The rest of the rotations are more or less a tossup. The Sox have the upside, with Curt Schilling and Daisuke Matsuzaka, both iffy of late, capable of great things and having done it before on big stages. Jon Lester will probably replace the injured Tim Wakefield as the fourth starter.

The Rockies figure to send Ubaldo Jimenez, Josh Fogg and Aaron Cook, with only Jimenez inspiring much confidence, or at least as much confidence as a team can have in a World Series starter with 100 innings of big-league experience. The Rockies actually have kind of a strange amount of faith in Fogg for his habit of throwing the occasional strong game, usually against a weak-hitting team, a situation that will not apply again in 2007.

The Red Sox also have the two best hitters, David Ortiz and Manny Ramirez. But the Ortiz advantage is mitigated by the World Series designated hitter rule, which is that there isn't a D.H. in the National League park, meaning Games 3-5 this year.

Ortiz can play first base but he's a defensive liability, and playing the field for nine innings won't do his injured knee any good and might do it harm. The man he'd replace, Kevin Youkilis, is a good hitter and a solid fielder.

He's also famously patient -- Oakland A's general manager Billy Beane, coveting Youkilis in the amateur draft, referred to him as "the Greek God of Walks" in the bestseller "Moneyball." He forces pitchers to throw a lot of pitches, which wears them down and gives Youkilis' teammates a good look at what the guy on the mound has to offer.

Ramirez, meanwhile, a donkey with the glove who displayed in the ALCS how he approaches adequacy defending Fenway's tiny left field, figures to be more of a liability in Coors' gigantic pasture than he would be anywhere else.

You can be a plenty-good offensive team without anyone as good as David Ortiz or Manny Ramirez, and the Rockies are that. Matt Holliday, a National League MVP candidate, anchors the lineup, with Todd Helton, Brad Hawpe, Garret Atkins and Troy Tulowitzki providing plenty of sock as well. Throw in a designated hitter in Boston -- probably Ryan Spilborghs, mostly -- or take it away from the Sox in Denver, and the Rockies are about as good with the stick as the Red Sox are.

The Red Sox have the big stud closer in the Series too, Jonathan Papelbon, and he teams with Hideki Okajima at the back of a bullpen that was the best in the American League by a third of a run per nine innings. The Rockies have a decent bullpen, middle of the N.L. pack over the course of the year, better than that lately, with Manny Corpas and Brian Fuentes doing fine work at the ends of games.

The Rockies are the better defensive team, for what that's worth. It could be worth a lot if Colorado pitchers are able to induce Boston hitters into double-play grounders to erase some of the many baserunners the Sox figure to have. This column is skeptical of claims that the Rockies are the best defensive team of all time because they set a fielding-percentage record, but they can clearly pick it with style.

Add it all up and the Red Sox should win, which is why the pick here is the Rockies, if you follow.

How can it not be the Rockies? They're hotter than any team's ever been hot coming into a World Series.