Cry "fire" and let loose the dogs of climate change!

Another catastrophe, another opportunity to wage rhetorical global-warming war. 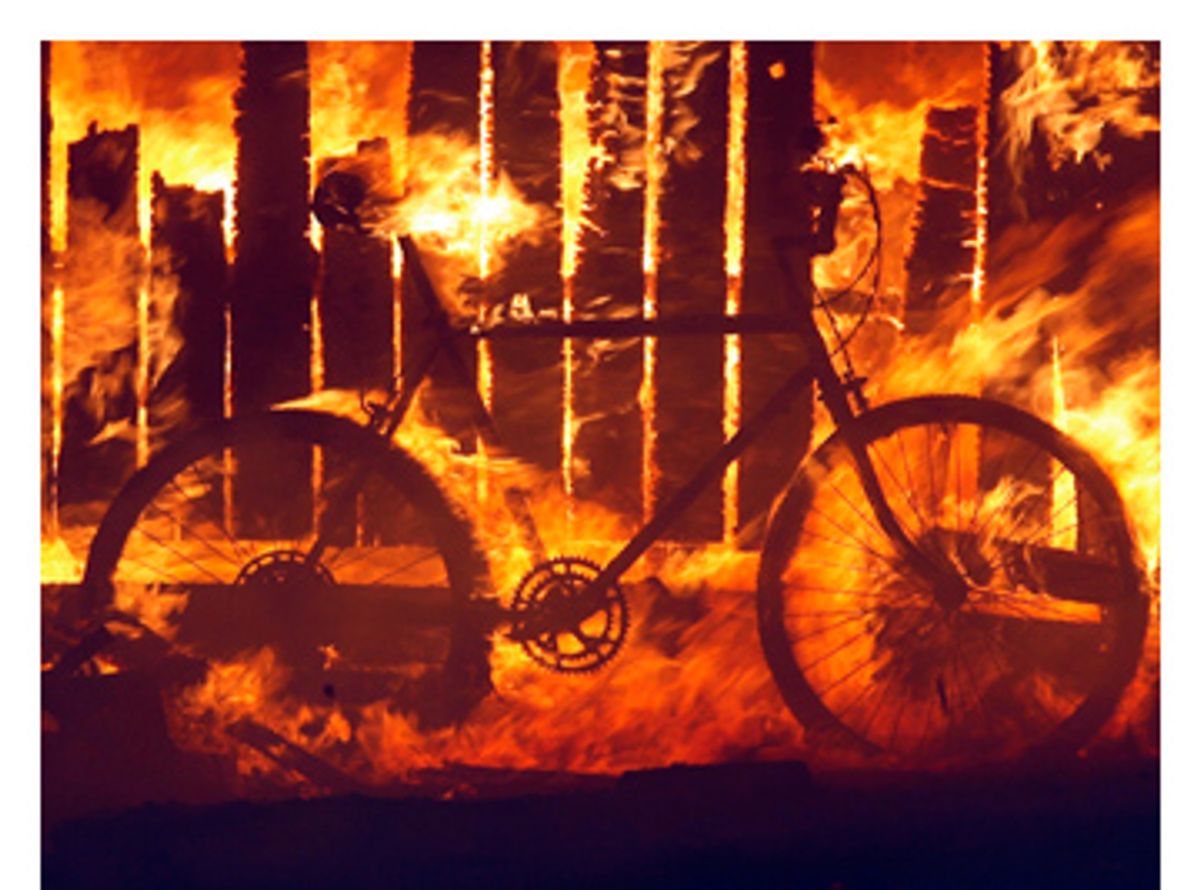 Fire, flood, drought, hurricanes: In a world where climate change is predicted to usher in an era of extreme weather events, the temptation for impatient activists to treat each new unsettling outburst of Mother Nature as proof that the end is no longer nigh, but busting in the door, is irresistible.

For some crusaders, giving in to that sensationalist urge isn't just a guilty pleasure, but a strategic necessity, a way of evening up the rhetorical playing field. For example, writing in Grist, Glenn Hurowitz urges urges environmentalists not to be shy in exploiting the Southern California wildfires. The right wing, he notes, rarely demonstrates any compunctions about taking advantage of disaster to score political points. Case in point: JunkScience.com's Steven Milloy is already asserting that timber-management practices, i.e., restrictions on logging, are to blame for the loss of thousands of homes in Southern California.

(Has Milloy ever visited San Diego? Chaparral scrubland is not exactly a bastion of old-growth redwoods.)

But reviewing the enviro-blogosphere, there is no shortage of environmentalists seizing the wildfire day. Joseph Romm, author of "Hell and High Water," is on the warpath. So are the Center for American Progress and the legal eagles at the Warming Law blog. Bill McKibben is citing the fires as yet another reason to lobby legislators on global warming. Environmentalists are demonstrating few qualms.

Most of them, however, are expressing themselves with nuance, which always muddies the issue. Because if one wants to be a stickler for accuracy, the most definitive one can get is along the lines of what Princeton's Michael Oppenheimer said on NBC Nightly News on Tuesday (as quoted by Romm).

The weather we've seen this fall may or may not be due to the global warming trend, but it's certainly a clear picture of what the future is going to look like if we don't act quickly to cut emissions of the greenhouse gases.

The expert whose name pops up most often when discussing the connection between wildfire and climate change is Anthony Westerling, a professor of geography at U.C. Merced. A summary of his research can be found in a forthcoming chapter of "Climate Change Science and Policy," titled "Climate Change Impacts on Wildfire."

He makes a crucial distinction: Higher temperatures and drier weather, along with less snowmelt and longer summers, increases the possibility of wildfire in heavily forested regions where there has traditionally been more moisture, and the flammability of the fuel is the critical issue in whether or not fires break out. But in traditionally dry regions, an uptick in temperatures is less likely to cause wildfire; instead, an increase in precipitation that results in the abnormal production of fuel is the problem to watch out for.

This is critical to evaluating the Southern California wildfires, because there is a consensus that one of the major problems was the combination of a very wet year in 2004 and reasonably wet year in 2005, which resulted in abundant growth, with the drought conditions of the last year. That combination is not necessarily fallout from climate change. But at the same time, California is experiencing decreasing snowmelt, longer summers and a gradual rise in temperatures, which are putting other regions in the state at risk.

So we end up with a complex message. Westerling:

In dry ecosystems where fire risks are limited by fuel availability, warmer temperatures may not increase fire activity significantly. Warmer temperatures and greater evaporation in some places could actually reduce fire risks over time if the result is reduced growth of grasses and other surface vegetation that provide the continuous fuel cover necessary for large fires to spread. The effect of climate change on precipitation is also a major source of uncertainty for fuel-limited fire regimes. However, in some places these are the same ecosystems where fire suppression and land uses that reduce fire activity in the short run have led to increased fuel loads today as formerly open woodlands have become dense forests, increasing for the immediate future the risk of large, difficult-to-control fires with ecologically severe impacts.

Nuance is a bitch. But the last thing environmentalists need to do is copy Steve Milloy's playbook. The fascinating thing about the way public attitudes about climate change have changed in the last few years is that you can make a very good case that the most important catalyst was the disaster wrought by Hurricane Katrina, even though attributing that particular hurricane to climate change is not something most climatologists would be comfortable doing. But as an illustration of what could become more frequent, Katrina was more than expressive. It was terrifying.