The former mayor says "liberal newspapers" have exaggerated the technique's brutality. Perhaps he should try it himself. 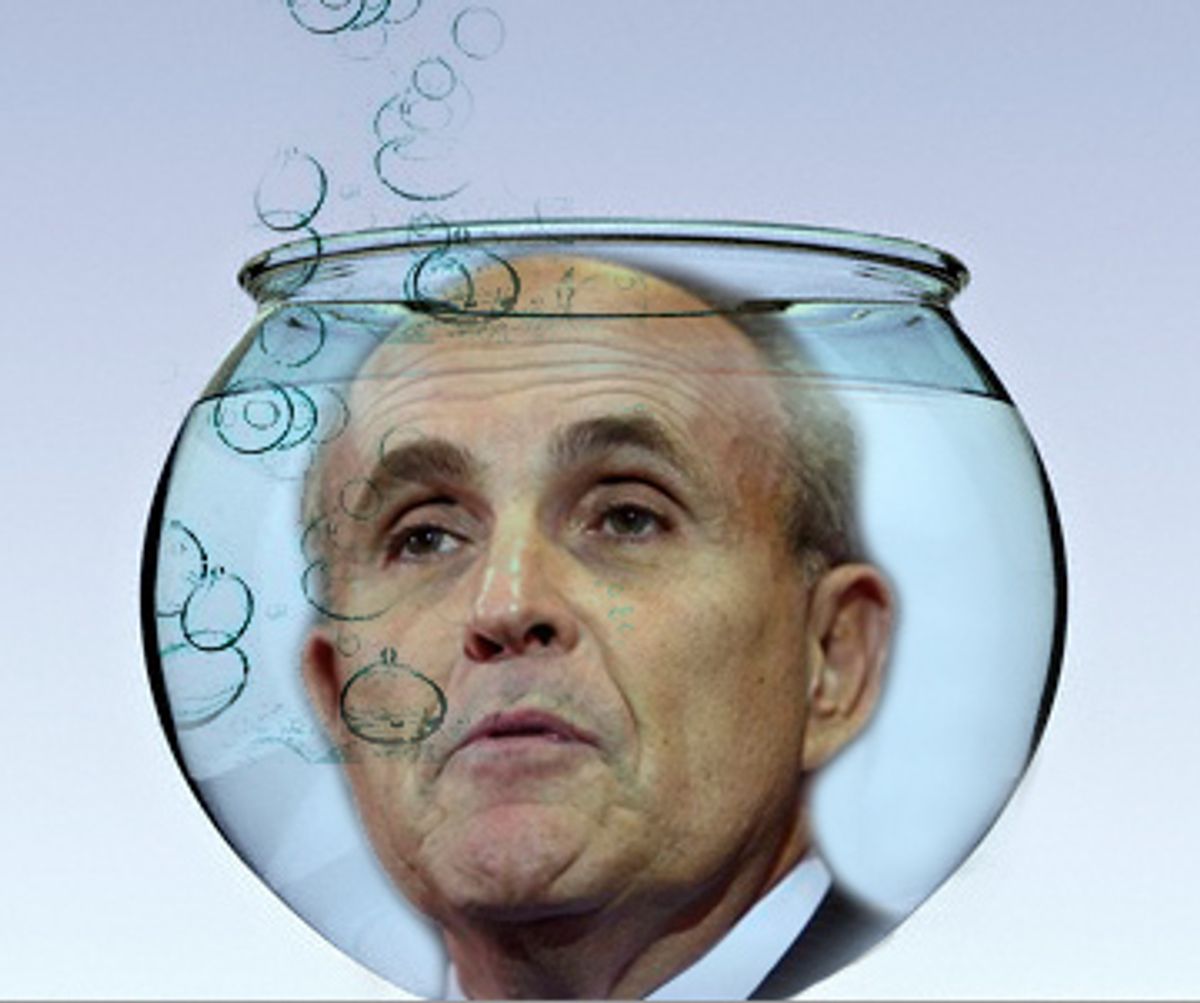 Echoing Michael Mukasey, his friend and associate who likely will soon be the next attorney general, Republican presidential front-runner Rudolph Giuliani claimed Wednesday that he doesn't know whether waterboarding is torture. Having become accustomed long ago to making the most absurd declarations without fear of challenge, Giuliani went further than Mukasey's hesitant demurral.

"I don't know what is involved in the technique," Mukasey replied during his confirmation hearing before the Senate Judiciary Committee, when Sheldon Whitehouse, D-R.I., a former prosecutor, asked whether Mukasey thinks waterboarding constitutes torture and is therefore illegal as well as unconstitutional. Perhaps Mukasey (and Giuliani) should be subjected to the technique for strictly educational purposes so that they will become aware that it involves reclining the victim on a bench or table, covering his face with a cloth and then pouring water over his nose and mouth to make him feel as if he is drowning.

People who have suffered this kind of treatment -- at the hands of Japanese military intelligence officers, for instance -- have described it as horrific. Experts have determined that it can result in permanent physical and psychological damage and can even result in death.

But that very unpleasant experience may or may not be a form of torture, according to the former New York mayor. "I'm not sure it is, either," said Giuliani when asked about Mukasey's dodge at a forum in Iowa. "It depends on how it's done. It depends on the circumstances. It depends on who does it."

Such lazy-minded clichés -- "it depends on the circumstances" -- are emblematic of the moral relativism that swaggering absolutists like Giuliani claim to despise in liberalism. He went on to disparage media coverage of the technique, claiming that "liberal newspapers" have exaggerated its brutality. "So I'd have to see what they really are doing." Perhaps as president, he would attend the interrogations and even pour a few pitchers over the face of a suspect himself.

If tough Rudy does go waterboarding, however, he should have no illusions about its status under American law and tradition. As a former federal prosecutor, he should know that the United States has indicted, convicted and punished a substantial number of torturers whose offenses included waterboarding or, as it used to be known, "the water cure." American prohibitions on the mistreatment of prisoners date back to George Washington, but the earliest prosecution of an American military officer for using that particular technique occurred in 1902, during the U.S. occupation of the Philippines under the presidency of Theodore Roosevelt.

Following a series of Senate hearings led by Massachusetts Republican Henry Cabot Lodge, the Army tried Maj. Edwin Glenn in a court-martial in the Philippine province of Samar for misconduct and breach of discipline, including "infliction of the water cure" on suspected Filipino insurgents. The Army's judge advocate general rejected Glenn's defense of "military necessity," and he was suspended from his post for a month and fined $50 (not an insignificant sum in 1902). President Roosevelt affirmed the major's conviction.

More severe punishments were meted out to the Japanese imperial officers who inflicted the water cure on Allied military officers and civilians during World War II in such places as Korea, the Philippines and China. In war crimes trials overseen by Gen. Douglas MacArthur, the supreme commander in the Pacific and a great Republican hero, testimony about water torture led to numerous convictions -- and sentences that ranged from years of imprisonment at hard labor to death by hanging. As head of the International Military Tribunal for the Far East, MacArthur voted to uphold those convictions and sentences.

Just so there can be no mistake about what the Japanese perps were convicted of doing, here is a sliver of the copious testimony that can be found at Law of War, where an excellent essay on waterboarding and American law can be found. It comes from the trial in Manila of Sgt. Maj. Chinsaku Yuki, a Japanese military intelligence officer. The witness is Ramon Lavarro, a Filipino lawyer suspected by the Japanese of providing assistance to resistance forces. "I was ordered to lay on a bench and Yuki tied my feet, hands and neck to that bench lying with my face upward," Lavarro testified. "After I was tied to the bench Yuki placed some cloth on my face and then with water from the faucet they poured on me until I became unconscious. He repeated that four or five times."

Such testimonies all sound very much the same because waterboarding is a simple practice that even Giuliani should be able to comprehend. When he argues that it is an act whose significance depends on who does it and under what circumstances, does he mean to suggest that the Japanese war criminals were wrong, but the CIA is right? Does he think that laws and treaties apply only to foreigners and not to Americans? Or that the president can abrogate those laws and treaties at will? That is a formula for tyranny -- and it was rejected by Republicans and Democrats alike, all much better men than he.