Which Republican candidate is m

In Iowa, McCain, Thompson and Giuliani vie for the title of Most Manly, in styles that range from low-key to aw-shucks to making glib jokes about torture. 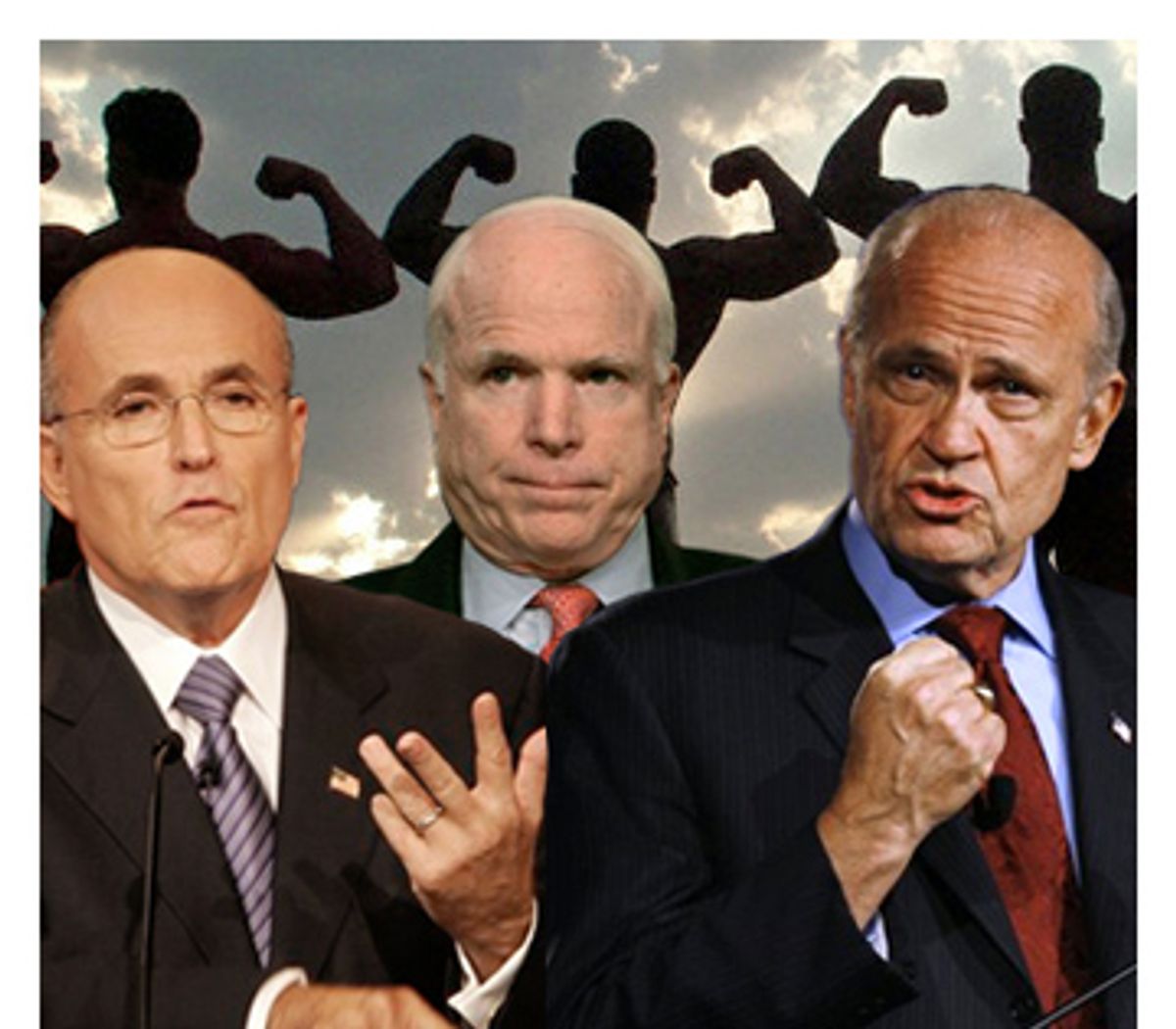 They have each faced down cancer, hired divorce lawyers, endured thinning hair as they reached the qualifying age for Social Security and compiled unorthodox résumés for big-time candidates. Rudy Giuliani, John McCain and Fred Thompson are the "macho men" (yes, the quote marks are ironic) of the Republican presidential race, and their contrasting brands of political masculinity were on display in Iowa late last week.

Presidential politics, for all the high-minded public concern about issues, is as much about emotion as it is about rational thinking. Symbolism matters, which is why Giuliani's "America's Mayor" 9/11 acclaim, McCain's agonies as a Vietnam POW and Thompson's post-Senate acting career on "Law and Order" are political virtues that could prove the difference in the still impossible-to-handicap Jan. 3 Iowa GOP caucuses.

Mitt Romney and Mike Huckabee may transcend this Mr. Universe competition through sheer determination as the two major candidates who have invested the most time in Iowa. But both former governors lack the star power to compete in the macho-man bake-off, unless you count as charisma a full head of dark hair and a disciplined MBA-style campaign (Romney) or a puckish sense of humor and a background as a Baptist minister (Huckabee).

With most campaigns guessing that fewer than 100,000 Republicans will turn out on a cold Thursday night for the caucuses, there is an opening for the three "macho" candidates who skipped the August Iowa Straw Poll won by Romney. In theory, Giuliani with his sidewalks-of-New-York tolerance for abortion and gays and McCain with his support for immigration reform and his long-standing opposition to ethanol subsidies are not natural Iowa candidates. Republicans in these parts tend to be social conservatives or old-school GOP loyalists, small-town insurance agents and hardware-store owners.

But Jim and Deborah Wheeler are the kind of middle-aged Rudy rooters who illustrate Giuliani's surprising appeal among otherwise conventionally conservative voters. "I think we need some backbone in the White House," explained Jim Wheeler, who works in dry-wall construction, as he and his wife waited for a late-arriving Giuliani Wednesday night at the Starlite Ballroom in Davenport. He went on to say, "Issues are No. 1 for me," while stressing that taking a militant line against illegal immigration (not Giuliani's strong suit) is imperative.

Deborah Wheeler was even more of a portrait in cognitive dissonance as she grappled with the mismatch between her firmly held views and the Giuliani record. Deborah, who works as a receptionist in an insurance agency, insisted, "As a woman, I'm tremendously against abortion." But when I started to point out that the former New York mayor supports abortion rights, she broke in to say, "Rudy is for more adoptions. He knows that we can't solve the problem by being hardcore." We went through the same routine when I turned the topic to Giuliani's three marriages. "Rudy has made mistakes -- and he's owned up to them," said Wheeler. "And as a rule, I am not a very forgiving person."

When Giuliani arrived an hour late (air traffic delays out of New York) for only his second appearance in Iowa in two months, he quickly displayed his trademark Three-Button Macho. Unlike other candidates, he did not make even the most minor concessions to Iowa-style informality, addressing the crowd of 250 without unbuttoning his dark suit or loosening his red tie or the collar of his crisp white shirt. While he would periodically flash a toothy smile and sometimes crack jokes, what Giuliani was peddling was not warmth -- and certainly not accessibility -- but his own aggressive brand of self-confidence. The Iowa version of Giuliani (more strident than the nuanced style he employs in New Hampshire, where independents can vote in the GOP primary) went out of his way to blame everything except the Yankees' quick exit from the baseball playoffs on the "liberal media." In a typical applause line that won him whoops of delight, Giuliani declared, "If I can't figure out that there is a significant media bias against this war, I shouldn't be running for president."

I had interviewed the Wheelers before Giuliani made his now infamous claim that, because of inaccurate reports in the "liberal media," he was not sure whether waterboarding was torture, saying, "It depends on how it's done." (Presumably there is a difference in Rudy's mind between "smiley-faced waterboarding" and "frowny-faced waterboarding"). As part of the same rambling six-minute answer, Giuliani also joked about sleep deprivation being defined as torture by, yes, the "liberal media." As he put it with breathtaking narcissism, "They're talking about sleep deprivation. On that theory, I'm getting tortured running for president." That sleep-deprivation line got the loudest laugh of the evening from the crowd, who had nodded approvingly but did not applaud during Giuliani's discourse on waterboarding.

John McCain is a man who knows something about both being tortured and the agonies and the occasional ecstasy of running for president. Accompanied by 82-year-old Iowa native Col. Bud Day, a Congressional Medal of Honor recipient and a fellow ex-POW, McCain spent Friday -- the 40th anniversary of the day he was shot down over Vietnam -- campaigning in northwestern Iowa. After a town meeting in Rock Rapids, I asked McCain -- the only major Republican candidate to serve in Vietnam -- why Republicans like Giuliani seem so cavalier about waterboarding and other forms of torture.

"It's just inexperience. They haven't served and they don't know what the process is," the 71-year-old McCain replied in a soft, world-weary voice. "They don't understand the damage that's done to America. And they really have no conception of how important it is to military leaders because if our men and women are held captive, then the same thing will be done to them. It's a commentary on who should be commander in chief."

Earlier in the day, dressed in an unbuttoned blue blazer, the Arizona senator stood with his eyes looking down and a small smile on his face as Day retold the story of an emaciated McCain, "basically on the verge of death," being thrown into the colonel's cell right after capture and then regaining his health as "John began to get that great soup and 800 calories a day." McCain -- who during the early phases of his 2000 race for president would only allude in passing to his POW experience -- now is willing to use it as a calling card in his bid for the nomination.

But McCain's style remains Low-Key Macho. Asked by an Iowa television reporter to reflect on the 40th anniversary of his capture, McCain first paid tribute to Day ("Under his leadership, I was able to do things I wouldn't have been able to do") and then added, "Most importantly, both of us [in prison] were privileged to observe a thousand acts of courage, compassion and love."

Introducing McCain in Sioux City, Barb Vakulskas, a former GOP county chairwoman, used a surprising set of adjectives to describe an unabashedly pro-war Republican candidate for president. "What I like about him is his softness. He's kind and warm." Afterward, when I asked her to explain that word -- "softness" -- she said, "What made him different from all the other candidates I've seen over the years is that he actually listened to me."

Fred Thompson's Iowa appearance was more of a cameo: a 15-minute speech Saturday night here in Des Moines to 600 GOP faithful at an Iowa Republican Party fundraising dinner. While the speech was more forcefully delivered than other recent Thompson appearances, it was also a vintage example of his Hound Dog Macho. The slow-talking, 6-foot-5, late-starting candidate hulked over the lectern and began with this self-deprecating riff, "All of you men out there enjoying a full head of hair -- enjoy it while you can."

There was little memorable in the address that followed, since the occasion and the candidate's spot on the bottom of the program did not invite programmatic specifics. The Des Moines Register only quoted Thompson's attempt to ballyhoo his right-from-the-start credentials: "I was a conservative yesterday, my friends. I am a conservative today. And I will be a conservative tomorrow."

Watching Thompson Saturday night, I realized how old-fashioned his podium style and his mannerisms are as a candidate. He sounded like a long-ago Southern senator from Central Casting (say, Charles Laughton as Sen. Seabright Cooley in "Advise and Consent") when he drawled, "I want to take a couple of minutes and open up my heart to you and tell you my innermost thoughts and beliefs about the welfare of our country." The corny phrases and the molasses-tinged timing all served as a reminder of Thompson's Watergate Committee service, when the young Republican counsel spent a year watching North Carolina's Sam Ervin win national renown with his just-a-country-lawyer routine.

Thompson is a work in progress, a candidate who has yet to test his theoretical appeal through sustained personal campaigning. Yet folksy Fred is not really the I'm-entitled-to the-White-House caricature created by Darrell Hammond on "Saturday Night Live," just two hours after the real Thompson spoke in Des Moines. "I'm Fred Thompson," Hammond declared in a mock video. "How about a round of applause, people? What, your hands are broken?" Still, Thompson, both through his physique and his Southern Bourbon style, represents a new style of machismo. As does McCain, the soft-spoken war hero, and Giuliani, the blustery 9/11 mayor.

It was Barry Goldwater, the patriarch of the conservative movement, who promised voters in 1964 "a choice not an echo." That is certainly the case with Iowa Republicans this year, who will get to choose from among every macho style this side of the sweat-stained jock and the bleached-blond beach boy.