Another election fiasco in Florida?

The Democratic Party is doing battle -- with itself -- over the state's role in the primaries. Some members say it could cost the party in November 2008. 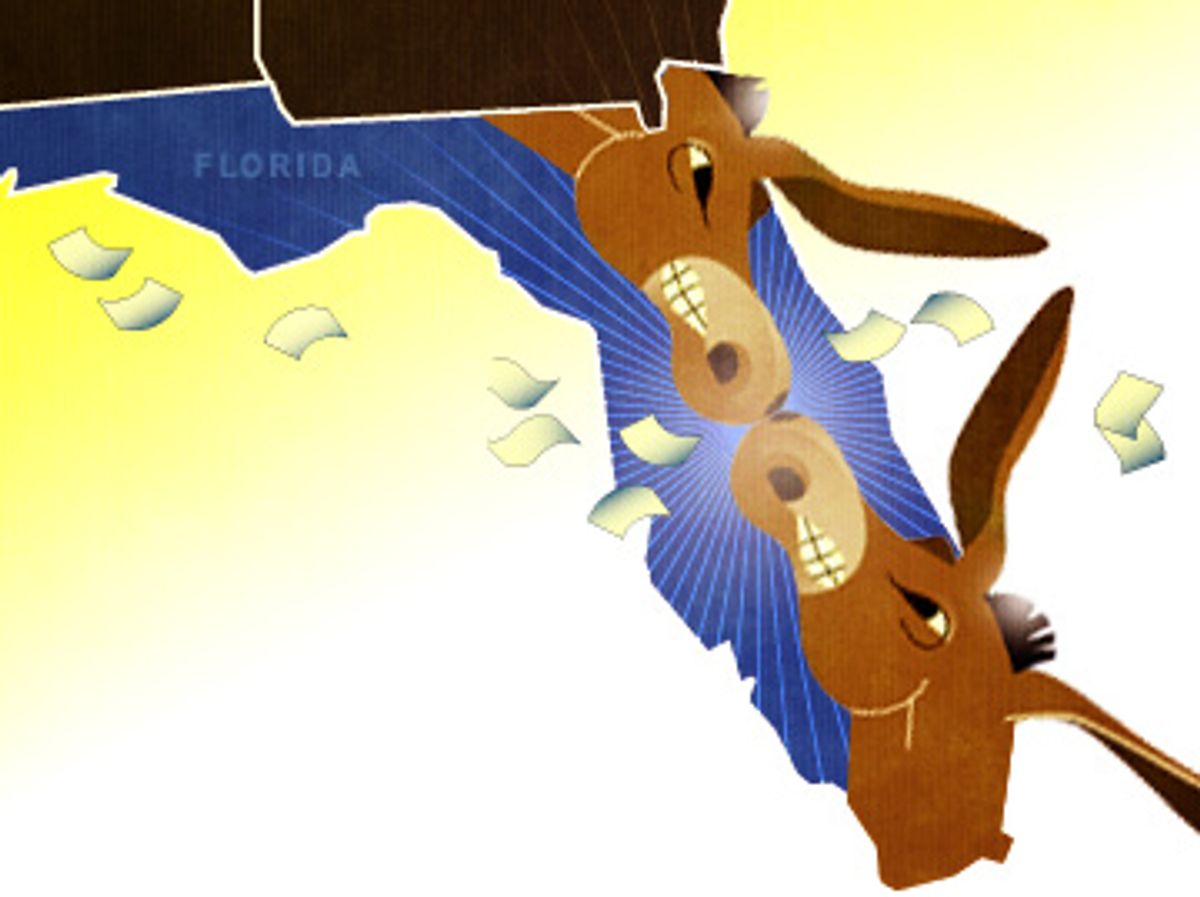 Amid the swimming pools and shuffleboards, a new sense of outrage is buzzing through condo land. Democratic activist Adele Berger began to hear about it at her regular, eight-deck rummy game in Century Village, an expansive, historically Jewish community of New York retirees. "People have been coming over and asking me, 'What's going on, Adele? What's the purpose of voting if it won't be counted?' And that's sad, that's sad."

The head of the community's Democratic club, Sophie Bock, is hearing the same thing, forcing her to reassure residents in the monthly newsletter that their presidential primary vote will count -- at least symbolically. "I am trying to make nicey-nicey, because I can't stand it when the people say, 'I don't want to vote. My vote won't be counted.'" Privately, however, she is as angry as her club members, so angry that she has even begun deleting fundraising e-mails from Howard Dean and the Democratic National Committee before reading them.

"We have been screwed so many times," says Berger, sitting at her kitchen table late last week, before a spread of moist marble cake and sugar cookies.

"Oh yes, they are screwing us again," says Bock, who wears a purple beret decorated with fabric flowers.

Such is the mood these days in Florida, where the specter of election meddling is again rearing its head. National Democrats plan to deny the state's 4.25 million registered Democrats any delegates to the 2008 National Convention as punishment for the state Legislature's decision to move the primary date to Jan. 29, one week earlier than the party rules allow, in an effort to make the Florida vote more influential. At the same time, the political leaders in four early primary states -- Iowa, New Hampshire, Nevada and South Carolina -- have bullied the major Democratic candidates to forgo campaigning in Florida until February, effectively prohibiting voters like Bock and Berger from meeting their candidates, receiving campaign mail or even seeing a candidate advertisement on TV. "We can listen to their debates," says Bock. "But, you know, sometimes if it interferes with a card came, someone is going to play cards."

In any other state, this sort of intra-party fight might seem like little more than an inconvenience. But messing with the vote in southeast Florida is a bit like lighting a fire under a burn victim's home. The retirement communities of Broward County form the core of the state party's strength, with some of the highest Democratic margins in the nation. There are nearly 460,000 Democratic voters in the county, or about three-quarters of the total number in the entire state of Iowa. Broward County was ground zero for the Bush v. Gore presidential recount, the sight of courtroom shout-fests, dimpled chads and, finally, anguished disillusionment. In 2006, electronic voting machines in a Florida district across state failed to record a vote for Congress from 18,000 voters, a glitch that may have been due to voting machine malfunction or poor ballot design. But there was no way to investigate since the machines left no paper trail. "We're always so troubled," says Berger.

Although the latest trouble is stirring around the upcoming primaries, its consequences may extend beyond. No one knows if the anger will entirely fade in the Century Village card rooms in time for November 2008. "There is no question whatsoever but that there will be damage in the general election" from a declined turnout, said Democrat Steven Geller, a state senator from Broward County. The question, he says, is "how significant the damage will be."

A grass-roots backlash has already begun. From the poolside chairs of Broward, the national party's effort to conserve the power of the early voting states does not matter much -- no one cares that retail campaigning is cheaper in Iowa and New Hampshire, allowing for a competitive nominating process less dependent on big-market media buys. In the last few weeks, at least three local Democrats have told Barbara Effman, the chair of the largest Broward Democratic club, that they are leaving the party in protest to become independents. "It's all they are talking about," Effman said of her members. "These are the people that have just been so active in politics all their life."

The most visible Democratic candidate in Florida is former Alaska Sen. Mike Gravel, who appeared last weekend at a state convention in Orlando. The other candidates have no state offices, no direct mail operations and no local press operations. Barack Obama, who travels regularly to Florida for private fundraisers, will not even stop to chat with people on the street, lest he be accused of campaigning in public. Two weeks ago, a reporter for the St. Petersburg Times was denied a chance to speak with Hillary Clinton in New Hampshire, because he carried the scarlet letter of his home state. "You're still from Florida," the spokeswoman told him. "A tiger can't change its stripes." Last week when Bill Clinton came to south Florida to host a fundraiser for 2,000 people in Miami, the Miami Herald had to contribute a $50 fundraising ticket to witness his only appearance in the state.

Rather than just absorb the blow, Florida's Democratic politicians are trying to fight back, though the courts have long given political parties significant leeway in setting their own rules. Sen. Bill Nelson and Rep. Alcee Hastings have filed a civil lawsuit against Dean, the current head of the DNC, alleging among other things a violation of the Voting Rights Act, since about 80 percent of the state's black voters are Democrats. For his part, Geller has prepared yet another lawsuit accusing party leaders in the four approved early voting states of conspiracy and tortuous interference for forcing the candidates not to campaign in Florida.

The damage could be exacerbated at the hands of the opposing party. While Democrats ignore the state, save for the occasional fundraiser, Republican candidates have been traveling down here at a furious clip, with at least two of the campaigns pinning their nomination strategy on the state. That means that Floridians can expect to be bombarded with Republican television and radio spots for much of January, when the Democrats will be silent. And the state Republican Party has already moved to exploit the turmoil on the other side, running Internet spots highlighting the fact that Democratic candidates have raised $10 million in Florida but won't meet with voters.

Geller considers the current situation outrageous. "The anger out there is palpable," he tells me at his stucco and glass-brick law office in Hollywood, Fla. "I have not seen anger like this since 2000. But in 2000 the anger was from the Democrats at the Republicans. This time it's from Democrats at other Democrats."

To hear the DNC tell it, however, the fault for the current imbroglio lies with Geller and his fellow Democrats in the Legislature. For months, the party has threatened to punish any state that unilaterally tried to move its primary date before Feb. 5. Under party rules, the punishment, which is also likely to be imposed on Michigan, can only be carried out if state Democrats were complicit in the change. The Florida effort to move the date was sponsored by a Democrat, state Sen. Jeremy Ring, also of Broward, who remains unapologetic about his role. "I think we have successfully blown up this antiquated primary process," he said in a phone interview last week. "I have absolutely no regrets."

But the date change could also impact the state of Florida for years to come, by affecting the vote on other issues. The Legislature is on the verge of putting a constitutional tax-cut amendment on the January ballot, which would deny the state an estimated $12.4 billion in revenue over five years. Analysts say that if Democrats stay home on primary day, the amendment is far more likely to pass. "The actions of the DNC and the four states are likely to have devastating impact on education in the state of Florida, on the municipal unions, police, fire, general employees," says Geller, adding derisively, "They are really going to love that."

Not all Florida Democrats take such a dark view of the matter. "People feel that this is a family squabble," says Mitch Ceasar, the chairman of the Broward Democratic Party, who keeps a copy of the famous 2000 "butterfly ballot" from Palm Beach on display in his office. "My feeling is that it will prove to be a blip on the political radar screen." Before the convention, Ceasar and others expect the Democratic nominee, who will likely be known this spring, to retroactively award delegates to Florida. That will give the state representation at the convention, even though state voters will have no role in deciding the victor. In the meantime, the state party has launched a "Make It Count" campaign, urging Florida Democrats to vote in January, as if the election was anything more than a symbolic contest.

Back at Century Village, a whistle-stop along what remains of the Borscht Belt entertainment circuit, Berger and Bock are eager to carry this flag, even though they privately feel slighted. In a normal election, Berger says, she will organize about 50 volunteers to spread out through Century Village's four-story buildings and card rooms, where the game of choice is a complex betting contest called Pan, which is played for money. Bock would motivate the more than 150 members of her club.

Both are energetic women who learned long ago that life's obstacles are not a reason to back down. "We just have to go along," said Bock, her Brooklyn accent unfaded. "This is the way it is. We have to make the best of it. We have to go ahead and get out the vote." And so they will. The endurance and determination of the rest of Florida's Democratic voters, however, are in far more doubt.