The Democratic duel of the race

The debate in Philly: Edwards and Biden come out swinging, Obama sticks to smooth jazz, and Clinton stands tall but then stumbles. 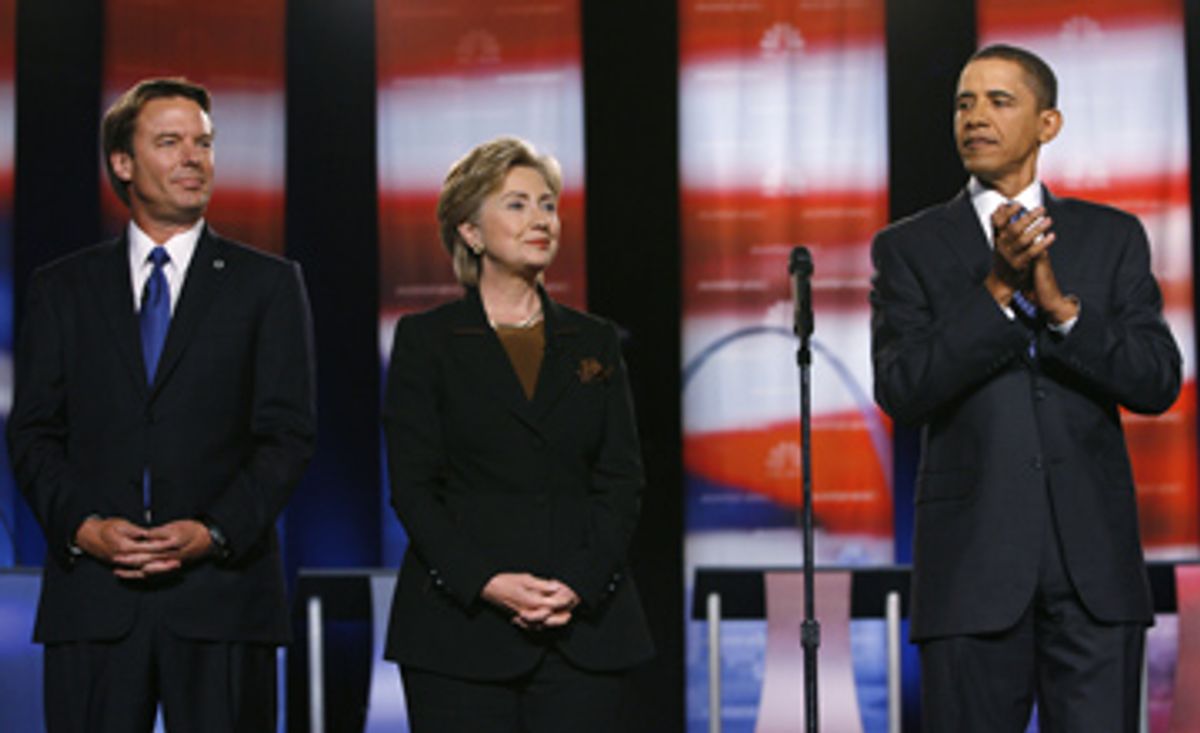 Memo to Democratic voters: If you missed Tuesday night's debate on MSNBC -- the most explosive event of this endless pre-primary season -- troll through YouTube, throw yourself on the mercy of friends with TiVo, stalk the network's Web site. Do anything to watch the first hour plus the last 10 minutes of this fandango in Philly, this duel at Drexel, this Democratic donnybrook that may well define the race. (Watch the debate here.)

The tag-team questioning of Brian Williams and Tim Russert yielded not only heat (perhaps inevitable as we reach the highly combustible point in the campaign calendar) but also light. Not only crystal-clear interludes (Joe Biden's epic putdown of Rudy Giuliani: "There are only three things he mentions in a sentence: a noun and a verb and 9/11") but also enlightening moments that illuminated the choices facing Democrats.

Before the debate, the evening was ballyhooed as Barack Obama's breakout night -- the point in the campaign when the fledgling Illinois senator would finally display his mettle by aggressively challenging Hillary Clinton. Obama telegraphed his punches in advance, promising the New York Times in an interview, "Now's the time for us to make these distinctions clear."

Instead, Obama could not even muster the gumption to lob a rhetorical coconut cream pie in Clinton's direction. He set the tone for the evening in the first seconds of the debate when, challenged to repeat his recent critiques of Clinton, he said soothingly, "Well, first of all, I think some of this stuff gets off-hyped" before lapsing into a labored (and obviously rehearsed) Rocky versus Apollo Creed analogy.

Later in the evening, Obama extended this turn-the-other-cheek magnanimity to none other than Mitt Romney, who had referred to him as "Osama" twice in a single day. Rather than charging, as many assume, that Romney's verbal slips were not accidental, Obama instead claimed, "I don't pay much attention to what Mitt Romney has to say." This was his way of setting up a mild joke. "At least what he says this week. It may be different next week."

This is Obama's smooth-jazz style, and his supporters should accept that it is not likely to change no matter how much they may crave red-meat rhetoric. Obama's signature line -- delivered after Clinton bobbed and weaved her way through another question without quite answering -- was "Let's broaden the conversation here."

A stranger to politics who had somehow missed the outbreak of "Obama-mania" -- the nearly $80 million he raised, the often rhapsodic press coverage and the huge crowds -- might have assumed from watching Tuesday's debate that the Illinois senator was a minor candidate on the fringes of the action. It seemed as if Clinton's principal antagonists were John Edwards and -- when he was given a chance to speak -- Chris Dodd. The two of them, sometimes joined by Biden, took on the traditional political task of bringing the highflying front-runner back to earth.

This may have been Edwards' best debate, as he displayed the smiling aggressiveness that had eluded him when he was going head-to-head with Dick Cheney as the 2004 vice-presidential nominee. Again and again, Edwards took lines from his stump speech and made them seem fresh as debate responses. Edwards rattled off a litany of Clinton's zigzag comments on topics ranging from Iraq to Iran to Social Security before concluding harshly, "I think the American people ... deserve a president of the United States that they know will tell them the truth."

As Edwards continued banging away with drumbeats of criticism throughout the evening (saying of Clinton's Iran position, "Our responsibility as presidential candidate is to be in 'tell the truth' mode all the time"), the cameras caught Clinton glaring at Edwards with daggers darting from her eyes before turning on a smile when she was asked to respond.

Dodd, who somehow had shed the generic senatorial mannerisms that had dogged him during earlier debates, crisply challenged Clinton's claims to be the Democrat most likely to win back the White House. "Whether it's fair or not fair," the white-haired Connecticut senator declared, "the fact of the matter is that ... there are 50 percent of the American public that say they're not going to vote for her ... I don't necessarily like it, but those are the facts."

Clinton, displaying the hard-won poise of a public figure who has been in the crosshairs for 16 years, seemed unflappably resigned to her assigned role as the evening's piñata. She came out fighting, claiming that the constant GOP attacks are her reward for "standing against the Republicans, George Bush and Dick Cheney." Even though some of her answers seemed consciously baffling in their imprecision, she stuck to her candidate-speak, poll-tested talking points: "I am not going to balance Social Security on the backs of seniors and hardworking middle-class Americans."

Only in the last 10 minutes of the debate, long after it seemed as if she had absorbed the worst without losing her stride, did the New York senator suddenly stumble in the homestretch. Asked if she supported New York Gov. Eliot Spitzer's plan to permit illegal immigrants to apply for driver's licenses, Clinton appeared to express home-state solidarity by declaring, "What Gov. Spitzer is trying to do is fill the vacuum left by the failure of this administration to bring about comprehensive immigration reform." After Dodd, veering right, came out against this proposal, Clinton suddenly interrupted the proceedings to announce, "I just want to add, I did not say that it should be done."

That was the moment when Edwards pounced with the quickness of a trial lawyer who has realized that an opposing lawyer has just made a fatal error that undermines her case. "Unless I missed something," Edwards said with ill-disguised glee, "Senator Clinton said two different things in the course of about two minutes ... America is looking for a president who will say the same thing, who will be consistent, who will be straight with them. Because what we've had for seven years is double talk from Bush and from Cheney." All that was missing was a Marvel comic-book exclamation like "Pow!" or "Whap!"

Presidential debates bring out the drama critic in everyone who watches -- reporters, political partisans and ordinary television viewers. The debates are, after all, a form of performance and it is tempting to grade them for their sheer theatricality. But politics does not work like that -- and individual aesthetic judgments by reporters are subjective interpretations rather than surefire predictions of primary victors.

Little more than nine weeks before the Iowa caucuses about all that can be said with certainty is that the Tuesday night debate was enhanced by giving Mike Gravel and his angry-old-man act the well-deserved hook. Dennis Kucinich stepped into the void with some deft one-liners, particularly after he admitted that, yes, he had once seen a UFO. Joking that he was going to move his campaign headquarters to Roswell, N.M., Kucinich added, "More people in this country have seen UFOs than I think approve of George Bush's presidency."

Mostly, though, what the debate demonstrated is the volatility of the Democratic race. Clinton's caution may still prove galling, despite her political artistry. Obama's blandness could cost him his featured role as the designated giant slayer. Edwards retains the potential to mount a major breakthrough, though his is a high-wire act of smiling and snarling at the same time. Dodd, Biden and even Bill Richardson still have a chance of making this more than a three-candidate contest. And judging from the collective performances Tuesday night, Democratic voters have reason to be uncharacteristically upbeat about their presidential choices -- seven candidates who come across as anything but dwarfs.