Giuliani claims he might not have survived prostate cancer under "socialized medicine," yet he was covered by a government-provided plan. 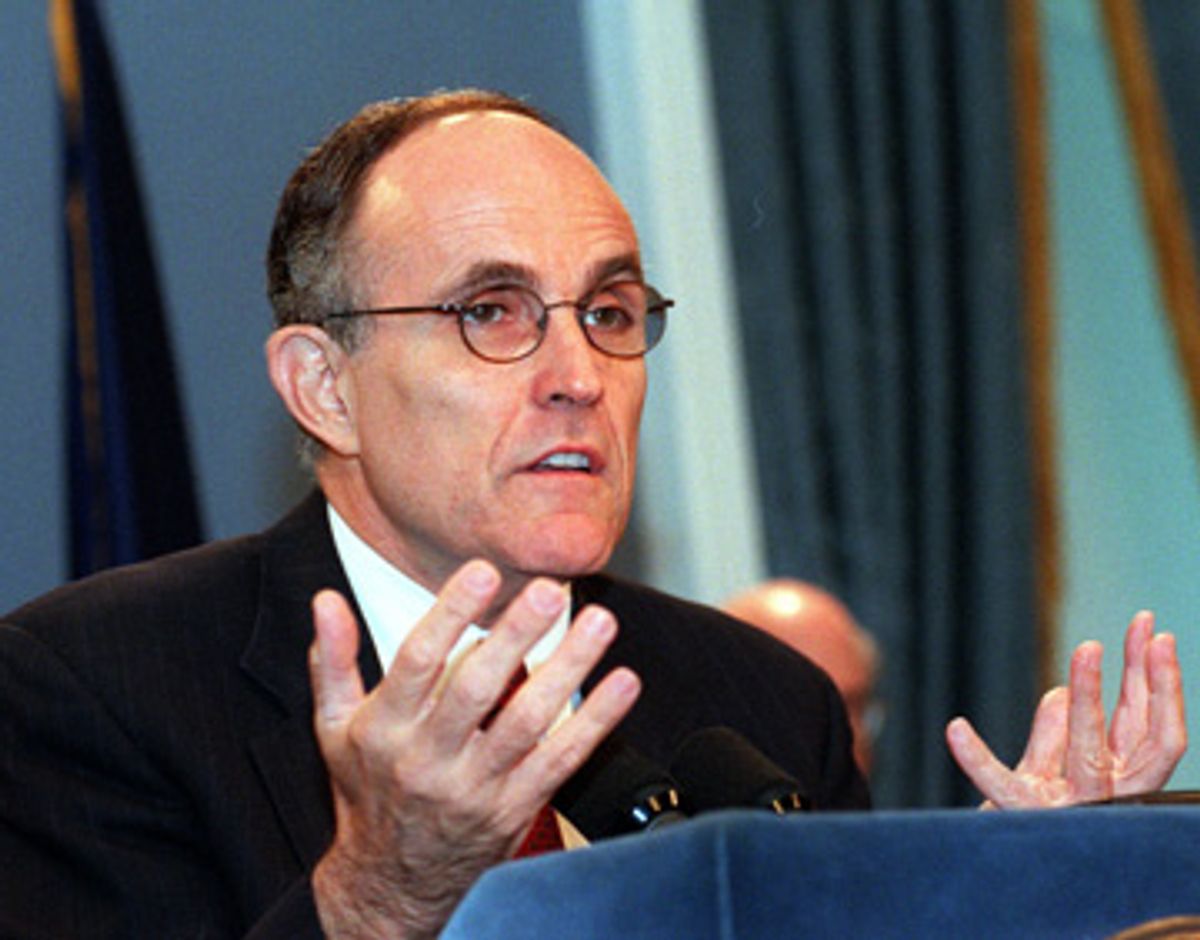 To a politician pandering to his party's right wing, a role that Rudolph Giuliani plays every day now, citing his own recovery from prostate cancer as an argument against "socialized medicine" must have seemed like pure genius. The radio ad that went up this week in New Hampshire suggests that Giuliani not only faced down the 9/11 terrorists -- or something like that -- but triumphed over a terrifying disease as well, without the help of any government bureaucrats.

Yes, it's another inspiring and instructive story -- or would be, perhaps, if only it were true.

The former New York mayor did survive prostate cancer, but otherwise his statistical claims were not difficult to debunk, as reporters for the New York Times, the Washington Post, MSNBC and other news outlets quickly discovered. Giuliani had picked up his numbers from an article in City Journal, a publication of the right-wing Manhattan Institute, and simply repeated them in public without bothering to check their validity. Unfortunately, they were essentially fraudulent figures, extrapolated inaccurately from old data (by a doctor who also advises the Giuliani campaign on healthcare).

Accurate and current data, easily available from public health agencies and medical authorities, shows that the survival rate from prostate cancer in England is better than 74 percent and in the United States is better than 98 percent. Even that difference, as experts explained, probably has nothing to do with the British National Health Service and much to do with the aggressive screening programs employed in this country. (And for the moment, let's merely mention another highly pertinent issue, namely that the great majority of prostate cancers occur in men over 65, which indicates that many if not most are treated successfully under Medicare -- our version of national health insurance for the elderly -- or by the Department of Veterans Affairs, which comes as close to truly socialist healthcare as any system in the world.)

The Giuliani ad's problems go well beyond a pair of phony numbers. Among the blogging wonks scrutinizing the relevant health data is Ezra Klein, who asked a separate but penetrating question: "Wouldn't it be interesting to find out if the gold-standard care Giuliani got during his prostate cancer came while he was on government-provided health insurance?"

As Klein surmised, Giuliani was serving as mayor and participating in a city of New York health plan when his doctor informed him that his prostate biopsy had come up positive. The coverage he enjoyed -- which resembles the Federal Employees Health Benefits Plan -- permits all city employees, from trash haulers and subway clerks up to the mayor himself, to select from a variety of insurance providers, and it is not much different from the reform proposals adopted by his nemesis Hillary Clinton.

In the spring of 2000, when Giuliani learned that he had cancer and abruptly dropped out of the Senate race against Sen. Clinton, he was enrolled as a member of GHI, one of the two gigantic HMO groups that provide care for most city workers (the other is known as HIP). He underwent surgery and radiation at Mount Sinai Hospital, a prestigious institution that participates in the GHI plan, which means that his costs were largely underwritten by city taxpayers.

So does that qualify as "socialized medicine"?

At GHI and HIP, the city government pays the premiums for its hundreds of thousands of enrolled members, of course. On the board of directors of GHI, a nonprofit corporation, sit half a dozen officials from the city's largest unions, including Harry Nespoli, president of the Sanitationmen's Association Local 831, and Roger Toussaint, president of the Transport Workers Union Local 100 (who led a tough, illegal strike against the subway system last year). Among the many state and federal regulations and programs that support the operations of these major insurers is a New York state "risk allocation pool" that cushions the financial impacts of certain kinds of mandated coverage.

If that isn't socialism, it hardly sounds like pure private enterprise, either. While that may startle a boob who accepted the premise of Giuliani's silly commercial, it is hardly surprising to anyone familiar with the pedigree of GHI and HIP, which were among the earliest examples of prepaid healthcare in the United States. Both were originally cooperative enterprises, founded by idealistic progressives whose hope was to make care more affordable for working-class families. (And their earliest supporters notably included Fiorello LaGuardia, a liberal Republican mayor of New York who happened to be of Italian descent.)

Naturally such hopeful initiatives outraged the reactionary ideologues and political mountebanks of that era. Back in 1937, the appearance of Washington's first group health plan for federal employees was denounced in Time magazine as a "blood-curdling new excursion into the practice of medicine" by the government, which surely meant the end of professionalism, declining standards, ruinous expenses and nothing less than the advent of "Soviet medicine."

We've heard it all before, Rudy. And 70 years later, it isn't exactly fresh.