How Oprah ruined the marathon

America's competitive spirit has been wrecked by feel-good amateurs like Oprah whose only goal is to stagger across the finish line. 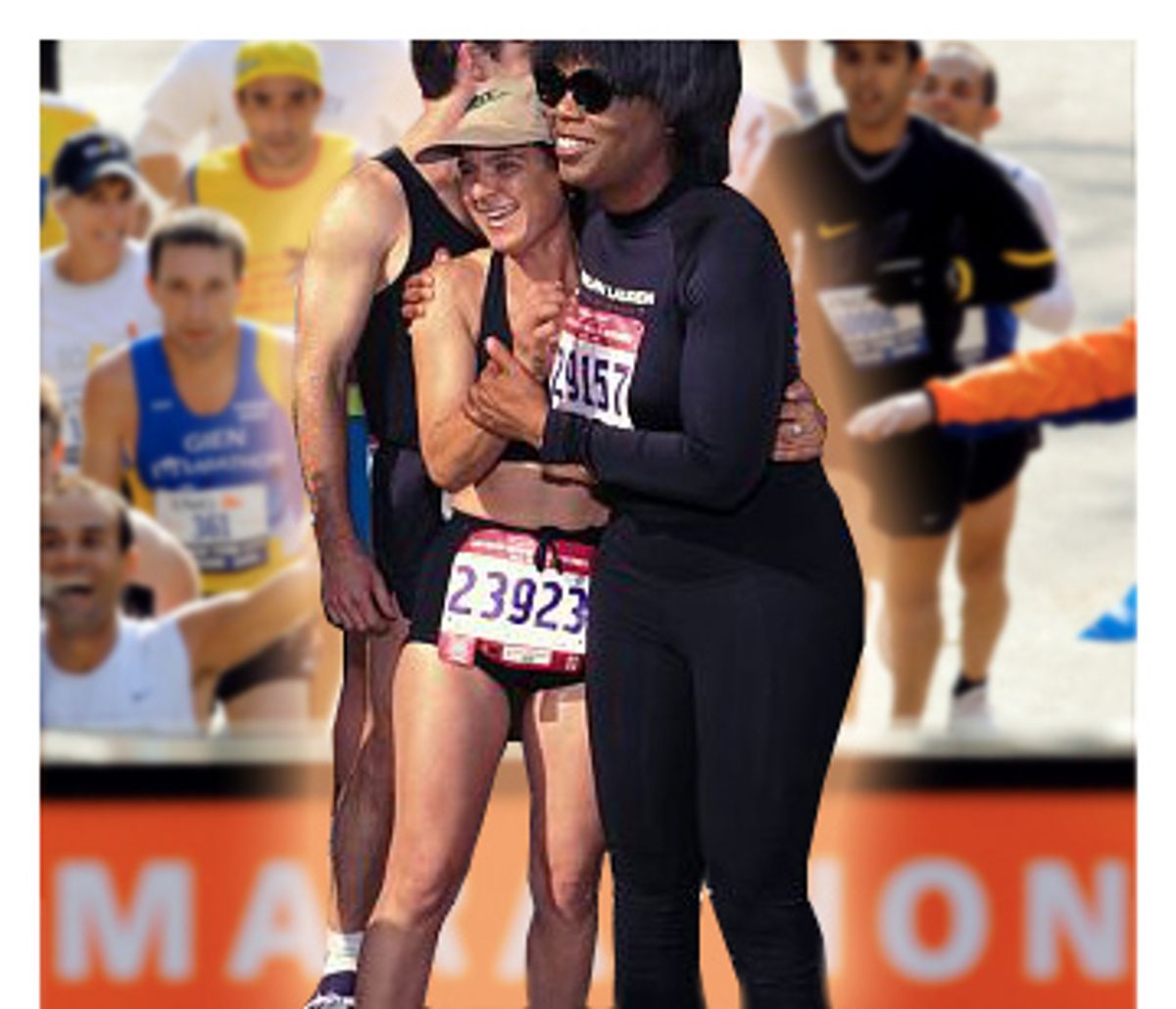 In 1971, the New York City Marathon was no bigger than a grade-school field day. It was the race's second year, and a shivering cult of 245 runners gathered in Central Park to run laps around the walking paths. Paying $2 to enter, they wore cotton T-shirts, drooping socks, and Tiger racing flats, those sneakers now cherished by Brooklyn hipsters. The first-place finisher, a high-school teacher named Norman Higgins, didn't even get gas money back to Connecticut.

Back then, America was more fascinated with competitive chess than with distance running. Yet at the next Olympic marathon, the U.S.'s Frank Shorter won the gold medal, transforming his oddball sport into a fitness mania.

This weekend's marathon will be a lot different from Norman Higgins' race. Now the ING New York Marathon (after its corporate sponsor), it's going to be a cattle call of 37,000 runners, each with far more sophisticated equipment than the pioneers of the 1970s. Today's runners suck gooey energy jolts from plastic tubes. Their $150 shoes are nearly shockproof.

With all these runners, and all this technology, you'd think America would be turning out faster and faster marathoners. Instead, the opposite is happening. The more we run marathons, the slower we get -- an average of 45 minutes slower over the last 25 years. Ryan Hall is the swiftest American-born marathoner ever. His best race isn't in the top 250 of all time.

Hall is running in this weekend's other New York marathon: Saturday's Olympic Trials in Central Park. Don't expect to see him on the victory stand in Beijing, though. Since Shorter retired, only one American man has won a medal in the marathon: Meb Keflezighi, who grew up in Eritrea, where he didn't see a car until he was 10 years old. You can look at this as a triumph of the melting pot, or you can look at it as soft Americans relying on an immigrant to do their arduous running.

It makes me ask: Has this country's marathoning spirit been trampled by hordes of joggers whose only goal is to stagger across the finish line? When I joined my high-school cross-country team, in 1982, American distance running was at its zenith. For the past decade, three Americans -- Shorter, Bill Rodgers and Alberto Salazar -- had dominated the marathon. I idolized Rodgers, the long-haired runner who'd dedicated himself to the sport after quitting smoking and losing his conscientious objector's job as an orderly in a mental hospital. One Patriots' Day, Rodgers showed up at the Boston Marathon wearing a hand-lettered T-shirt and a sweatband -- and set a course record.

To schoolboys who raced three miles, the marathon was a rigorous, forbidding distance -- an extreme sport, like mountaineering. The only marathoner I knew was a friend of my father's. His narrow cheeks were bearded, he owned five pairs of cross-country skis, and he was president of the local Sierra Club. Eventually, running consumed him. He left his family and moved to Jackson, Wyo., where he could live among others of his kind.

The American runners of that era were propelled by a "double wave" of self-abnegating philosophies, theorizes Tom Derderian, who trained with Rodgers and Salazar at the Greater Boston Track Club. They were "heirs both to the warrior mentality of their World War II fathers and the new consciousness of the 60s and 70s," he told author John Brant for the book "Duel in the Sun," an account of the 1982 Boston Marathon, considered the last great American distance race.

After high school, I was a decent recreational runner -- I could break 20 minutes in the 5K -- but somehow, I got it in my mind that I wouldn't be a real runner until I did a marathon. Too lazy, too cocky or too ignorant to do heavy mileage in training, I finished the Chicago Marathon in an ignominious 4 hours and 16 minutes, alternating between cramping and nausea the last four miles. Embarrassed, I resolved to try again, but then a knee problem limited my runs to 10 miles.

I had to give up marathoning just as everyone else was getting into it. Not just the rest of the running world. Everyone. The mid-1990s gave us two new long-distance heroes. The first was Oprah Winfrey. If Frank Shorter inspired the first running boom, Oprah inspired the second, by running the Marine Corps Marathon. And it was a much bigger boom. This was not a spindly 24-year-old Yalie gliding through Old World Munich. This was a middle-aged woman hauling her flab around the District of Columbia. If Oprah could run a marathon, shame on anyone who couldn't.

When Oprah expanded the sport, she also lowered the bar for excellence. For the previous generation of marathoners, the goal had been qualifying for Boston. Now, it was beating Oprah. Her time of four hours and 29 minutes -- the Oprah Line -- became the new benchmark for a respectable race. (That was P. Diddy's goal when he ran New York.)

Once the supreme test for hardened runners, the marathon became a gateway into the sport. Soon, gravel paths were crowded with 5-mile-an-hour joggers out to check "26.2 miles" off their life lists. Team in Training, which raises money for leukemia research, promised to turn loafers into marathoners in 20 weeks. I met a lawyer who started running because, "They say if you can run a marathon, you can do anything!" The marathon was no longer a competition. It was a self-improvement exercise.

The guru of these new runners was an ex-music professor named John Bingham, who writes a Runner's World column under the handle "the Penguin." At age 43, Bingham took the admirable step of throwing away his cigarettes and signing up for a race. Unlike Bill Rodgers, he was not headed for athletic glory. He finished dead last. Bingham did not respond by training harder. Instead, he embraced his God-given lack of talent -- and urged readers to do the same. Absolving runners of the pressure to actually run was a brilliant feel-good message. Thanks to his book, "No Need for Speed," Bingham became the most celebrated marathoner in America. (If you don't believe me, go to the marathon starting chute and ask the runners if they've ever heard of Ryan Hall. Then ask about the Penguin.)

A few years ago, I had a chance to jog with Bingham, on Chicago's lakefront path. As we puttered along, a young man bounded past, with a kudu stride. "I call those 'nylon shorts guys,'" Bingham said, with a touch of disdain. "I could run in under four hours. But I don't want to. The price would be so high it's not worth it."

I just didn't get it. After my knee injury, I'd returned to the 5K. I pushed myself into the pain zone, puked after races, and fought my way back down to 20 minutes -- a far more satisfying feat than a four-hour marathon. I was doing all I could do, with what I still had. Yet here was a man whose legs would carry him 26 miles, and he was content to stop for walking breaks.

Like Oprah, Bingham deserves praise for luring insecure, overweight novices off their couches and into running shoes. He's also terrific for business. In the last 15 years, the Chicago Marathon field has increased tenfold, to 45,000. But with this change in the running culture, the average finishing time for men has dropped from 3:32 to 4:15 -- not far from the Oprah Line, or my own performance. Last month's Chicago Marathon had to be shut down mid-race, because undertrained five- and six-hour marathoners couldn't handle that much time in the 85-degree heat.

You can't just blame the Penguin Brigade for messing up the curve. The last year an American-born man won a major marathon? 1983. (We have produced one first-class female marathoner -- Deena Kastor has won in Chicago and London -- although we're still waiting for another Joan Benoit Samuelson, gold medalist at the first Olympic women's marathon, in 1984.) The running bum -- that post-collegiate dropout who works in a shoe store so he can train 100 miles a week -- has almost disappeared. Despite the fact that marathon fields are the size of Sauron's host, more guys broke two and a half hours in the 1980s.

"When the attitude simply becomes to finish, that attitude becomes pervasive," says an old marathoner. "The marathon was once this incredible challenge, to finish it and to finish as fast as you can. I just think there's a mind-set out there about the marathon, and it's a different mind-set from 25 years ago."

If the marathon is populist enough for everyone to pin on a number, it's also populist enough for everyone to kick ass. If you're running the New York City Marathon this weekend, remember, it's a race. True, no matter how hard you push, you're not going to win a gold medal. But maybe a kid in high school will, someday. If the pack can drag the best runners back, we can push them forward, too.

I'm ready to do my part. My bum knee just carried me through a half-marathon. Next spring, I'm going the full distance -- and I'm going to do it in the spirit of the first running boom, in under three and a half hours. I may even wear a cotton T-shirt and a sweatband.