Iraq taught us nothing

The U.S. establishment's acceptance of a possible war with Iran shows that the folly that led to Iraq still rules Washington. 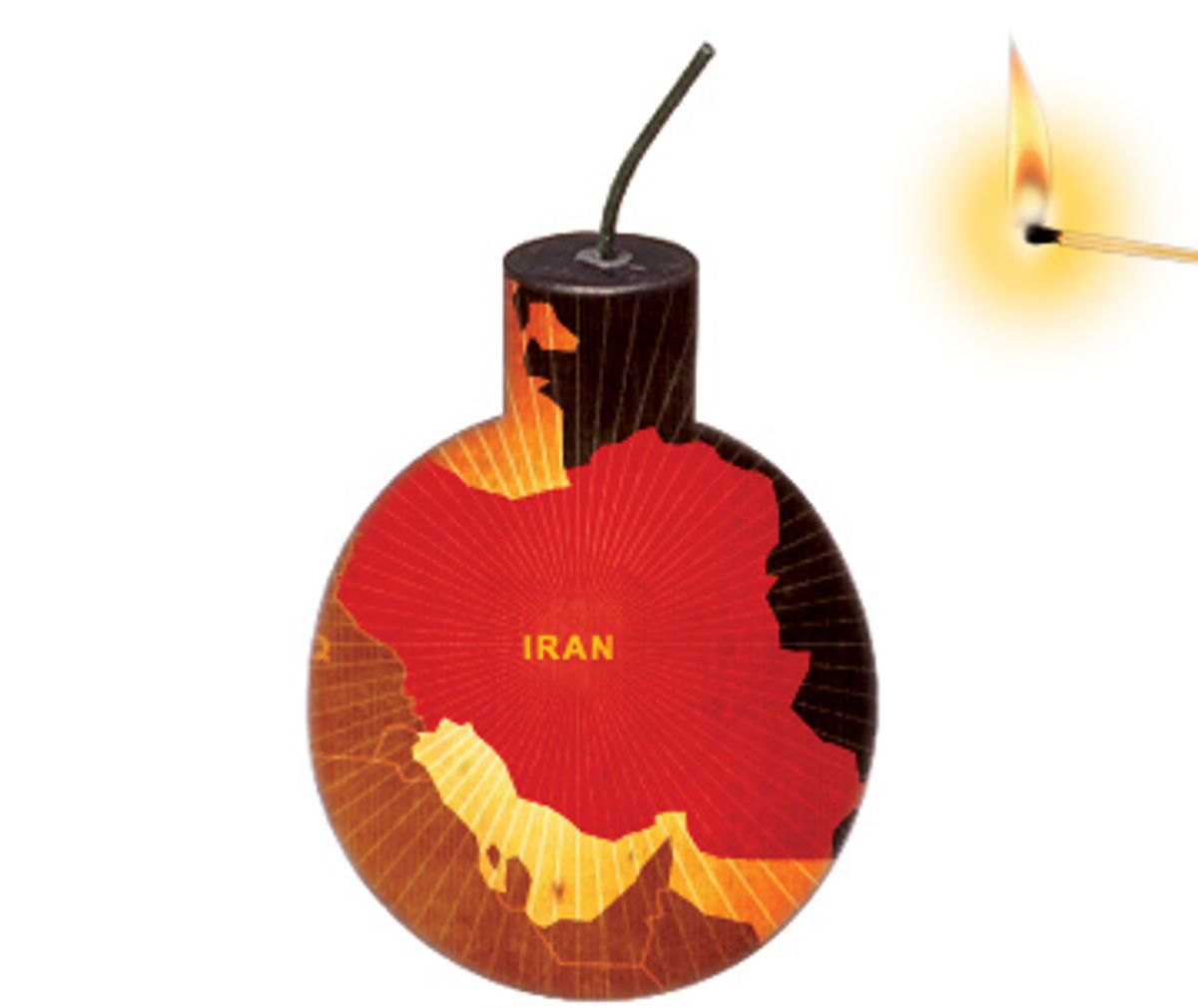 The U.S. could attack Iran in the next few months.

Let's repeat that. The U.S. could attack Iran in the next few months.

The fact that this sentence can be written with a straight face proves that the Iraq debacle has taught us absolutely nothing. Talk of attacking Iran should be confined to the lunatic fringe. Yet America's political and media elite have responded to the idea of attacking Iran in almost exactly the same way they did to the idea of attacking Iraq. Four and a half years after Bush embarked on one of the most catastrophic foreign-policy adventures in our history, the same wrongheaded, ignorant and self-destructive approach to the Arab-Muslim world and to fighting terrorism still rules establishment thinking.

The disturbing thing is that we have no excuse this time. Five years ago, a wounded, fearful and enraged America was ready to attack anybody, and Bush waved his red cape and steered the mad bull toward Iraq. We now know that was folly. The completely unnecessary invasion has so far resulted in the deaths of hundreds of thousands of Iraqis and almost 4,000 Americans, severely destabilized the region, cost billions of dollars, and increased the threat of terrorism. Yet today we are blithely considering attacking a much larger Middle Eastern country for equally dubious reasons, and mainstream politicians and the media are once again going along. The American people have signed off on the conventional "wisdom." In a recent poll, 52 percent of Americans say they would support attacking Iran to prevent it from acquiring nuclear weapons.

This is surreal. It's as if we're back on Sept. 12 and Iraq never happened.

Four related misconceptions continue to distort our Middle East policy: the terrorism freakout, the Satan myth, the they're-all-the-same fallacy, and the belief that we're innocent.

In many ways the terrorism freakout is our founding error, one that predates 9/11 by decades. Our obsession with terrorism, our failure to place it in historical context, our hypocrisy in defining it, and our overreaction to it have marred our ability to craft an intelligent Middle East policy. It has seriously deformed our response to the Israeli-Palestinian crisis (still the region's key conflict), provided much of the impetus for the Iraq war, and now is paving the way for possible war with Iran.

America's response to Palestinian terrorism has set the tone for our subsequent responses to the phenomenon. No one condones terrorism: It is morally repugnant to kill civilians, no matter how legitimate the terrorists' political goals may be. But by simply declaring that Palestinian terrorism was evil, and refusing to acknowledge or address the Palestinians' legitimate grievances, America long ago locked itself into a morally incoherent, historically obtuse and ultimately self-defeating position. As Robert Fisk noted in "The Great War for Civilisation," because of America's pro-Israel bias, it has always seen Palestinian terrorism as "comfortably isolated from reason, cause or history ... 'Terrorism' is a word that has become a plague on our vocabulary, the excuse and reason and moral permit for state-sponsored violence -- our violence -- which is now used on the innocent of the Middle East ever more outrageously and promiscuously." The uncomfortable fact is that Israeli-Palestinian crisis is the crucial frame through which America has always understood the Middle East: Palestinians were the first of a long line of Arab and Muslim supervillains. Once we ourselves suffered a massive terrorist attack, our atavistic rage at these evildoers knew no bounds -- and it was easy for the Bush administration to persuade us to attack Iraq.

Our overreaction to terrorism, combined with military triumphalism, found its supreme expression in Vice President Dick Cheney's notorious "one percent doctrine," which holds that if there is even a 1 percent chance that an enemy will acquire dangerous weapons, the United States must launch a preventive attack. As Iraq should have shown us, this doctrine is paranoid, delusional and self-defeating. (The doctrine is aptly named: It has a 1 percent chance of success.) Yet as the Iran war drums show, it still drives U.S. policy.

Hysteria about terrorism leads to a dangerous belief in the efficacy of military force. Of course U.S. forces can destroy any conventional adversary. But victory on the battlefield does not necessarily translate into foreign-policy success -- especially not in an asymmetric war, like the one we face in Iraq and would face in Iran if we sent in ground forces. In fact, as Iraq should have shown us, we should wage war in the Middle East only as an absolute last resort. The costs are much too high and the risks of unintended consequences (Turkey and the Kurds, the crisis in Pakistan) too great. "Toughness" makes a great sound bite for opportunistic politicians, but in the real world it strengthens our terrorist enemies and ends up getting Americans killed for no reason.

Next comes the Satan myth, which says that our foes in the Middle East are uniquely evil, irrational, motiveless and impervious to deterrence. Just as the United States has seen the Palestinians as evil anti-Semites, not as complex actors with some legitimate historical grievances, so we saw Saddam as insane and undeterrable -- and now are asked to believe the same thing about the mad mullahs of Iran. The terror attacks on 9/11, which were carried out by fanatics who really were impervious to deterrence, made the Satan myth practically untouchable. Lost in the rage and fear over the attacks was the fact that violent jihadists like al-Qaida are few in number and have almost no popular support. Claiming that Iraq, like al-Qaida, was part of an "axis of evil," Bush used the Satan myth to sell the war against Iraq. And it now provides the key support for a war with Iran. If Iran is an insane, fanatical, undeterrable state, the equivalent of al-Qaida, then if follows that we must consider attacking it to prevent it from acquiring nuclear bombs.

The myth of a demonic, irrational, powerful Iran has no basis in fact. Iran, as Juan Cole has pointed out, "has not launched an aggressive war against a neighbor since 1785 and does not have a history of military expansionism. Its population is a third that of the United States and its military is small and weak." Nor is it bent on fighting the United States or Israel to the death. Iran made a major peace offer to the United States in 2003, offering a comprehensive diplomatic settlement, including ending its support for Hamas and recognition of Israel, in exchange for normal relations. The Bush administration, smugly certain that it was about to get rid of the entire regime, refused to talk.

Nor is Iran undeterrable. It obviously has significant differences with the United States. But it is a rational actor, concerned like any other state to maximize its regional power and minimize threats to its existence. As Trita Parsi, author of the new book "Treacherous Alliance: The Secret Dealings of Israel, Iran and the U.S.," argued in a recent piece in the Nation, "a careful study of Iran's actions -- not just its rhetoric -- reveals systematic, pragmatic and cautious maneuvering toward a set goal: decontainment and the re-emergence of Iran as a pre-eminent power in the Middle East." This is why retired Gen. John Abizaid recently said that America could live with a nuclear Iran.

Under the specious heading of "Islamofascism," we have dangerously conflated completely different regimes and non-state actors -- this is the "they're all the same" fallacy. The Bush administration has aggressively promoted the idea that every Mideast state or militant movement that isn't on the same side as the United States or Israel poses the same threat as al-Qaida -- or simply asserted that those states are synonymous with al-Qaida, as the Bush administration did before the Iraq war. This is absurd and violates the first principle of both statesmanship and generalship: See the situation clearly and objectively. It leads to completely false assessments of entities like Iran, Hamas and Hezbollah, and leads us to make far more enemies than we need to in the Arab-Muslim world.

Iran has no more to do with al-Qaida than Iraq did. Iran sponsors Hamas and Hezbollah, which have employed terrorism, but their fight is with Israel, not the United States. If we attack Iran because it supports Hezbollah, we might as well declare war on Kurdistan because it abets the PKK's far more deadly guerrilla campaign against Turkey. By treating Iran, or national-liberation groups like Hamas, as if they were al-Qaida, the United States is making an elementary and quite dangerous category error.

The final error is our invincible belief in our innocence, which derives from our almost complete ignorance of the region's history and its people. Americans can entertain notions of marching smartly into some Middle Eastern country, killing a bunch of evil ragheads, fixing things up, shaking hands all around, and marching out because most Americans simply have no knowledge of Middle Eastern history or America's long and often shameful record of imperialist and colonialist meddling. Perhaps Americans might view Iran differently if more of them knew that in 1953, America and Great Britain overthrew their democratically elected leader and installed a bloody but pro-U.S. tyrant, the Shah. The 1979 revolution that brought Khomeini to power, and put Iran and United States on the collision course that has lasted to this day, was a direct result of that infamous coup (which we engineered because we wanted cheap Iranian oil). Neither Iranians nor anyone else in the Middle East has forgotten such matters -- why should they? Until we understand and come to terms with our often-ugly track record in the region, we will be doomed to play the part of Graham Greene's haplessly idealistic Quiet American, blundering into places we don't understand, not knowing why the natives don't like us, and making things infinitely worse.

There are not many indications that Americans, whether Democrats or Republicans, can break away from these persistent fallacies about the Middle East and terrorism. There are a few glimmers of hope, however. Sen. Barack Obama broke decisively with the establishment position last week, stating that if elected, he would "engage in aggressive personal diplomacy with Iran" without preconditions. Republican Sen. Chuck Hagel took the same position in a letter he sent to Bush calling for "direct, unconditional and comprehensive talks with the Government of Iran." And in a noteworthy column, ultra-establishment pundit Fareed Zakaria recently attacked the entire set of assumptions behind the campaign to whip up war fever against Iran. "The American discussion about Iran has lost all connection to reality," Zakaria wrote in Newsweek.

But the Democratic front-runner, Hillary Clinton, has not broken with the establishment paradigm. She has hedged her bets but not staked out a completely new course. And her refusal to do so means that the Democratic Party is failing to speak with one voice on the most important issue of our time. Until it does so, the paradigm shift that is so urgently necessary will not occur. Soon it may be too late -- either to prevent war with Iran or to find the will to break away from the ruinous assumptions that have left our Middle East policy in tatters.