The hip-hop icon's inspired new release, "American Gangster," is his best album in years -- and the best rap album of 2007. 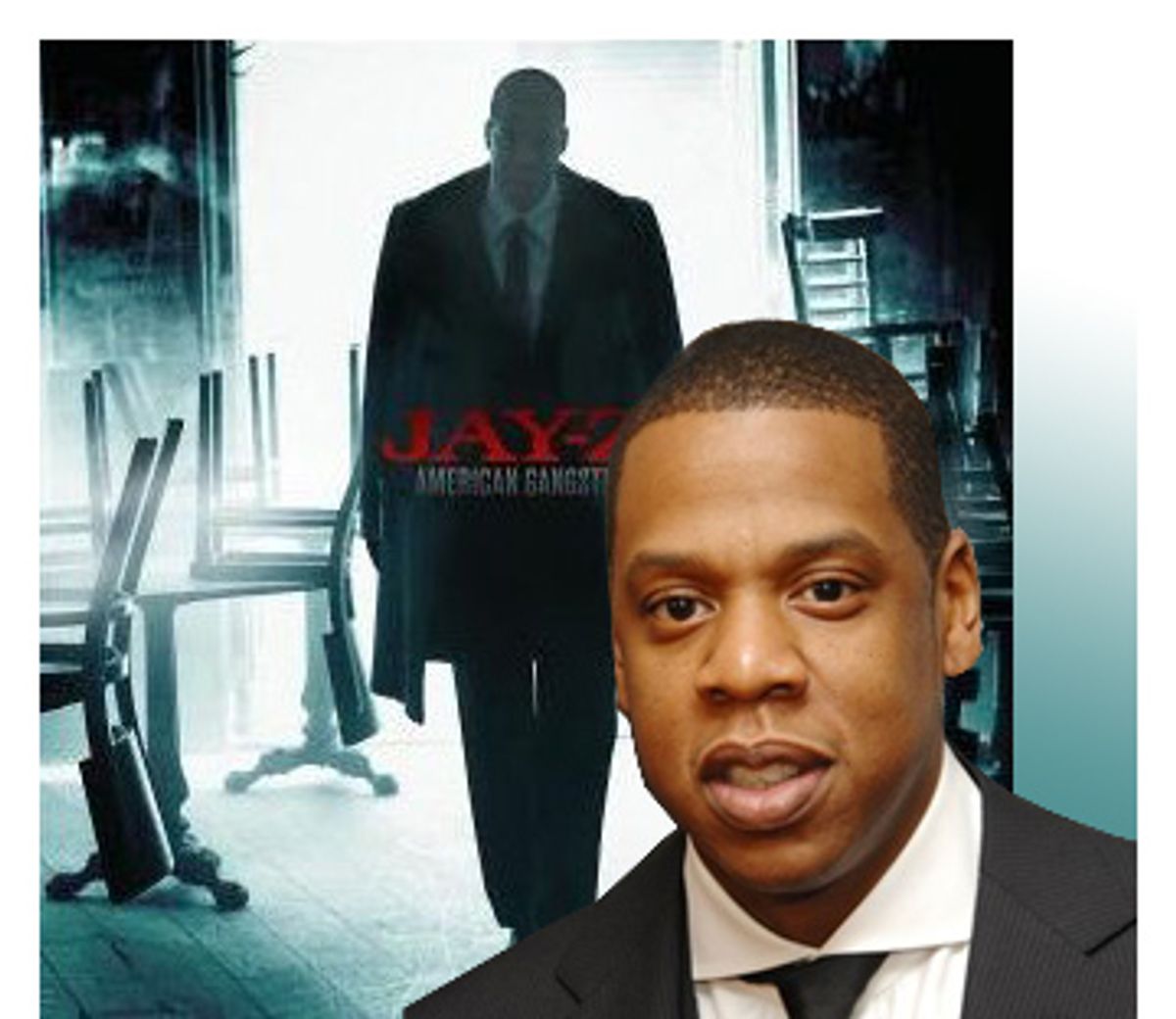 Five minutes into Ridley Scott's "American Gangster," a biopic on the rise to power of Harlem heroin dealer Frank Lucas, it becomes easy to see how Jay-Z would be so inspired by the film that he made an album, one with the cumbersome disclaimer "inspired by the motion picture." The film begins with the death of legendary gangster Bumpy Johnson. Johnson's funeral was a star-studded event, attracting luminaries in sports, entertainment and government.

It's easy to imagine a similar scene when Jigga's time is up. Once a dope dealer himself, Jay-Z is hip-hop's omnipresent figure, the commercial force in a genre that can't be discussed without its being referred to as a "commercial force." No genre is so capitalistic, so reflective of how free enterprise brings out the best and worst in people, so intrigued by its own hustle and the spoils that come with it. Considering Jay's the biggest star in that world, a star that stopped being hip-hop's exclusive property long ago, his funeral would probably be the stuff of Willy Loman's dreams.

However, the album that Scott's film has inspired, also titled "American Gangster," isn't a clichéd celebration of Jay's place in the game, as was his last LP, "Kingdome Come." Instead, it's a fresh, hungry record full of memories of Jay's upbringing in Brooklyn's Marcy projects and his pre-rap life in the trade of street pharmaceuticals. Its energy would make you think "American Gangster" was recorded by a young buck, if any one of the new crop of emcees could sound so legitimately self-assured. This is the album dedicated fans, the ones who fell in love with him on his classic debut, "Reasonable Doubt," have clamored for.

But delving beyond the superficial isn't what made Jay-Z a multimedia force. He reached that point by blatantly catering to listeners, always making music with an eye on the mainstream. His third album, the five-times-platinum "Vol. 2, Hard Knock Life," was an instruction manual for going from hood superstar to pop icon. It wasn't a soft record by any stretch, and it certainly had highlights. But it was so clear that Jay's goal was to chart instead of craft great, inspired songs that he might as well have put a copy of the marketing plan and specific "thank yous" to each target demographic in the liner notes.

It's hard to knock him for it, though. He has masterfully toed the line between dominating the marketplace and oversaturating it, cranking out albums annually and guest appearances almost weekly, by simplifying his music in exchange for commercial success. Jay admitted as much on his last record before "retiring" in 2003, "The Black Album." On the song "Moment of Clarity," he says, "I dumbed down for my audience to double my dollars/ They criticized me for it yet they all yell 'holla.'" And the world has yelled "Holla," "Hova," and everything else he told them to since 1996. The music could be boring, but Jay always got paid. Every album he has released is certified platinum.

"American Gangster" is Jay's first album that doesn't explicitly reach for success. As he says on the track "No Hook," "this is not for commercial usage." Gimmicks are few and far between. No song sounds like a single. There is no true "club banger" -- even though the catchy "Roc Boys" could be that song. "American Gangster" is hardcore hip-hop, unvarnished lyrics over brilliantly muscular '70s soul beats. The album's beat-makers, most notably Diddy's Hitmen and Jermaine Dupri (also pioneers in hip-hop's move toward the center), created a hybrid of the production Kanye West and Just Blaze gave Jay on his 2001 release "The Blueprint"; most of the tracks on "American Gangster" combine Kanye's gift for identifying fantastic melodies and Just's ability to stimulate subwoofers. Though absent on "American Gangster's" track list, the sonic architects of "The Blueprint" are there in spirit.

Where Jay takes his game to another level is selling the emotion of every song. He could always make flossing seem fun, but explaining the pains of the game hasn't always been his strong suit. Even "The Blueprint," Jay's most emotional album, wasn't totally sincere. That's not a problem on "American Gangster." "American Dreamin'" uses Jay's personal knowledge of a hustler's ambition to offer emotional solidarity to those stressing the struggles of the dope game. Jay's rhymes on "Success," which borrows an Eminem line on the hassles of prosperity for its title, are just as impassioned as the wailing organ No I.D. uses as the track's foundation (same goes for the track's guest, Nas). "Fallin'" is the closing lamentation of the worst parts of the game -- in the same vein as "Regrets" and "You Must Love Me," the last tracks on "Reasonable Doubt" and "In My Lifetime, Vol. 1." But unlike those older tracks, "Fallin'" is totally believable; it sounds like what's in his heart rather than what should be there.

The one song that seems out of place is "Ignorant Shit," which began as a leftover from "The Black Album." Its use of a sample of the Isley Brothers' "Between the Sheets" is a sharp deviation from the blaxploitation soundscape of the rest of the album, but it speaks about the essence of this album. If the album were a DVD, this song would serve as director's commentary. "I make some thought-provoking shit/ You question if he's falling off," Jay says on the track's intro. "I'm only trying to give you what you want/ Fuck, shit, ass, bitch, you like it, don't front," goes the hook. It's almost as if he's explaining why he's done on this record what he hasn't done since "Reasonable Doubt" -- craft an artistic statement instead of an appeasement of popular demand. Then, for good measure, there's a scathing verse on the unfair blame placed on hip-hop during the Don Imus controversy. "Are you sayin' what I'm spittin'/ Is worse than these celebretante's showin' they kitten/ You kiddin'?" Jay asks. "Let's stop the bullshittin'/ 'Til we all without sin, let's quit the pulpittin'."

If there is a misstep, it's "Hello Brooklyn 2.0," featuring Lil Wayne. Not that there's anyone that wouldn't want Weezy on his track, but considering that it has become almost obligatory in 2007 to have him on your album, it's the closest thing to mainstream capitulation on "American Gangster." And, perhaps not coincidentally, it's the weakest track on the album.

Finally, after publicly threatening to quit rapping at least twice, Jay-Z seems retired. It may seem counterintuitive to say that just as he's releasing his best album in six years. But "American Gangster" sounds like something Jay would do for free, even if no one were listening, even if no one were paying to hear it. He's saying what's on his mind, not what he thinks the world wants to listen to.

Jay-Z's "American Gangster" is the best rap album of 2007. Granted, there isn't much competition for the crown other than Kanye West's "Graduation," but Jigga has given the world a banger, an artistic statement from the man whose influence has done more to mute fresh, unbridled expression in the mainstream than anyone else.

It's a deviation from what we've come to expect from Jay-Z. It's what hip-hop fans, many of whom hate the paint-by-numbers affair rap music has become -- an affair Jay helped create -- have spent years hoping Jigga would record.

And it's certainly worth the wait.