"A vote for Romney is a vote for Satan"

Some members of the GOP's largest voting bloc, like Florida preacher Bill Keller, think a Mormon in the White House would mean more souls going to hell. 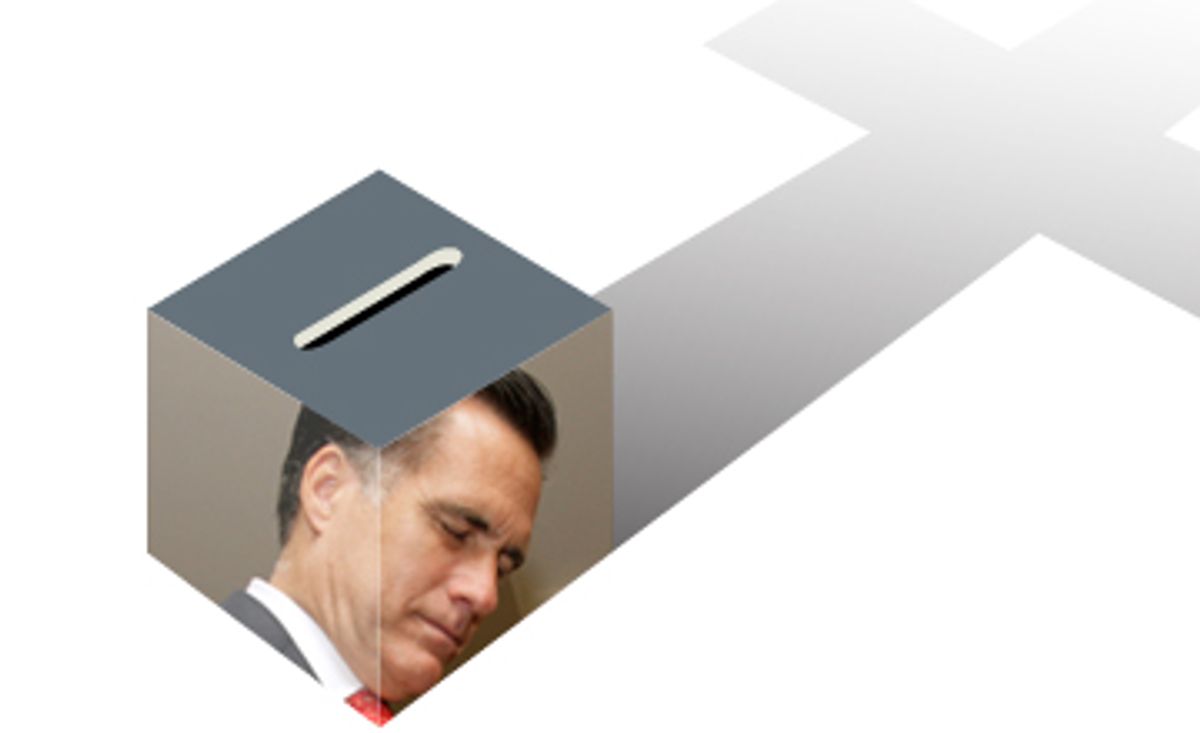 From the back room of a dilapidated used-car dealership, the televangelist Bill Keller has spent the past eight years battling to save the souls of men. In addition to his daily television broadcast in central Florida, his Web site, LivePrayer.com, has an e-mail list of about 2.4 million, and every day he says he receives some 40,000 electronic messages from people seeking the healing power of prayer to help their finances, health or relationships.

"It's kind of a mix between O'Reilly and Dr. Phil, but with a biblical worldview," Keller said of his ministry. When he met me late last month in his office, where the detached bucket seats of a compact car are the chairs, he was dressed in a red and black Michael Jordan tracksuit, with the zipper lowered halfway down his bare chest. At 49, he now keeps his hair peroxided platinum to hide the gray. "If people don't like what I say, go argue with God, don't argue with me," he told me. "I didn't write the book."

People often don't like what Keller says. A regional figure with national aspirations, he has called Oprah Winfrey a "new-age witch," the Koran "a book of fables," and the prophet Mohammed a "murdering pedophile," sparking a successful campaign by Islamic civil rights activists to get him kicked off the local CBS-affiliated TV station. But his passion is unabated, and in recent months, Keller has focused his biblical fire on a new target, Mitt Romney. Keller opposes Romney because the Republican presidential contender is a Mormon.

"A vote for Romney is a vote for Satan," Keller declared in his daily e-mail devotional last May. His reasoning went like this: Romney's election would serve as a giant advertisement for a competing religion, Mormonism, which Keller and others believe has falsely portrayed itself as another form of Christianity in an effort to find converts. "He would influence people to seek out the Mormon faith," Keller predicted of a Romney presidency. "They would get sucked into those lies and they would eventually die and go to hell."

Though Keller's rhetoric is extreme and his predictions are controversial, his biblical reasoning is mainstream for many of the nation's Christian evangelicals, who make up about 40 percent of the Republican Party. Large denominations like the Southern Baptist Convention have long considered Mormonism to be a cult, not a true path to salvation. National polling paints a stark picture of the problem. According to a recent Pew Center poll, 25 percent of Republicans say they are reluctant to vote for a candidate who is Mormon. Among white evangelicals who attend church weekly, 41 percent are reluctant to vote for a Mormon.

The Romney campaign, which has aggressively courted religious voters, is well aware of the problem. Romney has found himself, by dint of his personal faith, in the middle of a long-running competition between two rival evangelical faiths, each claiming the true word of God in the fight for converts. "It's Pepsi vs. Coke," said one Romney campaign aide, describing the differences between evangelical Protestants and Mormons. "But sometimes Pepsi and Coke have to team up to stop Starbucks from taking over the market." Starbucks, of course, represents secular America, which favors gay marriage, legal abortion and the minimization of religion in public life.

This is the reasoning that has allowed Romney considerable success in winning over many big-name evangelical leaders--focusing on values, not religious identity. But others have revolted. "The Jesus and God of the Book of Mormon are not the Jesus and God of the bible," explains Dr. Robert Jeffress, who pastors the 10,500-person First Baptist Church in Dallas. At a sermon in September, Jeffress warned that people risk damnation if they mistake Romney's faith for the true Christianity. "It is a big deal if anybody names another way to be saved except through Jesus Christ," he said.

Jeffress shares Keller's concern that a Romney presidency could promote Mormonism, adding credibility to the thousands of Mormon missionaries who go door to door. "It could legitimize it," said Jeffress in an interview. However, he also said he could see a situation in which he voted in a general election for Romney. The evangelical dilemma in the 2008 election, he said, may well come down to the choice between "an incompetent believer and a competent infidel."

Janet Folger, the founder of Faith2Action.org who helped organize a recent Values Voter Debate in Florida, says she has spoken to many other Christian leaders who fear that the Church of Jesus Christ of Latter-day Saints will exploit a Romney candidacy. "They are using it as a recruitment tool right now," she said. "We are talking about some real core values of the Christian faith."

In response to the growing backlash against Romney, a wide variety of religious and political leaders, including Richard Land of the Southern Baptist Convention and Romney supporters like Rep. Tom Feeney of Florida, have publicly advised Romney not to discuss theology on the campaign trail. They have told him to further refrain from describing Mormonism as a legitimate form of Christianity. "Talking about values is a winner," Feeney said in an interview with Bloomberg News, "talking about theological stuff is a no-no."

Romney appears to have responded to the concerns. On the campaign trail, he has largely refrained in public from repeating the comments he made in October 2006, when he reportedly told a private group of evangelical leaders, "I accept Jesus Christ as my personal Lord and savior." In a recent appearance on Fox News, Ann Romney, the candidate's wife, declared that Mormonism was "a faith based on Christ, and it's a faith based on very Judeo-Christian principles." In the same interview, Mitt Romney declined to pursue her point. Instead, he tried to assure viewers that he would, like the Catholic president John F. Kennedy, consider his oath of office as among "the highest promises" he had "made to God."

Other leaders have appealed to evangelicals to judge Romney by his plans to further the Christian agenda, not the theological tenets of his personal belief. "I think it's thin ice for us as a movement to start making theological judgments about somebody else's faith on Election Day," said Gary Bauer, "because we are asking the country to not do that when it comes to evangelical candidates who run." Bauer ran for the Republican presidential nomination as a social conservative in 2000 and now heads the group American Values. Similarly, Tony Perkins, who runs the Family Research Council, has advised Romney to continue to avoid the religious pitfalls. "I don't know that he has to got to talk about his religion," Perkins said. "I think he needs to continue doing what he is doing, and that is to stake out clear policy positions that connect with values voters across the country."

Others like Robert Taylor, the dean of Bob Jones University, a religious school in South Carolina that teaches that Mormonism is a cult, have come out to endorse Romney. "I have not seen any time in the past where a president has taken advantage of the presidency to promote his particular faith," Taylor explained of his decision. "We can look at the man. We can look at his values." Nonetheless, Taylor says he understands the concerns of his friends who worry that a Romney presidency could lead to more Mormon conversions. And he adds that if Romney did begin to speak about his religion as a legitimate form of Christianity from the stump, "that would make it very different."

Back in the Tampa used-car lot, there was no debate. Keller, the televangelist, remained convinced that a Mormon president will lead to more lost souls. And his fury is no longer just directed at Romney. He calls those Christian leaders who support Romney "Judases" and clowns. "They all come back and say, we're looking for the best president. He's the commander in chief, not the pastor in chief, blah blah blah," Keller said. "What they have done is, they have totally dismissed the fact that this guy's influence is going to lead people to hell."

For Keller, the ministry is all in the numbers. By his own estimate, he has saved hundreds of thousands of souls through his Web site, e-mails and call-in television program, which is set to return to a national broadcast in January. It's a quest that began for him in federal prison, where he was sentenced in 1988 to 30 months for insider trading. There, he rediscovered religion and began taking correspondence courses through Jerry Falwell's Liberty University. Ever since, he has been "literally battling for the souls of men, 24/7, 365." It's a journey that took him, for a time, into the world of big-money televangelism, onto Fox News and the Howard Stern show, and to countless mornings at 3 a.m., when he usually writes his daily e-mail devotional.

So Keller's crusade against Romney makes sense in a way, though it only matters if others follow his lead. The question that remains is how much the rank-and-file Bible-believing evangelicals choose to use religion as a litmus test when they go to the polls. The question is whether evangelical voters choose to make the 2008 election about the future on earth or the future in eternity.