Democracy for Pakistan was never the deal -- and as Musharraf's latest power grab throws his nation into turmoil, Bush will gladly go along. 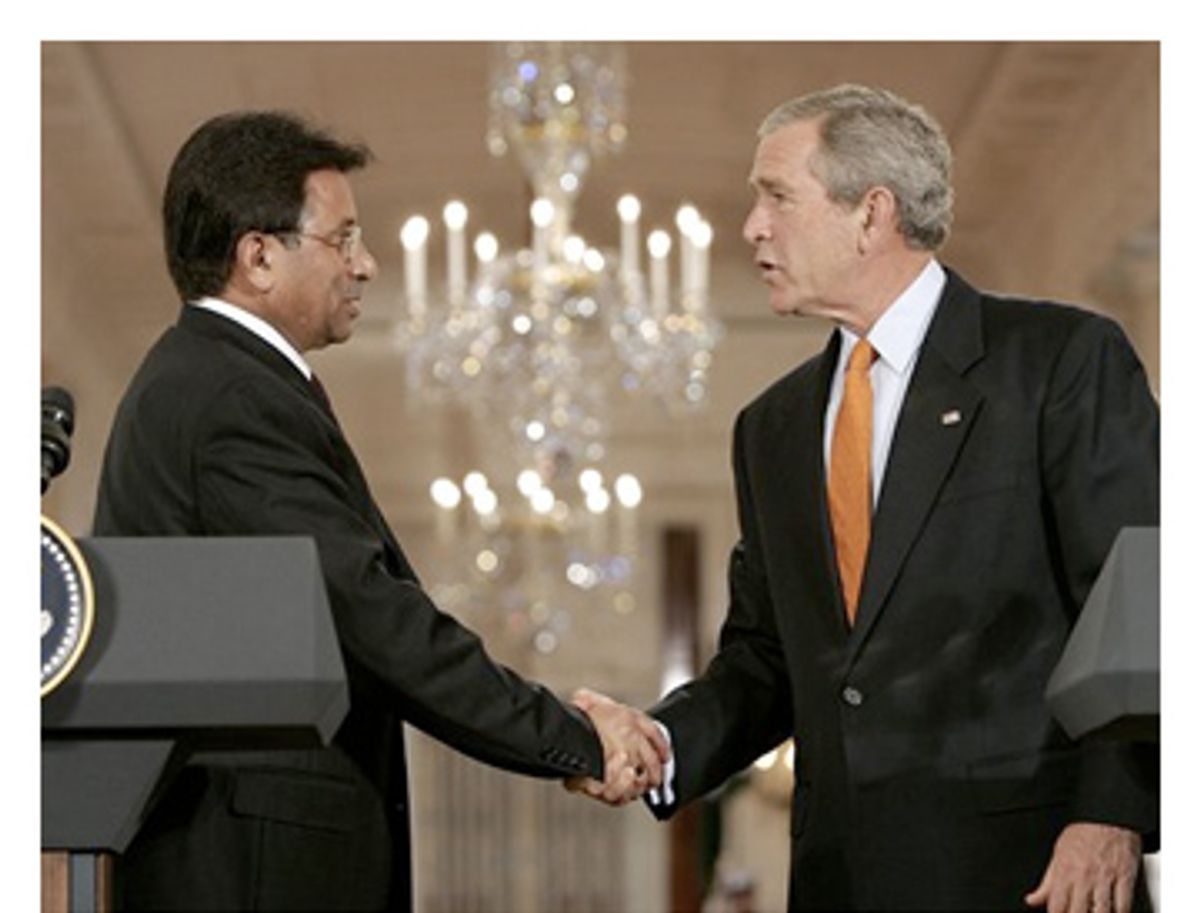 In the fall of 1999, as he campaigned for the presidency, George W. Bush was asked by a reporter to name the leader of Pakistan. Bush could not. He famously replied: "The new Pakistani general, he's just been elected -- not elected, this guy took over office. It appears this guy is going to bring stability to the country, and I think that's good news for the subcontinent." Although Bush didn't know Gen. Pervez Musharraf's name and was confused as to how he got into office, the soon-to-be American president was sanguine about the anti-democratic developments in Pakistan.

More than seven years later, Bush's illusions about Musharraf -- and any illusion of democracy in Pakistan -- have been shattered by the dictator's declaration of a state of emergency. Tantamount to a coup, Musharraf's actions on Saturday have not only thrown Pakistan into turmoil but have also revealed the hypocrisy of Bush's foreign policy, including the proclaimed goal of fostering freedom and the rule of law in the Muslim world.

At a press conference on Monday, Bush said of the weekend coup, "We expect there to be elections as soon as possible." But while Bush admitted that Musharraf's actions would "undermine democracy," he insisted that the general is "a strong fighter" in the war on terror. That dual message was accompanied by the American president tepidly declining to say what he would do if Musharraf did not move toward elections. Also revealing was the fact that Bush had sent the weakest member of his team, Secretary of State Condoleezza Rice, out to warn Musharraf against the coup, indicating how little he was in reality worried about it. If he had been deeply anxious, he would have called the general himself. Many observers are viewing Musharraf's coup as a major setback for Bush's policy, but in fact it changes almost nothing.

Although the United States has given some $11 billion to Pakistan (mostly in military aid) since 2001, Bush needs Musharraf more than Musharraf needs the United States. The war in Afghanistan is a key reason: A major proportion of the war materiel for the 20,000 U.S. troops, and additional 20,000 NATO troops, in Afghanistan (a landlocked country) goes through Pakistan. U.S., British and Canadian troops on the front lines fighting a Taliban resurgence could be endangered if Pakistan were to cut off the flow of those supplies. On Monday, Rice appeared to back off from earlier warnings to Pakistan that a coup would jeopardize U.S. aid, saying that she doubted cooperation on the war on terror would be affected by Musharraf's actions.

Musharraf, who was brought up in part in Turkey and is representative of the secular stratum of Pakistan's middle class, is the Bush administration's ideal ally. They point to his successes: Musharraf has moved a lot of fundamentalist officers out of positions of power, removing them from any authority over the country's stockpile of nuclear bombs. Under his rule, Pakistani military intelligence has captured nearly 700 al-Qaida operatives in that country, including high-value figures such as Khalid Sheikh Muhammad, the mastermind of the Sept. 11 attacks. And Pakistani cooperation was key in breaking up a plot in summer 2006 by Britons of Pakistani heritage to blow up airplanes flying from London to New York.

But the 1999 interview revealed Bush's true stripes regarding the Pakistani dictator, and his knee-jerk support for authoritarianism over democracy. Bush was criticized then for applauding the overthrow of the democratically elected Nawaz Sharif government in the Oct. 12, 1999, military coup. His spokesperson at the time, Karen Hughes, said that Bush was encouraged by Musharraf's promise that he would hold early elections, restore "stability" to Pakistan, and ease tensions between India and Pakistan. (In fact, Musharraf had been a notorious hawk on India and may in part have carried out the coup because he saw his civilian predecessor as too dovish toward New Delhi.) What the world did not then know was that President Bill Clinton had negotiated a deal not long before with Prime Minister Sharif whereby Pakistan would deploy special operations troops to capture Osama bin Laden. When Musharraf took power in fall of 1999, he refused to honor the deal, since the operation was unpopular with the military's fundamentalist officers. Indeed, Bush was supporting a man who derailed the best chance the Clinton administration may have had to prevent Sept. 11.

Bush went on, of course, to talk a good game as president about democratizing the Middle East, but that never appears to have been more than a cover story for his projection of American power into the region. And now he is standing by Musharraf as the latter dismantles the façade of civil society institutions in Pakistan.

Two crises pushed Musharraf to act. The first was an increasingly assertive Supreme Court, which successfully fought back against the general's attempt to dismiss its chief justice, Iftikhar Muhammad Chaudhry, last spring. The Supreme Court appears to have been planning to declare Musharraf ineligible to hold the post of president, to which he was recently reelected by Parliament.

The second major crisis was the conflict between Musharraf and Muslim radicals. The United States had pressured him to crack down on the Muslim hard-liners of the northern tribal areas, who the United States alleges gave haven to al-Qaida operatives and protected training camps used to prepare terrorists to strike the West. But the vast, rugged territory had defeated the British Empire's attempts to secure it, and Musharraf was not making better progress. In September 2006, he concluded an accord with the chieftains of the tribal areas, which some saw as a capitulation to the radicals. In spring and summer of 2007, Musharraf was faced with an insurgency in Islamabad's Red Mosque complex, which he crushed with some brutality in July. Although the militants were not popular in most of the country outside the Northwest Frontier Province, where many of the madrassas, or Muslim seminaries, are located that produced the Taliban, no one liked seeing a mosque invaded and seminarians killed (even if the latter were armed and dangerous).

The twin crises reduced Musharraf's legitimacy in Pakistani society to something near zero, and Washington swung into action. Rice called Musharraf repeatedly this summer, urging him to allow exiled former Prime Minister Benazir Bhutto -- dismissed for corruption at the end of both of her previous terms (1988-1990 and 1993-1996) -- to return to the country. As a secularist who opposes the Muslim extremists, Bhutto could have hoped to shore up the legitimacy of Musharraf's efforts against them. As the leader of the popular Pakistan People's Party, she has substantial grassroots support. The general eventually acquiesced, and Bhutto returned on Oct. 18, though the massive bombing that greeted her arrival at Karachi brought into question whether she could restore stability.

For the Bush administration to whitewash authoritarian rule as a promise of democracy in Pakistan is nothing new. After Sept. 11, then Secretary of State Colin Powell used a mixture of threats and pledges of aid to force Musharraf to turn on the Taliban in Afghanistan, which had been a pet project of the Pakistani military. In January 2002, Musharraf banned a number of militant Muslim groups whose members had been trained in the Taliban terrorist camps that also produced the Sept. 11 hijackers. America's new ally could hardly show his true face as a mere military dictator, so on April 30, 2002, Musharraf held a referendum on whether he should become "president." Since he was not running against any rival, it was impossible for him to lose this referendum, and voter turnout was low. Bush remained silent about the charade, and a low-level state department official declared it an "internal Pakistani matter."

In fall 2002, Musharraf held stage-managed parliamentary elections, in which he interfered heavy-handedly in the campaigning. He was attempting to throw the election to the only civilian party that supported him, the Pakistan Muslim League Qaid-e Azam (PML-Q), called in Pakistan "the king's party." In fact, Musharraf's maneuvering could not give the PML-Q a majority, since the Pakistan People's Party of the then-exiled Bhutto and the Pakistan Muslim League Nawaz (PML-N) of deposed Prime Minister Nawaz Sharif showed some resilience.

What Musharraf's interference did accomplish was to give an opening in the Northwest Frontier Province and Baluchistan for a six-party fundamentalist Muslim coalition, the Islamic Action Council, to take power. The key components of the Islamic Action Council included the Jamaat-i Islami, led by Qazi Hussain Ahmad, and the Clerical Association of Islam of cleric Fazlur Rahman -- who had trained many of the Taliban leaders. The council also took about a fifth of the seats in the national Parliament, an almost unprecedented good showing, since most often the fundamentalist parties got less than 3 percent in Pakistani elections. American pundits ill-informed about Pakistan are tempted to support dictators such as Musharraf because they distrust the Pakistani electorate. But when allowed to participate in relatively free elections, Pakistani voters have usually backed moderate leaders and ignored the fundamentalists.

Musharraf's latest seizure of power shows that little has changed in Pakistan since October 1999. Through thick and thin, Bush has stood by "the general" in Islamabad whose name he at first could not remember, the guarantor of "stability." It is predictable that Washington will go on supporting the dictator, even though Musharraf's doffing of the faux trappings of democracy in Pakistan has pushed the press corps to pose sharper questions than normal to Bush about this apparent hypocrisy.

But Pakistan's military is the linchpin of Bush's policies in Afghanistan and in the no-man's land of tribal Pakistan. Faced with choosing between an ignominious rout in the region from which the Sept. 11 plot was launched, and perhaps even the fall of the Kabul government to a resurgent Taliban, or otherwise having to suffer criticism for hypocritically backing a military dictatorship, Bush will mouth some polite phrases about the prospect of elections in the future (as he did in 1999), and go on providing for Islamabad's military machine. Aside from the cancellation of some ineffectual debates in a weak Pakistani Parliament -- and the end of the illusion that any vestiges of democracy remain -- nothing will change.