Now that Giuliani has embraced Pat Robertson's endorsement, the mayor should have to answer for the preacher's extremism and outright loony talk. 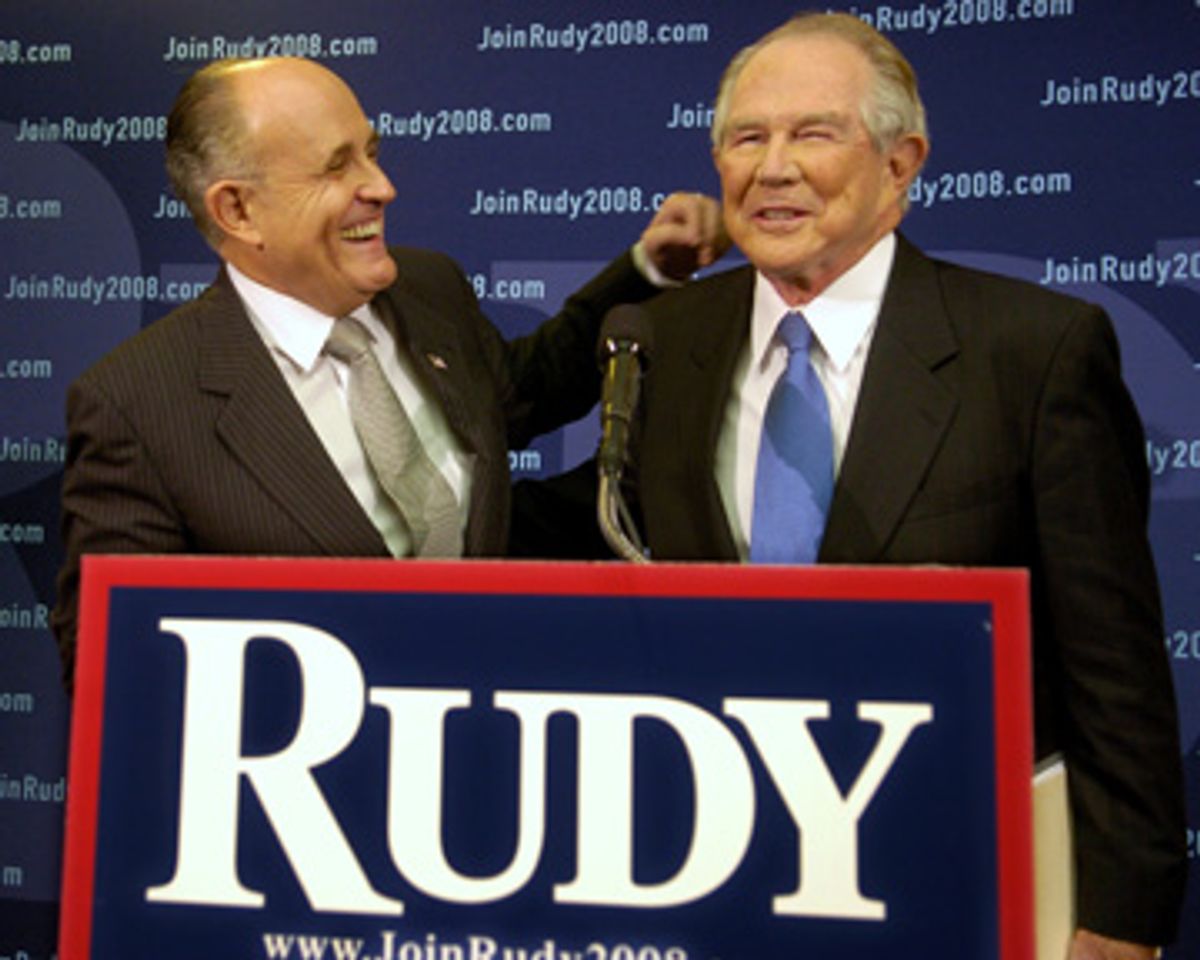 Whether Pat Robertson's endorsement will advance or impede the presidential ambitions of Rudolph Giuliani cannot be predicted with any confidence. The old huckster from Virginia Beach remains a vigorous presence in Christian broadcasting and certainly is among the most widely known preachers in America, even though his Christian Coalition is defunct. By discarding the supposedly sacred principles of his movement to support a twice-divorced, suspiciously liberal and lapsed Roman Catholic candidate will only encourage Robertson's critics to highlight his hypocrisy.

Such opportunities may be irresistible to his rivals, most notably James Dobson, the Focus on the Family leader whose denunciation of Giuliani may well have provoked Robertson to endorse the former mayor.

If Robertson's primacy among fundamentalist leaders is debatable, however, his reputation for extremism and outright loony talk is not. That's why listening to Giuliani accept the Robertson endorsement with praise for the preacher's judgment was so jarring.

"Having him aboard gives us a great deal of confidence because he has a tremendous amount of insight into what the main issues are and how they should be dealt with. His advice is invaluable and his friendship is even more invaluable," said Giuliani, who went on to add that they don't agree about everything. He probably doesn't agree, for example, that Robertson possesses the power to turn away hurricanes or cure sick people who donate money to the 700 Club. He probably doesn't agree that 9/11 and Hurricane Katrina were heavenly punishments for the sinfulness of American society, and of abortion and gay rights in particular, as Robertson has implied more than once. He probably doesn't agree, as Robertson once suggested in a bestselling book, that the first President Bush was an unwitting instrument of Lucifer. And he probably doesn't even think that we should abolish Halloween, as Robertson once insisted, because it is a "satanic" holiday.

But there are more serious questions to be addressed here. So now that Robertson is officially "on board" as an advisor to Join Rudy 2008, perhaps we should ask the would-be president to explain exactly where he and his new best friend agree -- and where they don't. The easiest way to begin is for the press to examine a few of Robertson's more incendiary remarks over the years, and ask Giuliani whether they reflect his own current views.

When Giuliani talks with Robertson about the kind of judges he would appoint to the federal bench, do they discuss separation of church and state? Robertson has often stated his firm opinion that the Constitution provides no such separation, despite the clear language of the First Amendment barring an establishment of religion and the even clearer language of Article VI prohibiting any religious test for holding federal office. "That was never in the Constitution, however much the liberals laugh at me for saying it; they know good and well it was never in the Constitution!" Robertson ranted. "Such language [separating church and state] only appeared in the constitution of the Communist Soviet Union."

When he was running for president himself 20 years ago, Robertson clearly stated that he would bar the appointment to any government position of any citizen who was not either a Christian (and that doesn't include Methodists, Episcopalians or many other denominations he considers to be "anti-Christ") or an orthodox Jew. Hindus, Muslims and atheists, among others, would be out.

"The Constitution of the United States is a marvelous document for self-government by the Christian people," he once said. "But the minute you turn the document into the hands of non-Christian people and atheistic people they can use it to destroy the very foundation of our society. And that's what's been happening."

From Robertson's perspective, of course, supporting Giuliani means supporting the war on terror -- or as Giuliani calls it, the war against "Islamic terrorists." Having denounced Islam as an evil religion many times on his television program, Robertson no doubt appreciates his candidate's insistent repetition of that provocative phrase. But does Giuliani agree that Islam is "not a religion of peace" and that Muslims are bent on world domination, making a "holy war" between Islam and Christianity inevitable, as Robertson insists? Does he agree with Robertson's assertion that Osama bin Laden "may be one of the true disciples of the teaching of the Quran"? If so, that would represent a significant departure from current U.S. policy, to say the least -- although it would also reflect the views of other kooky Giuliani advisors, such as neoconservative Norman Podhoretz.

Both Giuliani and Robertson have supported the war in Iraq, although the preacher's enthusiasm has waned from time to time. But does Rudy agree with Pat's remark a couple of years ago that criticism of the "commander in chief" in wartime "amounts to treason"?

Typically, the Washington press corps treated the Robertson endorsement purely as a question of horse-race politics, seeking to analyze its impact on the primary and general elections. But now that he has made his choice, Robertson's own controversial record and its implications for Giuliani's candidacy should not be ignored.