Robert Redford rips into the media, the government and our own liberal passivity in this remarkably rousing film. 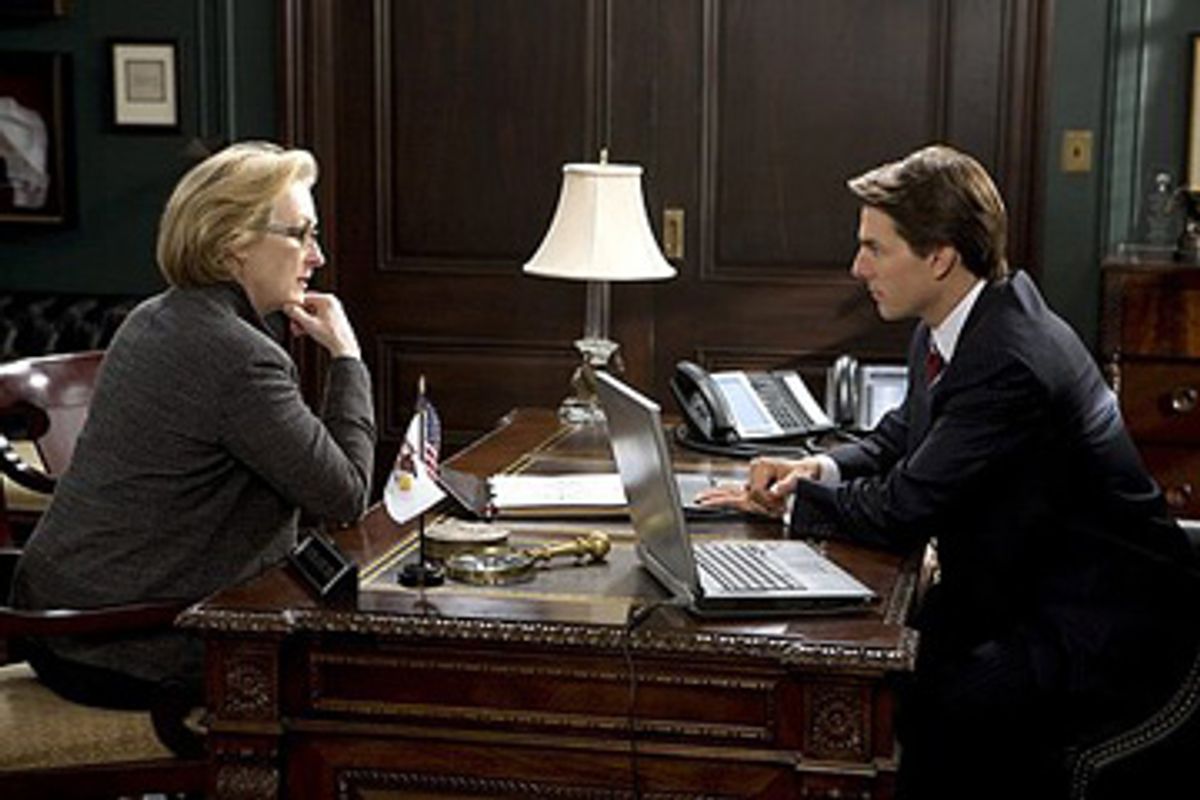 "Lions for Lambs" is just about everything I hate in a movie: It's self-righteous, didactic, dramatically and visually static and, in places, extremely boring. But I found myself thinking about it for hours, even days, after I saw it, which is more than I can say for most of the politically themed fiction movies -- "In the Valley of Elah," "Rendition" -- that have trickled quietly into and out of theaters this fall.

"Lions for Lambs," I'm afraid, is destined for the same kind of trickling. This isn't so much a movie as an impassioned plea -- on the part of director Robert Redford and writer Matthew Michael Carnahan -- to think about the nature of citizenship, to think about what it means for anyone, on the right, the left or anywhere in between, to serve his or her country. The idea of "serving our country" is almost always used in a military context. But one of the things "Lions for Lambs" strives toward is finding a new frame of reference for that phrase. All of the movie's characters -- two soldiers, close friends, stationed in Afghanistan; an oily Republican senator and the wily journalist who spars with him; a history professor who's trying to jolt one of his most promising students out of his cocoon of privileged complacency -- have to work out the phrase's meaning on their own. That each comes up with a different answer is the point. Whatever the movie's flaws are, it has at least a modest grasp of the sprawling mess we call democracy, which Winston Churchill called the worst form of government, except for every other.

Tom Cruise plays Sen. Jasper Irving, a beaming crocodile in an expertly tailored suit who has invited veteran TV reporter Janine Roth (Meryl Streep) into his office to spoon-feed her a news story about a secret military mission about to take place in Afghanistan. Actually, it's already a done deal. When she asks, "So when does it start?" he replies, "Ten minutes ago," a response that's a command masquerading as a suggestion: She'd better find a way to sell the initiative to the public, because there's no rolling it back. He's got her in his pocket -- not one of the roomier ones, but the tight little watch pocket on his waistcoat -- and even though she goes through the motions of tangoing and sparring with him, he knows it. The network she works for -- like every network -- cares more about profits than about actual news. In the midst of that, Roth pretends that she's hung onto her principles, but Irving knows, even better than she does, that she's really just hung them out to dry and wither. (Cruise's performance here is interesting, if not good, and the movie doesn't cast him as a cut-and-dried villain: He's a nightmare right-wing version of John Edwards, as if Edwards' casual likability and lawyer's showmanship had been turned up several notches to a blinding level of brightness. And Cruise is simply well-suited to play a slick politician: This is one area where being a grown man with blazing-white chipmunk teeth is an asset.)

"Lions for Lambs" tells three interlocking stories: While Sen. Irving and Roth engage in their semi-flirtatious battle of wits, two soldiers stationed in Afghanistan, Ernest Rodriguez and Arian Finch (Michael Peña and Derek Luke), prepare themselves to be deployed on the mission Irving has so casually outlined from the safety and comfort of his office. And over on the West Coast, at a university whose idyllic setting seems better suited to a holiday than to hard work (through the windows, we can see palm fronds outside), professor Stephen Malley (Redford) meets with one of his brightest students, Todd Hayes (Andrew Garfield), a kid who's aced all his exams but who, by the twilight of the semester, has bothered to show up for only eight classes.

The university scenes -- most of them take place in Malley's office, between those two characters, although another, even more dramatically satisfying one, is set in a classroom -- are the backbone of "Lions for Lambs," maybe because they provide the best stage for Redford and Carnahan to explore the distance between privileged students (many, though not all, of whom are white) and the kids who have volunteered (either out of a desire to serve, a lack of opportunity at home, or probably, in many cases, both) to fight in the Middle East. I use the word "stage" for a reason: "Lions for Lambs" is more like a play than a movie. Its ideas spill out line after line in the characters' dialogue; this is a movie dense with ideas and low on action. If it were a stage play and not a movie, your well-informed, culturally astute friends -- those who can afford to spend money on such things -- would see it, love it and come back and tell you that you must see it, which, of course, you wouldn't. (I wouldn't, either.)

But the didacticism of "Lions for Lambs" is so straightforward that it's almost audacious. Redford -- whose last movie was "The Legend of Bagger Vance," in 2000 -- has dared to make a movie that's pretty much just talking. In fact, the movie goes astray when he tries to get too fancy: It's overkill when we see American flags, and the mournfully tidy white tombstones of Arlington Cemetery, reflected in a car window as the character inside ponders numerous doubts and failings. And when Redford's professor Malley tells Hayes, in fiery tones, "Rome is burning, son! ... The problem is us, all of us," I shrank in my seat. No screenwriter should ever write lines like that for an actor, and barring that, no director should ever ask an actor to utter them. But here we have Redford directing himself, and he simply seems not to know better.

That's the sort of clumsiness you have to put up with in "Lions for Lambs," but it's not enough to disperse the picture's intensity. The movie may use a lot of words, but it doesn't mince them, and its very directness is a relief. It's all well and good for Jake Gyllenhaal, in "Rendition," to look pained as he watches an innocent man being tortured -- but he'd damn well better look pained, hadn't he?

So many of the current crop of topical movies tiptoe up to an ultimate revelation that could be summed up as "We're in a complicated situation" or "America is in crisis." Both of which are, of course, much more acceptable revelations than, say, "Whatever we're doing, God is on our side" -- although, ultimately, they may be just as smug and self-congratulatory, accomplishing nothing. While these other movies do nothing more than stroke our good liberal beliefs, "Lions for Lambs" attempts to claw at that placid surface. Its most arresting moment is a flashback in which Malley describes to Hayes a class project undertaken by two of his former students, a project the young men first presented in the classroom and then took outside it. These students are passionate, bright kids, and the plan they propose (and later put into action) is the pivotal polemic that the movie turns on. Some viewers may scoff at this dramatic device, saying, "No real-life kids would ever do that." Then again, isn't that initial surge of disbelief key to a polemic?

In addition to "Lions for Lambs," Carnahan also wrote "The Kingdom," an action picture set in Saudi Arabia in the aftermath of a terrorist attack. That movie has some flaws: Chief among them, it skirts the question of whether we should be using recent, real-life terrorist attacks as the basis for action movies. But it also has some surprising layers of complexity, and far from being a rah-rah-America exercise, it pretty clearly decries our administration's hubris in the Middle East.

"Lions for Lambs" -- the title refers to the admiration German officers felt for English grunts during World War I, while viewing their commanding officers as cowardly buffoons -- suggests that the flashes of intelligence in "The Kingdom" weren't a fluke. This is a weird movie hybrid, both a tasteful picture and an angry one. It's certainly critical of the media: At one point Sen. Irving jabs at Roth, urging her to think back on the days when her job was to report on real news, rather than just serve corporate interests. He bluntly teases her about one of the network's anchors, wondering aloud if "Summer Hernandez Kowalski" could possibly be a real name.

Later, we get a glimpse of this Summer person delivering a "newscast" about a pop star returning from rehab, or some such. Sure, it's an obvious gag. But do we see any of the major network news shows altering their format and delivery so it's smarter, more probing, more skeptical? (On "Larry King" this week, when Redford was asked if "All the President's Men" had had an effect on journalism, he said, "Apparently not.")

In the face of a news media that "sells" our government to us instead of urging us to question it, a blunt little picture like "Lions for Lambs" isn't such a bad thing. Redford and Carnahan clearly intend it as a call to arms, which explains why the movie sometimes feels like a civics lesson, albeit one given by a moderately entertaining instructor. Still -- like a good civics lesson -- the picture adamantly spins out questions rather than answers. Its characters take action for reasons that belong to themselves. We may not like their reasons or approve of their actions, but we can't deny that they've met the challenge of citizenship in a way they've mapped out for themselves.

"Lions for Lambs" doesn't for a minute treat good citizenship as an easy or certain enterprise. It's easy to live up to diminished ideals; the hard part is rising to the lofty ones. Thanks to the imperfections of democracy, we'll never be able to live in the perfect country of our dreams. That's all the more reason to act like citizens of it.